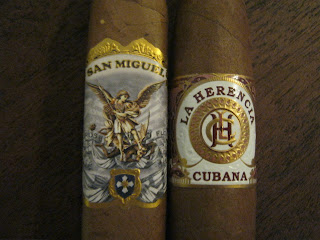 Today, I am going to talk about one of my favorite wrappers, Ecuadorian Sumatra. Yesterday I had two smokes that are made with the same wrapper, and it was halfway in the second one that I thought I should talk about it. The Sumatra seed originated in Sumatra, and eventually moved to Ecuador, where it has become incredibly popular. Ecuador provides optimum weather conditions for growing wrapper tobacco, and Sumatra succeeds in the soils of Ecuador. The seed has also been grown in Cameroon, in Western Africa, and now has taken the name of Cameroon instead of Sumatra. The wrapper can be very toothy or silky depending on how it is grown and has a natural sweetness to it which it imparts in the flavor of the cigar. It is really a great wrapper and cigars covered with it I tend to find are very creamy, peppery, sweet, and woody. I have listed some of my favorite Ecuadorian Sumatra wrapper cigars below, and hope you have the chance to enjoy them. I find that these cigars go great with a Zinfandel. The flavors from both really play off of each other and really bring out the best in them.

The two cigars I smoked were the San Miguel and La Herencia Cubana. Both cigars are covered in an Ecuadorian Sumatra wrapper, but it is the filler in the cigars that are different. With La Hernencia Cubana AJ Fernandez had all Nicaraguan fillers from Esteli, Condega, and Jalapa. The tobacco from these regions always smoke well with one another, and because of their unique flavors they make a great smoke. The San Miguel is different in its filler tobacco. Still made under the watchful eye of AJ Fernandez, the cigars boasts fillers from the Jamastran Valley in Honduras, in addition to a mix of leaves from Esteli and Ometepe in Nicaragua. When making the cigar, they decided to have it be box-pressed since the filler tobaccos burn quite slow. The box-press allows for a consistent burn throughout.

The cigars are very similar in the since that they have a peppery, spicy, oaky, and cedar characteristic, but the difference comes from the fillers within. San Miguel offers a more earthy characteristic, which comes from the filler from Ometepe and Jamastran, and La Herencia Cubana offers a more creamy and nutty taste from the tobacco from Jalapa and Condega. Both of these cigars are treats and made incredibly well, but as to score wise, I would give San Miguel a 92 and La Herencia Cubana a 90. I believe that there is bias in my ratings, and that comes from the fact that San Miguel's flavor profile was more to my liking than La Hernencia's. These two sticks are both great and great representations of the Ecuadorian Sumatra wrapper. Definitely try these two out, and try out others with the wrapper. The 5 Vegas Classic is exactly what the name says, classic. The Cigar.com Cuban Label is a great everyday smoke and imparts old traditional flavors, reminiscent of Cubans. The Ashton VSG is a treat of a cigar. Pricier then the rest, it is a well made flavor bomb. The VSG is a special occasion cigar to say the least.