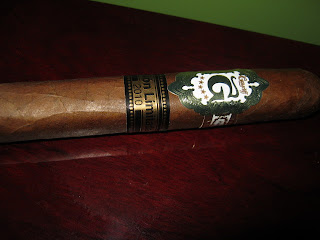 I got this stick with a sampler of other Graycliff's from Cigar.com and what a deal it was and still is if you like Graycliff cigars. I don't smoke Graycliff cigars often, in fact I am not a huge fan of the brand. Graycliff cigars to me just don't have the profile in a cigar I am looking for but there are a few exceptions, Graycliff Double Espresso being one of them, but I will talk about that sometime later on. Most Graycliff cigars are made in the Bahamas at their resort and until recently were under the guidance and supervision of Avelino Lara, who was responsible for introducing the Cohiba brand for Castro in 1968. This stick along with its brother, Graycliff Platinum Edicion Limitada, were outsourced to the Oliva family in Nicaragua and what a treat they have been.

The Oliva family started by using extremely rare and aged Nicaraguan fillers enclosed in an authentic Cameroon binder and then topped it off with a Connecticut maduro wrapper. The line comes boxed pressed which to me is great. I am fan of box pressed cigars, I think the process brings out more flavors from the wrapper and they smoke better as well. The line is very limited in production with only 50,000 cigars ever being made and the line varies from a 5 to 7.2" but keeps the same 50 ring gauge which tells me that the cigar in each line won't vary dramatically in flavor but in smoking time.

The cigar is complex from foot to head but brings out noticeable and wonderful flavors. I found that with each puff there is nice spicy sweet characteristic that lingers in your nose for some time after but about a third of the way in mellows out some and you begin to pick up more coffee, nutty, and chocolaty notes. The cigar itself was medium in body and still held on to great rich flavors right to the nub. If I were to pick out certain flavors I would say anise, cinnamon, dark baking chocolate, and a cafe mocha flavor.

I wanted to add some random flavors in there like the professional cigar critics do and have something along the lines of tar or graphite but I just can't go that far. I feel that when you begin to add notes like that you are just throwing them out there. :-)

The price on this cigar and it's limited availability are its downfalls, and for that reason alone I would save it for a special occasion or weekend cigar. Overall I thought highly of this cigar though and if I were to rate it I would probably give it between an 89 and 91, but I am not one for rating cigars often. I will talk about that in a later blog. If you are a fan of anything Graycliff however I would definitely pick some of these up but given the pricing and limited production it won't be a common purchase. I will say though however that if you are a Graycliff fan and smoke them often then disregard the pricing because you are buying them anyways and price is not an issue for you. All others pick up the Graycliff Limited Edition Case Sampler, you get 3 of these, 3 of the Platinum and 2 Double Espresso plus a leather travel case for a great price.
Graycliff Limited Edition Case Sampler 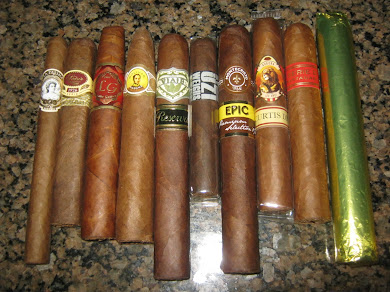 What shape do you prefer?