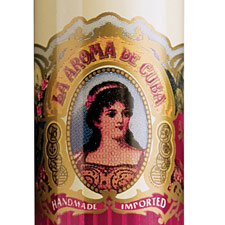 Ashton has just announced the release of a new size in their popular line La Aroma de Cuba, the size will be called Marquis. La Aroma de Cuba Marquis measures 5 3/4 inches long by 48 ring, and comes in a tube.

I am looking forward to this cigar and eager to try it. I have found that this size, a true corona gorda, really brings out the great flavors of the filler and wrapper in a cigar. I believe with a corona gorda you get the perfect wrapper to filler ratio. One of my favorites in this size is the Cuban H. Upmann Magnum 46.

One great thing about the release of this cigar is that they are putting it in a tube, I love tubes. Tubes are great because they provide protection for the cigar, and if you take it out for an evening with friends you don't have to worry about damaging your smoke. Tubes can also maintain the humidity within if sealed properly.

Ashton recently relaunched the La Aroma de Cuba brand last year under the supervision of Don Pepin at his factory in Nicaragua, My Father Cigars. The blend has changed since originally being made in Honduras and is now covered in a Connecticut Broadleaf wrapper with Cuban-seed Nicaraguan fillers.

Cigar History: La Aroma de Cuba was originally a turn of the century Cuban brand and was supposedly admired by Winston Churchill but the line died out Pre-Castro Cuba.

Cigar Tip: If you have a cigar that is tubed, put it in your humidor with the cap or top off for about a week or so. Once that time is up put the cap back on, if your humidor is working properly the tube should have the same humidity in there as the humidor once sealed.

Try this smoke out at Cigars International or Cigar.com
Posted by S. Geise