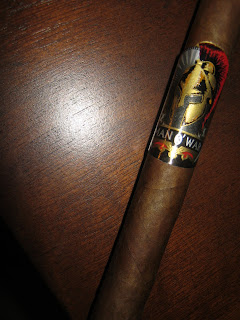 If you haven't guessed it yet, I am in love with any cigar AJ Fernandez makes. He is at the head of boutique cigar manufacturers. The original Man O' War Line was released in the spring of 2008, and it has been a great cigar ever since. The line comes in a series of sizes, and all are unique in their own way. It is hard for me to choose a vitola in the Man O' War line, but I am partial to the corona/corona gorda size, so I picked the corona. The wrapper on the cigar is an expensive Ecuadorian Habano. He picked out the richest and oiliest part of the plant, which was the viso. That leaf then went under the fermentation process for three years. Underneath the wrapper he spared no expense, and blended a chock full amount of aged Nicaraguan tobacco. One of the great things about the cigar is that after being rolled he sets the cigars down for 6 months, allowing the tobaccos in the cigar to marry with one another completely. Some manufacturers rush to get them out, and that does not allow enough time for the marriage process to really happen.

The wrapper is very oily and toothy to touch and incredibly dark. The truth is that I don't have the camera capable enough of taking really close up pictures so that you can see the texture of these wrappers, because some are incredibly gorgeous. The cigar is very round and heavy throughout, and at no point is the smoke lacking. If you want to blow smoke rings, this cigar has the smoke for it. The cigar is very complex throughout, and at no point is one flavor lacking. There is a nice amount of spice with this cigar and it plays off of the wood very well. Each draw ends with this almond vanilla flavor that is very pleasant as well. Truth be told, you will pick up lots of flavors in this cigar, almond, hazelnut, walnut, vanilla, spice, cocoa, and some espresso, but they are all so intermingled it is hard to discern them completely. I have smoked this cigar with many other serious cigar smokers, and we will each pick out different flavors.

Overall, this was my favorite smoke of 2008 and early 2009, and is probably still in my Top 25, but AJ Fernandez has made so many great cigars since the original Man O' War it is easy to forget. The second line in the brand was the Ruination, and as much as I love it, I think it steals some of the Man O' War's attention, and unfairly. I give this cigar a 91, partially because towards the end of the smoke it became a little hot and harsh, and that is partially due to the size. I have smoked other Man O' War vitola's and have not had that problem. If you are looking to have a wonderful boutique smoke that matches up with any high quality well known cigars, this is it. This is a medium-full body, full flavor smoke, that can be enjoyed over and over again. If you look for rare boutique smokes, check out the Man O' War Special Edition Figurado. It is a Salomon vitola, using an even darker and oilier habano leaf, and because of the leaf, gives off a much different flavor profile. A great thing is that right now, if you buy a box of any Man O' War or Ruination vitola's on Cigars International, you get a 5 pack of the Armada free. The 5 pack of the Armada's is worth a box basically too. Deal of the month!