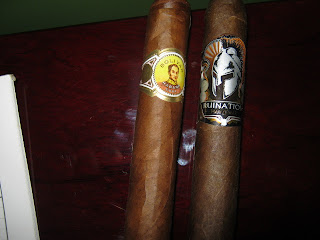 I don't often compare cigars side by side, but I figured, why not. Both of these cigars are full body/flavor smokes, and when in doubt they never disappoint. I love both of these brands, the Man O' War is more of a routine smoke for me however, just because of it's availability and price range, but that isn't to say it is better. I did this rating as I usually do, and used a method that a lot of cigar raters, including Cigar Aficionado use.

(I should note that when smoking these I was drinking some wine and watching Charlie Wilson's War, great film, but that should not affect the smokes.)

The Bolivar Royal Corona (BRC) measures 4 7/8" and has a ring gauge of 50. The BRC is probably one of the top 3 robusto's coming out of Cuba with the Cohiba Robusto, and Partagas Serie D No. 4. It is typically a very rich and powerful cigar.

The Man O' War Ruination was the follow up to the popular Man O' War line released by AJ Fernandez. The Ruination is filled with all ligero tobaccos from Nicaragua and is covered in an Ecuadorian Habano wrapper. Very full body and rich, this has become a popular smoke among cigar connoisseurs. 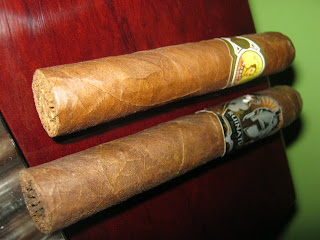 Appearance:
The Ruination was very toothy and has some medium size veins in it. The wrapper is predominantly an earthy brown color hat has been marbleized in spots. The cap was a little rough, but overall I gave it a 13 out of 15.

The BRC wrapper looked like it has been stretched when rolling and the triple-cap looked like it was mde with scrap tobacco from different leaves but was very silky to touch and had a nice reddish-hue to the light brown wrapper. I gave it a 12 out of 15.

Smoking Characteristics:
The Ruination has a looser draw then I prefer with cigars, but burned evenly throughout, never having to relight it. The aroma prelight was of wood, leather, spice, and hay. I gave it a 22 out of 25.

When starting, the BRC had an uneven burn but it corrected itself a third of the way in and had a wonderful draw throughout, not too tight or loose. Before smoking, it smelled of spices and leather. I gave it a 20 out of 25.

Flavor:
The Ruination was a full body cigar from foot to head. It never let up and along with that, had a dry finish. With each puff, I got lots of pepper, wood, spice, and leather, but always finished with a nice sweetness. The cigar changed in flavor every step of the way, and always kept me guessing. I gave it a 23 out of 25.

This BRC was not as powerful as others I have had, it just lacked the umpf, but what it lacked in power it made up in flavor. You could say the flavors in this smoke challenged me, I picked up lots of leather, hay, Chinese spices, cloves, cinnamon, and more. I gave it a 24 out of 25.

Overall I was very pleased with the Ruination. It showed great flavor and power, but remained very balanced throughout. This cigar never disappoints, and I think it has been one of the best made cigars in the past years. I gave it a 33 out of 35.

This BRC really lacked in power and had some construction issues, but it made up for it with the flavor it gave off. With flavors like I got, it is no surprise that the BRC is one of my favorite cigars. I gave it 32 out of 35.

With the Ruination getting a score of 91 and the BRC an 88, these cigars are very close in equality, but yet still very different. I think the Ruination is a better cigar when you look at the big picture and not just the flavor. Though I loved the flavors of the Bolivar, it lacked in some of the more important aspects of having a great cigar. I am sure if the BRC had better construction, and a little more body from cigar to cigar, it could be just as good or better than Ruination.

p.s. - with a purchase of a box of Ruination's you get 5 free Man O' War Armada cigars!! Heck of a deal, another reason why it should win, haha.