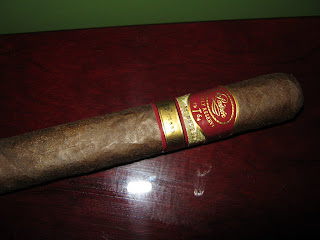 When you finish this review some of you might think it idiotic and some of you ballsie. I think it is the latter of the two...and the former. The Padrón’s are known for their high quality cigars. Their Anniversary Series 1964 and Serie 1926 are all made with a minimum of 5 years aged tobacco and have been a huge hit among cigar smokers for some years now. It was in 2008 however that they began releasing these limited edition smokes, the Family Reserve line.

Unlike most manufacturers, they do not release a new cigar every year, in fact they have only 3 lines in constant production and I don’t see that changing anytime soon. They strive on selling and making a high quality product and do not worry about quantity. I find this quite amazing in the cigar world since everyone else is doing somewhat of the opposite. I often compare Padrón cigars with pinot noirs from the Romanée-Conti region of France.

For the record I have never had a pinot noir from Romanée-Conti, but why spend so much money on a wine from that region when Washington State and Oregon are producing some of the best pinot noirs out there. Go to your wine store and compare a pinot from Oregon or Washington with one from France, you will see what I mean.

When the Padrón family released the Padrón Family Reserve No. 44 in 2008 it was not a very public release. The cigar was so limited that it was almost impossible to get a single cigar let alone a box. I have owned two in my life, one I smoked on my wedding night and one that I dare not touch, let alone write a review of.

There are some things in life where I find that they are worthy of a quote from one of my top 10 films Almost Famous, and the 44 is one of them. “Russell, the guitar sound... is incendiary. Incendiary.” I know it is odd comparing a cigar with that word but you have to see the move to get it.

“You’ll meet them all again on their long journey to the middle.” Another great quote from the film.

Following the huge success of the 44 they decided that they would release a limited cigar every year till their 50th anniversary. When they released the 45 in September of 2009 every customer was in a waiting line to get a box, including myself. The cigar itself consists of tobacco which was 10 years old! That's correct, a cigar made with tobacco grown in 1999. As to no surprise the cigar was a hit and won cigar of the year in 2009 by Cigar Aficionado, and deservedly so.

Fast forward a year and we are now at the release of the 46 and everyone is excitedly awaiting the release. Will it be as good as the 44 and 45??

The Padrón Family Reserve No. 46 is a well-made dark corona gorda, or so they call it. The cigar itself measure five ½” by a 56 ring gauge, but I would not consider that a corona gorda, to me the cigar is almost a robusto extra or double robusto. As all Padrón cigars, it is a Nicaraguan puro. Puro in Spanish means pure. So a Nicaraguan puro is a cigar that it is made will all Nicaraguan tobacco. The 46 is also similar to the 44 and 45 in that the tobacco in the cigar is over 10 years old. The only difference with these limited editions is the shape of the cigar. The 44 was a torpedo, 45 a toro, and the 46 a corona gorda.
Upon lighting I knew that this was going to be a full body cigar. Most Padrón’s are medium to full in body, but they kicked it up a notch with the Family Reserve line.  Through the first half of the cigar I picked up the signature flavors of a Padrón, coffee, cocoa, nuts, leather, toast, and spice; but I wasn’t able to find any other unique flavors that past Padrón cigars have had. When I almost reached the two-thirds point the flavors began to dissipate and it became a little harsh. Most times if a cigar becomes harsh it is because you are smoking too fast, a puff a minute they say. I soon realized that it was not my fault but it was the cigars.

I will be honest with you and tell you I was disappointed with this cigar before I even reviewed it, I have had others in the past but they just never exceeded my expectations. I think the Padrón family makes wonderful cigars, but I don’t think the 46 is one of them. If you are a fan of Padrón cigars you are probably thinking I am an idiot and that this review is awful, but ask yourself this. Does this cigar compare with the No. 44, No. 45, or even the Padrón Serie 1926 80thAnniversary?

I wouldn’t go as far as to say this is a bad cigar because it isn’t, it is much better than a lot of cigars out there; it is just a disappointment for being a Padrón. I would give this cigar a 90 partially because it lacked depth and complexity that the Padrón’s are so capable of having, and great cigars should have. Looking into the future I ask myself though, will  this year’s Family Reserve stop me from getting the 47 and beyond? The answer is simply no, I don’t care fore the 46 and I don't believe it will be as well regarded as others they have made, but I foresee great cigars still to come in their future.

If interested in trying the Padrón Family Reserve No. 44 try calling Milan Tobacco in Roanoke, VA. The owner David is a great guy. Otherwise check out Padrón cigars at W. Curtis Draper or Milan Tobacco, both great stores! If you are ever in DC or Roanoke you should check them out, beautiful and relaxing shops.
W. Curtis Draper Tobacconist
Milan Tobacco
Posted by S. Geise