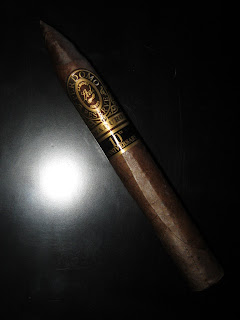 When I think of maduro cigars, there is one name that comes to mind. Perdomo. Nick Perdomo probably makes the best maduro cigars out there. Everyone of them is consistent, rich, flavorful, and has a great power to them. When smoking a cigar by Perdomo, I am always going to levitate towards the maduro version of the line. The Reserve 10th Anniversary Maduro is probably the best of his maduro's. Packed with fillers from the three major growing regions of Nicaragua, it is covered with a triple-fermented sun-grown broadleaf maduro wrapper, which is also from Nicaragua. The wrapper is just beautiful and dark. I had to take lots of pics for people to see what I mean. 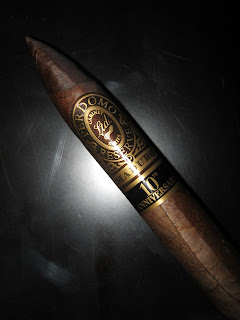 This cigar is very medium-full in body and has wonderful flavors of earth, spice, coffee, and tons of dark chocolate. This cigar remains rich from the foot to head and the flavors remain constant and complex. I strongly recommend this cigar for any cigar enthusiastic out there, I think everyone will love it. If you don't, sorry to say this, just quit. With maduros, there is a lot of flavor and strength differences from smoke to smoke. Sometimes manufacturers make maduros too powerful and have no flavor and sometimes they are just made poorly, they don't blend successfully with the maduro wrapper. Not the 10th, I think of the 10th as a very traditional maduro, balanced, flavorful, rich, and powerful. Perdomo has great maduros, I can maybe think of only two manufacturers who can compete with his maduros. If you smoke a lot of Perdomo maduros you will know what I am talking about. I don't know how he does it, he must be a godsend with maduros. I would give this cigar a 93, probably one of the best maduros on the market. This is a must try!
Cigars International - Perdomo Reserve 10th Anniversary Maduro
Cigar.com - Perdomo Reserve 10th Anniversary Maduro
Posted by S. Geise