I recently received an email from someone I did not know about how it is wrong and unfair for me to rate cigars that are provided exclusively by Cigar.com or Cigars International. The argument was that these cigars are not made for the nation and are often made because of the power these two companies have in the industry. I responded by saying that these cigars are available nationwide as long as you are willing to sacrifice going to your local cigar shop and so on. I found the argument to be fairly idiotic and even went on to ask the person how they felt about me rating Cuban cigars? I find that rating Cuban cigars which are not allowed in the United States to be far worse, but overall I don't care. The Padilla Black Bear is the wonderful counterpart to the Padilla Golden Bear and just like the counterpart it is an equally large parejo. The cigar is a 6" by 60 ring gauge gordo and is just massive in hand. The cigar comes covered in a beautiful Pennsylvania Broadleaf maduro wrapper, which I love, and has a wonderful aroma. Back to the wrapper, the Pennsylvania Broadleaf has wonderful flavors and aromas to it and is just amazing on any cigar. The aroma of the cigar has that distinct earthy rich sweetness that you get with Pennsylvania Broadleaf maduros and is just incredible. I pick up lots of cocoa, coffee, leather, wood and spice in the nose and it is one of the finest aromas I have had in a cigar in some time. Besides the Pennsylvania Broadleaf wrapper the cigar is comprised of Nicaraguan and Honduran fillers with a Nicaraguan binder.

The Black Bear begins beautifully with wonderful dark chocolate notes that are accompanied by sweet spices and leather. I picked up a small hint of mint with the opening draws and it went wonderfully with the dark chocolate notes. The first third remained very cool and creamy and was a soft medium in body. As I enter the second third of the cigar the flavors are still similar but I also begin to pick up some nutty characteristics of almonds and walnuts. The cigar still remains very creamy throughout the smoke and still has that wonderful chocolate flavor to it. I am not picking up as much of a mint flavor in this part of the cigar but it was still very pleasant and sweet. Entering the final third of the cigar there is a big change in the smoke with the flavors. The cigar to this point is still burning very cool and evenly and there is a ton of smoke. I wasn't surprised that the cigar was burning smooth because often with large ring gauges the smoke is cooler. The final third has much fuller flavors to it showing lots of oak and toast, and has a strong finish of spices and leather. I found it very interesting to have the flavors change so dramatically but it was a nice little twist or wake up could say.

This cigar would be perfect for a pre-dinner smoke. The cigar showcases wonderful smooth rich flavors for the first two thirds and then BAM! I would give this cigar an 89 and believe it to be a great weekly cigar. The cigar shows wonderful flavors and has an easy body for the most part. I think a lot of people would really enjoy the great flavors this cigar has to offer but some would not care for the large size. This is about the only large ring gauge cigar that I have ever truly enjoyed so that means something to me. If you are a big fan of big cigars then this is a cigar for you. 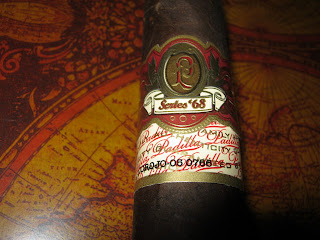 Available at Cigar.com and Cigars International
Posted by S. Geise