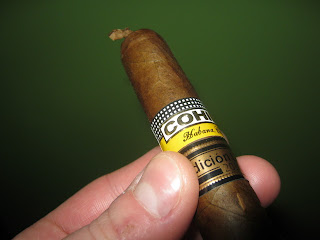 Before I even begin I need to apologize because I forgot to take a photo of the whole cigar before I smoked it. I know, I fucked up, but I did take some other crappy photos of the cigar, and I did spend a lot of time trying to find a picture of the cigar that looked like what I smoked. I did attach it halfway through the blog though. Mine had a slight ding in the wrapper, and I messed up the pigtail when I played with it, but the cigar smoked great.

Released during the 2011 Habanos Festival, the Cohiba 1966 Edición Limitada 2011 was probably the most popular cigar to come out of the festival after the Montecristo Gran Reserva. The cigar was one of the three Limited Edition releases for the 2011 year, and like most Limited Editions the cigar was finished with a darker wrapper than one usually sees on Cuban cigars. The cigar is massive for a Cohiba, more importantly a Cuban, and it fits perfectly into the cigars being made for the United States market. So far the cigars have received much praise, and have been noted for wonderful flavors and being very strong. If you were not aware of when the Cohiba brand was first produced, it was in 1966, and that is why the number made it into the name. Well, it has been a year since its initial release, and I am here today to smoke it.

The cigar is massive in hand, measuring 6 ½” with a 52 ring gauge. I would say it falls into the category of being a Sublime and also the Cañonazo vitola. I hate to say it, but I must, and the cigar is a Cuban puro. (I know, it is shocking.) The tobacco in the cigar is composed of tobacco that has been aged for two years, and the dark wrapper dressing these cigars have comes from the top leaves of the Tapado, which is shade grown black Cuban tobacco plant. The tobacco comes from the finest region of Pinar del Rio, Vuelta Abajo, and is from only two plantations. One of the plantations is in San Juan y Martinez, and the other San Luis. The cigar comes in boxes of ten, which I have attached a picture of since I did not buy a box of ten of these pricy cigars. Finished with a great pigtail triple cap the cigar is definitely maduro in coloring, showing colors of a dark chocolate bar. It is rolled impeccably, very firm, and has a wonderful aroma of toast, nuts, cocoa, coffee and spices.

The cigar begins wonderfully, and I am immediately greeted with some pleasant flavors. There is a nice bit of espresso and toast on the forefront, and the cigar is fairly dark in flavors. When I get further into the first third I begin to pick up some more nutty notes, along with some cocoa notes, and there is a nice strong tobacco flavor with a spicy and peppery finish. The cigar is burning fairly well, not razor sharp, but still fairly even, and it is producing a great strong ash that has a solid gray color to it. The cigar is not as powerful as I expected it to be, definitely not full to me, but there is a solid strength present, and I would say it is over medium in body, a solid medium full. It is like no other Cohiba I have had in terms of the flavor profile, and I would say it falls more into the categories of a Partagas or a Ramon Allones, possibly a Maduro 5. Either way, I am really digging this cigar, and loving the flavors.

I am in the second third of the cigar now, and it is still performing very well. The burn line is still fairly even, and it has been producing some solid ashes that have that same solid gray coloring to it. The strength increased some in this third, and I would say it is over medium-full now, but nothing too full and strong. It is definitely producing a strength that I prefer. I do know that sometimes when Habanos S.A. releases a cigar it is too strong, and they tone it down some later on with the blend, but mostly you just want to let the cigars age some. The original Edmundo vitola was very strong, but it became lighter over the years. In terms of flavors though, this cigar is amazing. I am getting solid tobacco notes, and I am also getting some espresso, spice/pepper, cocoa and toast notes. There is a nice finish of oak to the cigar, and also a little earthy flavors. If I had to compare this cigar in terms of Limited Edition cigars to others I have had, I would say it is better than the Montecristo2010 Grand Edmundo, but not as good as the Montecristo 2008 Sublime. So far it is the second best Limited Edition cigar I have ever had.

Finishing this cigar up right now, and it has a very lovely finish. The flavors have remained pretty strong, but the strength has gone back to being a little over medium full in body. Maybe this cigar was not as strong as others, I don’t know, but it is definitely not as full bodied as I would expect. The flavors of espresso beans, cocoa, rich earth, toast and nuts provide a great finish, and there is also a solid bit of pepper and tobacco notes present as well. It really burned well in the final third, practically perfect, and it still left that solid gray ash that I was getting throughout. As I said in the first third, I would say this is not your everyday Cohiba, but more of a Cohiba Maduro 5 in the flavor department, but still great. I smoke the cigar down to the nub where it is still cool and flavorful, and I let it rest in the ashtray.

Looking back on this cigar I was  impressed with it, but not overly impressed. I found that the cigar did very well in terms of construction and smoking, and it also produced a lot of really great flavors. I think it is a great Limited Edition, and a great cigar, but it wasn’t as amazing as I hope it would be. Overall, I find that this usually happens with Limited Editions by Habanos S., but it is unfair to judge the cigar because of that lack of hype. I should say that occasionally there is a cigar that is really fabulous in the Limited Edition line, but I tend to find myself enjoying the regular released cigars more often. Don’t get me wrong, this is a great cigar, but it wasn’t as great as I hoped it would be. I think that aging always does great things for Cuban cigars, and this cigar is no exception. With that being said, this cigar is a cigar you can enjoy now, but I think will be better in a couple years to come. I give this smoke 92 points. I think it has some really great flavors that are somewhat complex, but it provides a great smoking experience in terms of how the cigar smoked all the way through. If you have the chance I would pick up a couple of these, but if you feel like going crazy, pick up a box and age a majority of them. Really nice to have the experience in smoking this cigar.
Email ThisBlogThis!Share to TwitterShare to FacebookShare to Pinterest
Labels: Cohiba, Habanos
Newer Post Older Post Home
Subscribe to: Post Comments (Atom)