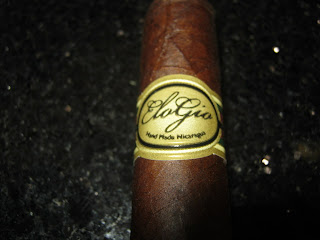 When you hear the name Robaina, most people automatically think of the late Alejandro Robaina. One of Cuba's most famous tobacco growers, actually he was probably the most famous, Alejandro grew some of the best tobacco for Habanos S.A., and his farm was one of the few that was privately run, and not run by the government. His name became so popular that eventually they names a cigar line after him, Vegas Robaina. Since his passing, his grandson Hiroshi has taken over the farm, while his son runs one of the more famous La Casa del Habano shops in Havana, Cuba. Well, with the Robaina  name remaining popular in Cuba, it was two years ago that the name began to gain popularity in the United States.

Located in Esteli, Nicaragua and under the direction of master blender, Carlos Pereda Robaina is EloGio Cigars. The company produces less then 50,000 cigars a year, and is truly a boutique company. Carlos is also a grandson of Alejandro, and what his relation to Hiroshi is exactly I do not know, but I imagine that he spent many a years working with Hiroshi, and even A.J. Fernandez of A.J. Fernandez Cigars. Currently they have two main lines, along with a limited edition line, and use Nicaraguan tobacco predominantly. I saw predominantly because just recently they began using Ecuadorian Habano tobacco for the wrapper on the Serie LSV line, because of the difficulty in growing tobacco in one of their regions. So far I have only smoked the Serie LSV line, but I can tell you that it is truly magnificent.

The Serie LSV  for this review consists of tobacco from the original blend, and it is a Nicaraguan puro. The wrapper on this cigar is a Habano seed, and it comes from a small farm outside of Somoto, Nicaragua. Somoto is located in western Nicaragua, north of Esteli, Nicaragua and south of Danli, Honduras on the Pan-American Highway. The wrapper received exceptional observation and quality control during the growing and fermenting period, and it shows in the finished product. The binder is Nicaraguan, from what region I do not know, and the filler consists of tobacco from the Condega and Jalapa regions of Nicaragua as well. For this review I smoked the robusto vitola, and it measures 5" with a 50 ring gauge. The cigar is beautiful in hand, and is rolled in the Cuban fashion. With a great triple cap, the wrapper has a beautiful dark red brown color to it, obviously a dark Colorado wrapper. There are few veins present on the oily wrapper and it is very toothy. I hold the end of the cigar, and the wrapper to my nose to be greeted with great aromas of spice, natural sweetness, stone fruit, wood and leather.
When you first light this cigar for the first half inch there are some pleasant flavors that are very light. I get a little leather and wood, but as soon as it passes that point there is a sudden explosion of flavors. I begin to notice some caramel notes, some stone fruit, Asian spices, white pepper, and the leather and wood notes from before. It is very flavorful, and the stone fruit notes I would say are more along the peach and apricot notes. The cigar is very balanced, and I would say the strength of the cigar is slightly above medium in body. The burn line is slightly wavy, not too much, and leaving a great white and gray ash.

I am in the second third of the cigar now, and it is not letting up one bit. I am still picking up tons of exotic flavors, in particular the spices, stone fruit and caramel, but I also begin to notice some vanilla notes. It is not a strong presence, but a natural vanilla flavor profile, vanilla bean. There are still some nice wood notes present with the cigar, and a hint of leather as well. The spices in this cigar are really incredible, and it takes you all over the place. There are bits of white pepper, cinnamon, cloves, nutmeg and anise. The cigar is still smoking wonderfully in this third, and producing tons of thick smoke. The ash is still that whitish gray color, and the cigar is still medium in body.

In the final third of the cigar, and it is not letting up one bit. The flavors are still very present and the strength is still a solid medium. I have a fabulous burn line still with this cigar, and the ash really holds on well through the whole smoke. The smoke is very thick, and I am getting some great rings as well. In terms of flavors, I am getting a ton of spices on the finish. All of a sudden the spices just got heavy, but it is very pleasant. I am not getting much of a vanilla note, but it is still slightly present, and the stone fruit flavors have vanished. There is still a nice bit of wood and leather present with the cigar, and it is a nice finish to the cigar. This is almost like the opposite of a Pepin. Either way, I smoke the cigar down to the nub where it is still cool, and very flavorful.

I really loved this robusto, and the flavor profile was right up my alley. The cigar provided tons of rich flavors that were sweet, spicy, and so much more. A great Nicaraguan puro that shows that just because it is Nicaraguan it doesn't have to be incredibly strong. A solid medium bodied cigar with great stone fruit notes. The blending on this cigar was top notch, and I know that the tobacco being used was of the highest quality. It possessed some Cubanesque qualities to it, but at the same time was much more complex and rich than any Cuban. This is a cigar that shows what Cubans could be like with the proper settings. A fabulous boutique that was a treat to try. I should give my shout out to Coop, Stace, and the crew down at Outland Cigars for having these smokes available, and I will definitely be remembering these in times to come. Nothing else to say about this cigar except that it blew me away. This is the second cigar this year that totally shocked and awed me, and I give this cigar a 95. Fabulous job EloGio Cigars! 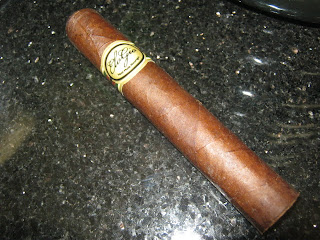 Find a Cigar in Seth's Humidor