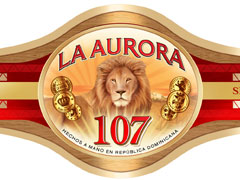 I was recently informed by Barry of Miami Cigars that the La Aurora 107 line will be getting a line extension, and that it will also be a limited edition cigar. The 107 line was released two years ago, and was released to celebrate La Aurora's 107th Anniversary. The line extension cigar will features an Ecuadorian Sun Grown Wrapper, a Dominican binder, and consist of filler tobacco from the Dominican Republic and Nicaragua. The cigar will be released in the salomon vitola, and measures 7.25" with a 52 ring gauge.

I am a big fan of the salomon vitola, and I think releasing this line in that specific vitola will be a nice compliment.This is the same size as the La Aurora Puro Vintage 2003, and it is one of my favorites vitolas to enjoy on a weekend. The cigar is going to be limited to certain accounts nationwide, and I imagine will be distributed first to accounts that have been carrying the La Aurora 107 line since its conception. The cigar is going to be sold at an MSRP of $12.00, and will be distributed in boxes of eight. If you are a fan of the La Aurora 107 line then this will be a great chance for you to enjoy that light and flavorful smoke over an extended period of time. I am looking forward to this release, and will definitely be looking to pick up a few for review.
Email ThisBlogThis!Share to TwitterShare to FacebookShare to Pinterest
Labels: La Aurora
Newer Post Older Post Home
Subscribe to: Post Comments (Atom)