When it comes to the Lancero vitola, people are really up in the air. You either love them or hate them, and more often than not people do not care for them that much. I have heard some manufacturers that there are areas of the country that prefer cigars of that caliber, but I can tell you that in Greensboro, NC most of the people are gravitating towards the Toro vitola. I am the odd one out when it comes to that at my local shop, and a large fan of the Lancero vitola. Along with the Lancero vitola being less popular than other vitolas, I have seen more and more cigar manufacturers gravitate towards Habano and Maduro wrappers. While Connecticut use to be the popular wrapper of choice, it has decreased some during the years and has become a wrapper that is not frowned upon, but shown less respect as other wrapper choices.


Of course while I say that, there are several manufacturers who are changing the playing field with Connecticut Shade wrappers, and are doing so with unique vitolas and strengthening the blends that are used with them. We have seen this with My Father Cigars, E.P. Carrillo, Gran Habano and Rocky Patel, and I believe we will be seeing more and more as well. Those four companies have made a cigar with that wrapper that is not your everyday Connecticut, and is a Connecticut aimed for the smokers who don’t often smoke Connecticut Shade wrappers. Well, there is a new player in this field and it comes with a boutique company out of Nicaragua and a company I recently reviewed, Lou Rodriguez Cigars.
Lou Rodriguez Cigars is truly a boutique company based out of Nicaragua, and is a company that utilizes their own tobacco in Nicaragua in the filler and binder and has their own factory in Esteli. If you pay attention to their site you will see that they have their own proprietary Nicaraguan filler tobacco and utilize wrapper tobacco from some of the most well-known and demanded countries. This is a company that is using Ecuadorian, Mexican and Brazilian wrapper leafs, which I think are some of the best. Yes, the website does not say it but I just smoked a Lou Rodriguez with a Brazilian Mata Fina wrapper, and it was delightful. One great aspect to this company is that because they are so boutique they are very limited on production so they pay a lot of attention to quality. Well, out of their three lines I am going to be reviewing the lighter of the three and look at the Lou Rodriguez Connecticut.

The cigar line begins with an Ecuadorian Connecticut wrapper, and has a Nicaraguan binder with Nicaraguan proprietary filler tobacco. The line is available in five vitolas, all of which are fairly traditional in their dimensions. For this review I chose the Lancero vitola which measures 7” with a 42 ring gauge. Like all great lanceros, it features a wonderful pigtail cap and is wonderful in hand. The wrapper is like most Connecticut wrappers in the fact that it is silky to touch and there are few veins present. The wrapper is fairly light under some lights and shows some light golden hay coloring, definitely Claro. The cigar has a lovely aroma at the foot and it is showing some soft spices, hay, cedar, honey and a raisin quality. Well, let’s quit talking about it and smoke it!
As I light up the long and thin smoke it begins by showing this blast of light spices. When I say blast I don’t mean that it is overly spicy, but more that the flavors are really dominating. Eventually though the spices begin to fade some towards the back end of the flavor profile, and I begin to get more notes of cedar and cream that you get with Connecticut Shade wrappers and also hay, honey and nuts. It’s really an enjoyable cigar thus far, and for having a thin ring gauge you can really get all those great Nicaraguan filler flavors. The cigar is burning at a solid medium level in terms of strength, and really producing a razor sharp burn line and long thin ash that has colorings of light charcoal gray. So far this is a stellar Lancero, and the best Connecticut Lanceros I have had to date.

Entering the second third of the cigar I am getting a continuation of the enjoyable flavors from the first third. There is a nice nutty, toasty, hay and cedar flavor profile up front and it has a subtle hint of light spices with that. The cigar has a definite creamy finish to it, and there is this sweetness in with the cream that is very enjoyable. The cigar is still performing wonderfully; leaving that solid light gray ash with a razor sharp burn line. It is smoking very cool which is what you want in any cigar, especially a Lancero, and it is leaving my palate with tons of flavors after each draw. This would be a great cigar for those cigar enthusiasts who like something softer in the morning, or for those who prefer flavorful and lighter cigars.
I am in the final third of the cigar now, and I really want this cigar to be a couple inches longer. It has been performing wonderfully throughout the whole smoke, and giving off so many great flavors. This is the cigar that you don’t want to end, and makes you want to smoke another. It is really showing those lovely cream and cedar flavor profiles in this third, and I am also getting those lovely roasted nuts, hay and toast flavor profile as well. There isn’t really any spice flavor profile present in this third, but I picked up this soft cocoa/coffee flavor profile that was very faint but enjoyable. The cigar burned perfectly, as to be expected; in this third and right to the nub I had a razor sharp burn line with a soft gray ash. It got softer in this final third and ended a little below medium in body and was very enjoyable. The last draw showed all the great flavors from the third and had a cool finish.

I have really been digging Lanceros lately, and this is probably in the top three that I have had this year. There aren’t many Lanceros on the market with a Connecticut wrapper, and I can guess many reasons for that, but this cigar was blended so wonderfully that as a smoker you could pick up those flavor deliveries from the Ecuadorian Connecticut wrapper while also tasting the pronounced flavors from the Nicaraguan filler tobacco. In some ways you can say it is along the lines of the E.P. Carrillo Short Run New Wave Connecticut because it has that creamy and wood aspect from the wrapper, but has much more as well from the filler tobacco. It is not rich, but very complex and satisfying delivering lovely flavors and a solid medium body throughout. I will say that this is a definite cigar you should try as a smoker at least once because I believe it will really surprise you. I personally loved it, and after smoking it I did not want anything else. I give this smoke 94 points; it was an incredibly well blended Connecticut Lancero.
* Cigar for this assessment provided to me by Lou Rodriguez Cigars
Tweet 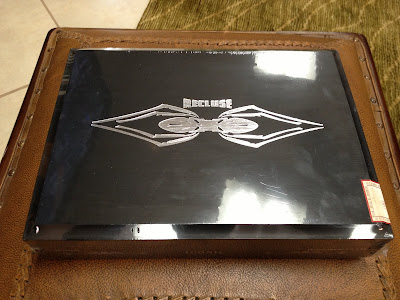