Cigar Review: My Father No. 4

This cigar line has probably the best story of them all in terms of how it came about, and is one that shows the greatness of family. The story begins with Jaime Garcia, Don Pepin's son in Central America making and blending a new cigar. No one knows what the cigar is and who it is for but there they are working on this new blend. Jaime did not want his father knowing what he was working on but as most things happen new eventually leaks from the factory in Esteli to Miami where Don Pepin is. The cigar was currently being made without the permission of el jeffe. Of course Don Pepin goes down to the factory and asks his son what is going on and there is a lot of hush hush but eventually Don Pepin asks for three sizes of the blend and goes to smoke them. The following day Don Pepin asks what he is smoking and his son tells him that this cigar is being made in honor of him.

The No. 4 is a true lancero, in the sense that it bares the same dimensions as a Cuban lancero, and measures 7.5" with a 38 ring gauge. There are some lanceros on the market that are larger in terms of ring gauge and shorter in terms of length, but I think this 7.5 by 38 is the perfect size. The cigars is composed of Nicaraguan fillers and binders, and has an Ecuadorian Habano Rosado wrapper grown by Oliva Tobacco Company. Of course this cigar is made in Esteli, Nicaragua at My Father Cigars S.A., and is finished with a great fan cap. The cigar has a lovely colored Colorado wrapper, and there are some definite veins present throughout. It is firm to touch, not oily, and very smooth. The cigar has a wonderful aroma, and I am picking up some spices, cocoa notes, leather, wood and hay.

From the get go this cigar shows tons of red pepper notes, and I remember when I first lit one up and I was pleasantly surprised. Like most Pepin smokes, the pepper blast mellows down some, and I am left picking up tons of other complex flavors. There is a nice wood presence to the cigar, and it is very cedar like with some leather there as well. I am getting some definite cocoa powder notes there too, and with that some earthy notes. There is a nice it of spice present with the cigar, some red pepper for sure, and it has a wonderful finish that is showing some dark cherry notes. The burn is great on the cigar, and it is producing a very light gray ash. It has been holding on to the cigar fairly well, but it is the cool draw and wonderful flavors I love. The cigar is showing a nice medium full strength level as well.
When I get into the second third of the cigar the flavors grow more and more, and I begin to pick up some herbal notes with the cedar and leather from before. It is still showing some great spices with that, but they are softer and in the background. There is a nice bit of cocoa powder as well in this third, and I would say it is fairly stronger and more present than it was in the first third. I am still picking up some dark cherry notes, but they are fairly soft still and on the finish. The cigar is still burning wonderfully, and it is still showing that awesome charcoal gray ash. The burn line is just razor sharp, and the draw is very cool. I would say the strength level is still smoking at that medium full body level, and it is a wonderful afternoon cigar in my opinion.

I am in the final third of the cigar now and the cigar is finishing wonderfully. The flavor profile has remained fairly similar to that of the second third, and it is showing an abundance of flavors. The cedar and leather notes are perfectly balanced with those herbal notes, and there has been a nice floral addition to that. There are still some great spices showing those red pepper notes, and it is being checked by those cocoa powder flavors. The cigar shows a great finish of dark cherries to it, and the finish is superb. I am still getting a great burn with the cigar, and it has had a near perfect burn line from beginning to end. The ash is showing that wonderful light gray color, and has throughout. I am finding the strength level to remain at that medium full level and the finish is flavorful and cool. The signs of a greatly constructed lancero.

This is truly one of the best lanceros on the market, and has been since its initial release in 2008. The cigar shows exemplary construction from beginning to end, and has a perfect balance between strength and flavors. It is a cigar that constantly shows a great strength level, but is being checked by its flavors as well. I would say that it is the second best cigar in the line after the No. 1, and one of the best releases in the My Father/Don Pepin portfolio. It is without a doubt one of my favorite lanceros to smoke, and I is a smoke that was brought back to my attention by a good friend. I know this cigar has been on the market for sometime, but if you have not yet smoked it by some chance you need to. I give this cigar a solid 93 and will smoke it for years to come. 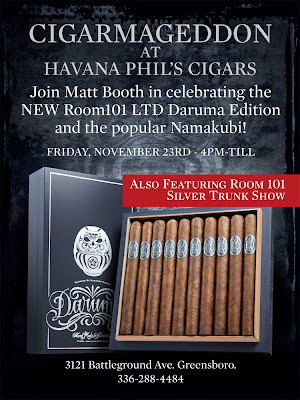