There is nothing better than seeing two men come together to create a cigar or cigar company. We have seen it multiple times in the past, and it is great to see them still in existence and producing great cigars, but unfortunately that does not always happen. The newest pairing to the industry however is composed of two men who have experience and and years in the industry, and for one of them is starting from the beginning all over again. These two men are Christian Eiroa and Robert Caldwell. Robert Caldwell is the creator of Hotel Humidor, and Christian Eiroa as most of you may know was with Camacho Cigars until recently when he left and started Asylum Cigars with Tom Lazuka and CLE Cigars on his own.

Wynwood Cigars are based out of the Wynwood area in Miami, Florida. The Wynwood area is known as the art district of Miami, and is full of colorful wall paintings from local artists. This is the area in which the team decided to build their factory, and it employs a handful of rollers that were selected to come there from Honduras. The factory in Miami is called Tabacaleras Unidas, and it is here that Asylum Cigars and Wynwood Cigars will be made. While Wynwood has two cigars, I am still waiting on confirmation for all information on them. This particular cigar is a Honduran puro, and is made up of entirely Corojo tobacco. I do know that these particular cigars come without bands, and that the boxes are painted by local artists before being shipped. All boxes are incredibly colorful, and this particular cigar came in a box that is best described from the photo of the lid below. 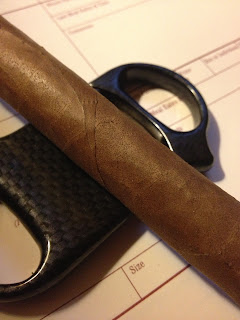 These particular cigars are fresh rolled cigars, and are sent directly from the factory after being rolled. They are kind of a special edition smoke and are intended to be smoked directly or after a certain time period of resting, roughly 90 days. I have smoked some fresh rolled cigars, and I can tell you that they are very enjoyable after rolling, but after a little bit of time you begin to notice they are not tasting as great, "sick period," and need to spend some time in the humidor before smoking again. I actually had the opportunity to roll a couple of my own one time and then age them before smoking on graduation. The particular vitola I grabbed was the 465, and is a 5.5" by 46 ring gauge corona gorda. The cigar has a very soft aroma at the foot, and it shows some lovely fruit, wood, spices and leather notes. Cigar has a light coloring, almost a light Colorado, and is very toothy in appearance. It is a firm cigar and beautifully rolled.
Lighting up the cigar there is a great beginning to it, and I immediately begin to pick up some lovely grass and hay notes. There is a bit of leather there as well, and it is showing some very nice cedar flavor profile as well. I am picking up a little bit of bitter lemon with that, and even some fruit qualities with that. The cigar is burning wonderfully as well in terms of construction, and it is producing a razor sharp burn line to that. The ash is very firm on the cigar, and it is showing a lovely light gray coloring with that. I would say the strength of the cigar is around medium in body, and it is producing a nice amount of smoke with each draw. It is definitely an enjoyable first third, and I look forward to seeing how it smokes.
When I get into the second third of the cigar I find that the flavors are becoming a little more complex, and I am really beginning to pick up a lot of coffee bean notes. There are still some leather hay and grass notes with that, and I would say that there is this lemon grass flavor profile to the cigar. I am picking up a light bit of fruit notes in this third, and this is definitely the sweet spot of the cigar. The cigar is still burning wonderfully in terms of construction as well, and I can safely say that these cigars are rolled by the best. The razor sharp burn line is producing that great light gray ash to the cigar, and it is holding on well. The strength is still at that medium body level in this third, and it is the sweet spot that you ask for when you smoke a cigar.
I am in the final third of the cigar now, and I am finding the flavor profile to return to the level that it was in the first third. There is a lot of lemon notes showing to the cigar, and while the coffee bean flavors are still present they are not as powerful as they just were. I have picked up a good amount of leather and grass notes to the cigar also, and with that some nice hay notes again. I would say the finish to the cigar is grassy with some fruit notes and very enjoyable. The strength of the cigar on the finish is at a solid medium body level still, and construction wise is top notch. From beginning to end the cigar has produced that lovely light gray ash with that razor sharp burn line, and the finish is fairly cool, slightly warm, but flavorful.
This is a very interesting project, and I look forward to seeing how these cigars are accepted by smokers now and in 90 days. Don't get me wrong, these cigars are very tasty now and they have a nice bite to them that I enjoy, but I think they are going to be great when they are rested. In terms of construction these cigars are phenomenal, and every one I have picked up has had an excellent burn line and wonderful ash. The flavors are very enjoyable as well, and I would classify the cigar as a edgy and stronger Namakubi in some ways. I enjoyed the packaging on the cigar, and it is definitely a cigar that someone should buy a box of and put aside for some time. Thinking on that statement, I would say that the intention of this cigar is to encourage a box purchase. I am interested to see how sick/young this cigar will be in 30 days, how it has improved in 60 days, and how it then smokes in 90 days. As of right now I would say this cigar is an 89, but I think with some rest we could see a 93-94.