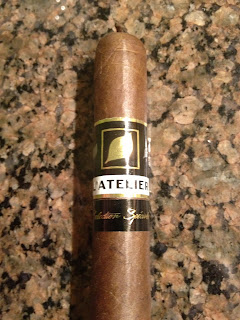 In late November and December of 2012 we began seeing a new L'Atelier smoke emerge. It was clearly not part of the original three vitola offerings but was a corona gorda in format. It was later confirmed that this smoke was going to be a line extension to the original L'Atelier LAT line and would be offered in a  true corona gorda offering. The smoke would be called LAT46 Selection Spéciale and would be available in ten count boxes. Since then they have announced there will be a L'Atelier Maduro, and that is set to be released in May. I was very eager and excited to smoke this cigar and awaited the date that it would be nationally released. I am a huge fan of smaller cigars, so when you begin to offer a line in a smaller ring gauge I am more than likely going to loose my shit. Well, that day is here and so today I begin my review of the newest smoke from L'Atelier Imports, the LAT46 Selection Spéciale.

L'Atelier is French for "the workshop," and is a line/company that has been formed as a collaboration between four individuals. Like all cigars made for Pete Johnson of Tatuaje the cigars are made by Pepin, and this line is made in the My Father Factory in Esteli. The cigar is composed of Nicaraguan tobacco in the filler and binder, but has a wrapper that is the first of its kind. It is called Sancti Spiritus, and is a hybrid of Criollo and Pelo de Oro. It is grown in Ecuador by Oliva Tobacco Co., and this is the first cigar line to feature this wrapper. I am grabbing the newly released offering for this review, the LAT46 Selection Spéciale, and the cigar measures 5 5/8" with a 46 ring gauge. This particular size utilizes a higher priming of the infamous wrapper, and because of that it is richer and darker. The cigar features a wrapper that is very dark in coloring, solid Colorado Maduro, and it has some small veins present throughout. It is not incredibly oily, but you can pick up some bits of oils here and there. The aroma of the cigar is that of leather, oak, sweet spices, rich earth and hay notes. 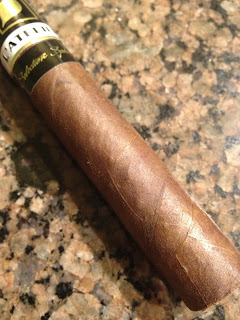 Lighting up the cigar I am getting some aroma of that Sancti Spiritus wrapper and it is showing some great wood, tea and spice notes. The first third has a flavor profile that encompasses that aroma and there is a nice balance between wood, leather and tea notes that is accompanied with some nutty and sweet spice notes. The spices are that of Asian spices, but there is some definite sugar cane notes with that. Along with some terrific flavors the cigar is showing great construction and smoking wonderfully. There is a great level of smoke being produced with each draw and the ash that is being produced has a nice charcoal coloring. The ash is holding onto the cigar firmly and the burn line with the cigar is just perfect. I am finding the strength level of the cigar to be at a medium full level and you can pick up the strength level on this particular size to be significantly stronger than the classic LAT smokes.
In the second third I begin to pick up some coffee notes with the cigar and it is richer than before. The coffee notes are pairing with the sweet spices from before and with that it is showing the leather and wood flavors. There are still those tea notes to the cigar and towards the end of the second third I begin to get some rich earthy qualities as well. The construction on the cigar is still top notch in this third and it is producing all the great characteristics from the first third. The burn line on the cigar is razor sharp with that great charcoal colored ash and it is holding on to the end firmly. The strength level is slightly stronger than medium full in this third and I would say that we are now at a solid full body level and it is feeling like a completely different cigar overall in terms of strength. The flavors are still showing some similarities to the classic LAT, but at the same time very unique.
I am in the final third of the cigar now and the flavor profile has become significantly richer than the first two thirds and I am getting some cocoa and earthy notes pairing with the coffee flavors and sweet Asian spices. There are still some of those core tea, oak and leather flavors present with the cigar but by this point it is very rich and showing a terrific finish. Like the first two thirds the cigar showed terrific characteristics in terms of construction and had a nice strength level. The strength level is finishing at a solid full body level and it has been at this level since the second third. The ash has remained that charcoal coloring from the first two thirds and it has kept that perfect burn line as well. The draw is cool and producing great smoke throughout and the cigar is cool and and flavorful to the nub. 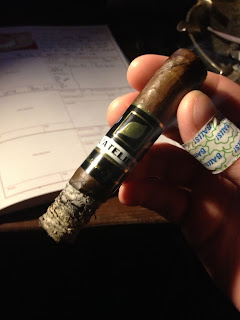 I really enjoyed this blend and found that it offered a stronger and somewhat richer blend than the original L'Atelier LAT smokes. In some ways it reminded me of the Tramp Stamp, but at the same time something completely different. You definitely picked up a lot of the wrapper in the smoking experience, and the fact that it was from a higher priming changed the flavor profile of the wrapper leaf. If you wanted the original LAT to be fuller in terms of strength, this cigar definitely delivers that. The flavors overall are that of leather, spices and wood, and it is a great evening and afternoon smoke. Overall the construction on the cigar is great, and it is produces an even burn line with a great charcoal colored ash that holds on firmly. From beginning to end it has a nice cool and flavorful draw that produces a great amount of smoke and when you reach the nub you want another one. I am giving this cigar a solid 92 and look forward to enjoying these cigars when I want a classic LAT, but want some strength with that. 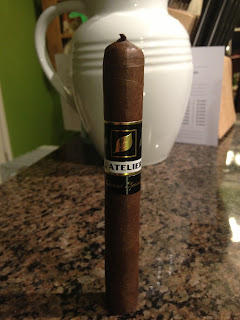