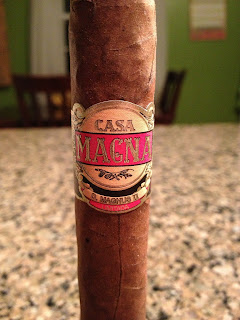 At the 2012 IPCPR word began to spread that there would be a follow up to the popular Casa Magna Domus Magnus, and the cigar would be the Domus Magnus II. The cigar was delayed in its release, as it was just released a couple weeks ago, but was still getting much discussion. The original Domus Magnus was limited to 100,000 cigars, but I have not seen anything mentioned in regards to this smoke. Quesada announced that the smoke would be slightly tweaked from the original Domus Magnus, but would share a lot of similarities. The cigar did not make it into my Top 25 of 2011 as the Oktoberfest was the cigar that knocked it out of the running, but was a smoke that I enjoyed thoroughly. I have always viewed the Domus Magnus as the cigar nerds version of the Casa Magna, while the Casa Magna reached out to the everyday smoker.

The Casa Magna Domus Magnus II follows the successful Domus Magnus, and like the Domus Magnus is a Nicaraguan puro. The smoke has been slightly tweaked for this smoke and features a new wrapper. The wrapper is still a Sun Grown wrapper from Jalapa, but is from a 2007 vintage. The line is offered in only two vitolas currently, and they are the original Optimus and Maximus. I always preferred the Optimus offering and that is why I am here today to smoke the size once more. The cigar measures 5 3/4" and has a 52 ring gauge. It is finished with a unique pigtail that is more like a stump. With a beautiful wrapper that is a gorgeous Colorado coloring and very rustic that cigar is firm in hand. There are some veins present throughout, but the wrapper is smooth and rolled wonderfully. The box pressed offering adds a lot to the smoke, and it has an aroma of leather, chocolate, citrus notes and spices. 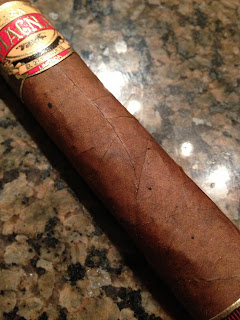 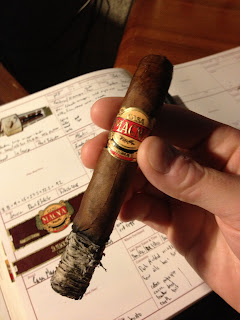 Lighting up the cigar there is a warm and comforting flavor profile to begin with and it is very enjoyable. I am picking up some great notes of cocoa, graham cracker and leather initially  and there is a nice red pepper and orange citrus on the finish. It is a nice medium to medium full body cigar, and though it is not overly complex it does provide a nice bit of flavors. I would say the strength of the cigar overall is at a medium strength level, and because of those two factors is producing a cigar that could be enjoyed at most times by many smokers. The burn is a little wavy in this third, but it is not major and presenting any problems. There is an ash to the cigar that is slightly flaky and dark gray in coloring.

When I get into the second third of the cigar I am seeing a lot of the core flavors from the first third, but there is an increase in the leather notes from before. There is a slight woody and earthy vibe happening with the cigar also, but it is keeping that core cocoa, orange peel, red pepper and graham cracker flavor profile. It has a nice balance between having a nice dry and rich finish, and is remaining at a medium full level. The strength is keeping that medium strength level as well and for a smoker like myself it is an easy cigar that you can sit back and relax with. The construction on the cigar is identical to the first third and producing a slightly wavy burn line overall with a very nice draw. It has some depth to it, but nothing over the top. 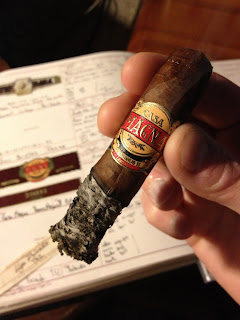 I am in the final third of the cigar now and I would say that the cigar is finishing very similar to how it has been smoking so far. There is not a dramatic change in the flavor profile or complexity, but it is showing those enjoyable flavors. Some argue that a cigar needs transitioning through each third, but I believe that if it is offering a great core flavor profile throughout it is performing wonderfully. Those cocoa, orange peel, leather, red pepper and graham crackers remain present to the end, and it is a nice medium full body cigar. The strength is finishing at a medium strength level also, but the construction has improved in this third. I am getting a nice even burn line in this third to the end, and it is producing that nice dark charcoal colored ash. The final draw is smooth and cool, and ends with a nice cocoa flavor profile. 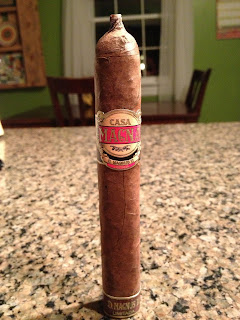