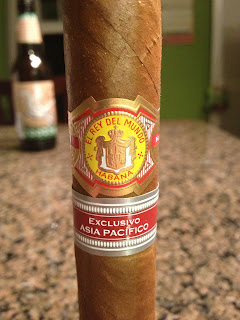 In today's cigar world the El Rey Del Mundo brand is a brand that is very low key. It manages to fly under the radar quiet well, but is a brand that Habanos S.A. continues to produce. There is also a Honduran version made in the same factory as Punch, but that doesn't event get posted on the General site. The only time I really catch a glimpse of an El Rey del Mundo is when it is a regional release, and then it is gone till its next creation. The interesting thing about the line is that for a period of time it was considered one of the most expensive and prestigious brands for Cuba. The brand was established in 1882, and was believed to be established by the same creator of Sancho Panza. The translation of El Rey del Mundo is "King of the World," and the boxes present a man on carriage being pulled horse, elephant, ram, donkey and camel. The line has always been known for being fairly mild in terms of body and strength, and is a cigar that does not speak to many modern day smokers. For 2012 though Habanos S.A. decided to release the brand as a regional release for the Asian Pacific. 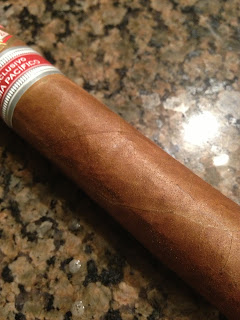 The Regional Edition Series was launched in 2005, and was launched to promote certain brands in the Habanos S.A portfolio. Habanos has four brands of cigars that they produce, and they are the Global, Niche, Multi-local and Local. The Regional Edition Series only encompasses cigars in the Local and Multi-Local brands. The run has a lifespan of 12 months and has set a minimum production of 25,000 cigars. I personally love the concept of the regional program, but believe that Habanos S.A. fails in its delivery. They can make some incredible vitola offerings in this program, but sometimes they do not work hard enough on the blending of these smokes. There are times when you can get a wonderful cigar, but there are times where you can get a dud. I won't get into naming them all, but I have coime across some gems since 2007. Today I will be talking about a release for the 2012 program, and that is the El Rey del Mundo Aniversario Edición Regional Asia Pacifico. 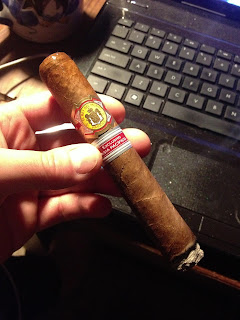 For 2012 they released a massive smoke to the El Rey del Mundo brand, and is the biggest smoke currently in the brands portfolio. The cigar is classified as a robusto extra and in the factory is called a Geniales. It measures 5.9" and has a 54 ring gauge. The construction on the cigar is solid, and it has lovely triple cap applied. There is a nice soft Colorado coloring to the cigar and it is silky to touch with some tooth present. It is a little soft to touch, but you can see that it is packed full of tobacco. Obviously the cigar is made entirely from Cuban tobacco, and like most cigars out of Cuba has tobacco from Vuelta Abajo. The aroma of the cigar is very light and summery, I am piking up some hay, cedar and grass notes predominantly, but getting a little bit of spicy tobacco with that as well. 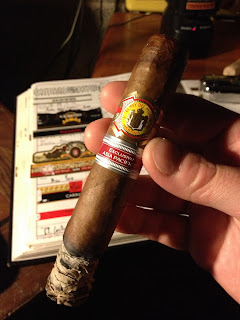 The cigar begins on a soft note, and is showing a nice Cuban flavor profile while remaining mild in terms of body. There is not a whole of depth to the cigar, and is not overly complex. I am picking up some hay, cedar, grass, nuts and tobacco notes to begin with, and as I advance further into the cigar I begin picking up some leather, toast and spice notes. The spices are very soft, not peppery, but are present and providing a little bit more to the cigar. The strength of the smoke is definitely at a mild level, and is a cigar I could smoke first thing in the day. It is a cigar that every smoker could smoke in my opinion. The construction to the cigar is very nice, and it is producing a nice even burn line with a solid charcoal ash. There is a good amount of smoke being produced with each draw and it is smoking very cool. 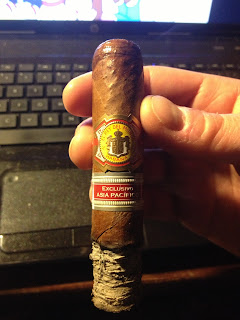 When I get into the second third of the cigar I find that the flavor profile being offered is nearly identical to the first third. There was a slight bit of coffee beans being noticed, but nothing very noticeable. For the most part it is showing those light grassy, cedar, hay, tobacco and nutty flavors, with some spices and leather notes here and there. It is not a bad cigar overall, but it is not a cigar for me. I can list a lot of smokers who would enjoy this and not enjoy this cigar. The brand itself is meant to be milder overall, and that continues with this smoke. The construction on the cigar is still very solid, and is producing that nice even burn line with charcoal ash. The ash is holding on firm and there is a nice bit of smoke being produced with each draw. I have smoked these in the morning and evening, and I can say that it is a morning cigar without a doubt. 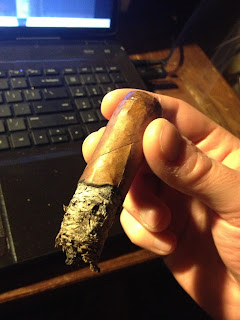 I am in the final third third of the cigar now, and it is not changing much from the first two thirds. The flavor profile is that core flavor profile, and very light. You can definitely pick up the soft tobacco notes in the cigar, and I doubt there is much ligero in this smoke if any. They don't use any ligero in the Hoyo Double Corona smokes, and those have more depth than this not so little guy. The hay, cedar, grass, nut and toast flavors are predominant, and the finish is not showing any leather, coffee or spice notes. The body and strength are still at that mild level, and on the finish it is disappointing. The burn line is still nice, with a solid charcoal ash, and it is producing a cool finish. There is still a nice bit of smoke being produced with each draw, but it is lacking all those characteristics I hoped for. I hate to say this, but for me the best thing going for this smoke is the appearance of it, it just does not have what I am looking for as a smoke. 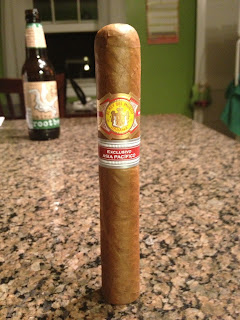 This is a very mild cigar in terms of body and strength. There is no point in this cigar that will take you on a roller coaster or throw you a curve ball. Because of that I found the cigar somewhat boring at times. Cubans from time to time can be like this, and I feel that when I have a milder smoke like this or the Quai d'Orsay it can leave me feeling disappointed. I know a lot of novice smokers who would really enjoy this cigar, but if you are smoking cigars like the Liga Privada No. 9, Fausto, illusione Original Documents, etc., you are going to be highly disappointed. The construction was fairly solid from beginning to end, and it produced a nice burn line with a solid charcoal ash. There was no problem with the draw, and the fact that it was a larger smoke made it a cool smoke. I have smoked through a bunch of these in trying to determine what it should get, and I am stuck at an 88. It did not really blow my mind, but would be a great morning smoke. I will probably finish these off at the beach this summer unless someone is dying to try one.
Email ThisBlogThis!Share to TwitterShare to FacebookShare to Pinterest
Labels: El Rey Del Mundo, Habanos
Newer Post Older Post Home
Subscribe to: Post Comments (Atom)