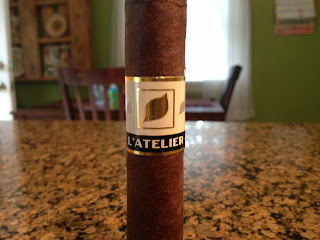 Last year we saw the creation of L'Atelier Imports. It was a company that began under four individuals, and  each of the them played and still plays an integral part in the company. Those four individuals are Pete Johnson, K.C. Johnson, Sean "Casper" Johnson and Dan Welsh. We all knew who Pete Johnson was when the company was created, but the other three were somewhat unknown figures. Dan Welsh is the owner of Columbus, Ohio bases New Havana Cigars, an online cigar company that really captures the brick and mortar vibe. Sean "Casper" Johnson worked and still works for Tatuaje in the main office. K.C. Johnson is Pete's brother, and he worked for his school district in his home state of Maine. Together these four created a company that his risen in success expeditiously, and have created brands that reach out to many of the modern day cigar smokers.


The companies flagship brand/line was L'Atelier. The cigar featured a wrapper that was never used before, and was framed out in the same way as the Cohiba Behike. The cigar has received numerous high ratings since its release, and I see the cigar as a great example of the skills Pete Johnson has. The cigar is very un-Pete like, but I do not mean that in a bad way. It is something different than most would expect from Pete, and that is a great thing to see with manufacturers. It captures a whole new flavor profile and style that we have not seen in the past. Eventually, after success was rising around L'Atelier, word got out that there would be a L'Atelier Maduro. It was not for sometime that the blend and sizes were released, but the words was out that there would be a follow up to the incredible and one of a kind L'Atelier. 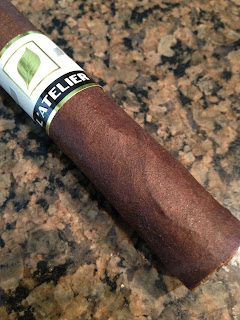 The cigar has been called L'Atelier Maduro and is a completely new project from the original L'Atelier. The cigar features a maduro wrapper that Pete is well known for, Connecticut Broadleaf, and he is The King of Connecticut Broadleaf because of skills with using the tobacco. The binders are Nicaraguan and Ecuadorian Sancti Spíritus, and the Ecuadorian Sancti Spíritus binder is the same tobacco used in the original  L'Atelier blend. The filler is all Nicaraguan, but as I said earlier is a completely different blend than the L'Atelier. For this review I chose the MAD54, and the cigar measures 4.5" with a 54 ring gauge. The cigar does not feature a fan/pigtail cap as the original LAT, and that was done with the Guapos line as well. The cigar has a nice firmness to touch, and it is featuring a toothy and bumpy wrapper. There are few veins present to the cigar, and it is dry and not oily in hand. The cigar has a clear maduro coloring, dark chocolate, and has a beautiful triple cap. The aroma at the foot is of earth, wood, tea and tobacco, and shows some spices and pepper on the end.The wrapper is showing some earthy, cocoa and barnyard notes as well. 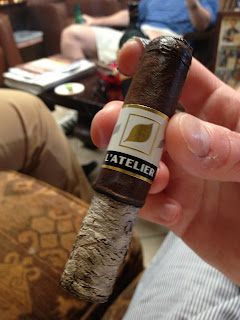 The cigar begins fairly soft and is showing some lovely chocolate and cream notes. I would say it is hot chocolate like overall and very smooth. There is some nice spices with the cigar also, and it is showing some lovely cinnamon and nutmeg notes. There are bits of cedar with the cigar also on the finish, and it is very smooth. I would say the body of the cigar is between medium and medium and full, and the strength is at a medium level. So far it is a cigar many could smoke and enjoy, and a great Connecticut Broadleaf for me. The construction on the cigar is stellar, and it is producing an even burn line with a firm ash. The ash has this nice charcoal gray color to it, and there is a nice amount of smoke being produced with each draw. It is very different than the core L'Atelier, but just as enjoyable.

I am in the second third of the cigar now and I am finding the spices and cedar notes are really popping now. There is a nice little red pepper zing with the spices in this third, and it has taken the cigar to a whole new level. I am getting that solid hot chocolate flavor profile with the cigar still, and the flavor profile is growing in intensity and complexity. It is really showing some lovely Mexican hot chocolate characteristics, and is a wonderful dessert cigar. I would say the body of the cigar is at a medium full level in this third, and it is going side by side with the strength level which is now between medium and medium full. The construction on the cigar is still top notch, and it is producing an even burn line with that lovely charcoal ash. The draw is still cool and producing tons of smoke, and it leaves your palate wanting more and more. 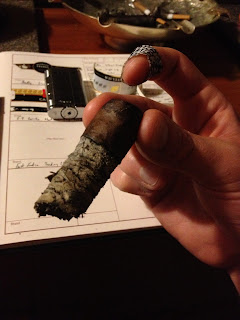 In the final third of the cigar and the flavors from the second third are still rocking. I am getting those wonderful red pepper, cinnamon and nutmeg notes along with the cream and chocolate flavor profile, and it is sweet and spicy. There are still those cedar notes to the cigar as well, and the wood flavor balances out the richness of the other flavors. The cigar is very balanced overall and the body of the cigar is definitely medium full. The strength is finishing right at that medium full level as well, and this is a great maduro. The construction has remained perfect throughout the whole smoke, and the ash has kept that solid charcoal coloring. The cigar warms up a little bit at the end, but the fact that I am nubbing the cigar plays a factor in that. After smoking my first one I grabbed another and I am on my fourth as I write my conclusion.

Pete Johnson does a great job with Connecticut Broadleaf, and this cigar is an example of that. There is a lot of balance and complexity to the cigar, and it produces a terrific flavor profile and strength level. I feel that it is a cigar many smokers could enjoy, and it is a cigar I would smoke a lot of. I have found the original L'Atelier to be an everyday cigar for me, and I can see this being a frequent maduro for me as well. I feel that this cigar shows a little bit more Pete Johnson qualities than the original, but that has to do with the wrapper being used. While I am not a fan of everything Pete Johnson makes, I do recognize you are going to get a solid cigar when your smoke one. I may not care for a flavor profile, but that does not mean it is a bad cigar. I am looking forward to smoking the MAD44 and MAD56, and I know that the ring gauge variation throughout the line will play a factor in how the blends taste. For this cigar though I am giving it a 91. The cigar had a lovely appearance, the aroma was lovely, the construction was stellar, showed nice transition in flavors from the first to second third and was a cigar I would smoke consistently when reaching for a maduro. 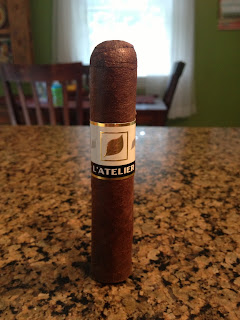 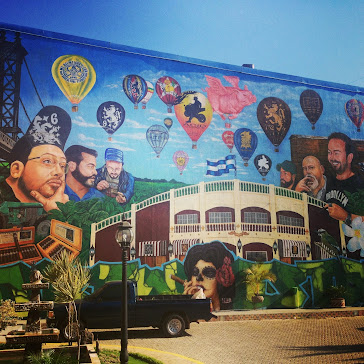