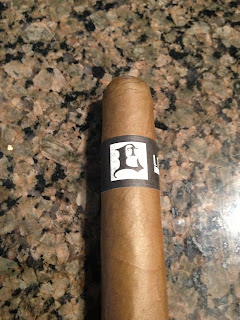 There has been a lot of attention this year with the use of fire cured tobacco in cigars. It has been used in the past, but never received the attention that it is getting now. I believe I was watching a video of Steve Saka discussing the use of fire cured tobacco on Cigar Safari, but he was referring to cigars that utilized the fire cured tobacco many years ago. This year is a big year for it however because the use of the fire curing process is being publicized heavily. There have been two releases announced this year using this fire cured tobacco, and I imagine following the IPCPR we will be seeing more. Manufacturers tend to piggy back off of others when they see the success others have had. The two blends utilizing tobacco that has undergone this process are the MUWAT KFC (Kentucky Fire Cured), currently unreleased, and the recently released Leccia Black & White Black. Both cigars use it to a different level, but it definitely does and will play a factor. 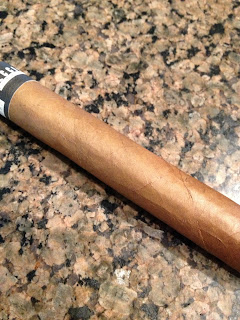 When you smoke cigars on the market today the tobacco inside has been air cured. The tobacco is hung in barns and cured naturally. Occasionally they will start small fires or throw water on the ground to keep the desired humidity, but it is a natural process. Fire Cured tobacco is tobacco that is cured by the smoking of hard wood or other types of wood directly underneath the tobacco. This process can take between half a week to several weeks and cures the tobacco so that it browns, but also adds some smoky flavors to it. It is a very potent aroma with the cigars, and I have been getting this great mesquite barbecue aroma. We are seeing a lot of Virginia and Kentucky tobacco undergo this process, and for the Leccia Black he used some tobacco from Kentucky. 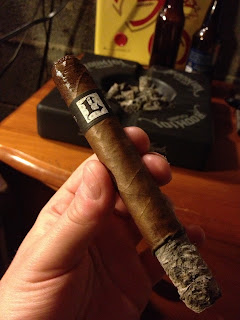 Unlike the White which is made in Nicaragua, the Black is made in the Dominican Republic. The factory is kept undisclosed, but I have my thoughts on the factory being used. The cigar itself has an Ecuadorian Habano wrapper with a Nicaraguan Rosado binder. The filler is composed of Nicaraguan and Dominican ligero, Brazilian Monte Fina Seco and some fire cured tobacco from Kentucky called Dark Fire. The cigar has a wrapper that is very silky to touch and has a coloring that is between Natural and Colorado. It has a nice firmness to squeeze, and there are some small veins throughout. There is a lovely cap in place for the cigar and it is constructed wonderfully. The aroma on the cigar is amazing, and it shows this great mesquite barbecue aroma with this smoky and pepper zing. There are some solid tobacco notes as well with the cigar and it is great. For this review I chose the Toro, and the cigar measures 6" with a 50 ring gauge.

The cigar begins showing a lot of flavors from the fire cured tobacco. It is potent tobacco, and the flavors from it engulf my palate. There is this mesquite, peaty and smoky flavor profile from the get go, and it is accompanied by some solid tobacco, pepper, spice and leather notes. There is a little sweetness and balance to the cigar as well, and that is what is checking the other flavors throughout. The body of the cigar is at a medium full level in my opinion, and is fairly on the dryer side of things. I would say the strength of the cigar is between medium and medium full, but closer to medium full. There is a tighter draw on this cigar I have found, as well as others. I personally like a tighter draw so I  did not have a problem with, but some may not care for it if they like an easy draw. Overall a solid first third that produced a lovely burn line and nice light gray ash. 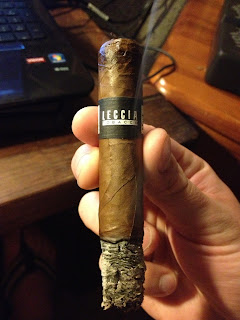 When I get into the second third of the cigar I find that the smoky flavor from the first third gets tones back a little. I am not getting as much mesquite flavors to the cigar, but I am still getting tons of leather and oaky notes. There are some spice and peppers notes with the cigar as well, and it is showing some light espresso bean notes. The body of the cigar is remaining at that medium to medium full level and the strength of the cigar is between medium and medium full as well. I would say in this third the fire cured tobacco is playing less of a factor from before, and it is showing some great balance. The draw to the cigar is still fairly tight, but as I said before I like that. Construction wise the cigar is performing wonderfully, and it is showing a lovely light gray ash. I have really been enjoying these cigars so far, and I am interested to see the transition into the final third.

I am in the final third of the cigar now and I am seeing a return of the smoky, peaty and mesquite barbecue flavors. I really dig the fire cured tobacco flavor profile, and it is a trait that some will really enjoy. There is that leather, oak and pepper flavor profile with the cigar, and it has a peaty, coffee and spicy finish. Overall the finish shows that smoky fire cured flavor, and it really holds on to your palate for a while afterwards. I would say the last third of the cigar has a medium full body experience, and the strength is at a medium full level as well. It definitely closes in a fashion that would have me smoking this as the last cigar of the day or finis the day by smoking another. The construction  has remained solid through the final third of the cigar and it has continued to produce that even burn line with a charcoal ash. The final draw is cool and still showing a tighter draw. 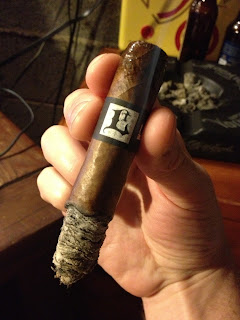 The fire cured tobacco definitely plays a part in the cigar and it possesses a flavor that you will pick up throughout. Sam may have only used one leaf in the filler, but it definitely played a factor. The leaf offered this smoky and mesquite characteristic throughout, and it added a flavor that was consistent from beginning to end and new to me. I think some smokers will care for it more than others, and maybe it is a flavor profile that will do better in the South. When I say South I mean the states that have barbecue, and the states that fought for the South in the Civil War. The cigar showed a tight draw with each smoke, but I prefer a tighter draw overall with my cigar. I would be interested to see what the cigar was like without the use of the fire cured tobacco because I wonder if that leaf played a factor in the draw. Overall the flavor profile was very enjoyable and the strength level was solid as well. It is a medium full cigar in a lot of ways and very different when compared to the White. I give the cigar a solid 91 and will definitely smoke these in the future. 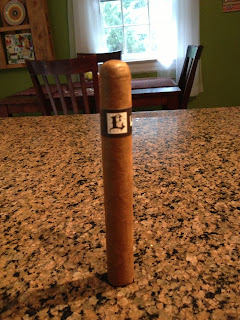