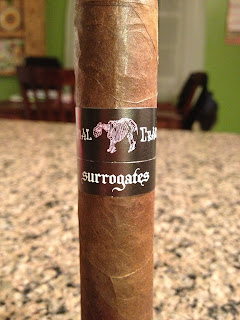 In January of 2013 L'Atelier Imports showed off a picture of one of its soon to be releases on Facebook. The photo was of Dan Welsh, one of the four involved in L'Atelier, holding a massive cigar called Animal Cracker. At the time they announced that the cigar would be a 6" by 60 ring gauge cigar, but the blend was not yet disclosed. Like the rest of the cigars in the Surrogates brand, the name is catchy and not very "traditional." Heck, even the band comes with a image of what looks like a rhinoceros skeleton. I am not part of the inner circle to understand the meanings, and believe me I have asked. Surrogates itself was a line/brand that was originally created for New Havana Cigars, owned by Dan Welsh, and was meant to be a limited cigar that you could get at an affordable price everyday. Its any oxymoron really, making a limited edition cigar available all the time at an affordable price, but L'Atelier has done it.

Animal Cracker marks the fifth cigar in the Surrogates brand, and the largest cigar in the Surrogates and L'Atelier portfolio. It is a 6" by 60 ring gauge cigar and has a fuma head. The cigar, like all Surrogates, is made at My Father Cigars in Esteli, Nicaragua, and is made under the strictest of requirements. The cigar features a dark Ecuadorian Habano wrapper, and is completed with Nicaraguan filler and binder tobacco. The coloring is a dark Colorado Maduro, and the wrapper shows some veins and lots of oils. It is a smooth wrapper throughout, and is packed full of tobacco. Firm and heavy in hand, the cigar has an aroma of pepper, spices, tobacco, leather and wood. I will say that the aroma at the foot of the cigar has some power to it and caught me by surprise. You can read that a cigar is going to be full body and strength, but until you have the cigar in hand you can't fully make the assessment. 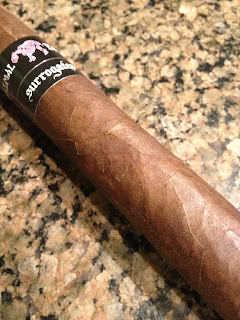 As I light up the cigar I am greeted by a cigar that is full body and full strength. There is no doubt that this cigar is a beast, and it hits you on all levels. There some definite pepper and spice notes with the cigar, and it is showing lots of leather, oak, seasoned woods and toasted nut qualities. The flavors are fairly dry, not rich like Nicaraguan tobacco is typically known for, but still enjoyable. I can say with confidence that I would not recommend this cigar to a novice smoker, and this is a beast of a cigar in terms of size and strength. The large ring gauge offers a very cool draw that produces tons of smoke and it is performing well in terms of construction. There is an even burn line to the cigar, practically razor sharp, and it is producing an ash that is slightly flaky, but holding on firmly to the end.

When I get into the second third of the cigar I find that the strength of the cigar begins to mellow out some. It is still at a full strength level, but not as strong as it was in the first third. I am getting some nice toasty flavors to the cigar in this third, and the nutty and wood flavors are much more present and on the forefront. There is a nice bit of leather and spice notes present as well, and I would say it is fairly balanced overall. With a full body smoking experience, and that full strength level, the cigar is performing wonderfully in this third and is a large and strong cigar. In terms of construction the cigar is still performing as well as it was in the first third and it has a nice even burn line with a sturdy ash that is slightly flaky. This is definitely a cigar that I would end the day with, and a cigar that I would have after a large meal. 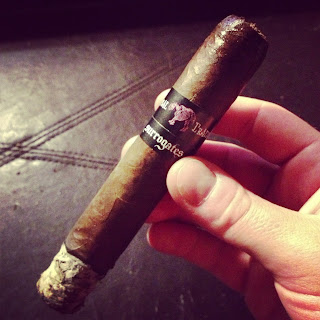 I have tried pairing this cigar with several beverages, and I can say that it is dominating many of them. All the beers I had got spanked, and I finally found a strong Zinfandel that did it some justice. The flavors are fairly similar to the second third in the finale, and it is showing those toast, nut and leather flavors. It definitely has some spice and pepper on the finish, and it has a finish of tobacco and cedar. The body and strength level in the final third is right at that full level, and I would say it finishes a little bit stronger than the second third, but softer than the first. The construction in this final third is terrific, and this is a smoke that performed wonderfully from beginning to end. The burn line was nearly razor sharp and the ash was firm on the end, though slightly flaky. The final draw on the cigar is cool with strong flavors, and it produces tons of smoke to the end.

While this cigar mellowed out some as it progressed out of the first third, this cigar is still a full tilt cigar. With full body flavors and a strength level that exceeds full, this is a cigar is meant for the seasoned smoker. I think it is the strongest cigar in L'Atelier's portfolio, and that is saying something when you look at the Bone Crusher. Construction was solid on the cigar from beginning to end, and it produces an ash that was slightly flaky, but holding on firmly. I do wonder how much ligero was used in the blend, and the regions from which the filler tobacco came from. With a ring gauge of this size the filler tobacco plays a huge role, and that puts pressure on having quality filler tobacco. I think many smokers who love big cigars with strong flavors and a lot of strength will love these cigars. As for me, this was an enjoyable cigar that I will have when I want a big and strong cigar. There are some guys out there who think a big cigar is stronger and "manlier," and the Animal Cracker verifies that "incorrect" theory. I am giving the smoke a solid 90 and look forward to seeing how they smoke with some age. I will say that the first one of these I smoke did some damage to me. 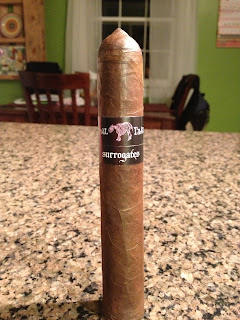