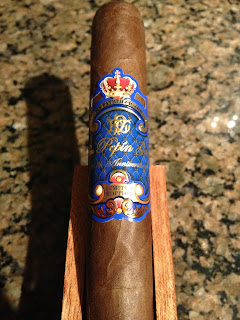 I continue to think of this time period as the Renaissance of Cigars. We will never be as good as we are know, and that is because of individuals in the industry, tobacco being used and the factories currently in place. Esteli is the modern day Florence of the cigar industry, and in that city is a family that has shaped the cigar industry into what it is today. Ten years ago they created a whole new play book, and got the ball rolling for many of the popular modern day manufacturers. At the time they were just in Miami, Florida, but as they grew in popularity, they outgrew their space there. They soon moved into a factory in Nicaragua as well, and then outgrew that factory. They now have a new and state of the art factory and are making cigars for all the big names in the industry. There is no doubt that everyone has at least smoked a cigar by the Garcia Family once, and to honor their ten years they created a gorgeous limitada.

Most thought that the family would make a My Father 10th Anniversary, but they knew that they needed to honor their ten years by creating a cigar that takes the name of where they began ten years ago. The cigar is the Don Pepin Garcia 10th Anniversary, and it is a whole new Don Pepin made at My Father Cigars S.A. The packaging on the cigar is stunning and the band is immaculate. Looking at the band I think of France nobility in the 17th and 18th century, and it would fit in at Versailles with ease. The cigar comes packaged in its individual coffin and comes in boxes of 14. Total production was limited to 2,000 boxes/28,000 cigars. The cigar comes in a single vitola that measures 6.5" with a 52 ring gauge and has a wrapper that is 2009 Ecuadorian Habano Seed. The binder and filler tobacco is Nicaraguan, and is composed with some Pelo de Oro tobacco. 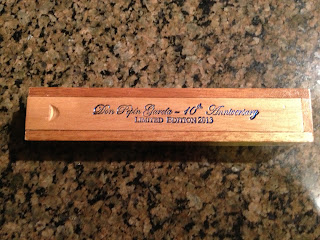 The cigar has a gorgeous triple cap, and it has a beautiful wrapper. It shows a terrific color that is between Natural and Colorado, and it is a faint milk chocolate coloring. There is a nice firmness to the cigar and it is great in hand. The wrapper is silky and smooth, and there are a few veins present throughout. I am getting an aroma of spices, leather, cedar and dried fruit at the foot, and there is an aroma of cedar and leather on the wrapper. There is a wonderful cold draw to the cigar that shows great flavors, and it is presenting qualities that are very un-Pepin like. In some ways I am finding the cigar to be a little bit more refined and unique, rather than showing that raw awesome Nicaraguan flavor that we typically see with Pepin.

The first third begins wonderfully and not showing those traditional Pepin pepper qualities. There is a great creaminess to the cigar, and it is pairing with some terrific cocoa notes as well. There are some stone fruit qualities to the cigar as well, peaches and nectarines, and there is a nice finish that is showing some leather, cedar and spice qualities. There are some white pepper notes to the spice level and it is a terrific smoke. I would say that the body and strength of the cigar is at a medium level, and it is nothing overpowering but a terrific way to begin the cigar. The construction on the cigar is terrific as well and it is producing an ash that is firm and charcoal in coloring. The burn line is razor sharp and I am getting a great amount of smoke with each draw. I can easily say that this is a great smoke thus far, and you will probably want to pick up a box of these. 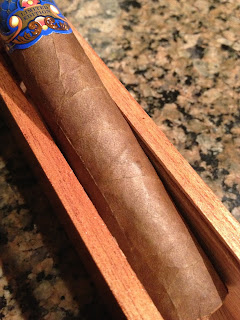 When I get into the second third of the cigar I find the flavors to be opening up a little more and showing some more spice that is familiar with Pepin smokes. I am still getting a terrific cocoa, cedar and cream notes to the cigar and there is a lovely finish of peaches and apricots with leather. I can say with confidence that this is a balanced cigar in terms of flavors, and there is  not one area that is really showcasing itself over others. The strength and the body of the cigar have increased to a medium to medium full level, but it is still an easy smoke that a lot of smokers could light up. To some, they could smoke it in the morning, and to others hey could smoke it in the evening or afternoon. The construction on the cigar is terrific, and I am getting a razor sharp burn line that has a beautiful charcoal ash on the end.

When I get into the final third I see a rise in the rich and earthy notes, and I am getting this terrific cocoa flavor profile that is paired with coffee, earth and cedar. There are some definite leather notes present as well, and it is a cigar that is growing in terms of strength and body. There are still some stone fruit notes on the finish, but are more subtle now, while some creamy flavors are more dominant. The strength and body of the cigar are at a medium full level in this third and I am loving how the cigar is finishing. To me this is a perfect example of a cigar growing, but growing in a manner that is manageable for many smokers. The construction on the cigar is terrific in the final third and it leaves me as the smokers with a great cool draw that produces tons of flavors, and a cigar that has a razor sharp burn line with a solid charcoal colored ash. 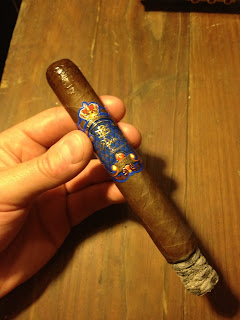 This is an outstanding cigar and I believe it to be the best stick by Don Pepin Garcia. I think it dominates any other Don Pepin or My Father labeled cigar in current production, the original Centurion could compete with this smoke. It possesses so much balance from beginning to end, and the profile makes it a cigar any and all could enjoy. There is a level of complexity that a connoisseur would truly pick out, but a less experienced smoker could enjoy some of the grounded flavors. The construction that came along with the cigar was terrific from the two sticks I smoked, and it produced a beautiful ash as well. It is funny to talk about construction when you talk about My Father Cigars S.A., and that is because the factory does a fantastic job in terms of construction and quality control. This is definitely a cigar that will be loved by so many and do well in reviews. It is an amazing limitada that will be missed when it is gone as well. I am giving this cigar a solid 95 and will look forward to smoking more and holding on to plenty. 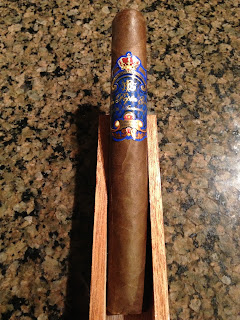