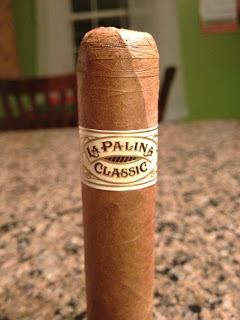 Of the smokes I have had that were showcased at the show this year I have to say that La Palina is one of companies that had great new releases. An obvious is My Father Cigars with the new Don Pepin Garcia 10th Anniversary. My Father Cigars may have only release one new cigar, but it was awesome. La Palina was acting fairly low key going into the show, and I thought that they had gone big beforehand with the La Palina Goldie Laguito No. 5. I was wrong of course, and when they announced all the new smokes they would have, line extensions really, I was excited to try them. Most of them are small cigar offerings, coronas, lanceros and panatelas, but one stood out from those. It was the La Palina Classic Short Robusto.

Measuring 4.5" with a 58 ring gauge I am surprised to say that I love how this cigar feels in hand. It may have a large ring gauge, but it works with the length and does not come off as being over the top. Like the original smokes in the Classic line, the Short Robusto is made by PDR and comes with a wrapper that is Brazilian grown Habano seed. The binder is from Ecuador, and the fillers are a blend of Dominican and Nicaraguan tobacco. The cigar comes with a great cap and  the wrapper is wonderful to touch. It shows some oils, but very few, and it really has this hide like texture. The coloring is that of a lovely Colorado, and it has an aroma of strong spices, hay, grass, seasoned wood and leather. 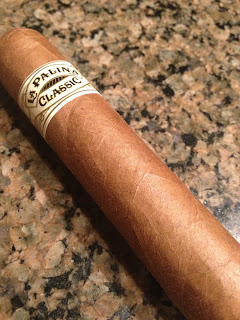 The cigar opens up by showing a nice leather flavor that is paired with a great bit of spices. I am picking up noticeable black pepper qualities and there are also some seasoned oak and cedar notes. There is an underlying earthy quality with the cigar and it finishes by showing some toasty and nutty notes. It has a very dry flavor profile and I would say that it is a perfect summer cigar because of the qualities. I would say that the strength of the cigar is at a medium level and the body of the cigar is as well. It definitely possesses a quality that could pair with almost any beverage and that is always great for pure enjoyment. The construction of the cigar is solid as well and it produces a nearly razor sharp burn line that is showing a solid ash that is dark gray in coloring and remaining on the end firmly.

In the second  third of the cigar I find that the flavors remain fairly consistent with the first third, but I would say the wood, leather and spice notes are stronger than before. The black pepper qualities are fairly strong in third if you ask me, and it plays off of the toast and nut qualities very well. The earthy flavors have really taken a back seat now, but they offer a little balance to the cigar as well overall on the finish. The strength and body of the cigar in this third have reached a level between medium and medium full and it has a dry finish that is spicy on the retro hale. The construction in this third was perfect and it still produced that solid dark gray ash that was holding on firmly to the end. This is definitely an everyday cigar that I could enjoy at anytime. 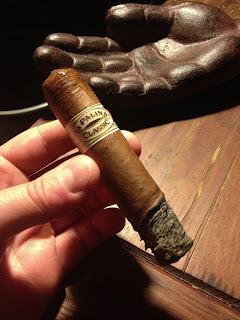 When I get into the final third of the cigar I find the flavor profile from the first third to be making a comeback and I would say the balance is making a return. The black pepper notes are still present, but not as noticeable as they were in the second third. The earthy, toasty and nutty notes are making a stronger presence and matching up against the wood and leather qualities. The strength and body are returning to that medium level that they were in the first third, and it is a smooth finish for the smoke. You can definitely tell that the cigar hits the sweet spot in the second third, and the final third is a nice way of making the smoker want to light up another one afterwards to get back there. The construction is perfect to the end and it shows that razor sharp burn line with a nice dark gray ash. I smoke the cigar down to the wide nub, and the last draw is cool with pepper and leather notes.

The La Palina Classic is a line that is growing on me more and more, and the more I smoke it the more I can see what a great addition it is to the brand portfolio. When the line was first introduced it was a great way of introducing many smokers to the La Palina brand, and this year the company did a terrific job at releasing new vitolas to attract some of the smokers that loved La Palina before this line was released. To me it was a line that was meant to catch the everyday smoker, and now it is a line that speaks to the big time cigars smokers and the cigar nerds like myself. I feel that the blend was a solid blend when first released, but now we are able to smoke the cigar in a whole new way with a nice stout short robusto, a corona and lancero. The construction was solid from beginning to end and it had a core flavor profile that was very tasty. I am giving this cigar a solid 90 and I look forward to smoke the additional vitolas. 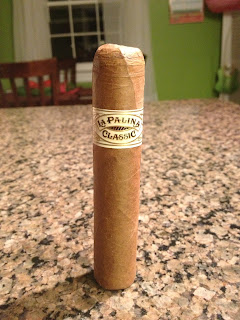