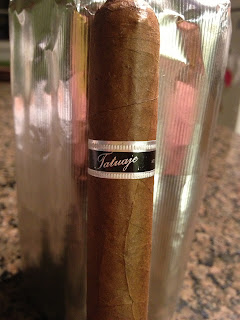 In 2007 Pete Johnson blended a cigar that was to be his personal cigar. A year later the greatness of that cigar got out and it was released in very limited quantities to the market. It was then offered in small packs at events with purchases, but after that it was gone. Like the One Ring, it was not to be seen for many years but only whispered about. After five years of remaining hidden the cigar is now making its return for a one time limited release. The cigar is going to be released this December in melamine jars is will be honoring the close of Tatuaje's 10th Anniversary. After this release Pete has said the cigar will be no more. Of course Pete had some lying around that he rolled earlier this year and decided to spoil some early retailers with a soft release. These cigars are not packaged in the melamine jars, and not be counted in that limited production, but they are in fact the same smoke. 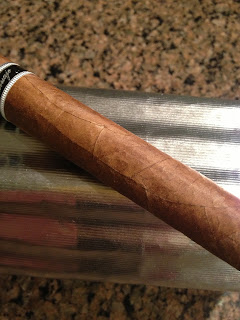 With the soft release of the Black Label Corona Gorda 2013 Pete decided to release 530 bundles of 19 cigars. In December Pete will release the scheduled 10,000 bundles, and those cigars will be in in the melamine jars of 19 cigars. Like all Black Label smokes that Pete has released, the cigar is a Nicaraguan puro and features a Nicaraguan Sun Grown Criollo wrapper from Esteli. This particular smoke features a different band than previous Black Label smokes, a newer and more spruced up version, but it still features the same rustic qualities that the Black Label possesses. The Corona Gorda comes with a fuma style cap and has a silky wrapper that possesses a good number of veins. The coloring of the cigar is a dark Natural coloring, slight bits of Colorado, and it has a nice closed foot. There is an aroma of leather, cocoa, dried fruit and spice at the foot, and the wrapper shows a little bit more leather notes than anything else. This corona gorda is a true corona gorda, and it measures 5 5/8" with a 46 ring gauge.

The cigar begins by showing some nice fruity and orange peel notes. I am getting some chocolate notes with that and it has a finish that is showing some great leather and woody qualities. There is a nice spice level with the cigar and it is showing those great Black Label flavors that I know and love. I can say with certainty that I am digging this smoke and it is a great corona gorda. There is so much balance with the cigar and it is showing a solid medium level in terms of strength and body. The construction on the cigar is fantastic and it possesses perfect burn line with a lovely charcoal colored ash. It is a firm ash that shows no signs of falling off, and there is a great amount of smoke being produced with each draw. Overall I am loving this cigar and I know that it is going to do very well with smokers. 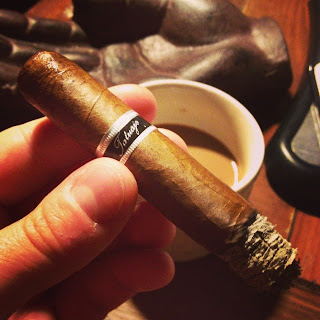 I am in the second third of the cigar now and it is smoking just as great as it was before. There is a nice bit of chocolate and fruity notes showing up on the forefront and it has a nice sweet wood flavor profile with that. I am getting the citrus and leather qualities on the finish, and it has a nice bit of spice playing alongside that. The body and strength of the cigar is remaining at that medium level and it is a prime example of a balanced cigar. This is a cigar that I could smoke at anytime of day and enjoy it thoroughly. The construction on the cigar is terrific and it showing that even burn line with a lovely charcoal ash. This is simply an incredible cigar that so many could and will enjoy. I would not say that the smoke is overly attractive, but it tastes great.

The final third is showing all of those great qualities from the second third and I do not want anything to change. There is that great chocolate flavor profile going on and it is pairing with those nice fruity and citrus notes. I am getting those leather, wood and spice notes as well, and it is a phenomenal cigar that does not lack in terms of flavors. The construction on the cigar is terrific, just as it has been throughout, and is showing that razor sharp burn line with a beautiful charcoal colored ash. The strength and body are remaining at that medium level, and it is a cigar that I love and could smoke back to back throughout the day. To me it is a cigar that shows so much balance and everything you could ask for in a  wonderful cigar. The final draw shows tons of flavors, all of which have been present since the beginning, and it has a nice cool draw to the nub. 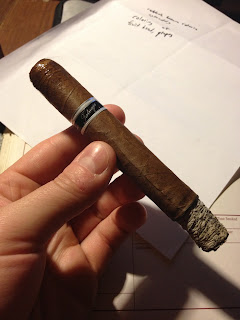 This is a cigar that shows the greatness in the corona gorda size. I really do believe it to be the perfect size because it offers smokers the opportunity to pick up on the filler and wrapper tobacco at a great ratio. This was a classic example of Pete showing the greatness of Nicaraguan Criollo, and I believe it is a wrapper that does not get as much attention as it deserves. The Black Label Corona Gorda is a cigar that shows consistency from stick to stick, and it also possesses an amazing flavor profile. I have always been a fan of the Black Label, I love the Petit Lancero, and this cigar shows all those great flavors with a little bit more from the filler. I know I will be enjoying these as often as possible, but I also want to savor them because when they are gone they are gone. If you are a fan of Tatuaje you would be a fool not to buy a jar when released and even those guys who are not huge Tat fans should pick a handful up. We will be seeing this cigar in a lot of guys Top 25 Cigars of 2013 and I look forward to my next experience with the cigar. This cigar gets an easy 94. 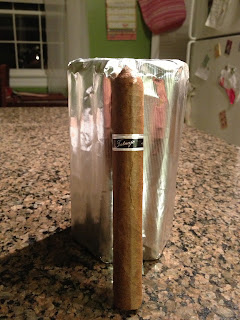