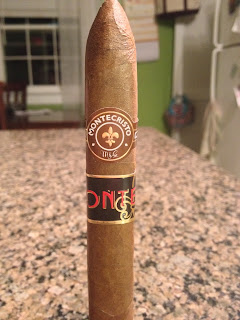 Hands down the most recognizable brand in the world, Montecristo can be pointed out by everyone out there. Whether you are a cigar smoker or not, you could tell me what cigar is a Montecristo by looking at the image and not reading the fine print. Since 1935 the cigar has been a success, and the cigar actually originates because the rollers in the factories of Cuba loved hearing the story of The Count of Montecristo. The brand was created by Alonso Menéndez and he was also responsible for the resurrection of the H. Upmann brand. In 1961 the brand was nationalized and eventually there was an Altadis version to the the Cuban Montecristo. This year we saw the tenth addition to the national Altadis Montecristo brand, and that cigar was the Montecristo MONTE.

The MONTE really takes the condensed name that many smokers call Montecristo these days, and is available in a few common vitola offerings. For this review I was given the Jacopo No. 2, and the cigar actually takes its name from the character Jacopo in the Count of Monte Cristo. It is the only box pressed offering in the line and measures 6 1/8" with a 54 ring gauge. The cigar comes with an Ecuadorian Habano wrapper and has a dual binder that is Dominican Olor and Nicaraguan Corojo. The filler is a blend of aged Dominican tobacco, and is blended by the Grupo de Maestros. The cigar has a smooth wrapper with few oils and has some minor tooth and veins throughout. The cigar is beautifully pressed and slightly soft overall. The color is between Natural and Colorado in coloring, and it has an aroma of tobacco, cream, earth and chocolate. 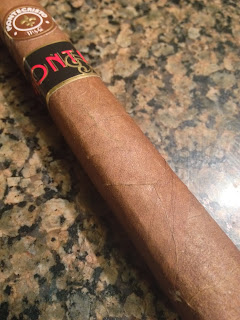 The cigar begins by showing some lovely flavors that are the modern Montecristo flavors. There are some meaty, leather, cinnamon and red pepper notes to begin with, but I eventually begin to pick up some cocoa and nutmeg notes on the finish. It reminds me in some ways of the Montecristo New York, but not as complex overall. The cigar is producing a beautiful light gray ash that is holding on firmly to the cigar and it has a razor sharp burn line with that. The cigar is producing a wonderful amount of smoke and the draw is perfect and cool. To me the strength of the cigar is at a medium to medium level and the body itself is closer to the medium side of things. It is an enjoyable firs third that shows great qualities, and it is definitely the modern Montecristo. 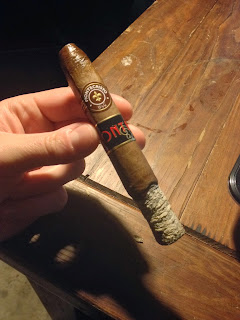 I am in the second third of the cigar now and I am finding the flavors to be fairly similar to the first third. To be honest with you there is not much fluctuation or a single flavor sticking out right now. I am still getting the blend of cinnamon, red pepper, meat and leather flavors, and it has that wonderful cocoa and nutmeg finish. The construction in this third is as solid as it was in the first and it is producing a razor sharp burn line with that lovely charcoal ash that is holding on firmly at the end. The draw is perfect for me, not too loose, but a nice resistance that is just right. I am getting some great smoke produced with each draw and I think a lot of smokers could enjoy this cigar. I would say the body and strength are close to medium in this third and it will definitely reach out to a lot of modern cigar smokers.

When I get into the final third of the cigar I find that the finish is richer than before. I would say the meaty and leather flavors have left and it is now showing those cocoa and nutmeg notes more so than before. There are still some peppery and cinnamon flavors with that, but it is mostly that of cocoa and nutmeg. The finish to the cigar is smooth and creamy and I am getting a lot of smoke with each draw taken. I would say that the finish strength and body is that of the second third and it is at a solid medium level. Some might find it a little bit stronger than myself, but it is a medium cigar through and through. The construction in the final third is terrific and it is producing that razor sharp burn line with a firm ash that is light gray in coloring. To the end the cigar produces a cool draw and lovely flavors that I would come back to and enjoy in the future. 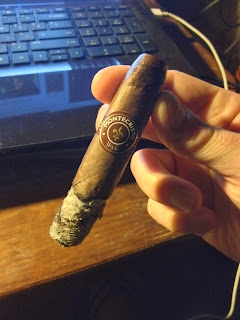 When you look at the MONTE and compare it with the Epic and New York you can get disappointed, but I have discovered what this cigar actually is though. This is the modern everyday Montecristo. It is right between the Classic and Epic in terms of body, strength and complexity, and a cigar that is available at an affordable price. It will do well in reaching out to a lot of new modern day smokers, and I say that because Habano is the new Connecticut. I also feel that this cigar is a regular production, but lesser, version of the New York. It is not in the same playing field as the New York or the Epic, but is more readily available and affordable. The cigar produced a wonderful burn line from beginning to end and with that was a beautiful light gray ash. The flavors were fairly consistent and while not overly complex were enjoyable. I would say that this cigar gets between an 88 and 89, and from what I have heard the box pressed torpedo was the best option. I am giving this cigar an 89 and I would definitely recommend it to some smokers out there.
Seth's Humidor Rating: 89 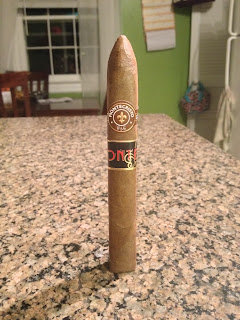 * cigars for this assessment were provided to me Altadis for review.