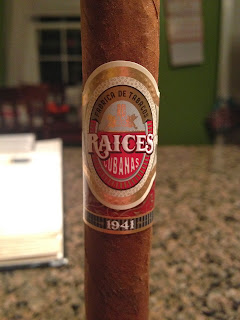 In 1941 a man by the name of Romay Endemaño was born in Baez, Cuba. This man would eventually leave Cuba though and arrive in Danlis, Honduras. It is here that he began Fabrica de Tabacos Raíces Cubanas S. de R.L. If you are reading this post you know the factory and the cigars that have come out of it. Companies like Casa Fernandez, Illusione, Alec Bradley, Viaje, La Palina, Ocean State Cigars and 262 Cigars have used the factory, and used it well. You see so many of these companies use it who working with Casa Fernandez that you thought it was theirs, but it really isn't. For a long time the factory has been making cigars for other companies, but never made one themselves with their name on it. Well, the time has come for them to make their own line.

The Raíces Cubanas 1941 is a cigar that is distributed by Alec Bradley, but is actually not an Alec Bradley blend. The cigar is blended by the Endemaño Family and everything up until distribution is taken care of by their company. The cigar comes in four modern day sizes and for this review I chose the Churchill. The cigar measures 7" and has a 50 ring gauge so it is a little larger than your typical Churchill. The wrapper on the cigar is Honduran with two binders that are Nicaraguan and Honduran, and is finished with a filler blend of Honduran and Nicaraguan tobacco. They do not give the seed varietal, but I am sure you can imagine, given the factory, what seeds are used. The cigar has a lovely triple cap and a wrapper that is very light in coloring. It has some Colorado qualities, and I would say it is Colorado Claro overall. To me it has a nice weathered wood coloring. There are some veins present with the cigar and it is fairly gritty to touch. The cigar is firm in hand and I am getting an aroma of sweet nuts, sweet cedar, tobacco, hay, raisins and tobacco. 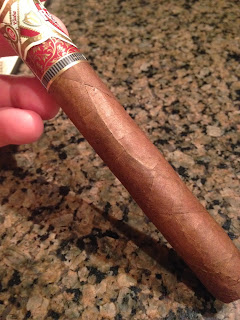 The cigar begins by showing some lovely sweet nut and cedar notes. I am getting some spicy characteristics with that and it has a lovely tobacco flavor profile as well. There are some definite tobacco and leather qualities present as well and it is fairly complex smoke. The cigar has a nice bit of balance to that and it is a very tasty first third. I would say the strength is around the medium level in this third and the body is in the same ballpark. This is a cigar I could have in the afternoon or morning with no issue what so ever. In terms of construction the cigar produces a razor sharp burn line and a solid ash on the end. The ash is holding on firmly and it has a nice charcoal coloring. So far this is a nice first third and a very different cigar than I would expect from the factory. It has a dryer flavor profile and it is a cigar I would have in the summer and fall. 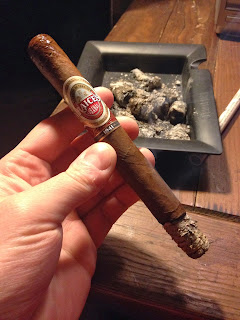 I am in the second third of the cigar now and the cigar has tamed some in terms of strength and body. I would say it is at a level that is slightly softer than medium, but still fairly close to that level. The cigar is still showing lots of sweet nut and cedar notes overall, and the tobacco flavors have increased as well. There are still some leather notes from before, but it is softer now. The spice and pepper notes are much softer in this third and it is a nice change of pace. To me the cigar opens up more and shows its subtle qualities which is nice. It has lost some of that peppery pop from before, but that is not a bad thing. In terms of construction the cigar is still top notch and I am getting a razor sharp burn line with that charcoal ash holding on firmly at the end. There is a nice bit of smoke with each draw and it is a cool draw at that.

When I get into the final third the cigar continues to remain fairly soft overall and it is a continuation of the medium body and strength level from the second third. The flavor profile is still fairly sweet, but at the same time dry. It does not show any rich characteristics and is a unique smoke coming out of Raíces. The sweet cedar and nutty notes were still dominant, and I was getting some almond walnuts mostly. It had that aged tobacco and leather quality as well, and the finish shows bits of light spices and raisins. I definitely thought the flavor profile got more enjoyable as the cigar progressed, and it was in the final third that it really showed its true colors. The construction remained perfect from beginning to end and it had that razor sharp burn line with the solid charcoal color ash. I found the final draw cool and producing a nice flavorful finish. 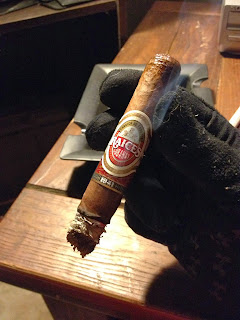 I really liked this cigar and found it much different than a lot of other stuff coming out of the same factory. There are times when Illusione, La Palina, Alec Bradley, 262 and Casa Fernandez can seem pretty similar, but this is very different. I would say that Illusione and Casa Fernandez are more unique than the others, but when a group of individuals are using similar tobacco and the same factory this will happen. The same is true for some cigars coming out of My Father, Alianza, and Nestor's factories. The cigar had impeccable construction from beginning to end and a beautiful ash with that. I found the medium bodied smoke was easy for me, and it is a cigar I could have any time of day. The flavor profile is what really pops out at you when you smoke this cigar because it is something different. In some ways I think this is one of the better blends to come out of the factory. I am giving this cigar a solid 90 and would pick them up if I saw them in the humidor and had none at home. 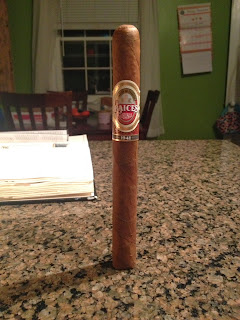