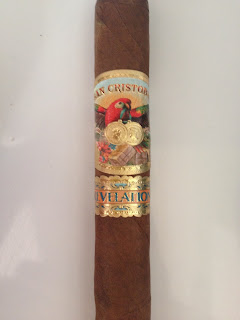 In 2007 Ashton Cigars released their first cigar with Don Pepin Garcia. The cigar was San Cristobal and it was a cigar that would begin a great relationship between the two companies. Since then the two companies have produced multiple cigars together, and a lot of them have been successful ones at that. I don't smoke a lot of Ashton stuff, and when I do I am smoking an ESG or an original San Cristobal. I don't smoke any of the other stuff from the company and I was never a fan of the extensions to the original San Cristobal. When I saw that there would be a fourth installment to the line though I decided to pick some up. You never judge a cigar without smoking it, so I picked up a couple and I am just now getting to reviewing them.

The Revelation is the fourth installment in the San Cristobal brand, and for this review I chose the Legend vitola. The cigar measures 6.2" with a 52 ring gauge and has a different band than the original San Cristobal. I never smoked the Elegencia, which I am seeing now has a different band, but this one does as well. (I am not going to get going in comparing the bands) The cigar features an Ecuadorian Sumatra wrapper and then has Nicaraguan binder and filler tobacco. Like all smokes in the San Cristobal brand the cigar is made by My Father Cigars in Esteli, Nicaragua. The cigar is nicely pressed and it has a simple wrapper that is between Natural and Colorado in coloring. There are a few minor veins present throughout and there is very little tooth throughout. The foot of the cigar has an aroma that is chocolaty, and I am getting some spice, tobacco and cedar notes with that. The wrapper is not as rich, but shows those nice cedar and tobacco qualities. The cigar is fairly firm except at the foot which is surprisingly soft, almost like there is little tobacco there. 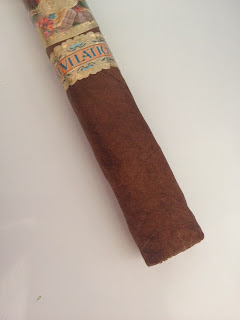 The first third of the cigar is showing excellent construction and when it comes to cigars out of My Father Cigars I do not even know why I even bother talking about construction. The burn line is nice and even, nearly razor sharp, and it is producing a lovely charcoal colored ash that has a nice dark gray coloring. The flavors are showing some lovely cedar and nutty qualities, and there is a nice bit of tobacco and cocoa qualities with that. There is a faint bit of spice present as well and it is a subtle and enjoyable on the finish. To me the strength level is at a solid medium level and the body is there as well. It might be at a medium full level to some, but for me it is a solid medium. So far this is an enjoyable Ecuadorian Sumatra wrapper and it is really balanced with the Nicaraguan tobacco in the filler and binder. 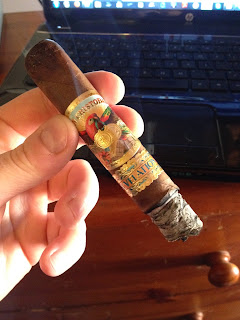 The second third shows some similarities to the first third, but I am getting a rise in caramel notes that are pairing with the sweet cedar and subtle spice notes. The cigar has that core tobacco and cocoa quality as well, and it is a classic Ecuadorian Sumatra wrapper cigar with Nicaraguan tobacco as well. It is not overly complex, but it is definitely entertaining.The construction is still top notch with the cigar and it is producing a lovely dark charcoal ash on a beautiful razor sharp burn line. There is a beautiful draw with the cigar and it is a cigar I could smoke back to back. The body and strength are still at that medium level from before and it is just a smooth and easy cigar. There are really no worries you can have when smoking this cigar, and it is a cigar you sit back with and relax.

The final third has a terrific conclusion and there are tons of flavors popping up here and there. I am getting some clove and cinnamon notes throughout and there is a strong caramel flavor profile as well. I am getting some hot chocolate notes throughout and it also has those woody, tobacco and sweet cedar flavors. The flavors are incredibly smooth and delicious, and this is a finish that makes you light up another one right away. The body finishes at a medium level and the strength is right there in the same category as well. To me this is a cigar I would begin the day with and have no problem smoking it throughout the day. Construction is a no brainer as I am getting a razor sharp burn line to the nub and a nice charcoal ash with that. The final draw is very cool with a nice bit of flavors and a great amount of smoke with that. 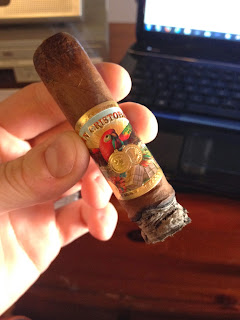 This was a tasty smoke and a great addition to the San Cristobal brand. I have not been a fan of the other San Cristobal releases, but this was a nice way of restoring the name. I remember when the original San Cristobal first came out, it was amazing. The cigars still smoke wonderful, but there is something about a cigar when it is first released. The Revelation is a nice use of the Ecuadorian Sumatra wrapper and it is a cigar I would reach for again. When I think of Ecuadorian Sumatra I always think of a box pressed cigar, I think the two go hand in hand with most manufacturers and they seem to smoke better in a box pressed format anyways. The cigar really grew in terms of flavors the further it progressed and from beginning to end the construction was nothing but terrific. I felt the body and strength were fairly constant as well and this is a cigar that many will enjoy. I am giving this cigar a solid 90 rating, and I think it will get better in time. 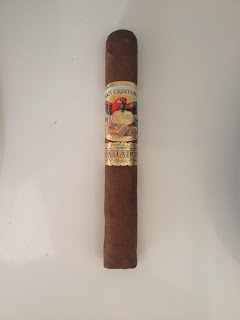