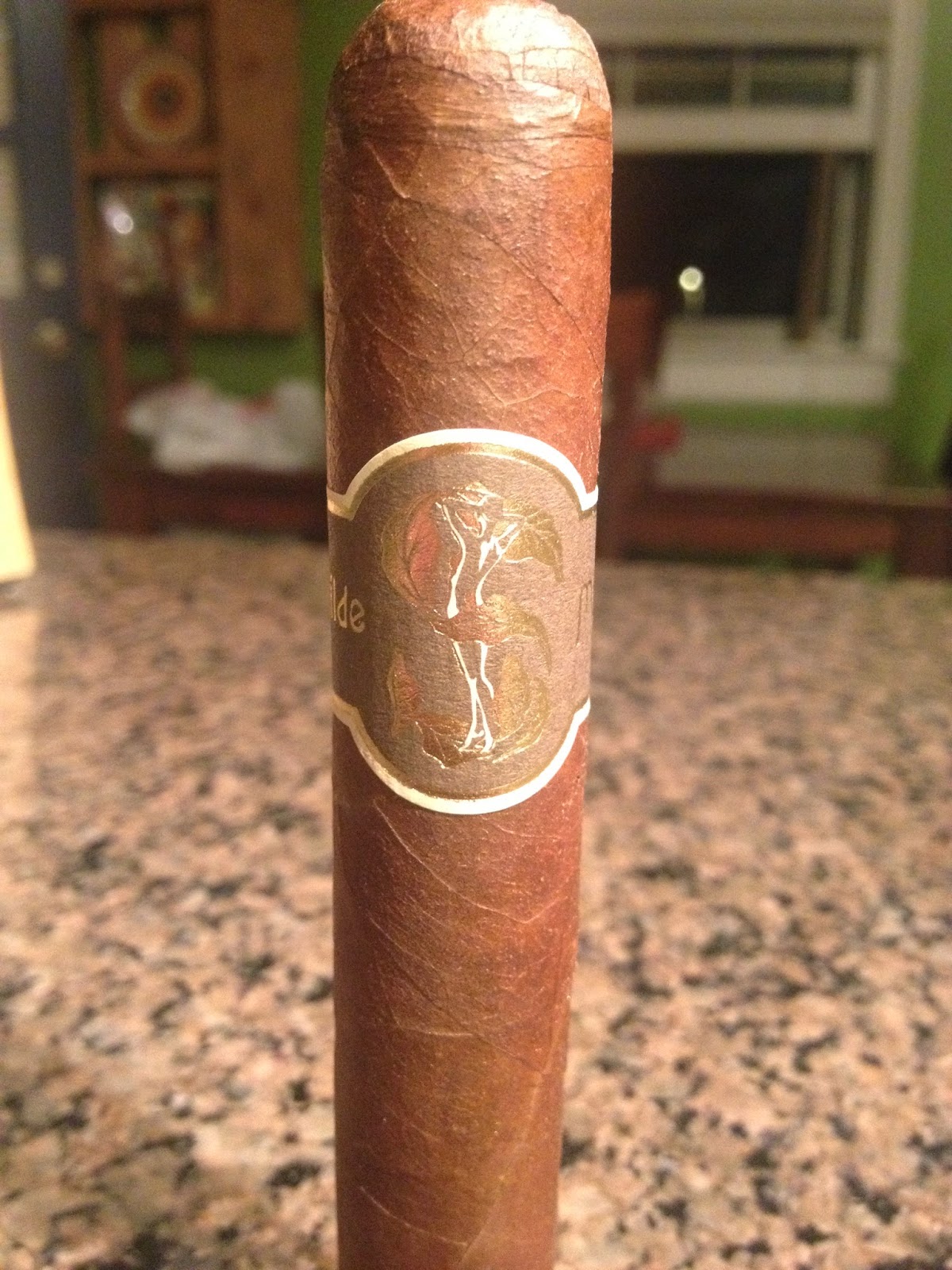 In the summer of 2013 a man by the name of Jose Seijas made a return to the cigar industry. For those of you who do not know who Jose Seijas is, he is an individual that has been in the cigar industry for over 40 years and had spent his career with Altadis USA Inc. When he retired from the company he was Vice President and General Manager of Tabacalera de Garcia, Ltd., and while there he oversaw the production of the Dominican Montecristo, Romeo y Julieta and H. Upmann  to say a few. He retired from the company in 2012 and managed to fly under the radar for a year before making his return. With his return in the summer of 2013 though he announced that he would be forming his own company, and that it would be called Matilde Cigars. He would still be based out of the Dominican Republic, using a lot of Dominican tobacco, and his first line would be the Matile Renacer.

The Renacer, Spanish for to be reborn, is finished with an Ecuadorian Habano wrapper and has a binder that  is Dominican. The filler is a blend of Dominican and Nicaraguan tobacco and hails from the Dominican Republic. The line is being made in the new factory, Tabacalera La Matilde, and the Renacer comes in four vitolas. For this review I chose the robusto and it measures 5 1/4" with a 54 ring gauge. The wrapper is incredibly oily to touch and it has a beautiful Colorado Maduro coloring as well. There are some soft veins that are noticeable here and there throughout the wrapper and it has a nice silky texture as well. It is slightly firm with a solid cap and it has an aroma of soft sweet spices, leather, wood and earth at the foot, with an aroma of leather and spices on the wrapper. There is a lovely cold draw to the cigar and it is a firm draw that presents some terrific flavors. 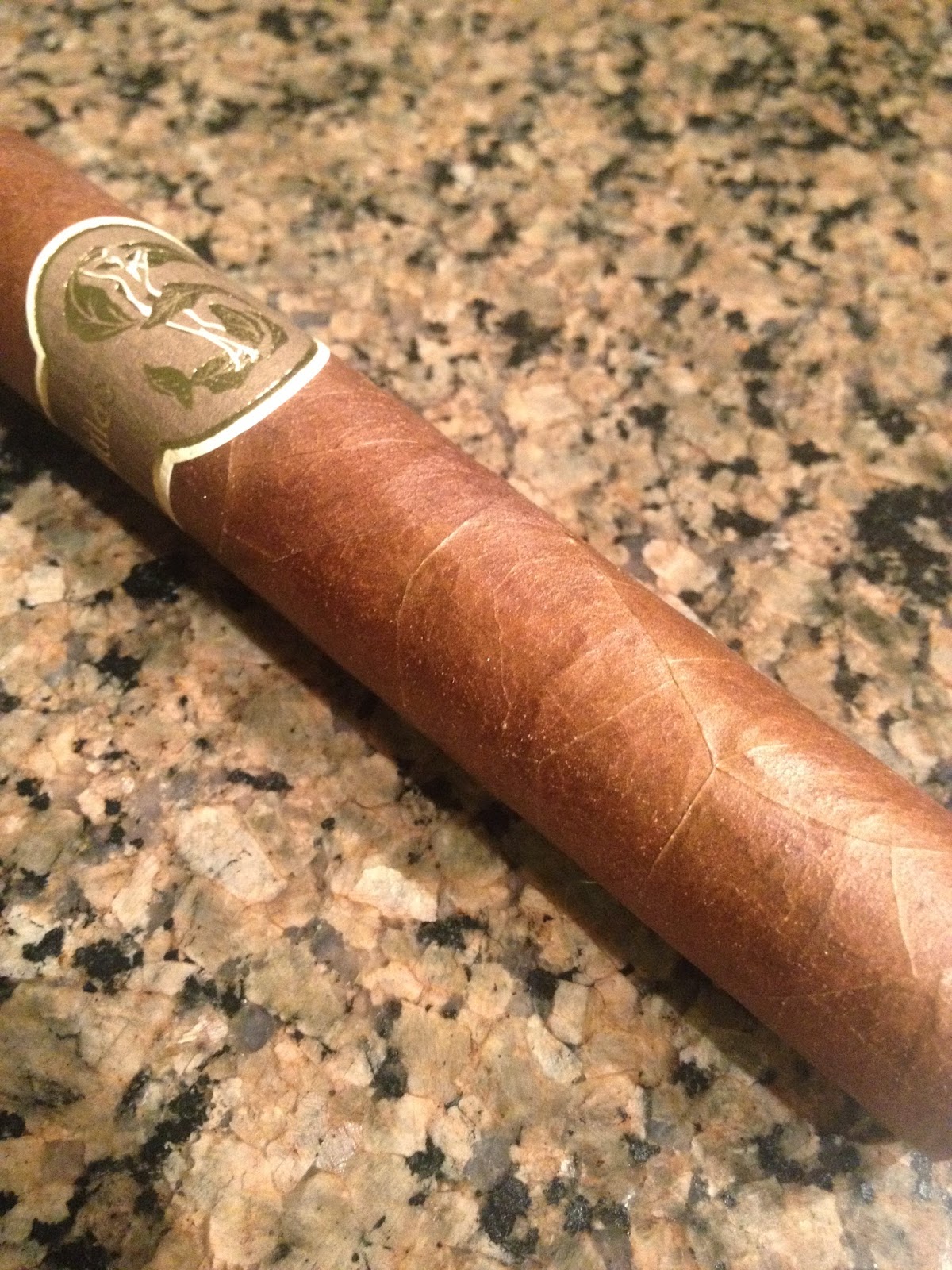 Upon lighting the cigar I am greeted by some soft espresso bean notes and it is accompanied by some solid toast and woody notes. There are some bits of dark chocolate present and the cigar is filling and very balanced. It is not overly sweet and rich, but at the same time not dry or producing flavors that are overly spicy. There are some cream, cedar and spice notes present as well, and it is a complex smoke that really touches a lot of areas on the palate. With some lovely flavors, the cigar is smoking fairly well and producing an ash that is flaky in texture but still holding on firmly to the foot. The coloring is that of charcoal gray and there are some light areas with some dark areas present as well. In terms of strength and body I am finding that the body is right at a medium full level. It is a perfect evening cigar for most smokers, and it is a cigar that I could have in the afternoon or evening. The strength on the other hand is right at a medium level and it is makes it a smooth cigar to smoke for many. 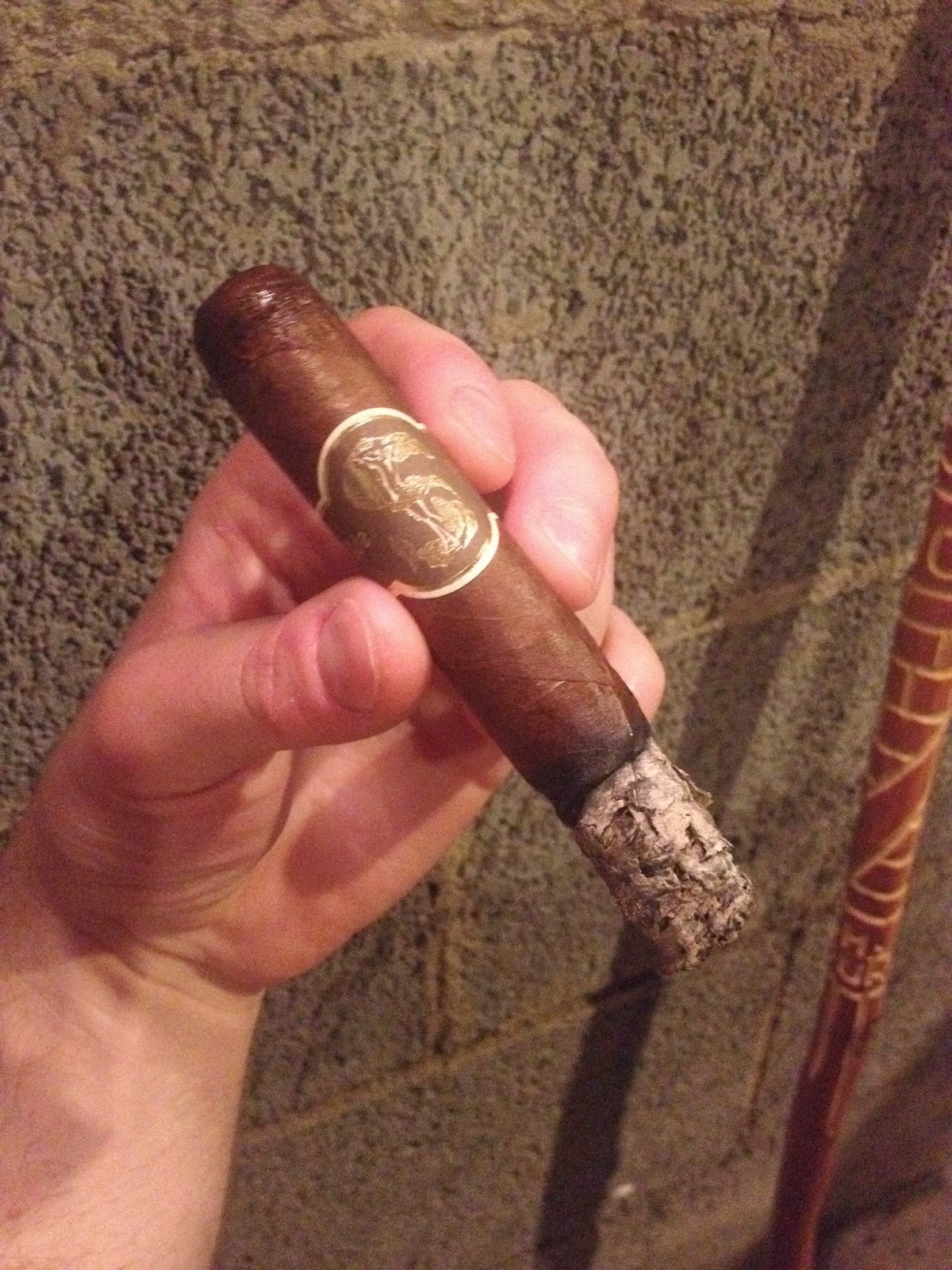 I am in the second third of the cigar now and it is showing some of those terrific flavors from the first third and more. I am getting some nice dark chocolate notes that are not overly sweet, but there is a nice sweet level present. There are some espresso bean, oak and earthy notes present as well, and it has a finish that is showing some soft pepper and spice notes as well. There is a smooth cream and cedar flavor profile present as well and this is a terrific second third. The construction is similar to that of the first third in that it is producing an uneven burn line, but I believe that has to do with the oils present on the wrapper. It is not terribly uneven, just wavy, and it is producing an ash that has some light and dark gray coloring and it is holding on tight while being flaky in nature. I would classify the cigar as having a medium strength level, but the body is definitely medium full. 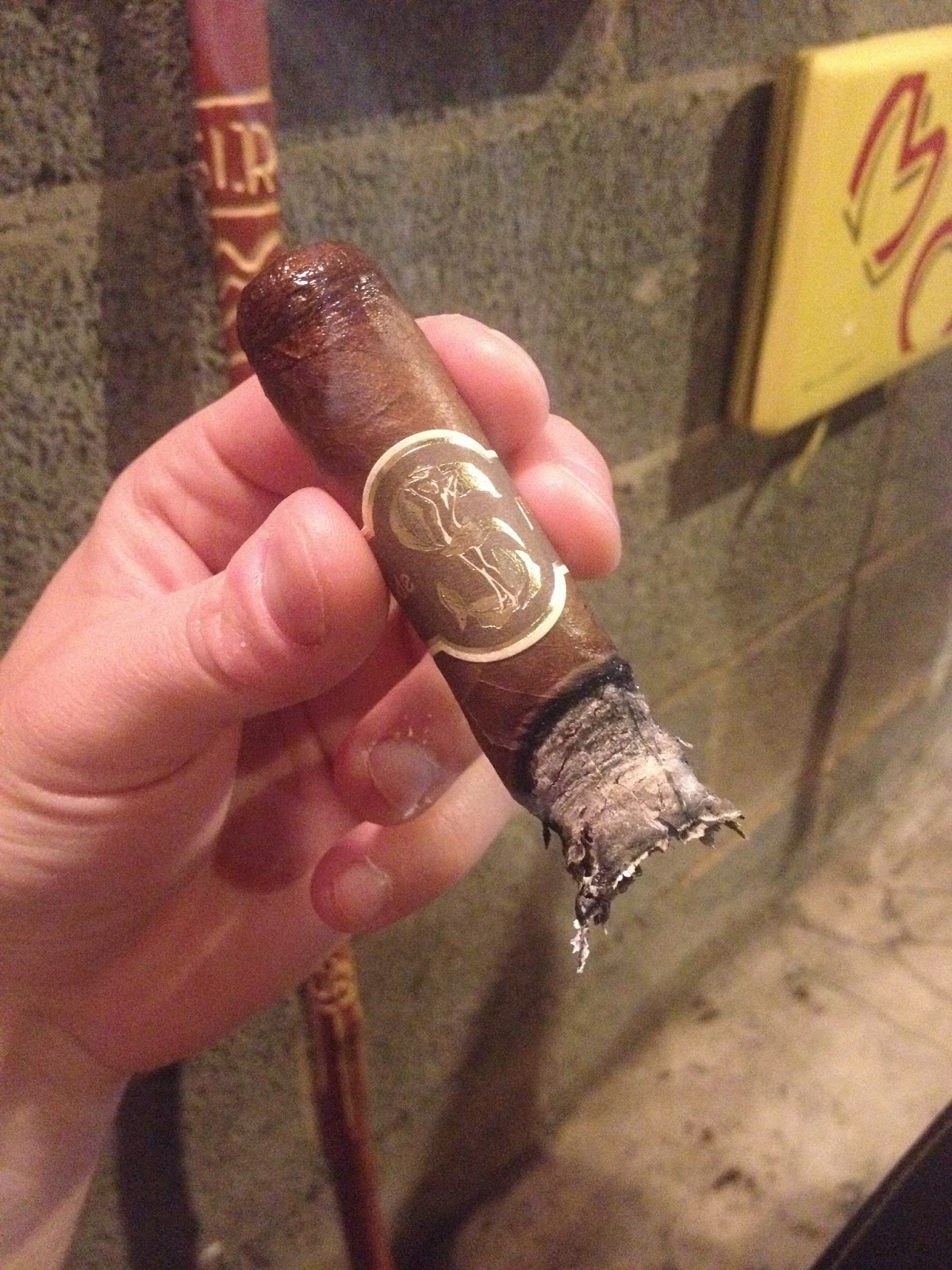 I am in the final third of the cigar  now and I am seeing a rise in some toasted nut flavors and it has some peanut qualities to it. There are some toast flavors present as well and it has a wonderful pairing of espresso beans with that. There are some soft dark chocolate notes present with that as well and it adds just a slight bit of sweetness to a nice flavor profile. The finish of the cigar is smooth and spicy, and it is showing soft pepper notes, cream and cedar on the finish. The cigar continues to show that medium full body in the final third and with that is that medium strength level. To me it is a perfect evening cigar for many smokers and it is a cigar I would have in the late afternoon and throughout the evening. I could smoke this in the morning with a cup of black coffee, but for the most part it is a cigar I would have in the later part of the day. In terms of construction the cigar continues to show the qualities from the first and second third and it has a wavy burn line with that solid dark charcoal coloring ash that is flaky but holding on well.

Jose really came out of the gates strong with this cigar and it is a cigar that is terrific now, but I think if you age these sticks as well they will get even better. To me it is an elegant cigar and a cigar that any connoisseur would enjoy. There is a complex bouquet of flavors present from beginning to end and it has a nice bit of transitioning with that.The wrapper on the cigars I smoked was so oily and wonderful, and while it may have played a factor in why the cigar smoked a little wavy, it is because of the oils present that I believe it will age well in months and year to come. The body present with the cigar was great, really grabbed your attention, and I liked that the strength was a little bit less overall. With the robusto and corona smoked, you can really pick up the differences between each size. I really loved the corona, you got that great wrapper, but with the robusto there were some terrific coffee, cream and chocolate notes. I am giving this cigar a 92 and look forward to smoking it in the months and years to come. 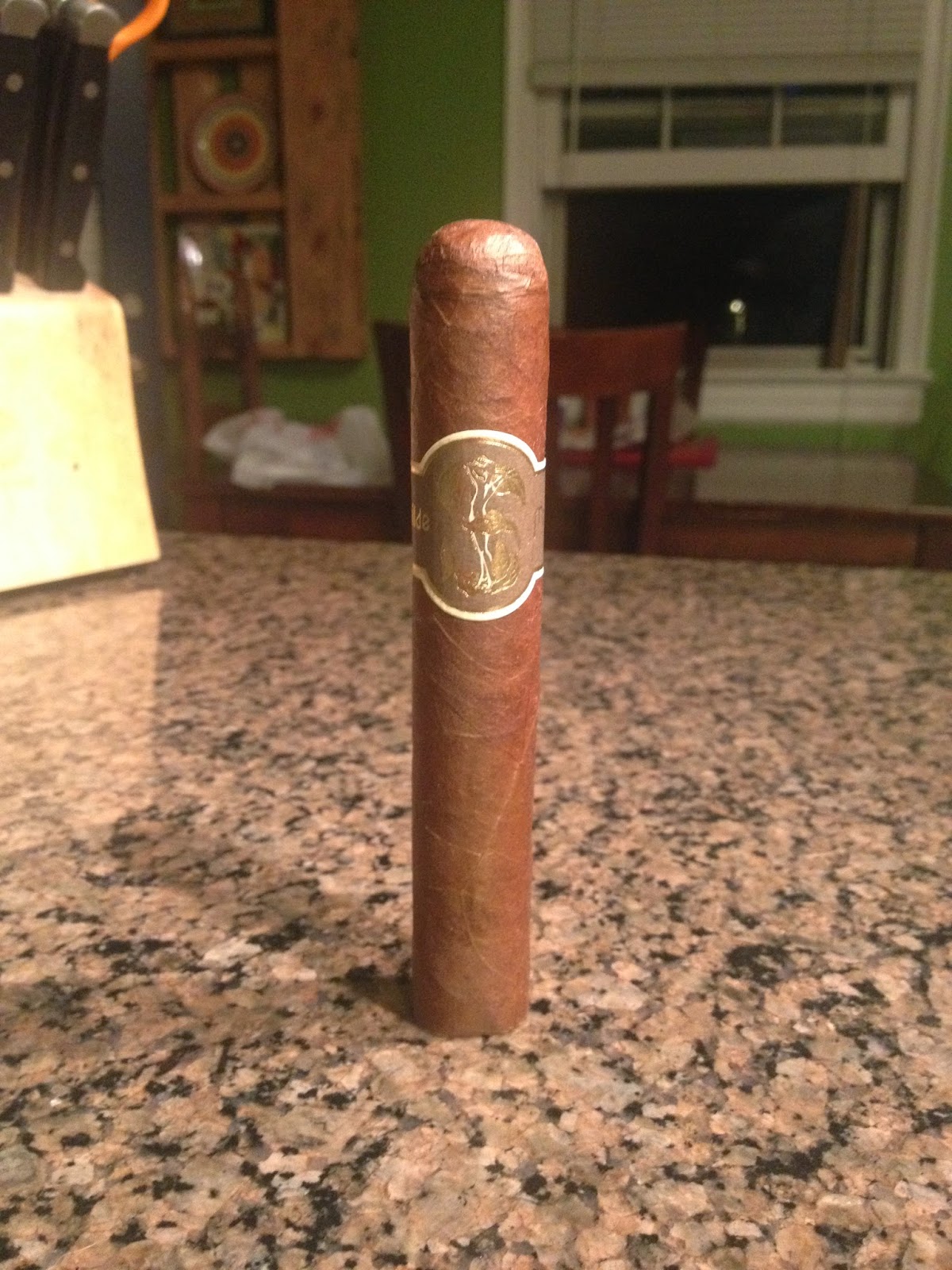 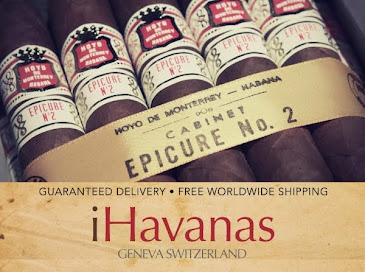