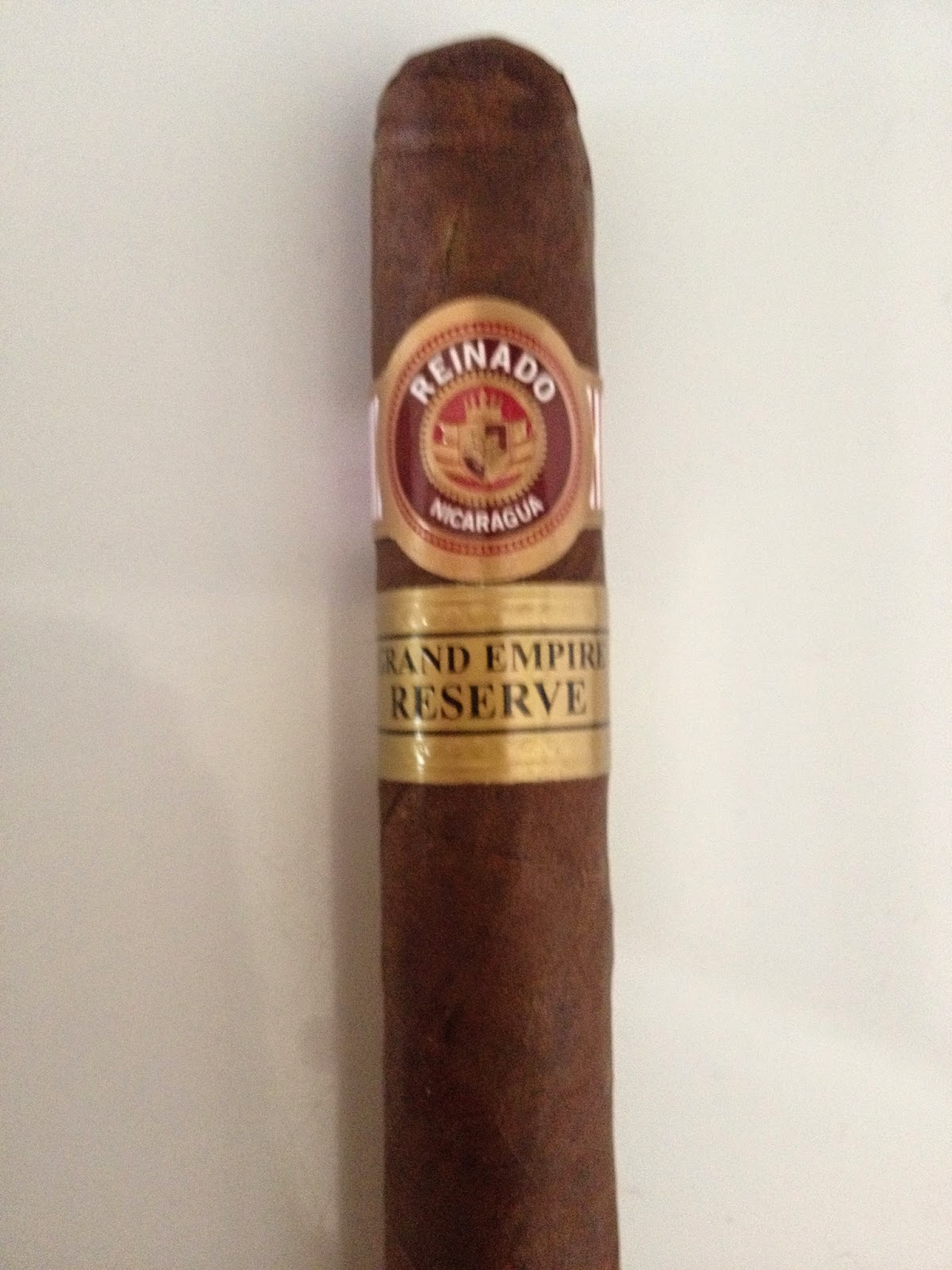 As I have said in the past, there is always going to be a company that will produce a line that speaks to an individual smoker. That line can do no wrong for the smoker and it becomes something very special. When you find that line you tend to have a lot of the cigars stocked in your humidor, and you have more than one size. There are a couple lines by manufacturers that this happened to me with, Epernay, Headley Grange, H. Upmann and of course the Reinado Grand Empire Reserve. Since I smoked my first Grand Empire Reserve I have fallen in love with the brand, and each and every vitola I have smoked has been incredible. From the Petit Lancero to the Gordo, the line has done no wrong to me. That is why today I complete my review of the entire line, and finish it with the Corona Gorda.

The Corona Gorda is one of the newer vitolas in the line and a great addition. It possesses the second smallest ring gauge for the line and is a true corona gorda measuring 5 5/8" with a 46 ring gauge. Like the other smokes in the line, it is a Nicaraguan puro, and is composed of aged tobacco that has undergone a unique and lengthy fermentation process that brings out the best qualities of the tobacco. Presentation as always is beautiful and I love the secondary gold band on the cigar and it just scream royalty in my opinion, perfect for the name. In some ways, the secondary band is very Cuban Romeo y Julieta. The cigar features an oily wrapper that has a beautiful Colorado Maduro coloring and you can feel the oils on your fingertips when you remove them from the cigar. There some minor veins throughout the smoke and it is finished with a lovely cap. The wrapper is smooth in texture and it has a soft give when squeezed. The aroma on the cigar is that of tobacco, rich earth, oak and cocoa and it is an aroma of a wonderful Nicaraguan puro. 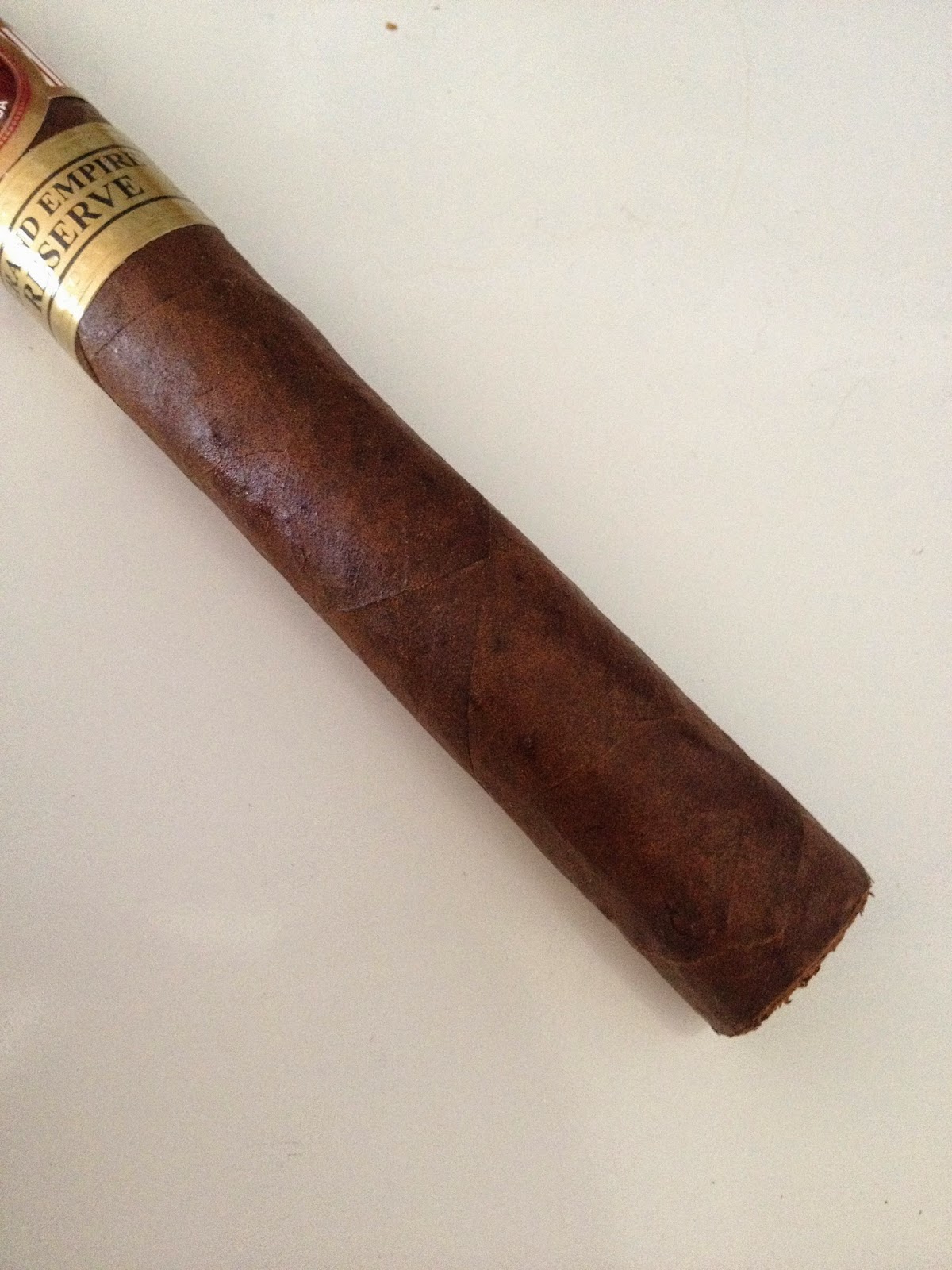 The corona gorda begins by showing some great Reinado notes and it delivers a unique Nicaraugan puro quality. I am picking up those nice chocolate cake flavors and it has some sugary syrup qualities with that. There are some wood and earthy notes present with that and it is a rich cigar is balanced at the same time. It has a nice finish with each puff and it is a finish that lingers, but not in an annoying way. I would say that the cigar is smoking at a medium level in terms of strength and body and it is a cigar that I could begin my day with and end my day with. Its the balance that the cigar possesses that make this so. In terms of construction I am getting a terrific draw that is cool and producing a lot of smoke. Along with that, the ash that the cigar is producing is holding on firmly to the end and it has a nice light gray coloring. This is definitely a Grand Empire Reserve smoke, and a smoke I would come back to again so far. 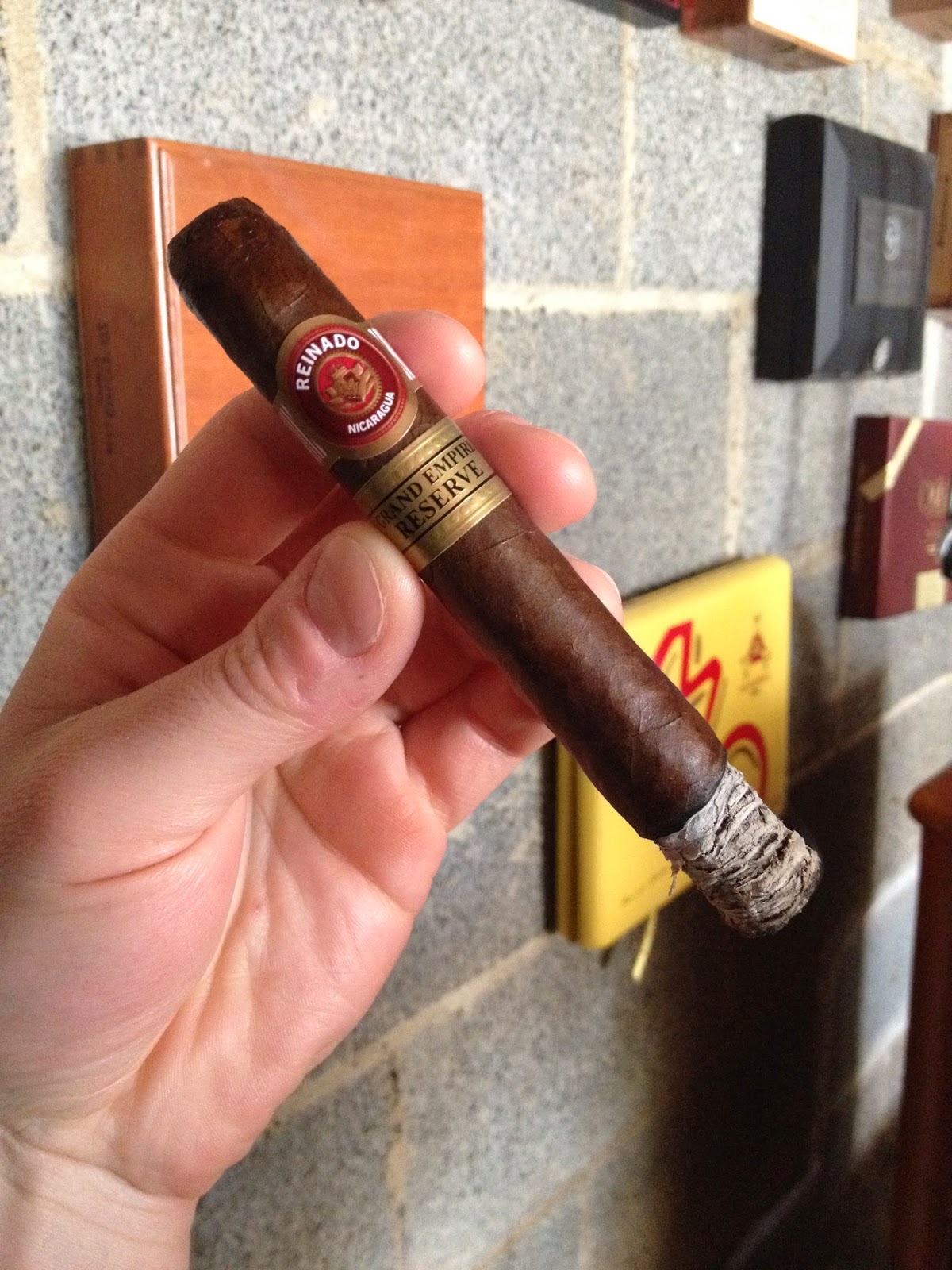 I am in the second third of the cigar now and it is in this third that it begins to show a flavor profile that I love so much with the Grand Empire Reserve line. There is this terrific maple syrup like flavor popping up with the cigar and it shows sweet and rich characteristics. I am getting some nice chocolate notes with that and it has a finish that shows some solid tobacco, wood and earthy notes. I would not say the cigar has changes in body and strength in this third, but it has definitely shown some transitioning in flavors and gotten more complex. It is still smoking at that solid medium level and with this third I would say it is a cigar that I would smoke in the evening rather than the morning or afternoon. In terms of construction the cigar is still top notch and it is showing that razor sharp burn line with a lovely light gray ash holding on firmly to the end. 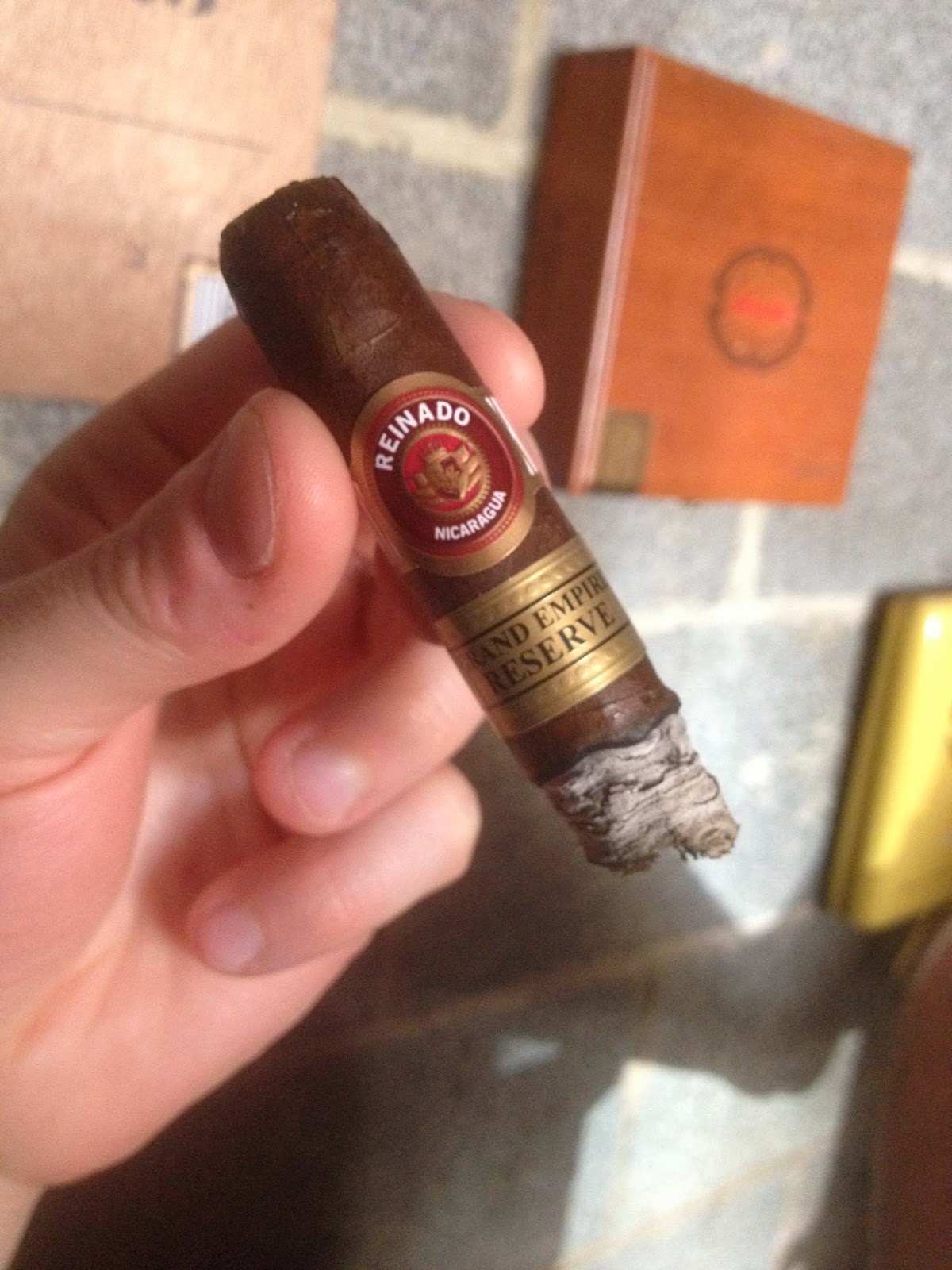 When I get into the final third of the cigar I find that it is growing a little more and you could not ask for a cigar to finish any better than this. I am getting some great chocolate and maple syrup notes and it is almost like chocolaty pancakes covered in quality syrup. Those tobacco, wood and earthy flavors are present as well and it is a rich cigar that is still very balanced and enjoyable at so many hours of the day. There are times when I think this is just an evening cigar, but then I smoke it in the afternoon and think this is terrific right now as well! The construction remains perfect from beginning to end and it is a cigar that produces a razor sharp burn line with a lovely gray ash that holds on firmly to the end. It has a cool draw from beginning to end and the final draw on this cigar is remarkable. The final third shows a medium full body and strength level and you could not ask for a better finish to a cigar. 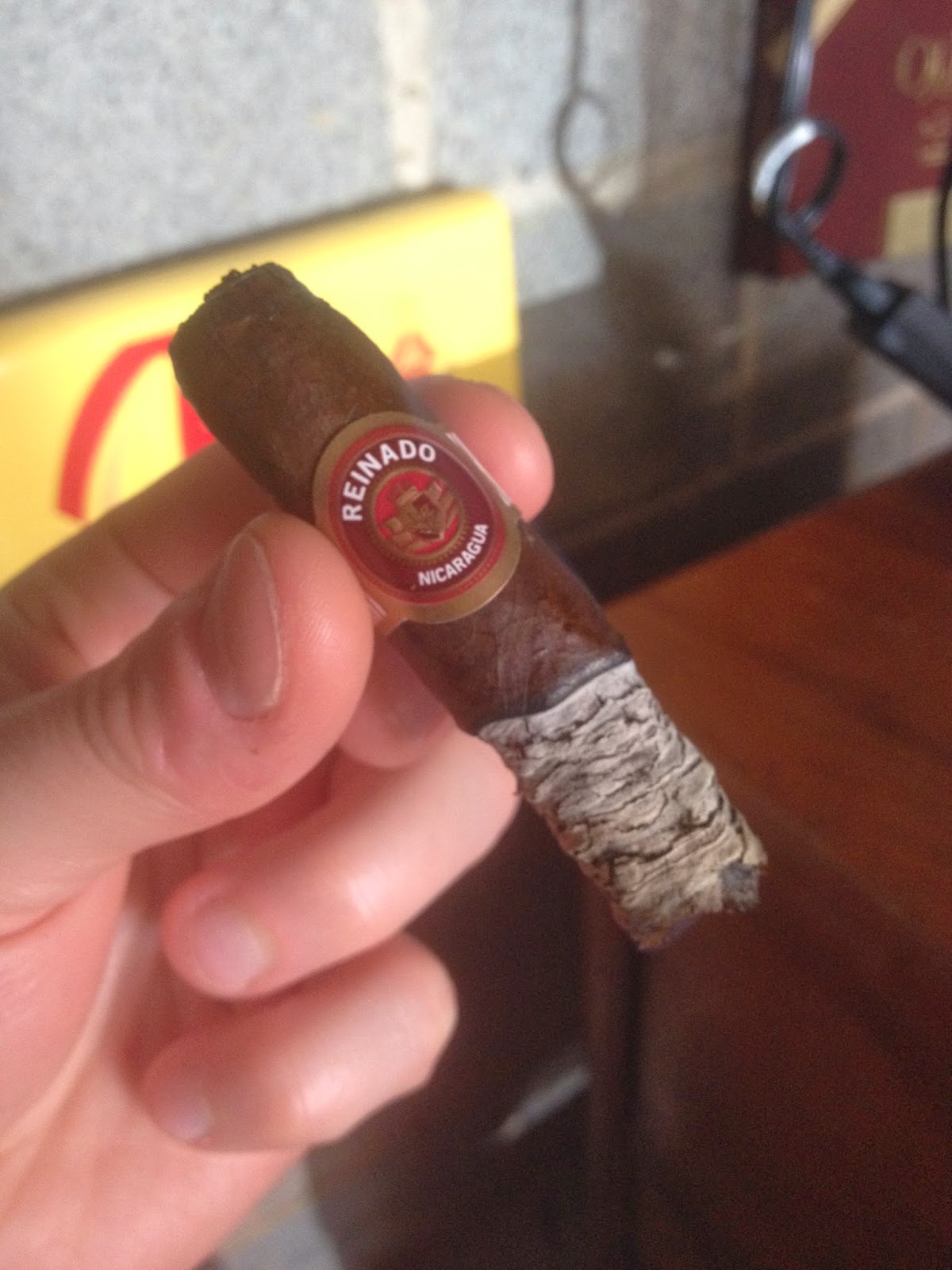 From the original robusto extra to the new vitolas, ranging gordo to the petit lancero, this line shines in all lengths and ring gauges. The construction is always top notch and with that is a flavor profile that is heavenly. I don't smoke nearly enough of these and I think my reasoning behind that is that I do not want to get bored with them. I don't think it is possible to get bored with these cigars, but there is something special about them when you smoke them less often. I love the corona gorda size to begin with and this cigar is a great example of how terrific the size can be. It is not as good as the petit lancero, that cigar is simply amazing, but this is a classic release that is flavorful and balanced.There is transitioning from beginning to end and it has depth and complexity. I am giving this cigar a solid 92 and I think this is a great smoke for anytime of day. Great job Antonio, great job! 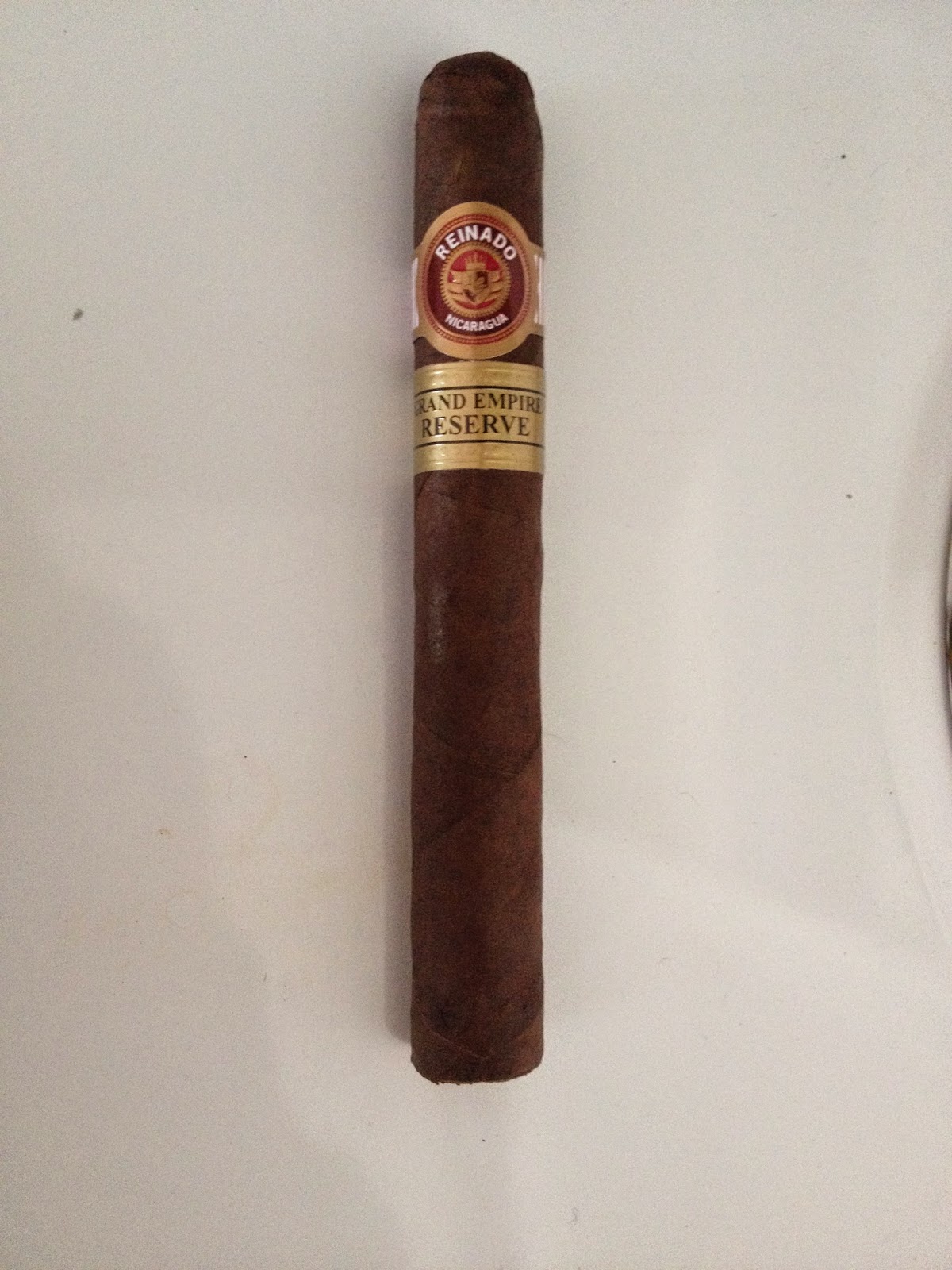 *cigars for this assessment were provided to me by Reinado Cigars