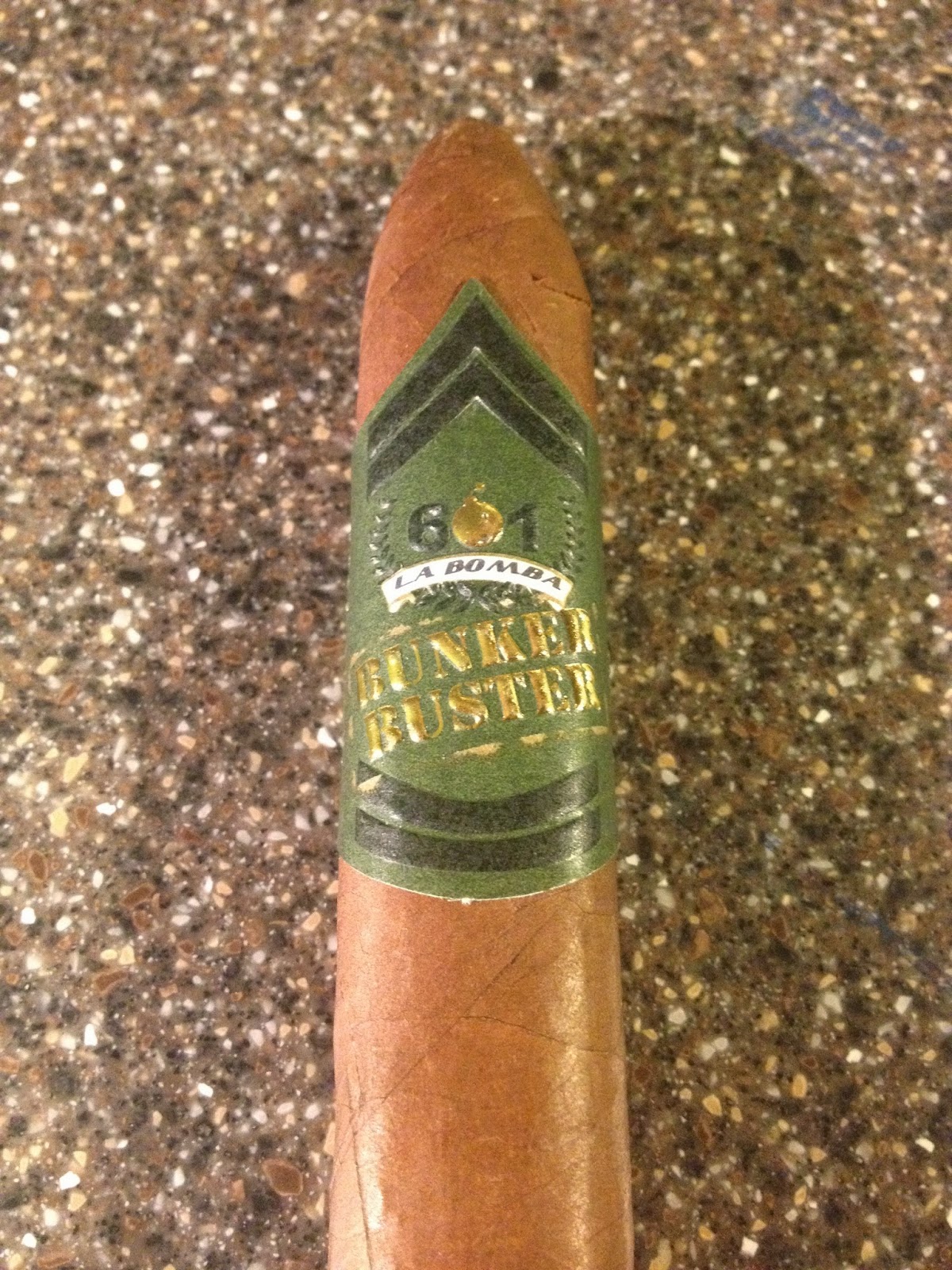 So the Bunker Buster is really more than just a bomb. Yes, it is a bomb, but it is laser guided and is massive as hell. The Bunker Busters we use today are GBU-28s, and they are over 19 feet in length and weigh close 5,000 pounds. We have been using these babies since 1991 and we began using them in Iraq. Since then we have used them all over the place and we share these suckers with Israel and South Korea. The number of videos you can see of these babies in action is pretty incredible, and the photos of the aftermath are just as impressive. They can penetrate roughly 5 meters of concrete and roughly 30 meters of soil/rock. With this and the BLU-82/Daisy Cutter, we have an arsenal that is capable of killing everything above and below ground. Enough of that though, let's look at the 601 La Bomba Bunker Buster and see how deep it penetrates. (that's what she said?)


The perfecto features a beautiful wrapper that is oily and smooth to touch. There are some veins present here and there and the cap is placed perfectly on the end. It is pressed wonderfully as well and this is a gorgeous cigar. The band has a nice twist on the insignia of NCOs, and it is technically a Corporal First Class. The perfecto measures 5.5" with a 56 ring gauge and is being made at La Zona in Esteli, Nicaragua. Production is limited to 5,000 cigars and they will be available in ten count boxes. The cigar features a Nicaraguan Habano Claro wrapper and underneath that is a blend of Nicaraguan leaves. The binder is Nicaraguan Criollo and this particular binder is very strong. The aroma of the cigar is that of wood, leather and spices, and I am getting an aroma of tobacco, pepper and other spices on the foot. 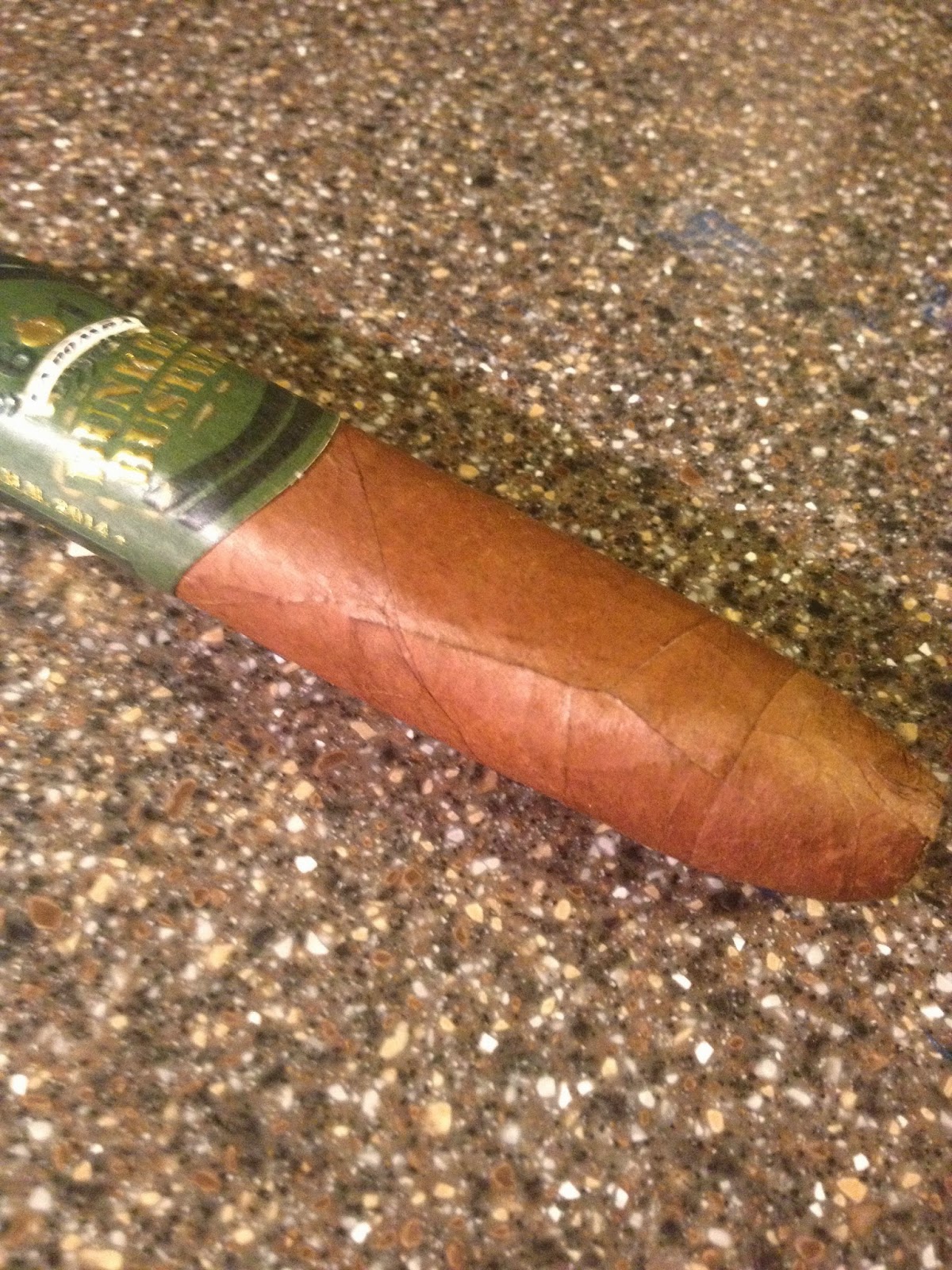 The first third opens up by showing a lot of pepper and spice notes. For a second I thought I was in trouble, but then it calmed down some and began to show the wonderful and balanced qualities of the tobacco. It opens up by showing some lovely spice notes and with that are some notes of leather and wood. The woody notes are mostly oaky and it is a filling cigar. It is fairly dry, not very rich, and I like that in my Nicaraguan puros. In terms of body and strength, this cigar is easily full in both categories and I would say it is just as full as the other La Bombas. There is some elegance though with that, and the flavors are never lost in the strength. Looking at the construction the figurado is smoking wonderfully and it is producing a solid charcoal ash with a nice light gray coloring. The burn line is fairly even as well and the draw is cool while producing a lot of smoke. 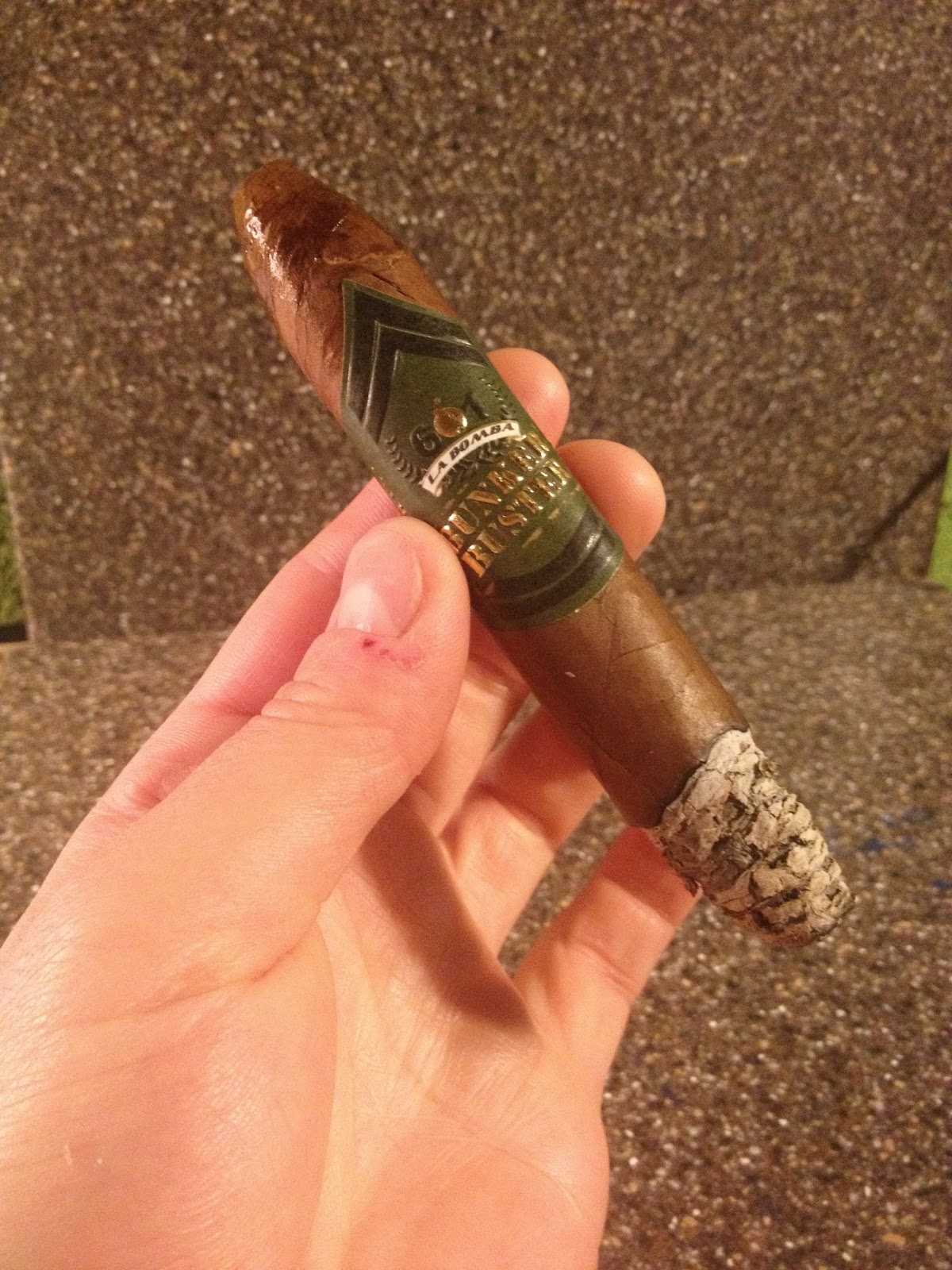 I am in the second third of the cigar now and I am finding the strength level to be dialed back some. It is still a full strength cigar,but it is a little easier in terms of smoking level. The body is still very full as well and this is a cigar that is made for the modern day smoker. It shows the qualities of strong Nicaraguan tobacco and I think it is safe to say that there is Esteli Ligero in this blend. The cigar continues to show some dryer flavors in this third and it is focuses on oak, leather and tobacco notes. There are some spices and pepper qualities as well, and it is showing some soft coffee notes on the finish. When I think of strong Nicaraguan puros, this is what comes to mind. These dark and dryer flavors that are accompanied by some serious strength. The construction remains similar in this third and it is showing a burn line that is fairly even and producing a solid charcoal ash that is holding on the end firmly. The draw on the cigar is cool and with it is a nice bit of smoke being produced. 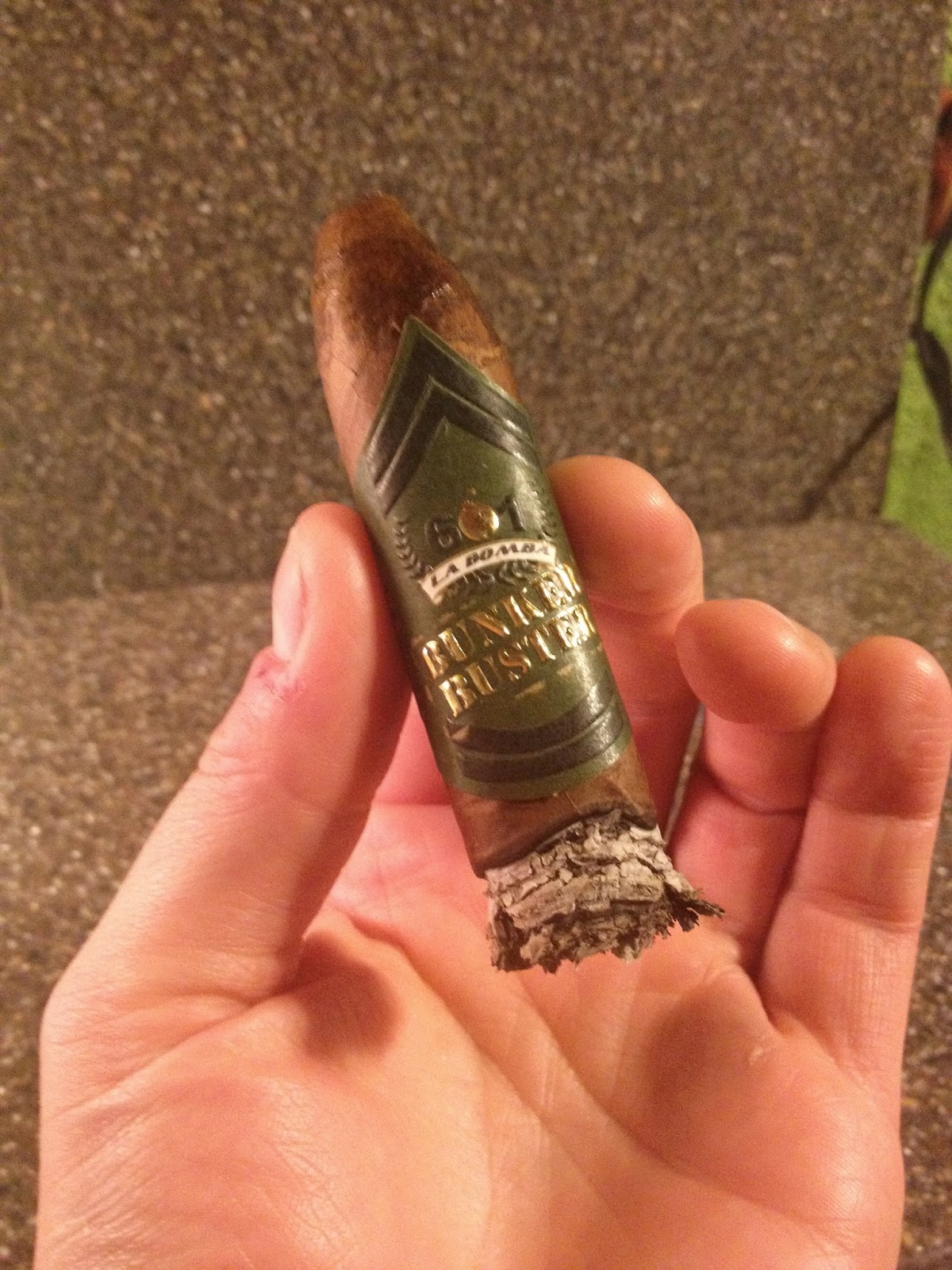 When I get into the final third I find that the flavor profile being produced is fairly similar to that of the second third and it is a strong cigar, but very balanced. The flavors are still focusing around the leather, oak and tobacco notes from before, but I am seeing some rise in coffee flavors with some cinnamon flavors come and go as well. I am a strong believer that cigars have a certain time in which they are meant to be smoked. There are cigars that are meant to be morning cigars and there are cigars that are meant to be evening cigars. This is an evening cigar, hands down. Along with that, I believe that cigars are meant for seasons as well. I would not smoke this in the winter time, it does not have that winter vibe, but I believe it is a summer cigar. The flavors delivered correspond with summer evenings in my opinion and this cigar is meant to be smoked now. In terms of construction the cigar continues to show those fairly even burn line and with that are a solid charcoal ash on the end. The final draw is cool and showing those dry and strong flavors.

I liked the Bunker Buster and the size it was offered in. I think perfectos are always fun smokes and when rolled correctly you can see the flavors from the wrapper and filler tobacco take the spotlight at least once. This is not the strongest 601 La Bomba I have had, but it still has some strength so don't think it is a soft cigar because of what I said. It has been many years since I was smoking full body and full strength cigars non-stop and I can tell you that to be a good one you need to have some strong flavors and be balanced. This cigar does possess those qualities and that is the reason this cigar is more than just a strong cigar. The samples that were given to me did seem a little young, but not by much and I think that in a couple months they will be where they need to be. Overall the construction was solid, flavors were nice and the overall it was very enjoyable. I am giving this cigar a solid 89 rating. 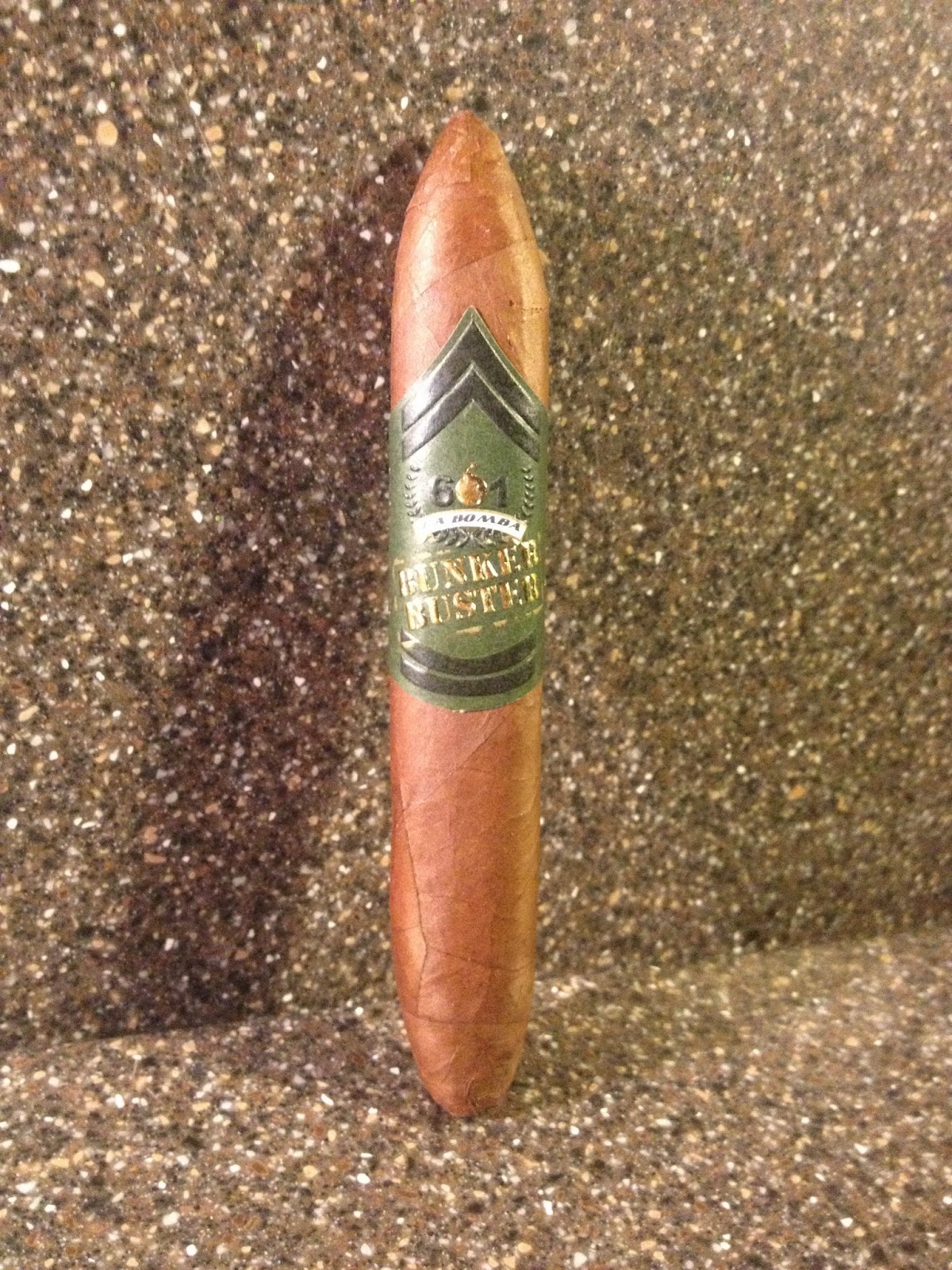