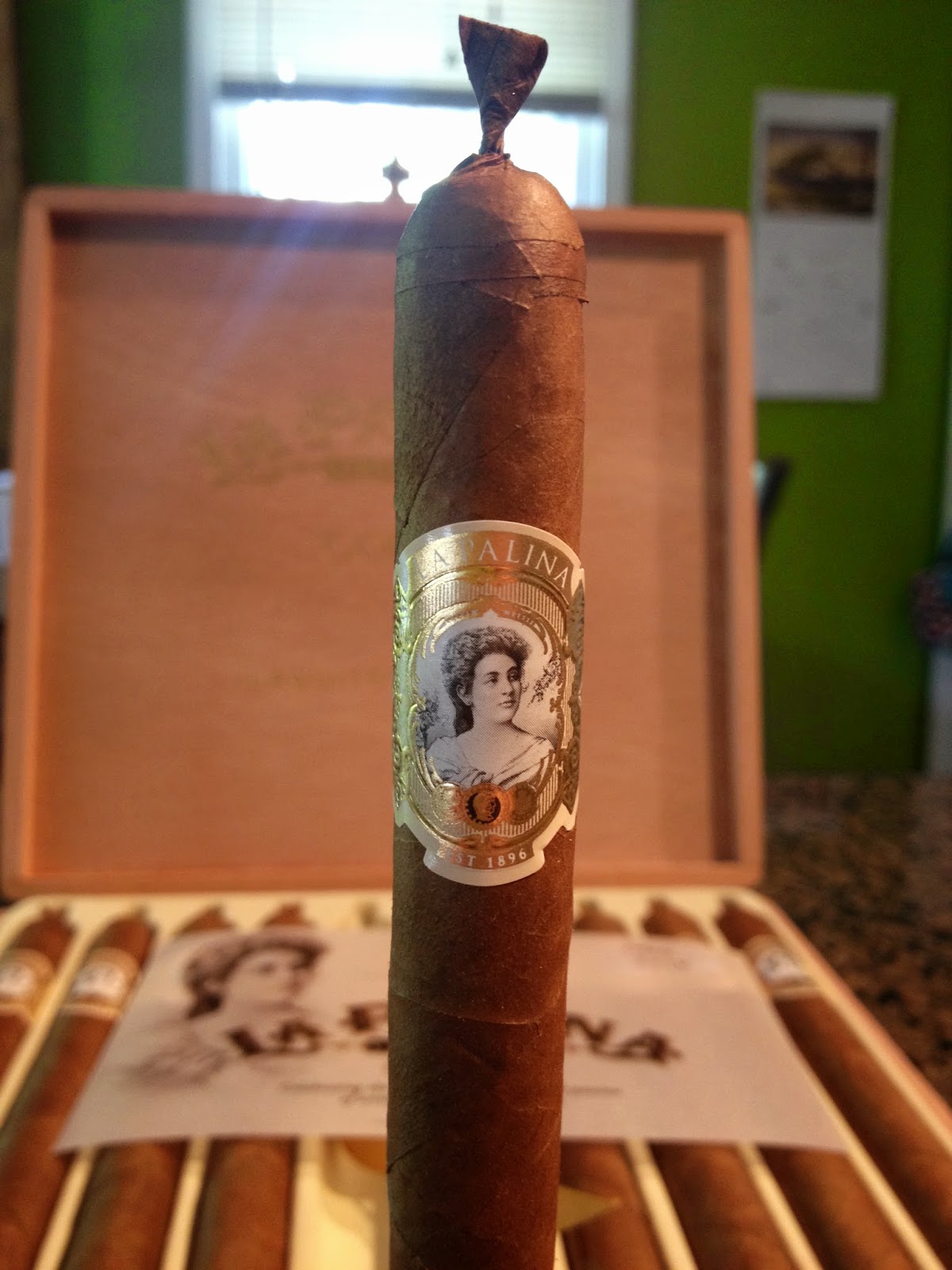 When you look at some classic bands of cigars, cigars from the 19th and early 20th Century, you often see portraits of women on them. The name of the cigar is often referring to the name of the woman on the band, but the reason for her being on the band is not known to us these days. Yes, hard research could be done to determine why she is there, but for the most part it will be hard to determine. The same goes for the name most of the time. Bill Paley has resurrected that tradition with his Goldie Collection, but unlike cigars from the past, we know where the name comes from and why she is on the band. Goldie was the name of the wife of Samuel Paley, and for those of you who do not know who Samuel Paley is, he is Bill's grandfather and the individual who started La Palina in 1896. In 2012 Bill Paley introduced the Goldies in honor of Goldie Drell  Paley and to this day the annual production that is limited in nature has been a success. This year marks the third year and with that comes the Laguito Especial.

The Laguito Especial marks the third Goldie in the Collection and is the longest one to date. The lancero measures 7.6" with a 40 ring gauge, and like all other Goldies, it is rolled in Miami, Florida at El Titan de Bronze by Maria Sierra. The wrapper is Ecuadorian Habano and it has an Ecuadorian binder folllowed by Nicaraguan and Dominican tobacco in the filler. The cigar is completely Medio Tiempo tobacco, and these are the highest leaves on the plant. The cigar has that classic Goldie vibe and it adorned with the beautiful band and the great fan cap finish. The cigar is rolled perfectly and there are no soft spots whatsoever. The wrapper has a nice light Colorado coloring and it has some veins present throughout. In some ways it reminds me of a high quality wrapper applied to a Habanos, but it is prettier overall. The aroma of the foot is that of tobacco, cedar, hay, honey and soft spices, and the wrapper is showing some tobacco and cedar qualities. The cold draw is perfect and I am ready to light this cigar up. 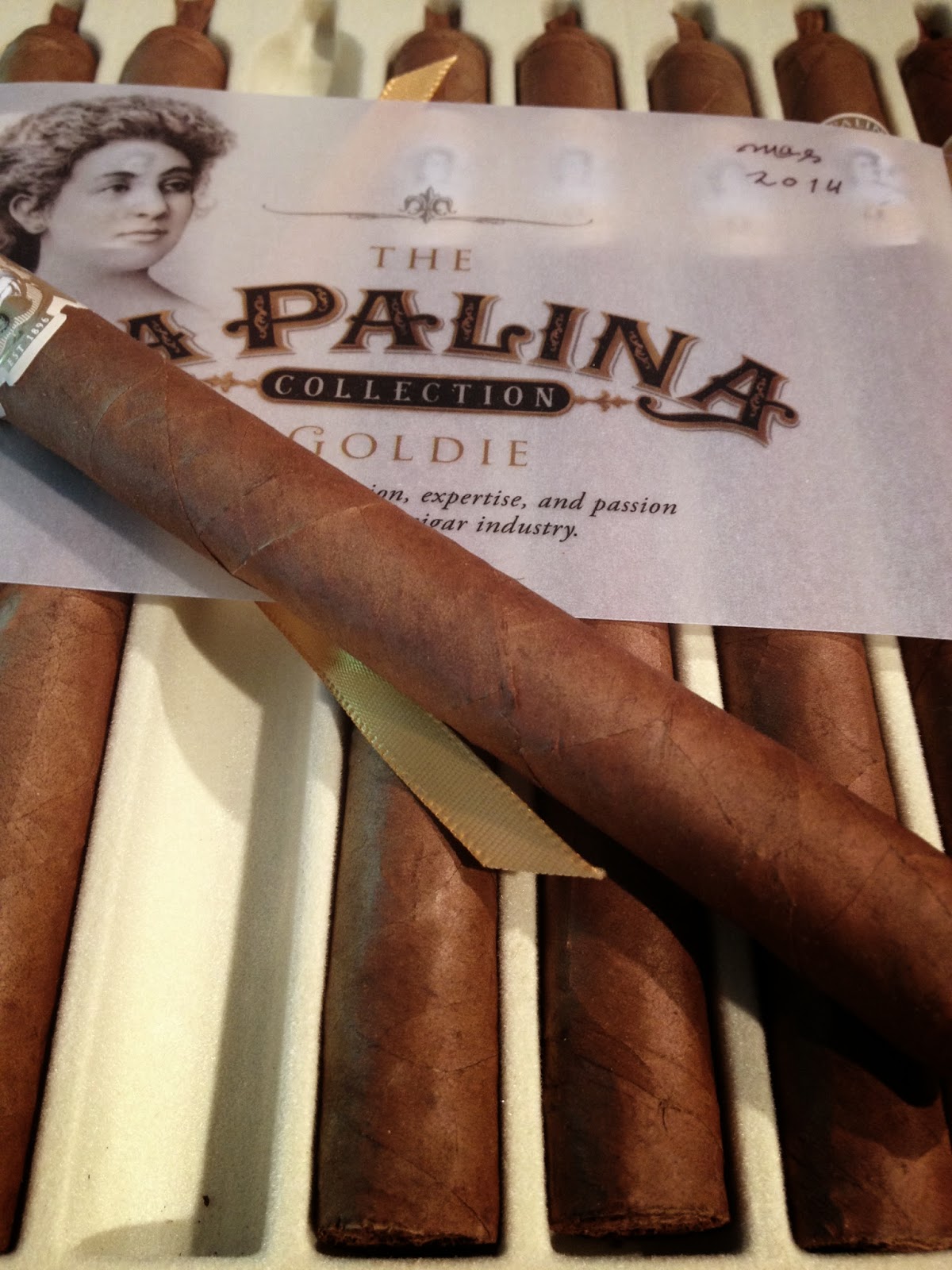 Lighting up the cigar I am greeted by these light flavors of cedar and cream. There are some very faint tea leaf and coffee bean notes, but it is mostly creamy and cedary. I am picking up some toasted walnut notes as well with the cigar and it is very smooth. There is this paper quality with the cigar as well, but it is very faint. Overall the flavor profile is very soft and it is a different offering than I have had with the Laguito No. 2 and No. 5, but it is still enjoyable. The draw on the cigar is top notch and it is producing a nice bit of concentrated smoke. The burn line is razor sharp on the end and it has a firm charcoal ash that is holding on well. It is a light ash so I am tapping it off, but I do not think it would hold on that well overall. Right now I would say the strength level is on the milder side of the equation and it is maybe between mild and medium. The body is at a medium level though and this is a nice afternoon smoke.

When I get into the second third of the cigar I find that the cigar continues to deliver those cedar and cream flavors, but it is accompanied by a very soft lemon curd flavor. The citrus and lemon notes are soft, but they have that citrus quality while producing some sweet qualities as well. I am getting faint nutty notes on the finish and it has a soft floral and tea finish. Overall the second third is a big improvement to the first third and it really begins to open up now. There is a nice bit of depth now and the transitioning from the first to the second third is key. It continues to smoke on the milder side of things and I would say that the strength is still between mild and medium with a medium body. The construction is still top notch, and it has a smooth draw that is producing a nice bit of smoke and a burn line that is razor sharp. The ash is that same charcoal coloring and the second third continues to produce the high quality attributes that were present in the first third. 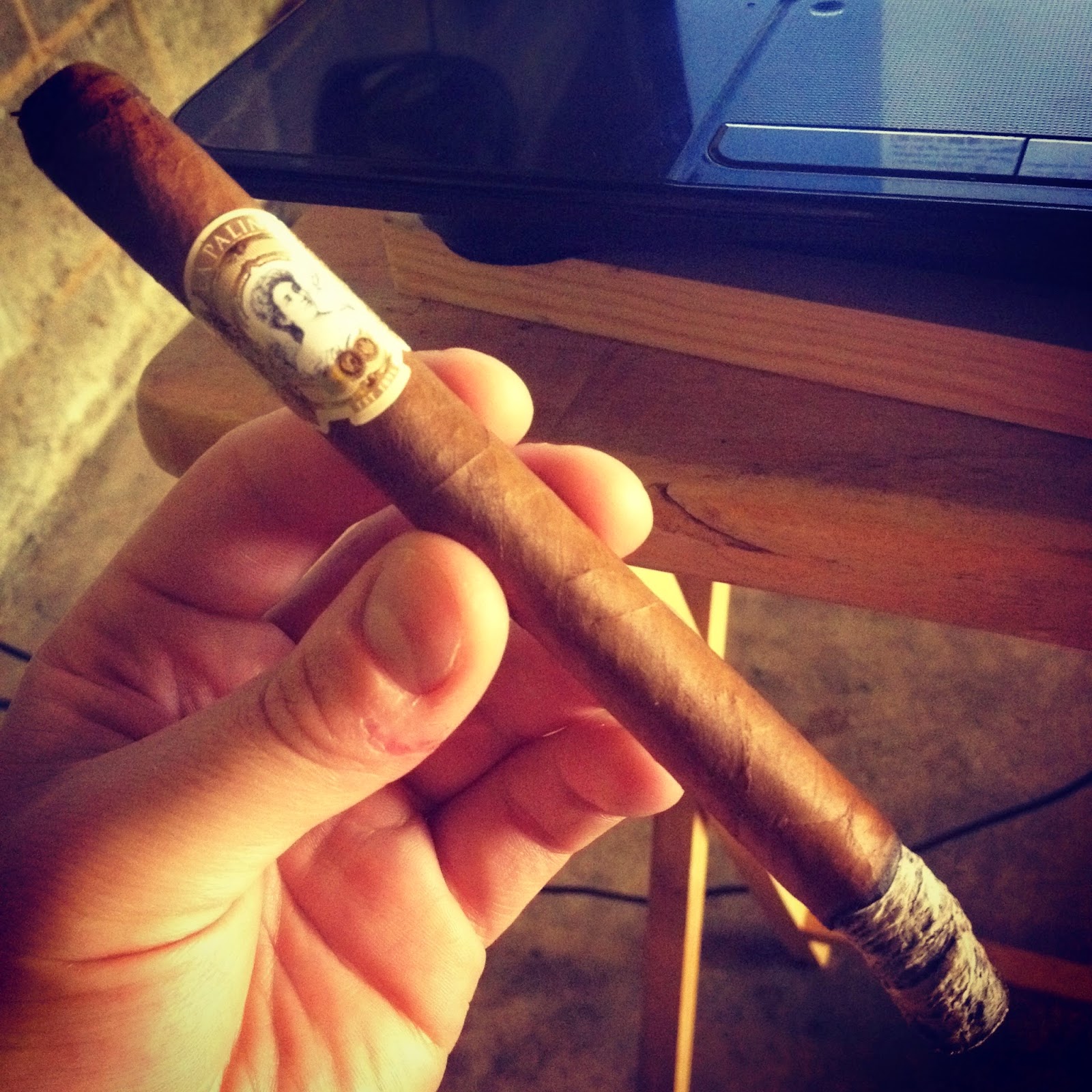 I am in the final third of the cigar now and I am finding the sweet lemon curd flavors have departed and I am left with a cedary and peppery smoke. The emergence of black pepper notes in this third is a little bit of a surprise, and it is pairing wit the cedar notes from before making for a dry and spicy finish. I am getting very faint notes of cream and it has some toasted nuts on the finish. I would not say the cigar has made a complete 180, but it is a nice turn, that is for sure. The construction remains perfect in the final third and it is producing that razor sharp burn line on the end of the cigar. The ash is that solid charcoal coloring and it is not going anywhere. The draw is cool to the nub and the smoke being produced is plentiful but concentrated. I would say that the strength has reached a more medium quality in this third and the body is remaining at that medium level from before. A different finish to the cigar than I was expecting, but still enjoyable. 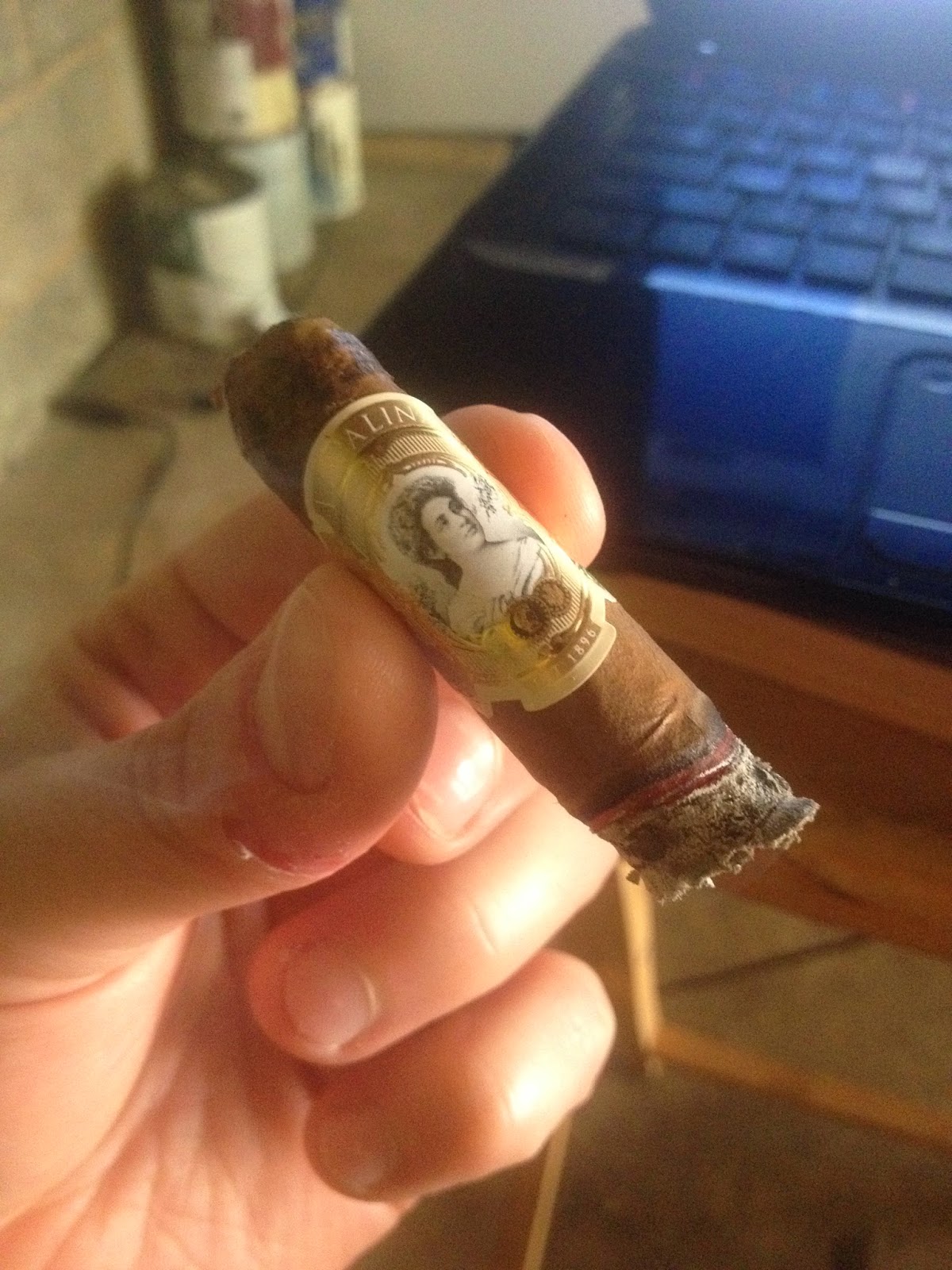 The Laguito Especial is a great offering from La Palina and a nice addition to the La Palina Goldie Collection. However, I do not believe it lives up to the No. 2 or even the No. 5. I love the size that the cigar comes in, but I don't think it delivers those great flavors that were present in the first two releases. I have smoked three of these since I got them and found that they are fairly consistent in the flavors being offered and how they smoke. I think they are still a little young, but I believe these will age well and in six months will be even better than they are now. I went back and smoked a No. 5 this week and found that those were aging wonderfully as well but they had just a little bit more than this. I know it seems like I am killing the cigar, but in reality it is a good cigar that La Palina should be proud of. I have been hearing mixed comments on the cigar from individuals I know and I am still interested in opinions of some others that I know haven't smoked or released their thoughts. Either way, the cigar produced some lovely flavors, showed terrific construction and was rolled wonderfully. This is a cigar that I would recommend you pick up and enjoy, and if you are like me I would pick up a box to tuck away. I am giving this cigar a solid 90 rating. It is not my favorite Goldie, but it is still a good cigar. 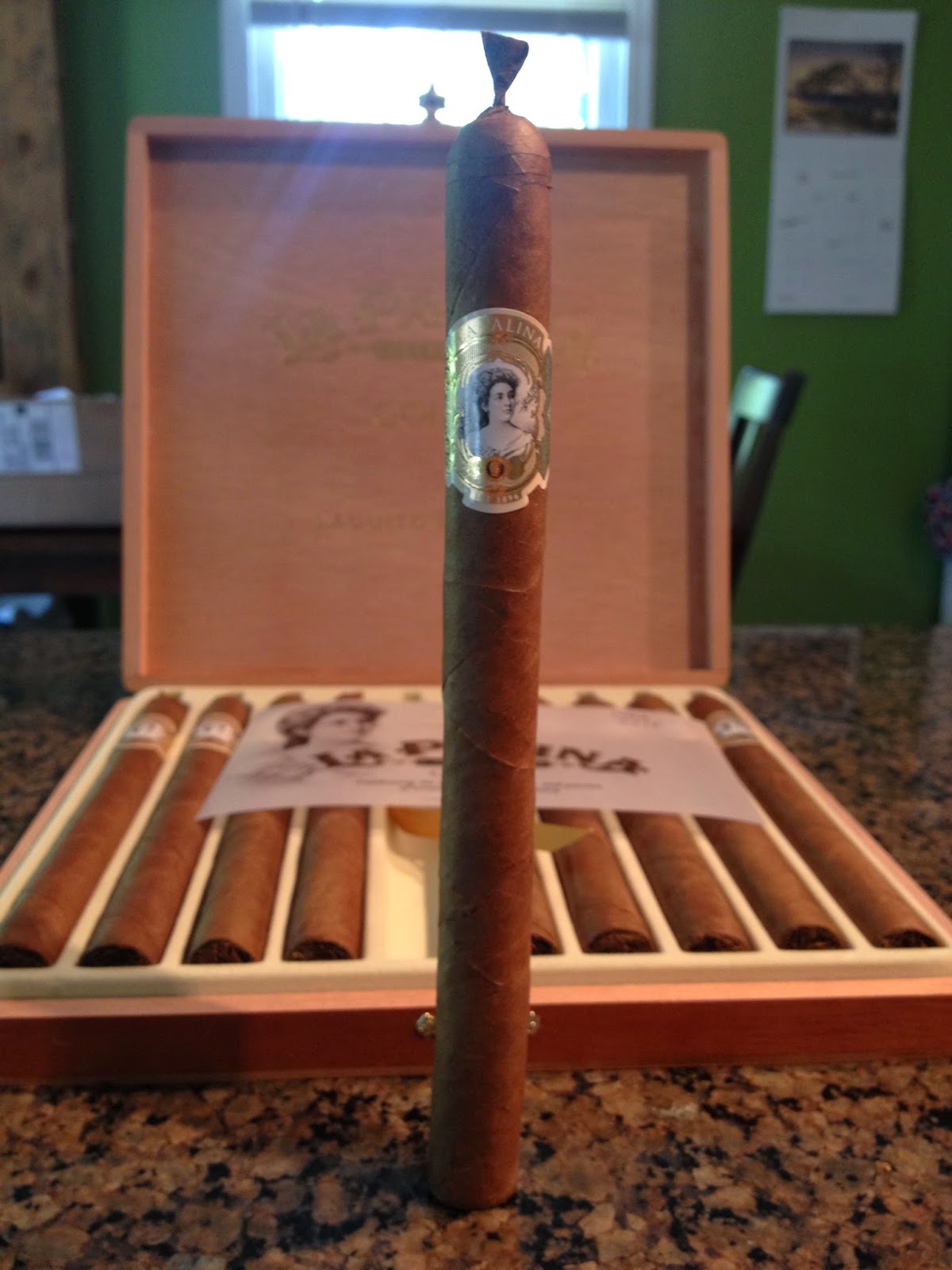