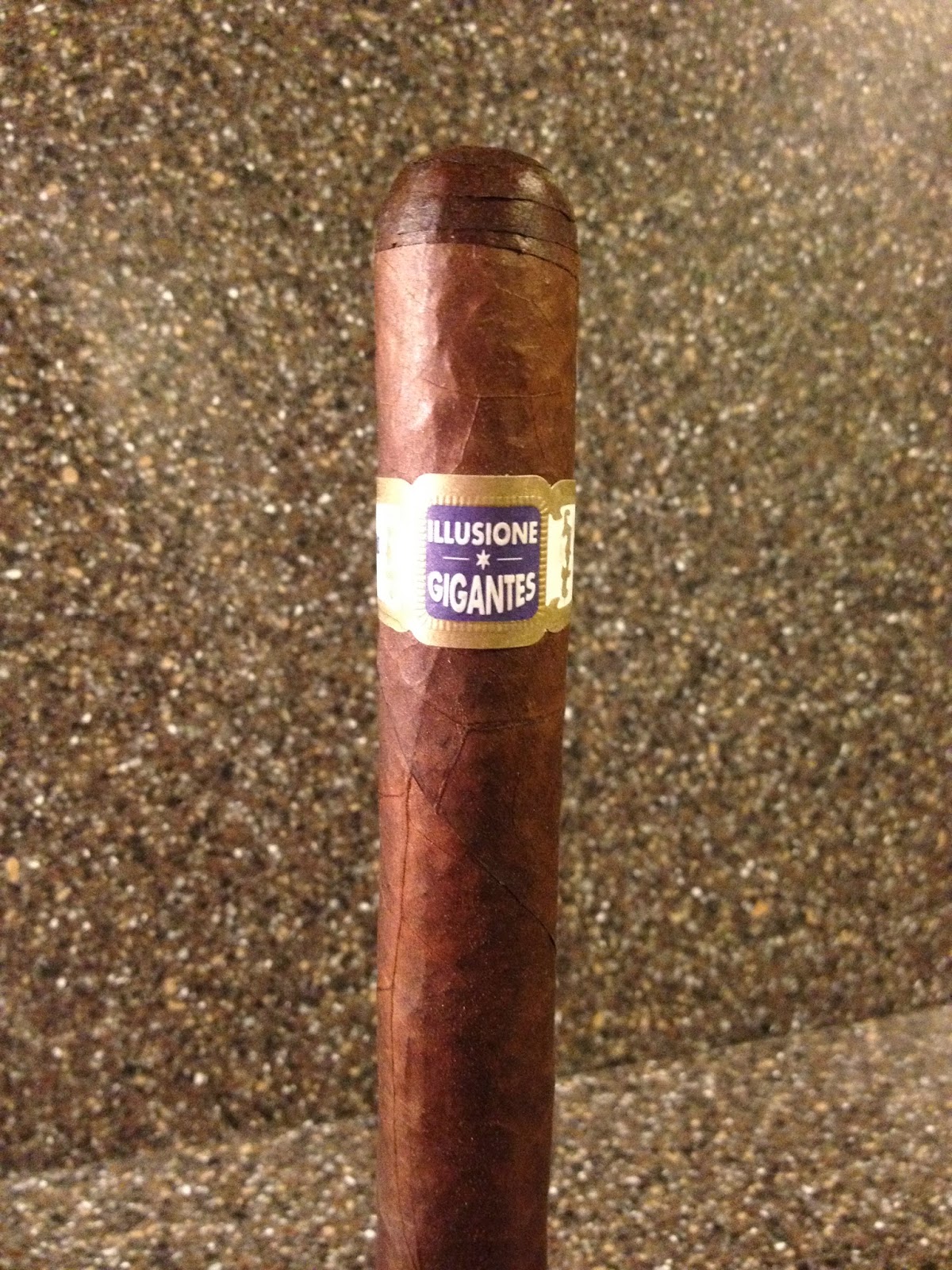 Last month, Illusione announced the release of their new cigar, Illusione *G* Gigantes. The cigar can be seen as a follow up release to the successful Illusione *R* Rothchildes by many, and that is due to the packaging and blend information revealed. The band looks nearly identical to the Rothchildes, though the coloring and actual cigar name are different on the band, and the box packaging uses that Gothic/Blackletter font that Illusione is known for. The cigar comes in 50 count cabinets like the Rothchildes and is packaged in a wheel like the Rothchildes are as well. While pricing per cigar is now double what he Rothchildes is, the cigar is much larger and the pricing is very reasonable for the size. The *G* is one of the largest cigars to be released by Illusione, and while others released with a 56 ring gauge are pressed, this release is round. Last year the Rotchildes ranked No. 12 in my Top 25 Cigars of 2013, so let us see how the new *G* Gigantes compares.

The *G* Gigantes is the fourth cigar to be released this year and while the others were line extensions, event exclusives and retailer exclusive cigars, this will be a regular production and nationally released cigar. The cigar measures 6 1/2" with a 56 ring gauge, and like all recent production from Illusione, the cigar is made at TABSA in Esteli, Nicaragua. The wrapper featured on the cigar is Mexican San Andres from A. Turrent S.A. and is completed with Nicaraguan tobacco as the binder leaves and the filler blend. The tobacco being used is AGANORSA tobacco and is Corojo '99 and Criollo '98. Dion has also onfirmed that tobacco is being used from the two growing areas of Esteli and Jalapa. 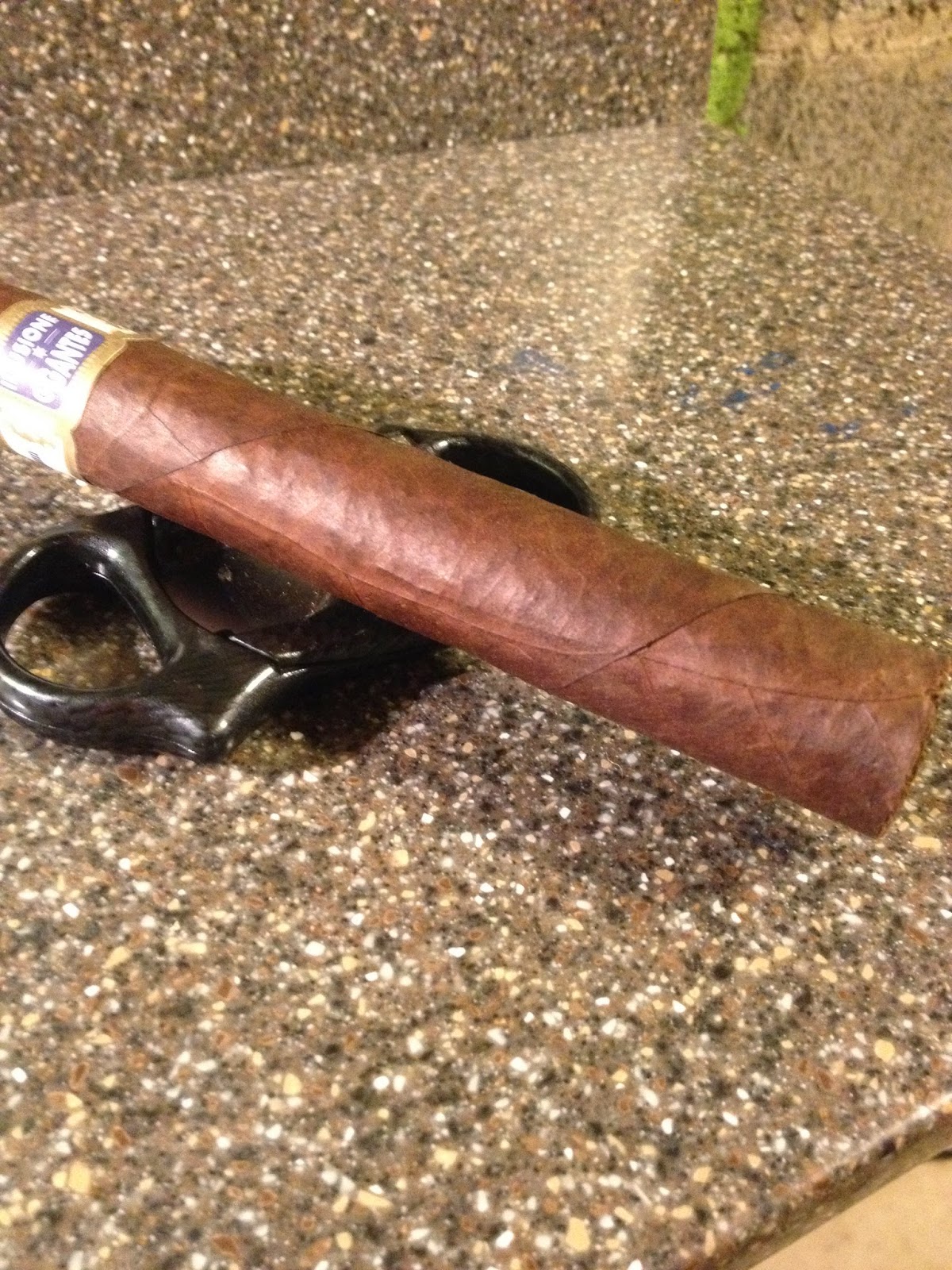 In terms of the blend, Dion has informed Seth's Humidor that the *G* Gigantes is a different blend than the *R* Rothchildes, and that "it is a little deeper, especially in the back half. There is a bit more ligero being used in the blend." The cigar features a lovely triple cap and the wrapper has a lovely maduro coloring. There are some veins throughout and there is a thick oily, almost syrupy texture to the wrapper. I am getting some sweet aromas off the wrapper and they are aromas of chocolate, tobacco, leather, rich earth and Asian spices. There is an aroma of cocoa, coffee and stone fruit on the foot and it is beautiful all around. The cold draw is perfect, allowing in a great amount of air, and it is showing those rich earthy flavors with each draw. 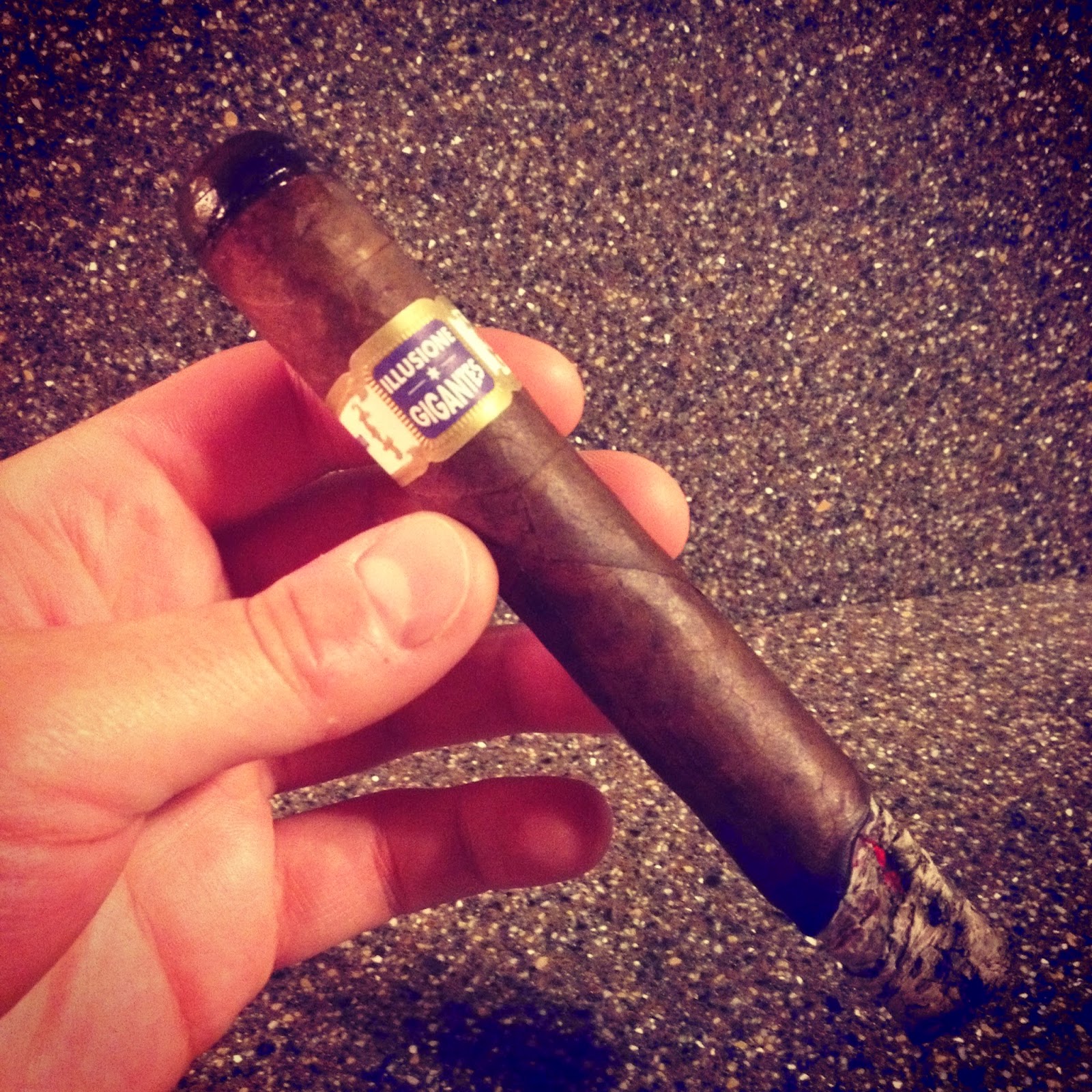 Lighting up the cigar it begins by showing some terrific pepper notes and it has that nice Nicaraguan peppery spice to the cigar. I am getting some definite rich earth and cocoa notes from the Mexican wrapper as well, and the complexity is created with the tobacco to produce some lovely floral, toasty and soft mint notes. It is a flavorful cigar and a great large and Mexican San Andres one at that. I am not the biggest fan of Mexican San Andres to begin with, but Dion does a great job with it. The construction is solid throughout the first third and it is producing a fairly even burn line with a large charcoal ash. the ash is holding on well but it is slightly flaky throughout. The draw is cool on the cigar and it is producing a nice bit of smoke with each puff. This is a massive cigar but it is smoking so well despite that. For a 56 ring gauge cigar, this is very flavorful and complex. The strength is around a medium level in my opinion and the body is right there as well. So far this is a great beginning and I look forward to the second third. 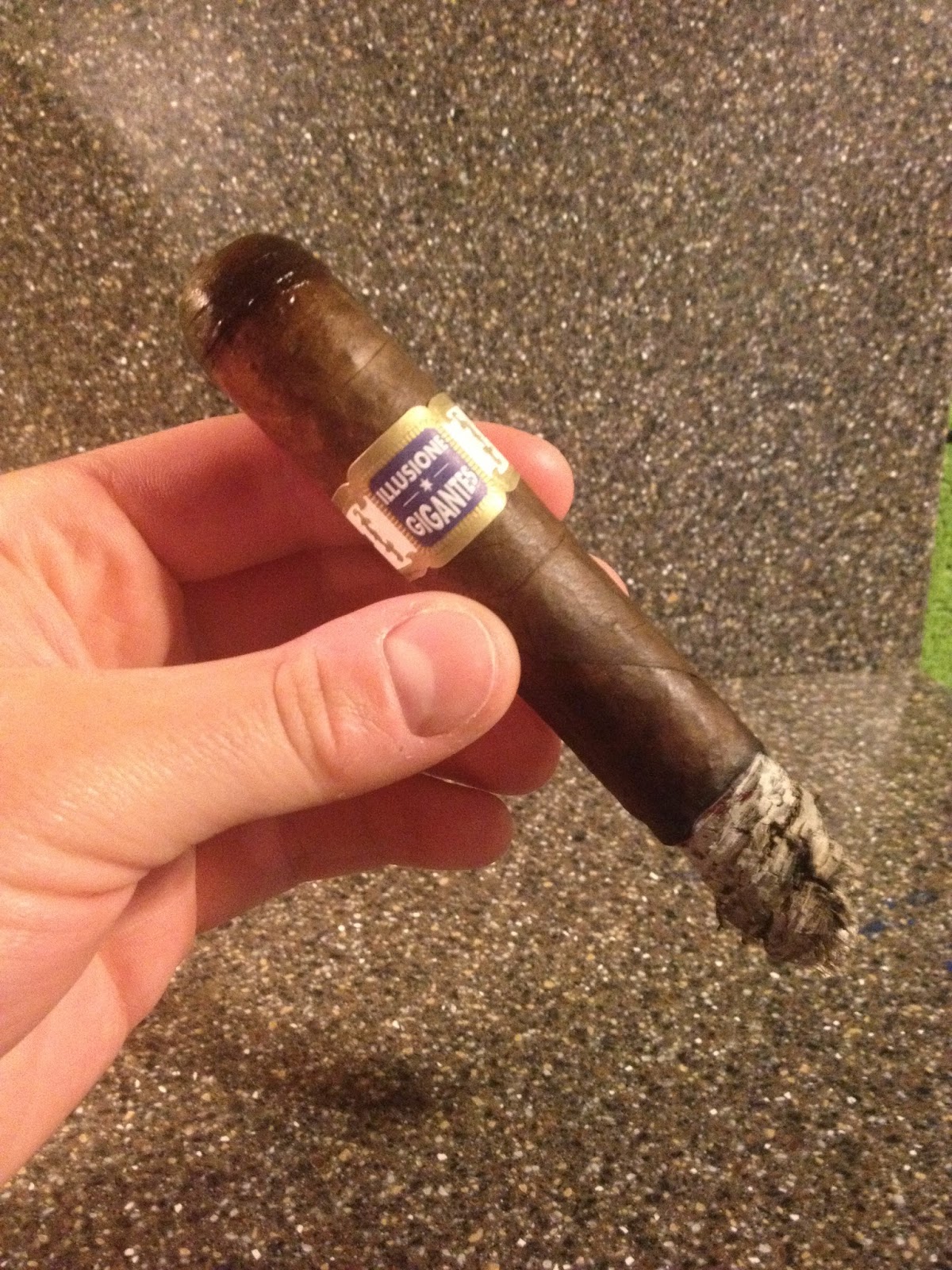 When I enter into the second third of the cigar I find that the flavor profile shows some nice transitioning and it is beginning to show some definite mineral notes with the cigar. They are balancing out those sweet cocoa and earthy notes from the first third, but they are still present and balancing. The spice notes have faded some but the strength is definitely picking up. I am not getting those floral and minty notes now, but it is more rustic and earthy. The cigar continues to burn well and show that nice burn line and with it is a solid charcoal ash that is slightly flaky on the end. It is a big cigar, there is no doubt about that, but it does not smoke like a large cigar. It feels large in hand but how it actually smokes is not like a 56 ring gauge. This cigar is rolled and blended wonderfully, and that is what makes this smoke so terrific. The strength is slightly above medium at the beginning of the third, close to medium full at the end, and the body is becoming stronger as well. 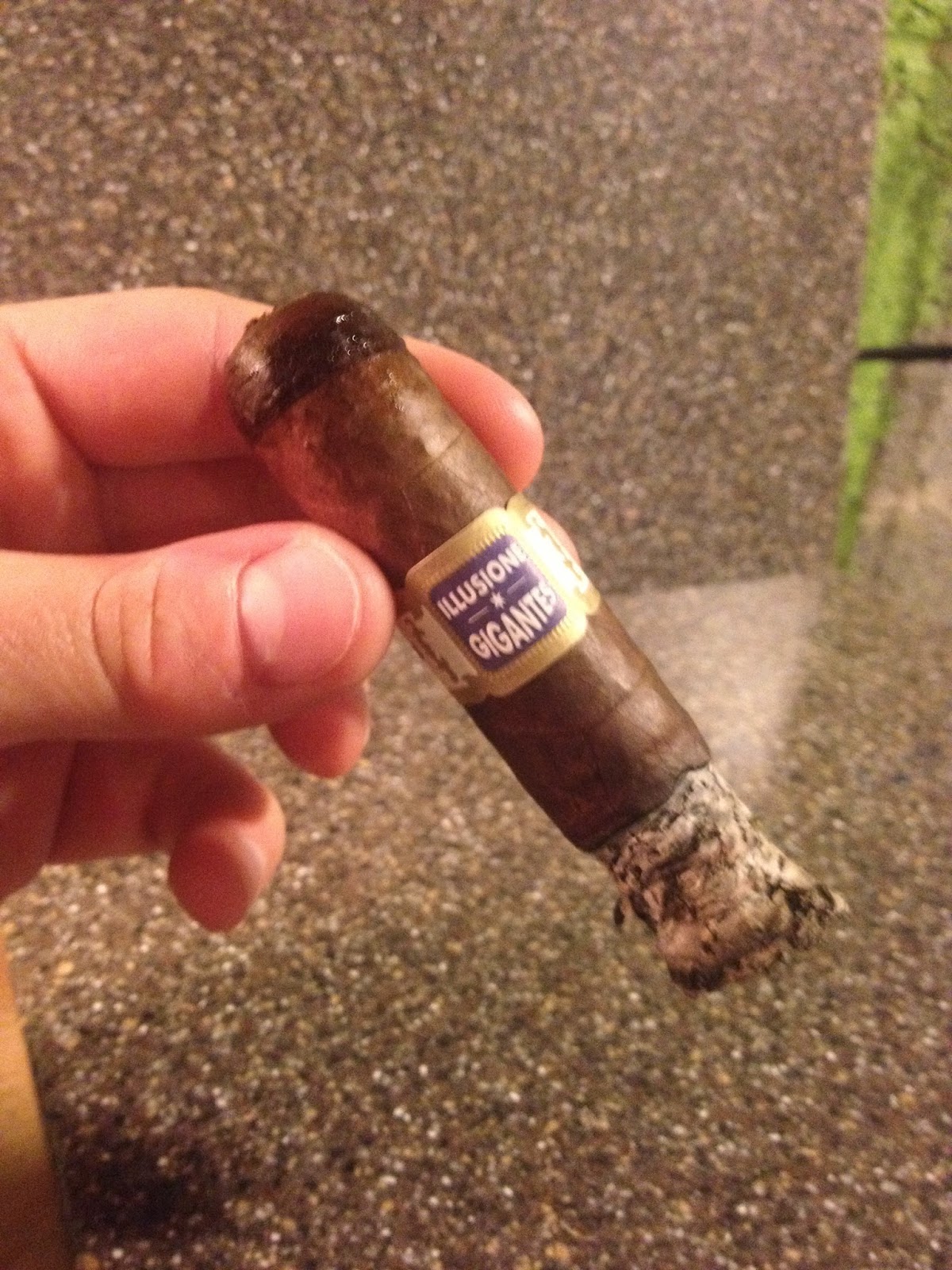 I am in the final third of the cigar now and as Dion had told me, the cigar finishes stronger than it begins. It is definitely smoking towards the fuller side of the spectrum and it has a body right at full with a strength level there as well. There are dark flavors of toast, oak and earth present, and it has a dark chocolate flavor that is bitter as well. I am getting those mineral notes from the second third as well and this is a cigar that has shown transitioning from the first third to final. I am getting some spice and strong tobacco notes with the cigar as well, but it is not showing those peppery flavors, more spicy tobacco qualities. Despite its strength and dark flavors, the cigar remains balanced in this third and it a well blended cigar. In terms of construction the cigar continues to perform wonderfully as well and it produces a cool draw to the end and that nice burn line. The ash is still slightly flaky, but it is producing that great charcoal coloring on the end. 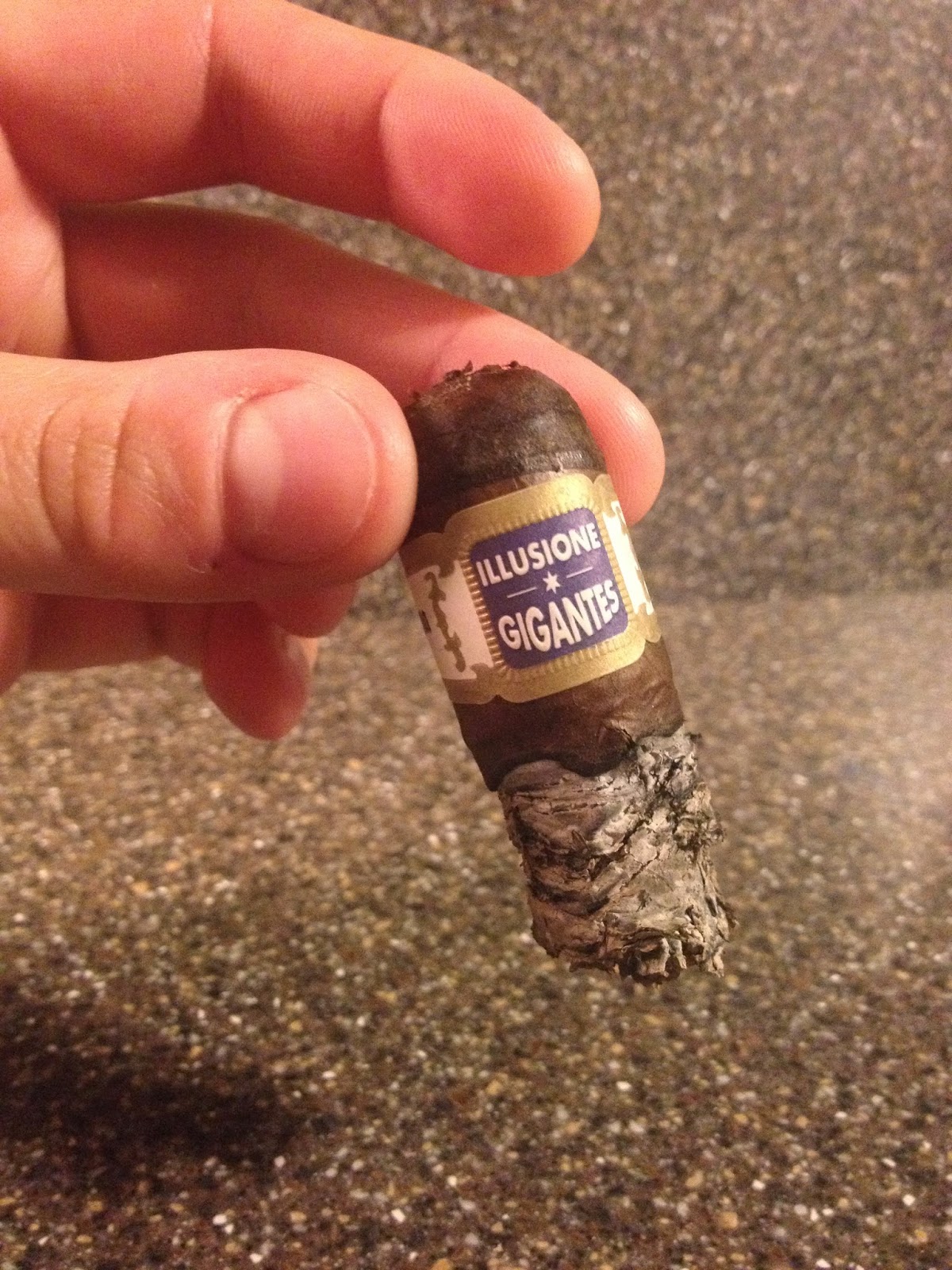 Dion was incredibly brilliant to make a cigar like the *G* that is similar to the*R*, but in a larger offering. I love that he blended a whole new cigar for this release, he didn't use the same blend, and he blended the cigar in the 56 ring gauge offering. This is a cigar that shows the wonderful qualities of Mexican San Andres tobacco when blended with quality AGANORSA tobacco from Nicaragua. Dion knows how to use San Andres tobacco and make a maduro to my liking. The large cigar smoked cool from beginning to end, showing great construction, and it did not smoke like a boring large ring gauge cigar. I can see smokers smoking through a ton of these and going back for more. While a lot of guys picked up boxes of the *R* because of how affordable it was, that might not be the case with this cigar because of the price. On the other hand, a lot of guys will be picking up five packs of these cigars with no problem. I purchased these cigars from site sponsor Smoke Inn, and Abe was brilliant to offer these in five packs, 20 packs and boxes of 50. They are still readily available, so don't hold back and get your hands on some quickly. I am giving this cigar a solid 92 rating and I will be smoking these when I want a big cigar that I can enjoy for a long period of time. 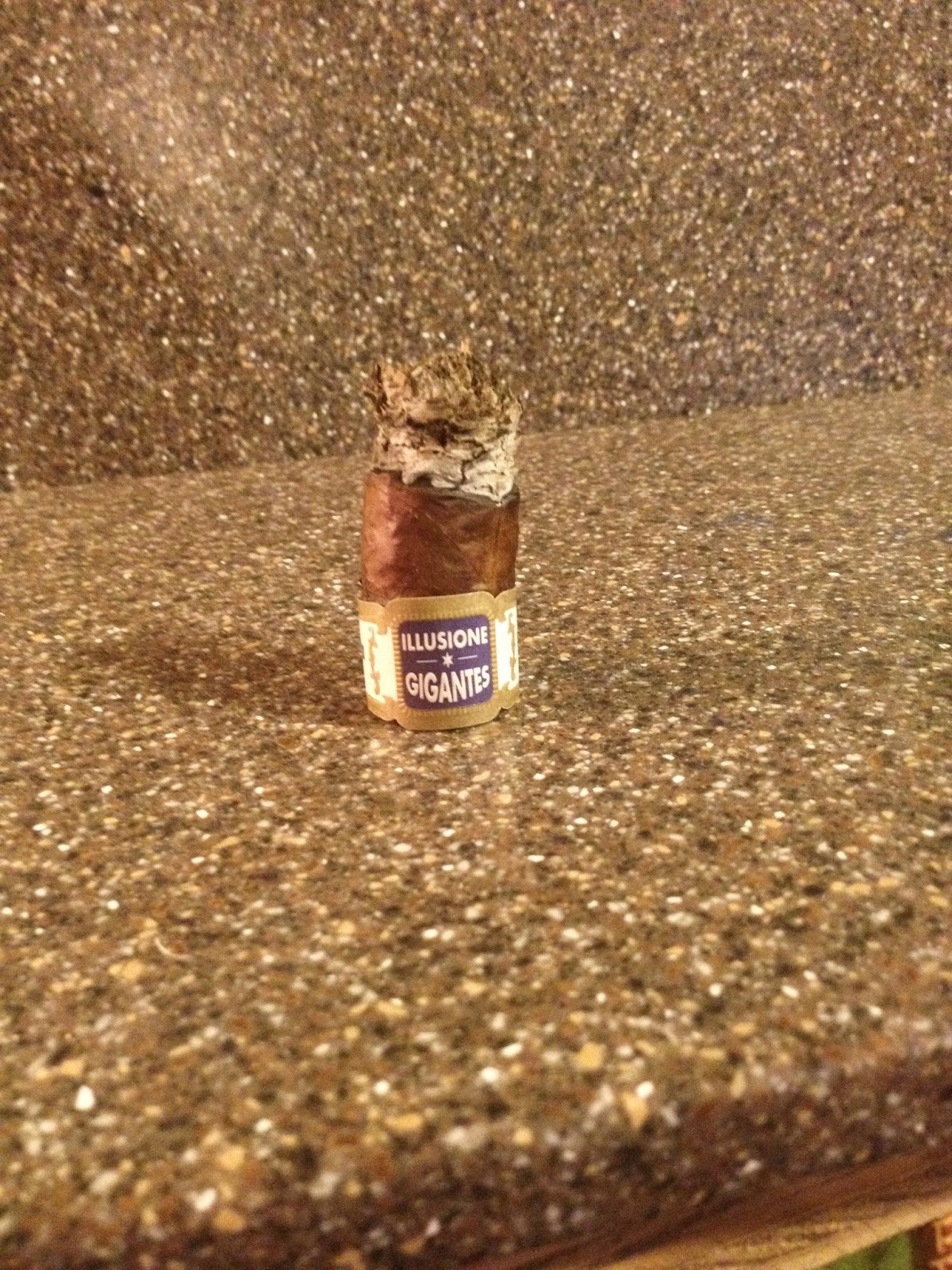 Note: I asked Dion if he named this cigar Gigantes after the Ramon Allones Gigantes, something he did with the 4/2G, but he informed me that that he named the cigar Gigantes because it was simply a big cigar! Thanks for your time by the way Dion! 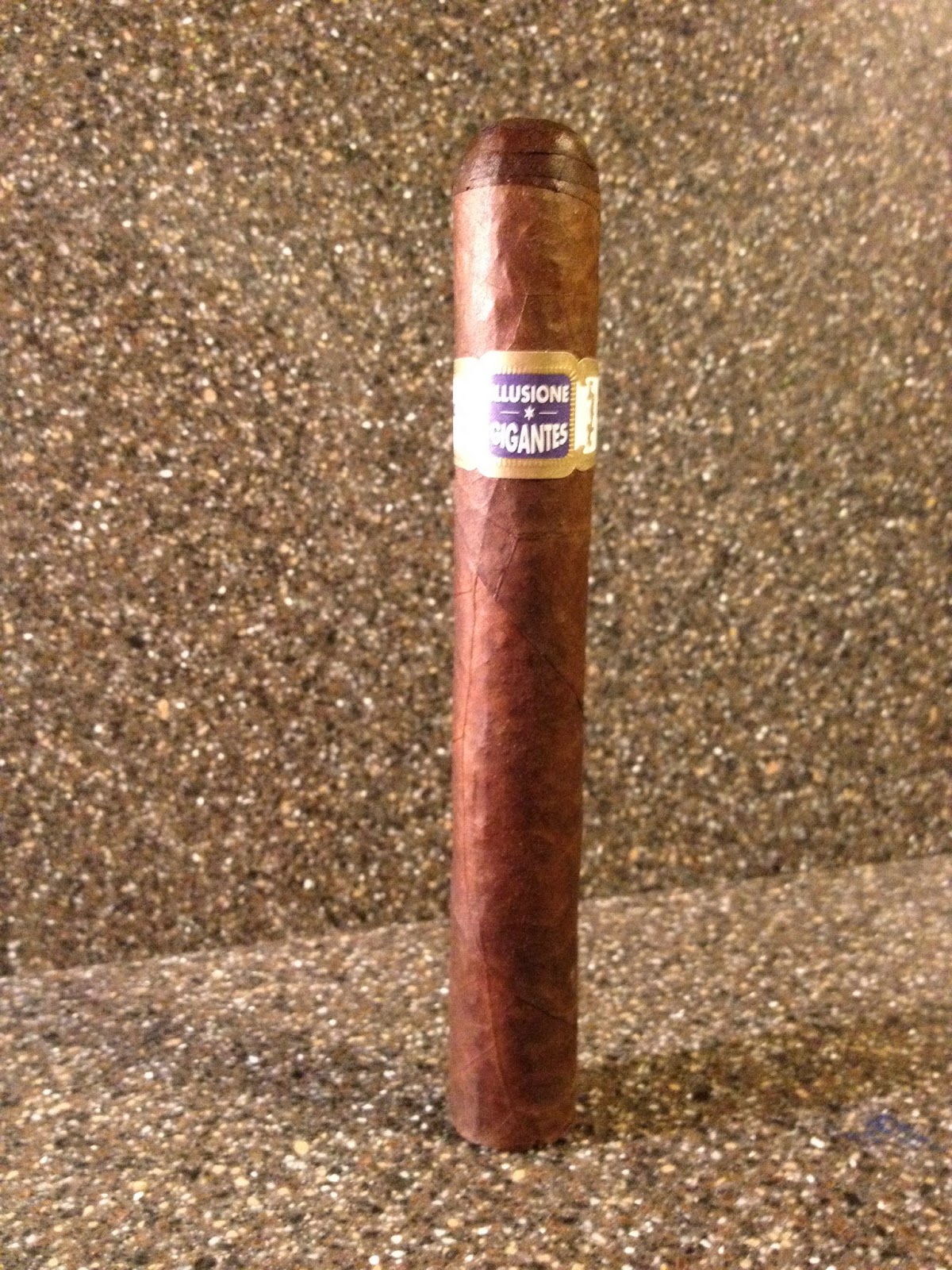