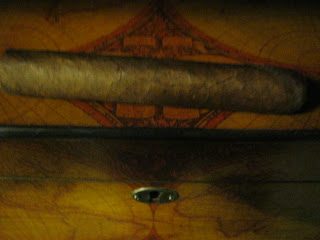 So every once in a while I like to have a cigar which I know nothing about. Today, I got my wife to pick a cigar out of one of my humidors, take the band off, and have me smoke that. Sounds like fun right? It is. The beauty about not knowing what you are smoking is that you pay much more attention to the flavor, and the whole time you are trying to guess the tobacco in it. The cigar she picked out was a robusto in vitola and had a beautiful dark brown wrapper. The wrapper was perfectly placed over the cigar with no stretch marks, and very little veins. At the top of the cigar I noticed the triple cap, which was placed exceptionally. Looking at the leaf and feeling it I had a pretty good idea that it was a habano wrapper, and was either a Criollo seed or Corojo. The cigar was rolled very well, and there were no soft spots on it at all. I am going to go out on a limb and saying this is not a Cuban, but I will be able to tell once I have smoked some of it. So I have just lit this cigar and right away I am getting tons of pepper, this is a beast. I am going to enjoy this smoke. I have burned my way down some and I am getting lots of pepper, earth, and on the end some coffee. This flavor profile does not narrow it down one bit. This is a habano wrapper, and I am going to say it is probably Ecuadorian or Nicaraguan. I am about half way through, and this cigar is burning very well, this is not a Cuban. I find that there is a distinct flavor with Cuban cigars, and looking at the burn line by the ash, it has been fermented very well which leads me to think this cigar was made in Honduras or Nicaragua. There is a lot of ligero in this cigar, and I am going to go with Nicaraguan and possibly Honduran tobacco.  Still smoking this baby, and the pepper is still strong and so is the earth, but I am also getting some nuts now with the coffee on the finish. I am going to go out on a limb and say that this is a habano wrapper from Jalapa, Nicaragua, and that there are fillers in here from Honduras and Nicaragua. The binder is probably from Nicaragua as well, but I am not sure. I just finished this smoke, and I am going to say it is a habano wrapper from Nicaragua, probably Jalapa, and Nicaraguan fillers. I don’t know how my guess is going to be with this, but I’m going to say it is either a Padilla Dominus, Padilla Miami, or an Illusione. I can safely say though that this cigar is made at the Fabrica de Tabacos Raices Cubanas in Honduras. It doesn’t have any Pepin characteristics in the smoke, and he is the only other non-Cuban manufacturer who used a triple cap. I am giving this cigar a 91, what a great smoke. I really want to know what it is now!

So Katie showed me the band, and it is a Alex Bradly Tempus robusto. I was pretty close with my guesses. The Tempus is covered with a habano wrapper, it is a Honduran Criollo ’98 from the Trojes region of Honduras. I guessed Jalapa, but there is a lot of Jalapa tobacco in it. I picked up the Jalapa flavor profile from the filler. There is also filler tobacco from Trojes, Honduras. The binder, I was way off. The binder is an Indonesian Embetunada and a Trojes Criollo ’98.

This was a ton of fun, and I look forward to more tests like this. I don’t know how close you could say I was, but I was on the right track with the wrapper and the Jalapa tobacco. Great smoke!