Before I begin this review and history of the Bolivar marque, I need to introduce you to terms that Cubans use, and non-Cuban manufacturers do not.

1) What we call a Cuban cigar, they call Habanos.

2) Cigar manufacturers usually have many lines within their production, just as any company does. Cheese It’s has Original, White Cheddar, Reduced-Fat, etc. What we call lines or brands they call marquis.

3) Now within a line you have different sizes of a cigar, some non-Cuban smokers refer to that as size’s but Cubans refer to that as vitola’s. Vitola’s change depending on the manufacturer but for the most part stay to the standard guidelines.

i.e. a robusto is a vitola/size and is mostly known to be 5″ in length and have a 50 ring gauge, that does not mean all are the same but for the most part all robustos are very similar. Some are 4 3/4″ and some are 5 1/2,” and some have ring gauges closer to 52, it all depends.

If that still does not make full sense let me know and I will get into more depth for you, now onto the main topic.

Simon Bolívar was one of the great historic figures of the 19th Century, who liberated much of South America from Spanish rule. The Bolívar marque was created in 1902 in honor of him, and it is not surprising that this Habanos is blended to match Simon Bolívar himself. Bolívar is among the strongest, most full bodied of all Habanos. It boasts an unrivalled richness of flavor and body, and is one of the most sought-after marquis among experienced Habanos smokers. 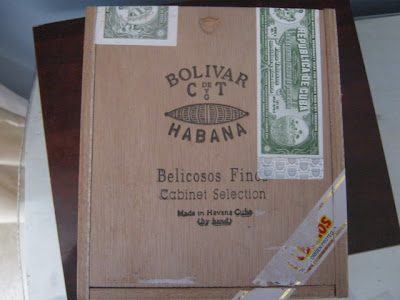 One of the most noteworthy vitolas in the Bolívar marque is the Belicoso Fino. It measures 5 1/2″ and has a ring gauge of 50. The cigar falls into the vitola of the belicoso because of it’s length and girth and has a tapered head. A tapered head basically means that it makes a point at the tip and doesn’t round out. In the picture above you see the top of the cabinet in which my cigar came in. As most Habanos boxes, they have lots of  warranty seals on them, and under black light you can see the seal of Cuba in the middle of them. 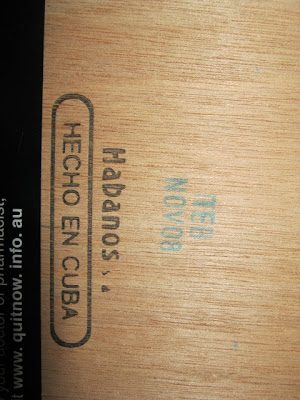 At the bottom of the box there is a pressed label saying “Habanos S.A. and HECHO EN CUBA.” Habanos S.A. is the distributing company responsible for all Cuban cigars and tobacco. Hecho en Cuba means “made in Cuba.” Along with that press, you will see a code, like mine in blue. The code has 2 parts, NOV08, stands for the year and month the cigars were boxed and made, November of 2008. The code above it, TEB, is a code they use for the factory in which it was made. The code changes from year to year to prevent forgery of their products, but I know that TEB stood for the Partagas Factory in Havana, Cuba in 2008. Now onto the cigar… 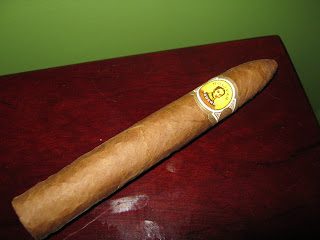 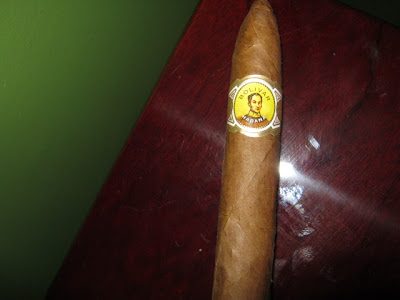 The prelight aromas of this Habanos were of nuts, wood, and milk chocolate. Once lit I was greeted by wood flavors, minor spices, and once in a while subtle hints of cocoa, but nothing dominant. Throughout the smoke I was picking up hints of leather, floral notes, coffee, and stone fruits, it was really sublime. This cigar was very well-balanced and extremely complex. The cigar staid full body throughout and wasn’t harsh until I was right at the nub, and burning my fingers. However, I have found that Belicoso Fino’s can be a hit or miss, you can get a great one, and you can get an awful one. They have their years where they are not so great and years where they are stellar, the ones made in ’08 at the Partagas factory have been right on, and that is why I picked this cabinet up when I did. If you are ever overseas, or at my house, you should definitely try this smoke, it really is a treat. I would give this cigar from the cabinet a 94, but the next one I pick up might only get an 89. That’s smoking Cubans for you, haha.