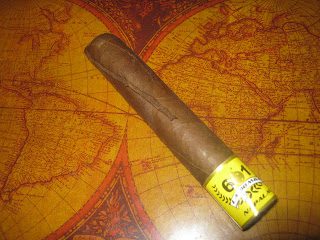 EO Brands is one of those cigar companies that is known, but keeps a rather low profile for some reason. They have been making cigars for many years now, and I have always found them rather enjoyable, but they  really showed their presence in 2009 when they scored #6 in Cigar Aficionado’s Best Cigars of the Year with the 601 Box Press Maduro Toro. Their cigars have always been made in Nicaragua at the My Father Factory by Don Pepin Garcia and his son Jaime, and you can’t go wrong when working with a family like the Garcia’s. The Garcia’s are very knowledgeable about tobacco and also great at making Cuban style cigars. One interesting fact about the company is that Pepin makes their cigars, but half of the company is owned by Rocky Patel. The other half of the company is owned, and was originally founded by two old friends Erik Espinosa and Eddie Ortega. I wouldn’t say there were not successful before, but ever since Rocky purchase half the company I think they have really become a market player. Their newest line, and one of the most anticipated releases of 2011 is the 601 La Bomba. The cigar is the strongest of all the cigars they make and is meant to be enjoyed by cigar smokers who really enjoy full bodied smokes. As you can get from the name, La Bomba is Spanish for “the bomb,” and this cigar is definitely that. The line is a Nicaraguan puro, with a Nicaraguan Habano wrapper, and from what I have been told is packed with tons of ligero. The cigar comes packaged in 10 count boxes, and is available at a great price.

The Napalm vitola which I picked out measures 5″ with a 52 ring gauge, and is one of my favorite sizes for a cigar. The cigar is rolled perfectly, as you can imagine given where it is made, and is finished with an awesome rat tail. The triple cap is perfect on the cigar, and cigar has a beautiful neutral brown and oily wrapper. I would say the wrapper is between a Natural and Colorado, and there are very few veins present on it. Holding the foot and wrapper to my nose it has strong aromas of pepper, leather and wood, and given my past experience with this cigar and just because of the aroma I know it will be strong. There are no soft spots in the cigar, and I am looking forward to lighting this cigar up. The second you light this cigar up you are greeted by tons of red, white and black pepper, cinnamon and wood. The cigar is easily full bodied and a powerhouse. As I get further into the first third I am still picking up those core flavors, but I begin to see an emergence of leather and coffee as well. The cigar is not showing any rich flavors, but rather dryer and spicy flavors. I strongly suggest that if you prefer milder cigars or even those that are medium you work your way up to this cigar in due time, and not try one of these right away. The cigar itself is burning perfectly, and I am getting a beautiful white ash with the burn that is holding on strong. The smoke that I am getting from the cigar is very thick and dense, and when blowing out of my nose I am getting more and more spices.

When I get into the second third of the cigar the core flavors are still present, but I am getting a nice sweetness as well. I wouldn’t say the cigar is showing those rich flavors that you would get with some, but there is a balance to it, and even though the cigar is very full bodied it is balanced. I am beginning to pick some curry notes with the cinnamon from before and that pepper is definitely still there. The finish to each draw shows lovely hints of oak and leather, and I am glad I smoked this after a big meal. The burn has still been perfect in this third, and the ash is still holding on strong. The Pepin’s really know how to make wonderful cigars, not just with flavor, but construction wise, and this cigar is immaculate in that sense. With that being said, Espinosa and Ortega did a great job blending this and keeping it flavorful while very strong. As I lean back in the chair, afraid to get up I prepare myself for the final third and what I know to be a continuous blast of strength. As to be expected, the final third of the cigar was still very strong. At no point does this cigar become softer or fuller in strength, but remains at the same constant kick ass state from the beginning. There is an emergence of coffee again in this third, and it pairs wonderfully with a nice sugar and spice. The spices are that of paprika and cayenne in this third, and there is that finish of black pepper. I smoke the cigar all the way down to the nub, and even towards the end the cigar is burning cool despite the strength. The flavors have remained pretty constant in the sense that they are that of spice, leather and wood, but they have changed somewhat throughout and kept me entertained. Like the rest of the cigar the burn line has been perfect, and when I put the smoke down it is still giving off nice smoke. I really enjoyed this cigar, and would give it a 90 rating. I felt that the cigar had tons of strength and was constructed perfectly. At no point did I have to relight or have a burn issue and it was an easy smoke in that since. The flavors were not as complex as I would like in a cigar, but at no point were they dull or boring. I think the main thing with this cigar is that it is meant to be a powerhouse and it definitely is. It is easily one of the strongest cigars I have had recently, and I think it will soon be the dominating powerhouse cigar on the market. I know a lot of smokers are eager for these, and though the IPCPR really showed a lot of manufacturers tending towards the mild side EO Brands did not and I think that will set them apart. If you want a cigar that will knock your socks off, put them back on, and knock them off again, this is definitely that smoke. I will say that I don’t dare smoke these in the morning and I will probably only smoke these after a meal. Actually, I will probably want to smoke one first thing in the morning to see what it would be like, but I am one of those guys who likes to do stupid things. Enjoy these beautiful sticks of dynamite.