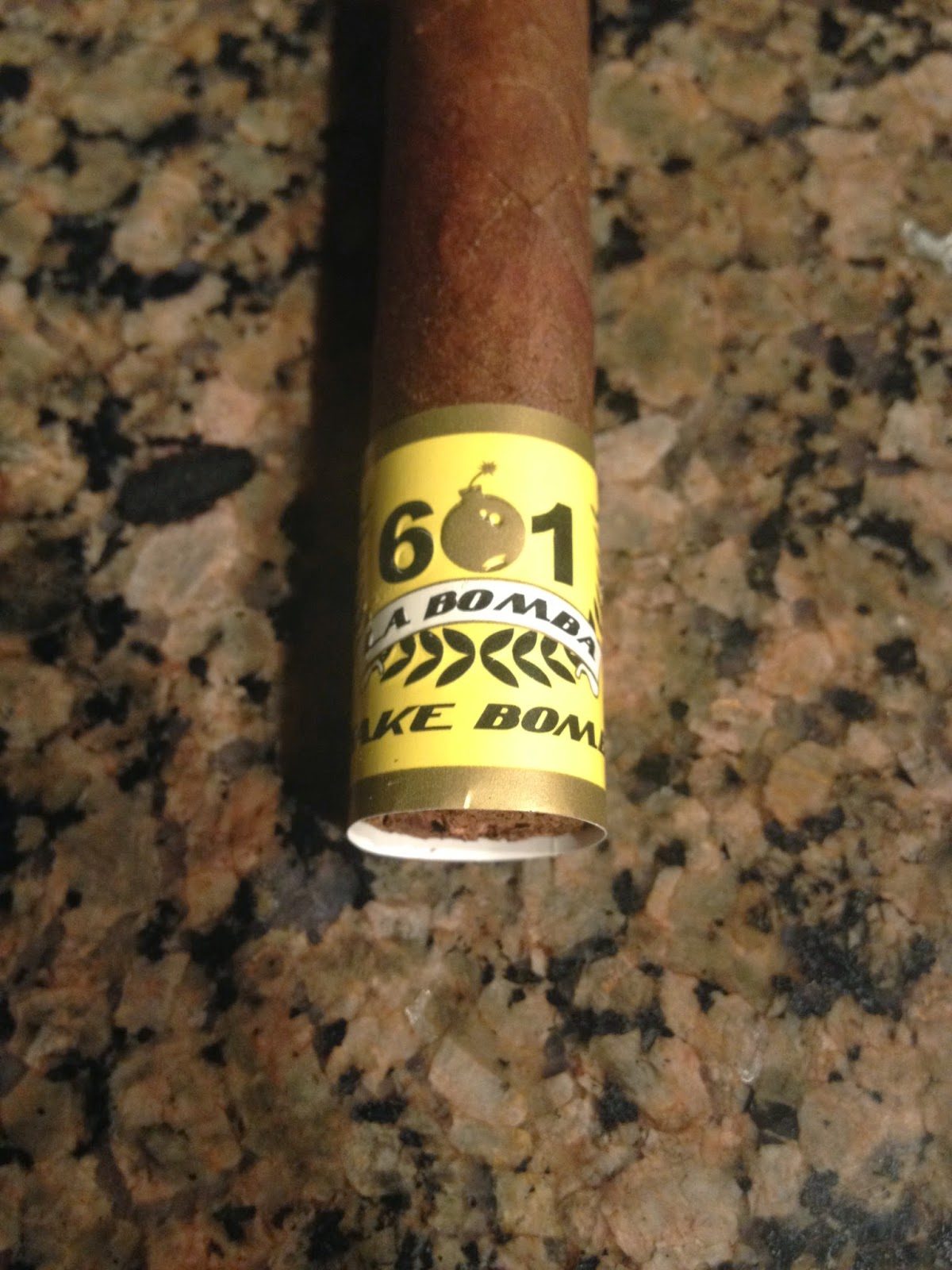 I was tempted to do this review while enjoying some Sake Bombs but I decided that was not the best of ideas. I would have forgotten the cigar, in the sense that I am reviewing it, and instead get carried away with other things. On a random note, I have always wondered what is the right beer for Sake Bombs. I tend to believe that you should use a traditional Japanese Rice Lager, such as Sapporo, but I know that there are plenty of individuals who go against the norm and get experimental. I had one friend say the best beer to use is Blue Moon White Ale, which I thought was crazy, and then I did some internet searching and found that it was indeed a good choice. I am totally off the beaten path right now, and should probably start over, but I find this randomness appropriate given the effects of Sake Bombs and the strength of 601 La Bomba.

Made at La Zona Cigar Factory, the Sake Bomb is the latest and eight installment to the 601 La Bomba line. It is the smallest offering in the line and is a size that I personally love. Measuring 4 1/2″ with a 42 ring gauge, the cigar is a petit corona and is a Nicaraguan puro. It is finished with a Habano seed wrapper and is composed of some high priming and strong tobacco. The cigar is slated to be released mid month and will be available in ten count boxes. The wrapper has a texture that is between smooth and slightly coarse and there are no oils present. There are some smalls veins throughout and it is a firm cigar with that. The coloring is right at Colorado Maduro and some might classify it as being darker than that. The aroma on the wrapper is of rich earth, very manure like, and on the foot I am picking up some notes of tobacco, soft cocoa, rich earth and spices. The cold draw shows a dryer aspect and it is more hay and barnyard like. 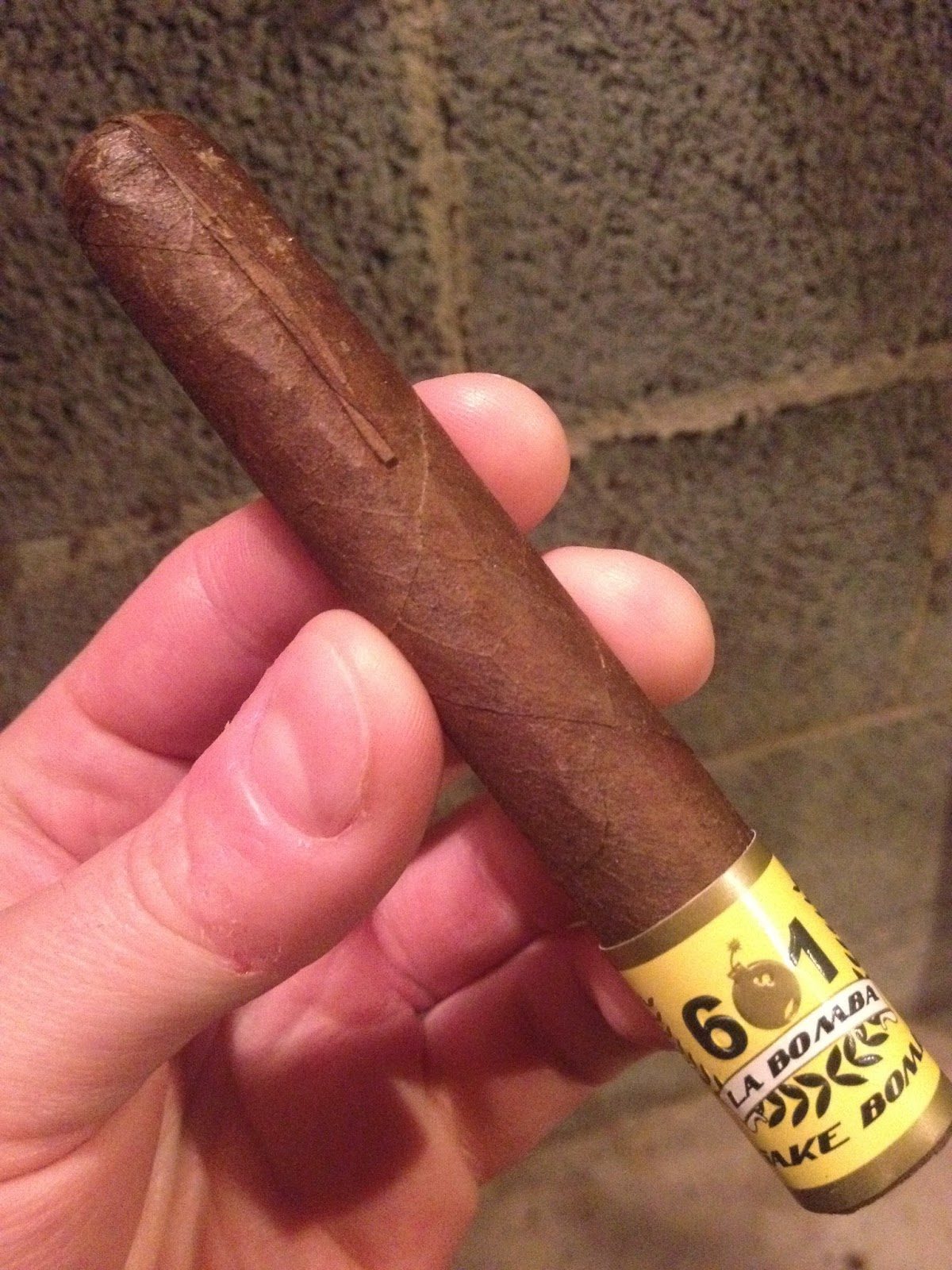 The first half opens up by showing a tremendous amount of pepper and spice. I was expecting a pepper bomb launch with the cigar, I know La Bomba, and it is a pepper blast that grabs your attention from the get go. The pepper blast is there for a little while and then it begins to open up by showing some seasoned wood notes with bits of leather and sweet earth present as well. This is easily a full body and strength cigar, and it smokes wonderfully in this small format with those qualities. I believe this size is perfect for La Bomba, and I think earlier releases were just a little too big. The construction on the smoke is perfect and it has a cool draw with a razor sharp burn line and a dark  charcoal ash. This is definitely not a smoker for everyone, it is actually aimed for a more seasoned smoker, but it has enough flavors to grab the attention of the smokers who are looking for some depth and complexity as well. 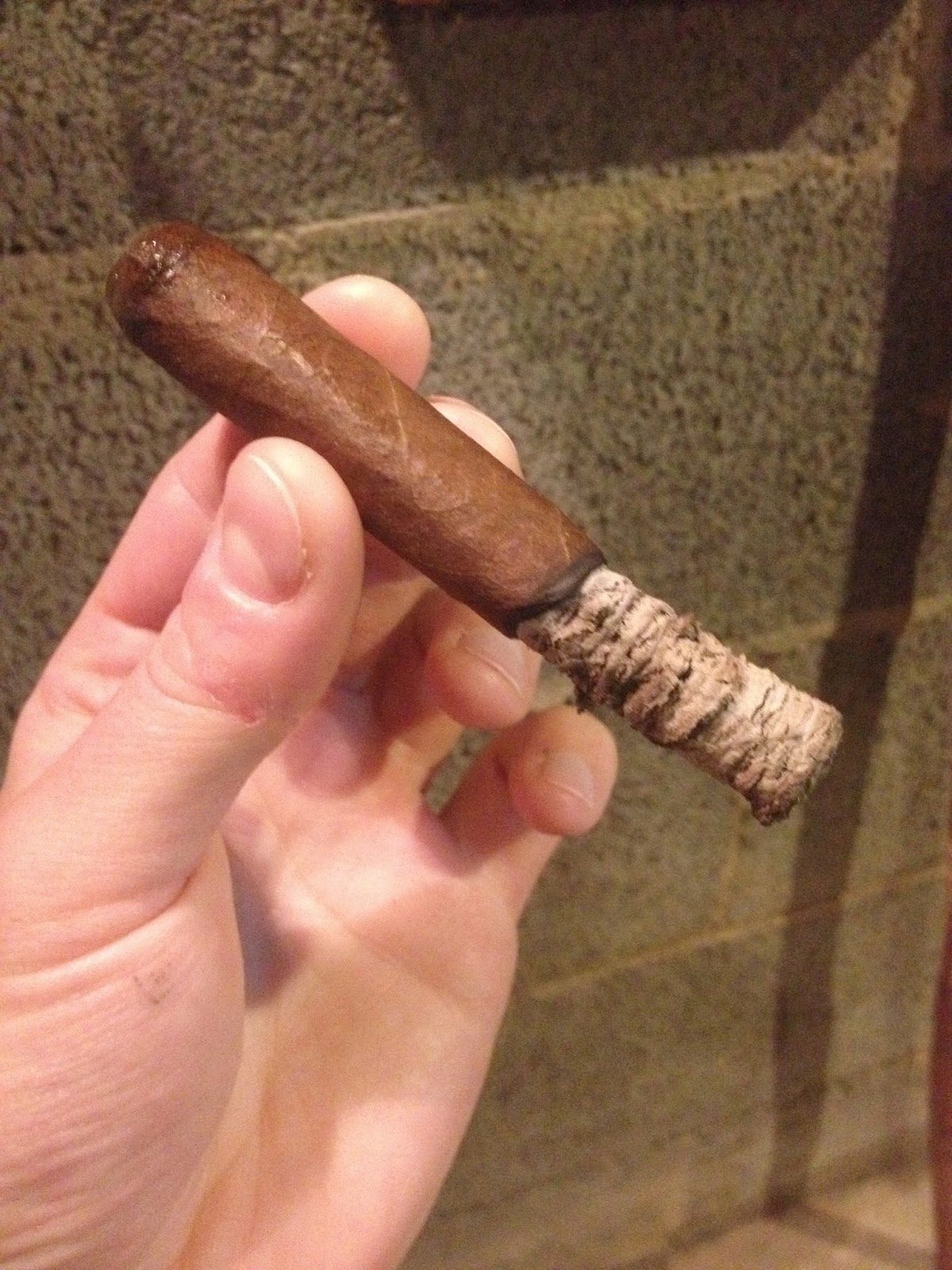 When I get into the second half of the cigar the pepper notes from the first half tone down dramatically and it is beginning to show those flavors from the first half without being bombarded with pepper notes. I am picking up some a lot of leather qualities with the cigar and it is also showing some seasoned oak notes. There are some earthy notes present with the cigar and the finish is slightly sweet with some wood notes to accompany that. The construction remains perfect in this half and it is showing a razor sharp burn line with a a nice charcoal ash that is holding on firmly to the end of the cigar. The draw is cool and with each draw I am getting a nice bit of smoke that is heavy and loiters for some time. In terms of strength the cigar is still at that full level and just because of the lack of pepper the strength has not given in. The body seemed slightly less in this half, not much, but a little bit closer to medium full overall. Honestly this is a full boy and strength cigar so even with a slight decrease you are not seeing it hit the medium level. 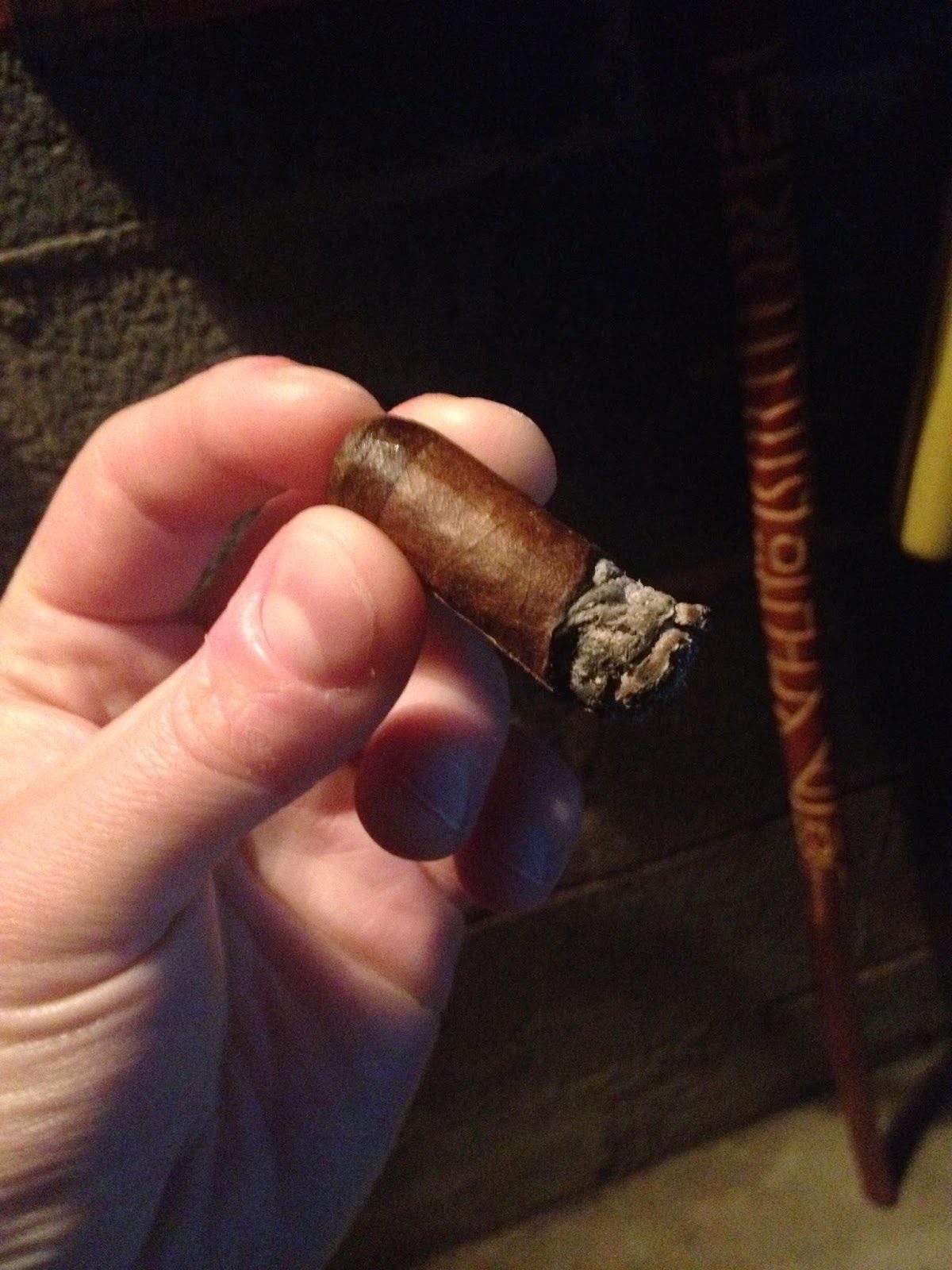 I am not what you would call a huge “modern day cigar smoker.” What I mean by that is that I do not gravitate towards a lot of pepper bombs and full body and full strength cigars. I am a guy who looks for flavors first, and I want some complexity, depth and transitioning with that. Those are my priorities, and if a manufacturer wants to make that strong or soft in strength and body along with that, that is their choice. While I enjoyed this cigar, it is not my cup of tea and is not something I would gravitate to frequently. It is a smoke that I would have in the evenings more often than not and would probably have it with some tequila or a gin and tonic. To me it showed those qualities that would complement those beverages and it is also a summer cigar to me as well. With that being said, this baby had some heat and with that was excellent construction and some enjoyable flavors. I think it is perfect for the modern day smoker and I am glad that it is released in a smaller format. I think more people should be smoking cigars of this size and I am horrified by the sight of some of these 60 plus ring gauge cigars. I am giving this cigar a solid 89 rating and would be interested to see what these age like. 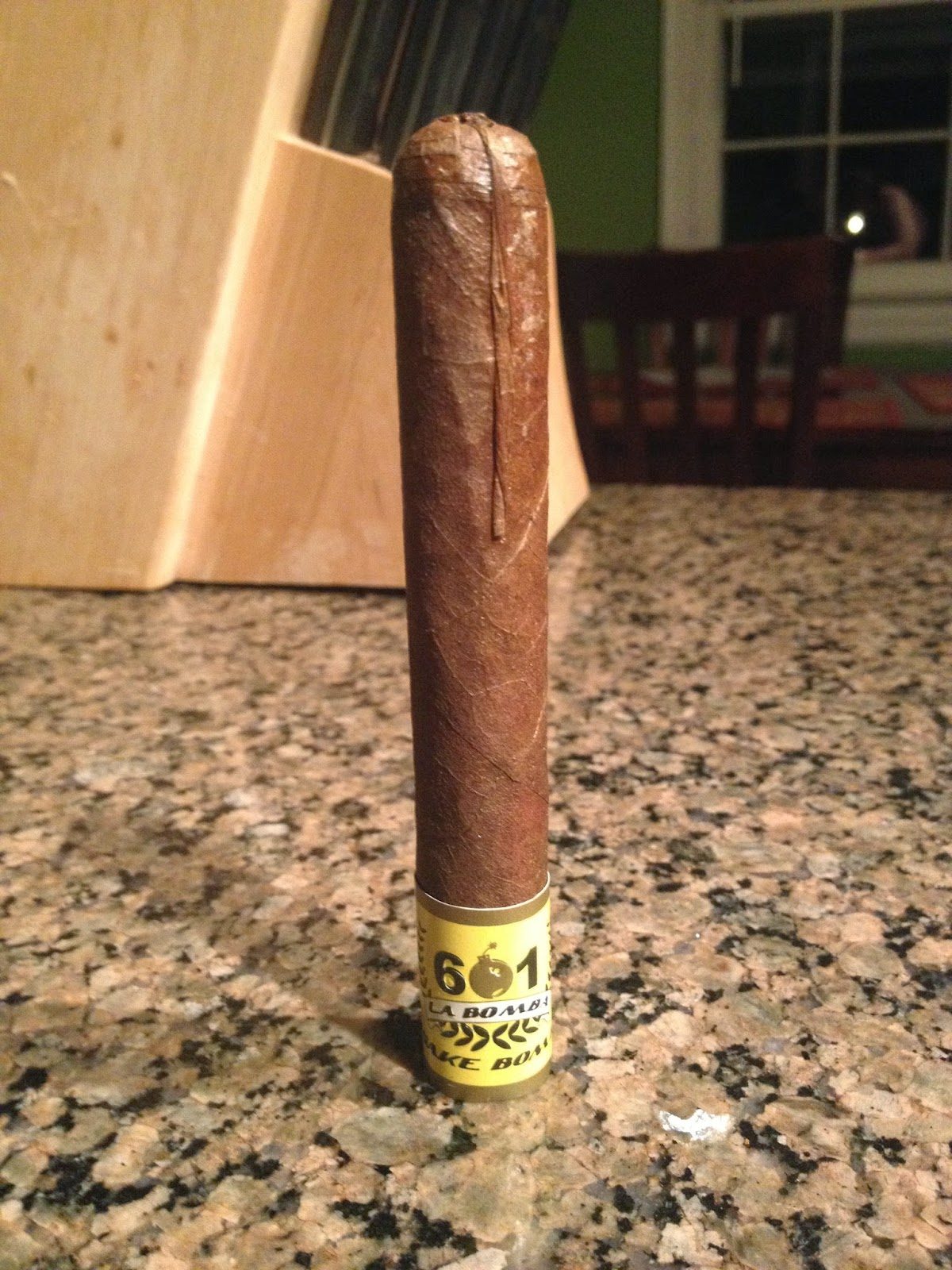 *cigars for this assessment were provided to me by Espinosa Cigars