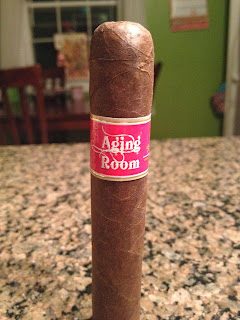 For some companies it is their first line that really puts them on the map. I would say that is the case with Tatuaje, Don Pepin Garcia, Fratello and Illusione, but for other companies it is a release that happens further into their existence that gets them to the place they want to be. It make take a few years, but eventually they have a line that really catches the attention of many out there. For Oliveros that was the Aging Room. I don’t want to say the reason for the cigar’s success is due to the rating from Cigar Aficionado, but that definitely plays a factor. Since then Oliveros has grabbed attention of smokers with Boutique Blends and each new release seems to bring more people in. Boutique Blends has had hits such as the M21, M356 and South Beach, some of those I still need to review, but they have also grabbed a lot of attention with the new Aging Room Maduro.

In some ways the Maduro completes the Aging Room brand. I can’t think of another core brands they could do now except a Connecticut, and I don’t think that would be a wise choice. The line comes in almost the same vitolas as the M356 but is a whole new blend. The cigar features Dominican tobacco in the filler and binder, but is finished with a Nicaraguan maduro wrapper that has been aged for over five years. For this review I chose the Presto, which measures 4.5″ with a 48 ring gauge, and is made at Tabacalera Palma in the Dominican Republic. The cigar features a wrapper that is very smooth to touch and is not oily or gritty at all. There are some large veins here and there, but it mostly has small veins throughout. The coloring is a solid maduro, and it is a simple but pretty cigar. The aroma at the foot is of chocolate and raisins, and the wrapper shows some tobacco, pepper and cocoa qualities. 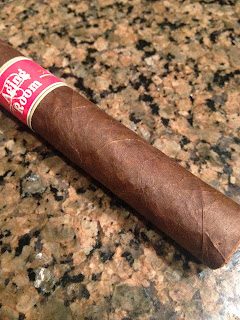 For this review I am going to be breaking it into halves and the reason for that is because I found the biggest flavor change at the halfway mark. The cigar begins by showing some terrific pepper notes. I am getting some rich and sweet notes from the wrapper, but I am also picking up that Dominican Habano flavor profile. There is a nice bit of spice and pepper flavors up front and it then shows some cocoa powder and coffee notes on the finish. It definitely have a nice body and strength level, and it is nice little petit robusto for the afternoon or evening. I would probably smoke this in the later afternoon or evening, but I could light one up late morning as well. In terms of construction this cigar is up there with the best of the best. I am getting that razor sharp burn line and it has a nice white charcoal ash holding on with that. The draw is perfect and this is an enjoyable first half. 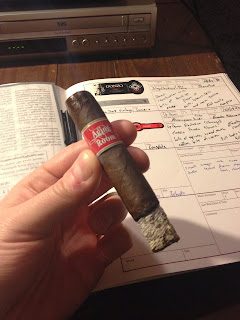 The final half of the cigar shows a mellowing of the spice and pepper notes from the first half and a rise in some of the earthy and cocoa notes. The coffee flavors make a push as well for the forefront, but they are still behind those cocoa and earthy notes. The pepper and spice qualities are still present, but when looking at them from the first half they have definitely come down a notch. I am still getting some strong cedar notes, that have been present throughout, but softer than before. In terms of body I would say the cigar is easily at a medium full level and the strength is there as well. To me it shows the body and strength that you get with a Nicaraguan Habano Maduro wrapper, and the Dominican filler and binder definitely add to that. The construction in the second half of the cigar is still as perfect as it was in the first half and this is a cigar that you can sit back and have no worries about when smoking. The final draw on the cigar is cool with a nice bit of smoke and it has a lovely cocoa, tobacco and woody finish. 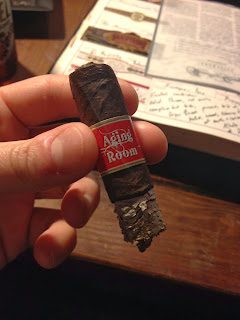 I have smoked a bunch of these, and each time I have had different experiences. There are times when I really like this cigar and there are times when I am entertained by the cigar but I am not blown away with the cigar. Overall it is a cigar that shows change at the halfway point and not in thirds. I don’t believe that has anything to do with the size, but the blend of the cigar. To me it is a cigar that shows a nice bit of wood, coffee, spice and dry sweet cocoa notes from beginning to end. I did find the construction incredible, and the cigar had a beautiful ash, but it was in the complexity and flavor department that I was not blow away. I would smoke the cigar again, and I think it is a solid release from Boutique Blends, but it not my cup of tea. I am partial to maduros anyway so when I have the option of choosing Habano or Maduro I am going to go with the Habano. With that being said I am giving this cigar a solid 90. I do not like it as much as the M356, but I know a lot of guys are digging this smoke. Speaking of the M356, how have I not reviewed that!? 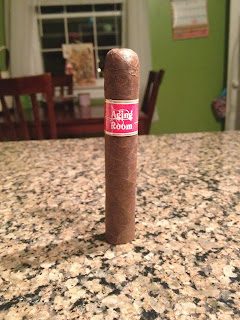