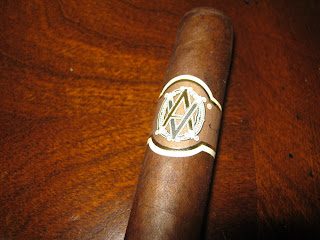 I was looking at this cigar in the humidor the other day, and I remember when it was released in 2010. When this cigar was first released it got so much great press as being one of the best cigars of the 2010 trade show, but since then it has taken a back seat as most cigars do after a couple years.  Well, here I am a couple years later about to review it publically finally. It is just recently that I have begun reviewing AVO Cigars, and I had someone ask me what led me in that direction. I have always found that AVO Cigars were entertaining, but I never smoked them that often. I think one of their downsides as a company is that they haven’t released a new regular production line in sometime, and instead of been releasing limited releases annually. I am not bashing their older lines, they are still great, but people around the world always love new things. As I said earlier, the Heritage line was released in 2010, and was a line that challenged the lighter strength side of previous lines released by AVO. I don’t get into the price point area of the cigar ever, but the cigar is also slightly more affordable as well compared with other releases. The cigar is made by Davidoff at OK Cigars in the Dominican, and features tobacco from similar regions as you see in their other cigars. The cigar begins with an Ecuadorian Sun Grown Hybrid wrapper, and utilizes a Dominican Saint Vincente leaf as the binder. The filler is composed of Dominican Ligero and Seco, and also has some Peruvian tobacco present as well. For this review I am smoking the Churchill vitola, and the cigar measures 6 3/4″ with a 48 ring gauge. The wrapper is a solid Colorado color, coloring of wood and milk chocolate, and has some veins present in the oily wrapper. There is a nice aroma of nuts, grass, wood and leather at the foot, and it is a firm cigar.

As I light up the first third I am greeted by those well known flavors that are common with smokes by Henke Kelner, and it is showing some cedar, hay, grass and leather notes. There are some soft cocoa  notes present as well, and there is a lot of spice present for an AVO cigar as well. It is not overly spicy, but much more than usual smokes. The great thing about AVO Cigars is that they are always consistent and enjoyable from box to box and year to year. It is burning wonderfully, and producing a decent amount of smoke as well. I would say the strength level of the cigar is around the medium body level, and perfect anytime of day. The ash is holding on to the cigar firmly, and it has this solid charcoal coloring to it.

I am in the second third of the cigar now, and this is like no other AVO. The strength level is in the higher medium range, which I don’t often find with AVO smokes, and it has some darker and bolder flavors than I get with their smokes usually. There is a nice cocoa, nutty and toasty flavor profile to the cigar, and I am still getting those hay, grass, wood and leather notes as well. It is a very entertaining smoke, and in no way one dimensional or boring. The burn line is still solid in this third, not perfect, but damn close. There is a nice charcoal colored ash on the cigar still, and though I dropped the ash from the first third, the ash is holding on to the cigar quite firmly. I am getting some nice thick smoke with each draw and definitely smoke ring quality.

When I get into the final third of the cigar the flavors are really popping, and the cocoa notes from before are much more present than in the second third. Of course, I am still getting those nice wood, hay and grass notes that you get with AVO smokes, but they are not as dominant as they usually are. There is nice leather flavor profile present with the cigar as well, and the finish is really that of spices. There is a nice black pepper flavor profile present with the cigar as well, which is a change of pace. The cigar is still burning perfectly in the final third, and the ash has kept that solid gray coloring as well. I smoke the cigar down close to the nub and it is finishing slightly above medium and smoking cool.

I really enjoyed this cigar and consider the Heritage to be the best line of the AVO brand. I feel that cigars deliver a little more strength that I look for in a cigar, and also have some more complexities in terms of flavors that you don’t get with other AVO smokes. Overall, the cigar is made just as well as any other AVO, and that means top notch. If you are a fan of AVO smokes, and typically gravitate towards milder cigars than I would reach for this later in the evening, as a post-dinner smoker. I think any cigar lover would enjoy this cigar, and I think it is great as an early afternoon cigar most days of the week for me. I give this cigar 91 points, and I am definitely glad that I cam back to it.