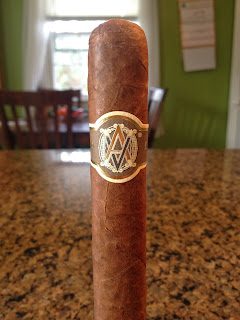 The TAA retailers have been gifted with some terrific cigars the past couple years and this year was no exception. With companies like Tatuaje, Padron, Ashton, La Flor Dominican and Joya de Nicaragua producing smokes for these limited retailers, this year we also saw AVO join the ranks and produce a limited edition smoke. AVO is a unique company because it is a company that I overlook quite frequently. I know that is bad to say, but I want to be honest. It is not that I think they make poor cigars, they don’t, I just do not reach out to them that much. Two weeks ago though, a good friend of mine though told me of this cigar and said t was a game changer. Of course he had to give me one in the attempt to throw of my Top 25 Cigars of the year.

The Movement is the first TAA exclusive cigar from AVO, and it is a box pressed toro that measures 6″ with a 52 ring gauge. I have not seen a box pressed AVO before, but that is my recollection. The cigar features Dominican tobacco in the filler and binder and it is finished with a wrapper from Ecuador. The cigar is softly pressed and it has a nice slight softness to squeeze. The cap is placed lovely and the wrapper is applied perfectly. There are some minor veins present throughout and the wrapper has a texture that is fairly smooth with some very fine grit present as well. The coloring is between Natural and Colorado and it has a very faint reddish brown appearance. The aroma of the foot is that of soft spices, tobacco, hay and cedar, and I am getting an aroma of sweet tobacco and wood off the wrapper. 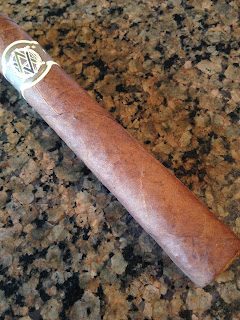 The cigar begins by showing some nice tobacco and black pepper notes, and there are some lovely hay qualities with that. I am getting some sweet wood and coffee flavors alongside those, and it has a nice caramel and coffee flavor profile finish. It is a very tasty cigar and it is a smoke that shows all of the Henke qualities, but also has some bolder and unique qualities. The cigar is smoking at a solid medium strength level and the body is right there with that. It is a very balanced cigar, and it is a classic AVO while so much more. In terms of construction the cigar is showing a perfect burn line and a solid light gray ash holding on with that. The cigar is producing a great amount of smoke and I am getting some great smoke rings. So far it is a tasty first third and I look forward to the second third, I think it a solid AVO, that is for sure.

I am in the second third of the cigar now and I find the cigar to be growing in terms of body, and it is getting bolder. The black pepper notes are much more prominent than before, and it is pairing with those coffee and tobacco notes. I am still getting that classic Henke hay flavoring, and it has a lovely bit of caramel and lemon zest on the finish. This is probably one of the most tasty AVOs I have had and you can tell they did something special for this limited smoke. The body and strength are slightly above medium in this third, but it is not at that medium full level yet. In terms of construction this cigar is a beast and it is showing an amazing burn line with a charcoal ash that is holding on firmly from lighting up. I am getting a nice bit of smoke with each draw and it is a nice thick smoke. All I can say is that Coop was right. This is a solid smoke. 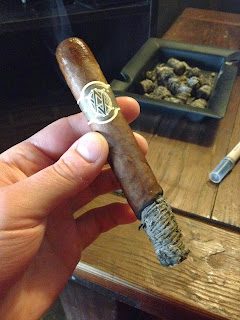 The final third shows a softening from the second third and it is a near return to the first third. I would say the pepper and tobacco notes are softer in this third though. The sweet wood and caramel flavors are more prominent than before, and they are then followed up by those hay and lemon zest flavors. In terms of flavors the cigar is complex and very balanced. I liked the transitioning that the cigar possessed, and it is a cigar that could many smoke and enjoy. The body and strength were a little bit above medium in this third and throughout the whole smoke it has remained at a level that is between medium and medium full. The construction has been nothing but phenomenal from the beginning and that is not surprising given the factory being used for the cigar. I get a cool final draw and it produces a nice bit of flavors with that.

I really enjoyed this AVO and it is an AVO that makes me want to smoke an AVO. I typically do not reach out for their cigars, but with blends like this I would. I always look at the company as a more affordable Davidoff, same as Zino, and I know that is wrong. I found that the flavor profile possessed all the qualities you would want with a cigar and it had depth and complexity with transitioning from beginning to end. In terms of body and strength the cigar was at a level that many cigar smokers could reach out to, and this could be an afternoon or evening cigar. I have had two TAA exclusive cigars this year and I can say that they are great releases for those stores. If you find yourself with the opportunity to pick some of these up I would not miss the opportunity, they are treats that will smoke wonderfully now and with some age. I am giving this cigar a solid 92 rating. 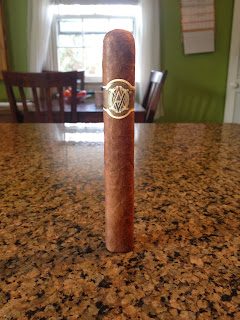 * cigar for this assessment was provided to me by Cigar Coop