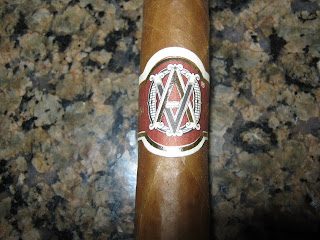 When one thinks of high quality cigars and consistent cigars there are some names thrown around, but I can safely say that AVO Cigars is near the top of that list. Having been in production for many years now, AVO has released several limited edition smokes and has many regular lines in production that are of the highest quality. The line has always been produced by Davidoff Cigars, and it is because of this that the line holds all their great qualities and some uniqueness to that. In production since 1988, the line takes its name from its creator Avo Uvezian. Mr. Uvezian has been involved in music his whole life and has had the pleasure of performing for the former Shah of Iran and also being a writer of the song “Strangers in the Night.” His musical career is visible through his cigar packaging, and with that comes a sense of classiness. For this review I will be reviewing a line that was created following a successful limited edition.

Introduced in 2001, the Signature line was released in someway to recreates the AVO 75th Anniversary  blend. The cigar features the same blend in the filler tobacco as that limited edition, tobacco being all aged Dominican tobacco, and features a four year aged ligero leaf from the Dominican as the binder. To finish the blend, the cigar was draped with a special “sun-grown” wrapper from Ecuador that was fermented several times at the Davidoff Factory. The line consists of five vitola, and for this review I am choosing the Lonsdale. The Lonsdale vitola gets its name from Hugh Cecil Lowther, the 5th Earl of Lonsdale, and is a cigar that is typically long and thin. The Signature Lonsdale measures 6.3″ and has a 42 ring gauge. Made in the Davidoff Factory in the Dominican Republic this cigar is rolled perfectly and is firm in hand. The wrapper has this beautiful Natural/Claro coloring, and has a color of natural faded wood. It is silky to touch and the aroma has bits of spices, wood, leather and hay.

The cigar begins wonderfully, and is very light and complex. It definitely has some flavor profiles prominent in Henke Kelner smokers, and I am a fan of that. People often say you can taste what cigars are coming out of what factories, and that is definitely true with smokes coming out of the Davidoff Factory. There are nice notes of coffee and hay, and they are accompanied by bits of lemongrass and spices. I am picking up some subtle creamy notes, and that is paired with this nougat flavor profile. The cigar has a perfect burn line to it, and there is this solid charcoal colored ash with the cigar. I would say the strength of the cigar is slightly below medium in body, and perfect for the first smoke of the day.  When I enter the second third of the cigar I am getting a lot of those similar flavors from the first third, and they are very enjoyable! The nutty characteristics are still present and pairing wonderfully with the wood and hay notes present. There are still some lemongrass notes present as well with the cigar, and it has a nice finish of coffee and cocoa. It has become more complex in this third of the cigar, and the increase flavors have made it even more enjoyable than it has been. The charcoal colored ash from the first third is still holding on to the cigar at this point, and I am getting that razor sharp burn line as well. The strength is at a solid medium body right now, maybe a little softer, and this is really a treat.

I am in the final third of the cigar now and the flavor profile has become more complex and changed. I am not getting as many lemongrass notes in this third, but there are still some coffee and cocoa notes that are dominant at the beginning. They hay and wood notes really have become a little more dark and damper and it is bringing this humid barnyard flavor profile to mind. The finish is a little earthy, and I am getting this mushroom characteristic that I get from time to time with some smokes. The cigar really burned wonderfully throughout, and I am still looking at a razor sharp burn line and a solid charcoal colored ash. The cigar smokes cool all the way to the nub, and the strength remains at that medium body level to the end.

The Lonsdale is really a great vitola, and I think it did wonders for this line. With such a beautiful and flavorful wrapper you really want to experience it first hand, and there is not better way to do that than with a thinner ring gauge cigar. I know many smokers will not gravitate towards the Lonsdale vitola, but I urge you all to be transcendentalists and take the road less traveled. Leave that comfort zone and branch out to a thinner ring gauge cigar. The cigar performed wonderfully in terms of construction, and had complex and balanced flavors from beginning to end. I don’t remember ever smoking the Signature line by AVO, but if I had I had forgotten how enjoyable they were. I give this smoke a 91, and will definitely be enjoying them down the road for breakfast.