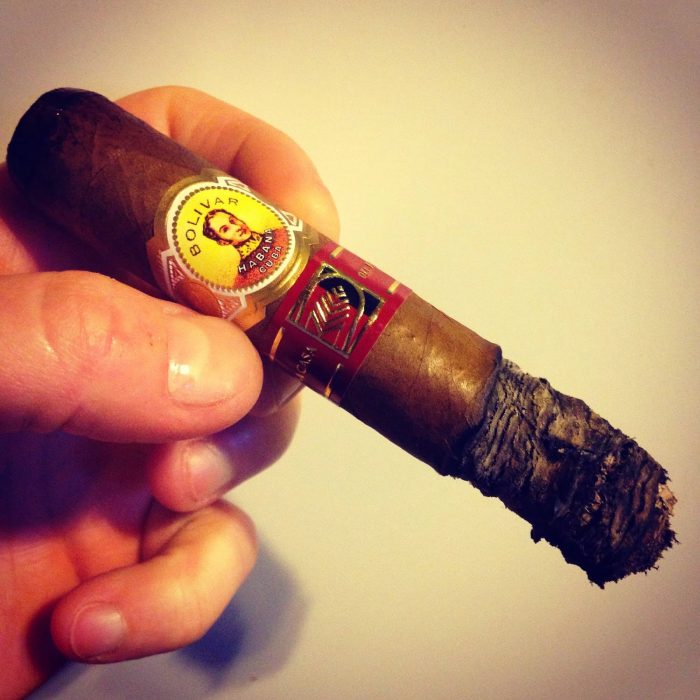 Simón Bolívar is a well known figure in Latin American history, and he is considered by many to be one of the most important figure in history of the Latin American countries. He was able to take advantage of the Spanish Empire situation in South America, and establish the countries of Venezuela, Colombia, Ecuador, Peru, and Bolivia at the time of his death. In fact, he was such a great revolutionary that once Spain lost control, and he attempted to take the position of “lifetime President,” the people would not have it. Many countries have statues of him today in their capital cities, and because of the impact he had in Latin America, a brand was created to honor him. He is known as Libertador or The Liberator in Latin America, and that is why in 2013, 230 years after his birth, Habanos S.A. announced the latest LCDH exclusive, the Bolívar Libertador. 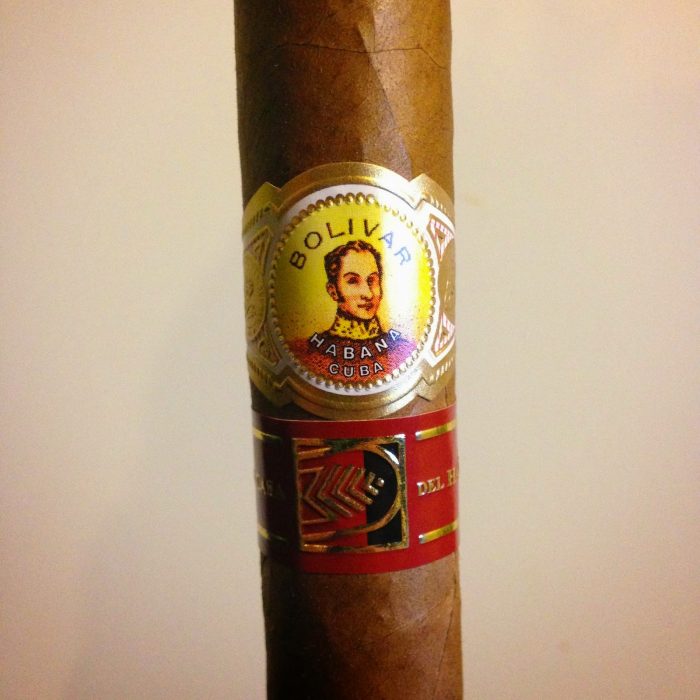 Libertador is a Sublimes in classification from the factory, and it is a double robusto that measures 164 mm (6.5″) with a 54 ring gauge. The Habano is composed of tobacco, only from Vuelta Abajo, and it is rolled in Habana at El Rey del Mundo Factory. The packaging for the actual Habano features the regular production band and LCDH band, but the box packaging is completely different, paying tribute to the packaging of the brand back to the early 1900’s, something Habanos S.A. is doing more often. Libertador comes with a brittle wrapper and it shows very few veins throughout. It has a nice Colorado coloring overall, and it is a consistent coloring. The wrapper is very smooth in texture and there is a nice firmness throughout with only one soft spot that is concerning. The triple cap is applied well and it has a nice flat finish overall. The wrapper gives off a nice aroma of barnyard, manure, and hay, and the foot is showing notes of cocoa, earth, and tobacco. 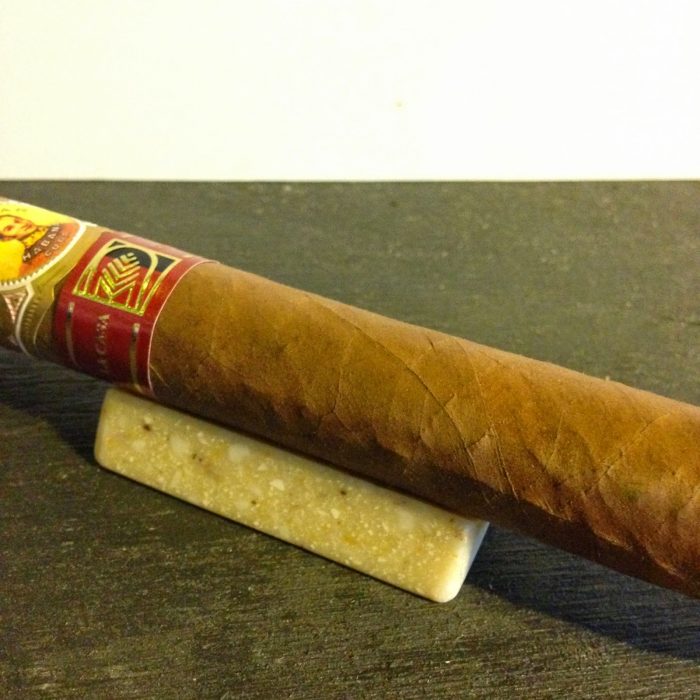 The first third opens up and shows some amazing flavors, flavors that are reminiscent of Bolívar. It is showing some strong notes of cinnamon and anise, and I am picking up some clove notes on top of that. There are some coffee bean qualities present as well, and it has a nice barnyard flavors to finish that has some earth and wood qualities. It is very balanced and complex, and it is a solid flavor profile that I love all times of day. I would classify the strength and body of the Habano as being medium overall, but there are some who would say it is softer than that. The strength I will not argue could be softer, but it is the body that is really keeping up with the flavors, making for an incredible smoking experience. The construction is nice in the first third and it is showing a fairly razor sharp burn line with a dark charcoal ash on the end. The ash is holding on firmly, and I am getting a lot of smoke produced with each draw. 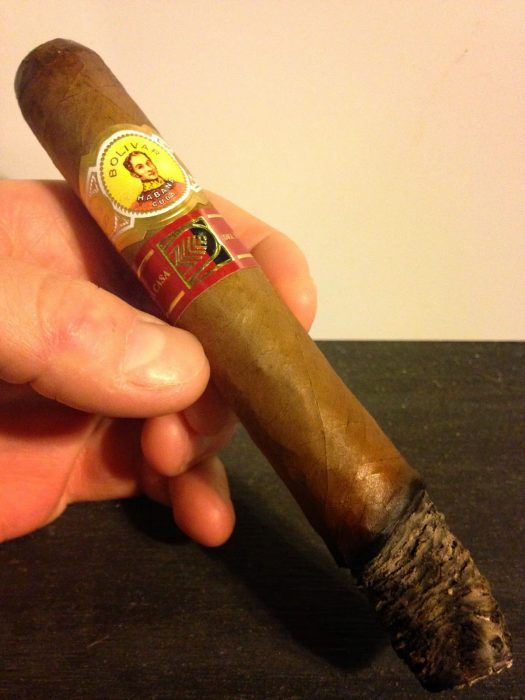 As I move into the second third, the rich earth and coffee bean flavors grow, and I would say it is more dark roast coffee grinds now. The spice notes are more peppery than they were before, but it still showing some cinnamon and anise notes. There is a nice bit of wood present as well, and it has an oaky quality with a nice strong tobacco finish. It has grown in flavors, but it is still balanced even with the growth. The flavors continue to be matching with the strength and body, and I would say that the body and strength are now at a solid medium level, maybe more medium-full in body overall. It is a very balanced smoke and I am loving how everything is working off of one another. The construction remains top notch in this third and it is showing that even burn line with that dark charcoal ash on the end. The draw is cool and smooth, and it gives off a nice bit of smoke with each draw. 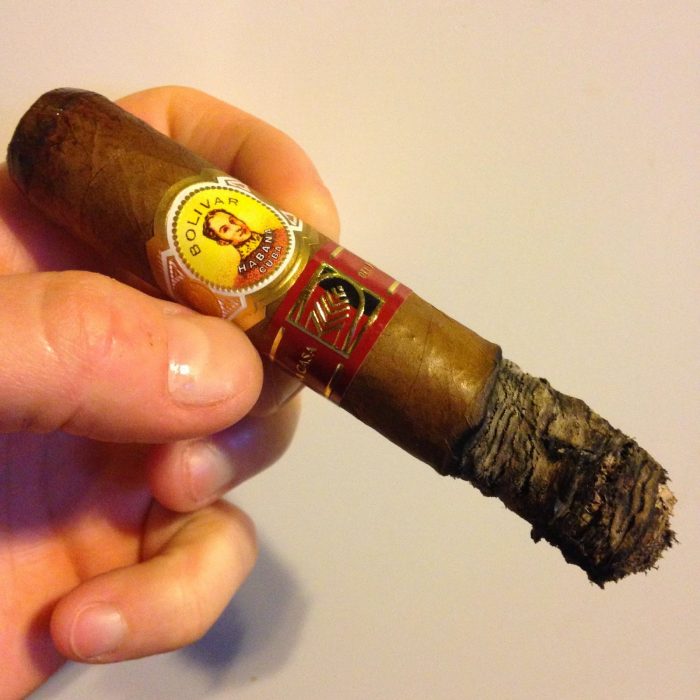 The final third shows some flavors that are similar to that of the second third, but there are some changes present as well. It is showing some additional herbal notes in this third, and they are pairing with the spice and wood notes. There are touches of earth present as well, but the coffee notes have faded some on the finish. It is a complex blend that has had some growth throughout, and I think in years it will improve more. The strength and body tone down some to a medium level in this third, and it finishes where it began in that sense. The flavors matched with the strength and bod throughout, and it finishes at a level that makes me want another one right afterwards. The construction remains solid in the final third and it is showing an even burn line all the way to the end. The ash has a dark charcoal coloring as it has had throughout, and it is producing a great bit of smoke with a cool draw to the end. 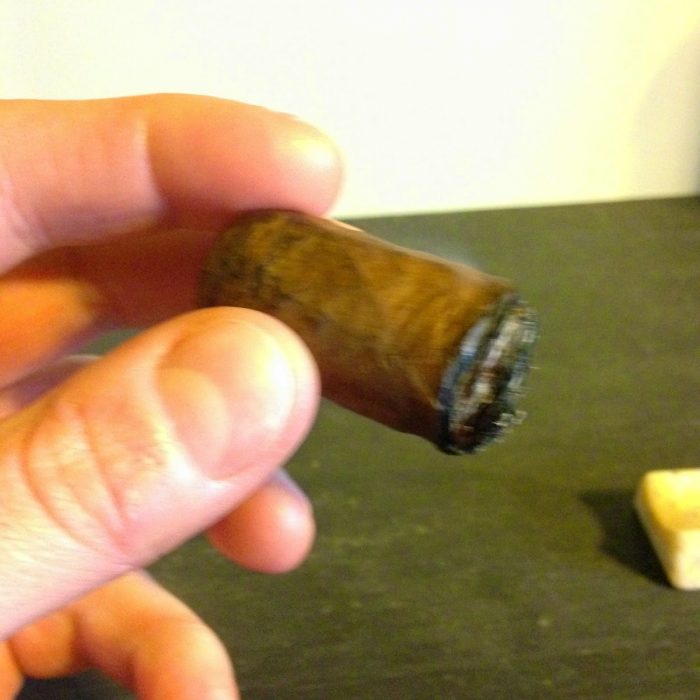 Bolívar Libertador is a terrific release and a great addition to the brand. I have always been a fan of the Sublimes vitola, and this is a nice one at that. This is not the first time the brand saw that vitola, there were two regional releases in 2006 and 2010, and I believe it was with those regional edition releases that Habanos S.A. realized that they needed to bring the size back in one way or another for the brand. On an interesting note, it is the only brand to receive the vitola three times. It delivered a nice flavor profile throughout the Habano, and as the cigar progressed it grew in flavors. The body and strength were at a solid medium level for the most part throughout, and it had an aged quality for being as young as it is. With a great construction on top of that, this Habano is one that many fans of the brand would enjoy, and it has a nice modern vitola offering with the size to grab the attention of a lot of smokers. I would give this Habano a rating of 89-91 right now, but with age I believe it could be a 93-94. 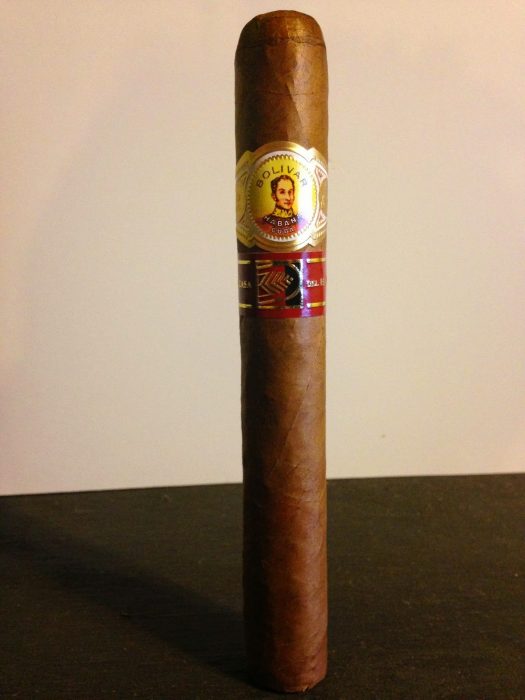