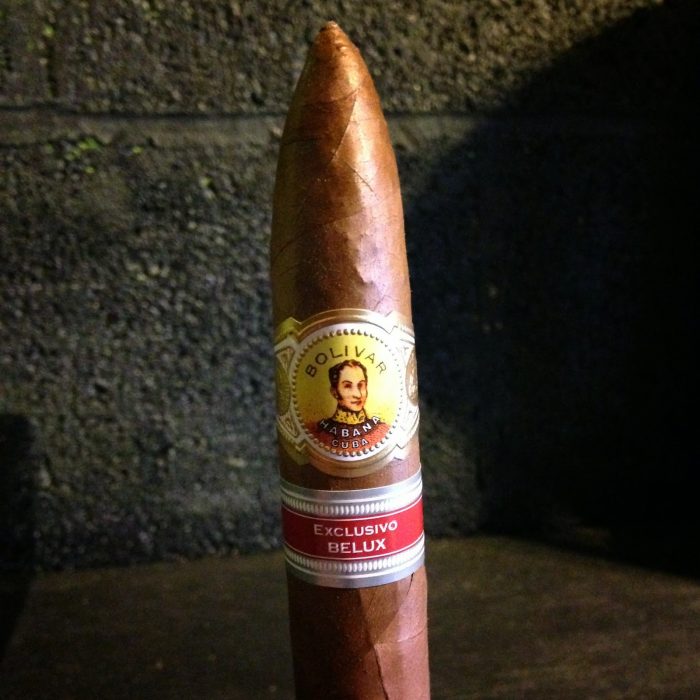 Belux is not a specific country; let’s begin there. Sometimes with the regional program you can tell by the bands where the Habanos is designated: Alemania is for Germany, España is for Spain, and Italia is for Italy, but with bands that say Benelux or Belux, it is easy to get confused. Benelux is actually a union of three countries, Belgium, Netherlands, and Luxembourg, and Belux is a combination of Belgium and Luxembourg. You would wonder why the countries come together for a regional program, but when you look at the cost, the sizes of the country, and the market, it makes sense to come together to create a regional release and have it do very well. That is why over the years, you have seen these countries come together to have a regional release. In 2013, Belgium and Luxembourg teamed up to create the Bolívar Poderosos Edición Regional Belux, and today I look at this Rodolfo or Double Pyramid.
The Double Pyramid, known as a Rodolofo in the factory, is 180 mm (7.1″) in length, and it has 54 ring gauge. This is a massive Habano. It was released in 2013, and a total of 2,000 boxes were made. They were packed in an 8-9-8 format, and this was the seventh time that Habanos S.A. used the vitola, second for a regional release. The Poderosos is quite impressive and is rolled phenomenally with the bands being applied perfectly to finish it off. It is firm throughout, and it has a tapered head that is perfect. The wrapper shows minimal veins and it is applied perfectly to the binder and filler tobacco. The coloring is fairly light overall, and it has a nice balance between Natural and Colorado. I always prefer a Bolívar with a lighter wrapper, and that is because the flavor profile is better overall in my opinion. 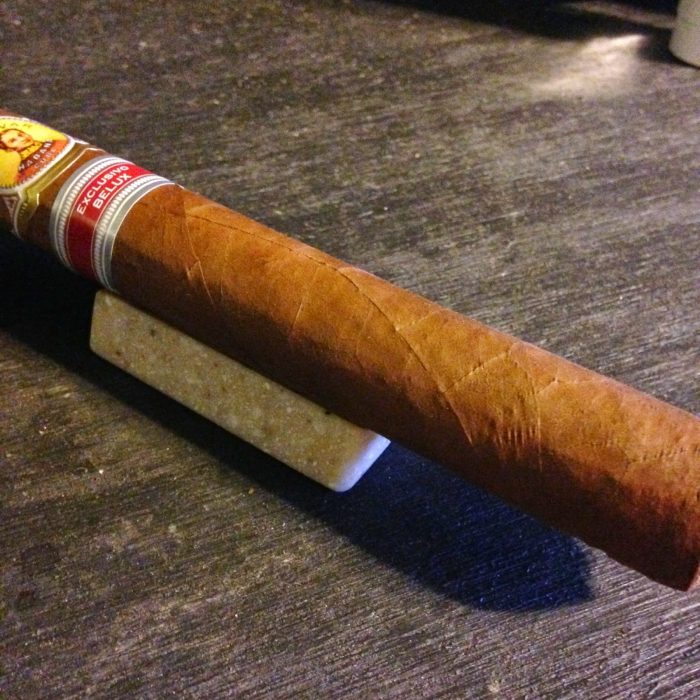 The first third begins by showing some nice Asian spice notes, and it has some pepper and cinnamon notes right out of the gate. There are some cedar flavors present with that, in some ways adding to the intensity of the spice, and it is followed by some coffee bean, tobacco, and soft earth notes. It is showing some qualities with the brand, but it is also smoother and more balanced overall. It is still a fairly young Habano, but it has an aged quality to it with the flavors being produced. The construction is top notch overall and it has a nice burn line with a solid charcoal ash on the end. The ash is holding on firmly, and there is a cool draw with that. It is a fairly large Habano, so I was expecting this coolness and ease, but it is still an important quality to have. Overall, I would say that it is smoking at a level between medium and medium-full, and this is a nice beginning. 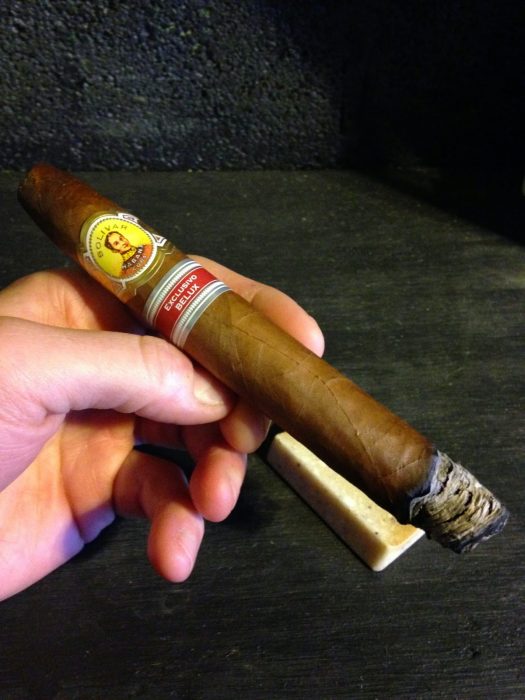 When I move into the second third of the Habano, I find that the spice levels remain fairly similar to where they were in the first third, and the cinnamon and and pepper notes are constant. The coffee bean flavors are fairly constant as well, but the earth and tobacco flavors are much more pronounced, and I am getting some subtle dark cocoa powder flavors with that. It is opening up more and more, but it is still remaining balanced overall. There is a nice toasty and woody quality with that as well, and it is a complex blend. I would classify the strength and body overall as being around medium-full level still, and it still matching well with those medium-full flavors. As said earlier, it is a complex smoke, and it has a lot of balance to it. The construction remains top notch in the second third and it is showing a better burn line that is now even, and it has that charcoal colored ash on the end. It has a smooth and cool draw, and I am getting a nice bit of smoke with each puff.

The final third is showing some more transitioning and addition to flavors now, and I am getting some more toasty, nutty and woody qualities to go with the tobacco and earth flavors. There is a bit of cocoa on top of that, and it has that finish of cinnamon, pepper and coffee beans. I love the flavor profile and really like how it has grown as it has progressed, and this is what every great Habano should do. Bolívar has a classic flavor profile to begin with, so whenever I come across that flavor, I am blown away. The construction remains great in the final third as well and it has that even burn line with nice charcoal colored ash on the end. The draw is cool, producing a nice bit of smoke, and it is a Habano I would come back to over and over again with all the great qualities. The body and strength remain at that medium-full level, and it smokes wonderfully down to the tapered end. 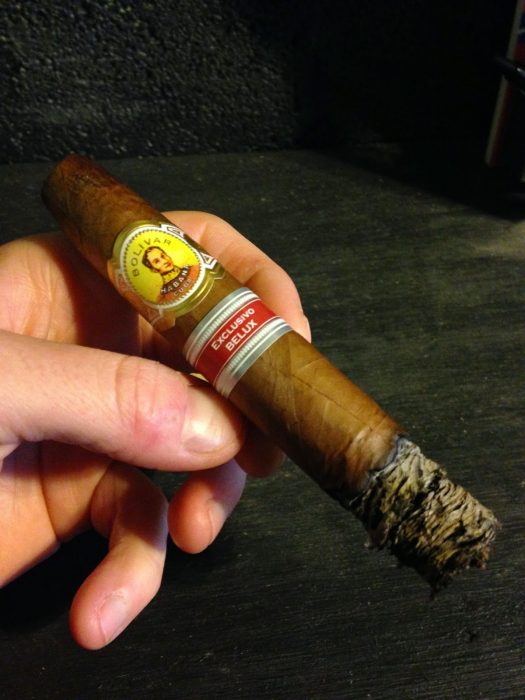 While I have my problems with the regional program, I do see the benefits that come with it and the intentions of Habanos S.A. With a regional release, retailers have the opportunity to pick a brand and/or vitola that typically you can’t get or would not do well in that market, and have it be successful. There is a reason that the Rodolofo vitola is not in regular production, and that is nothing against the vitola, it merely has to do with the fact that it is a huge Double Pyramid and no one really smokes it. But, when you add that to a brand like Bolívar and make it a regional release, you have something that you  can work with, and something that can really grab smokers. Heck, you can even have it be in demand worldwide if it is really good. It is a fun way to give consumers the opportunity to have something very different or something that they can’t get but would like to more often. You have countries like Lebanon that continuously produce Ramón Allones releases in double robustos and robusto extras, and that is because they can’t get them regularly, but their market is in demand for them. 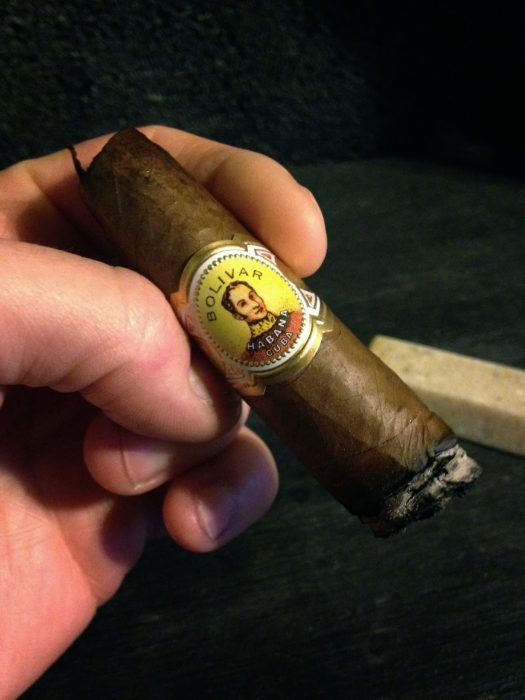 The Poderosos is a nice example of Bolívar that stays true to the line but is also unique in its own ways. It has terrific construction throughout, and it delivers a bouquet of flavors that are enjoyable no matter the time of day. The strength and body really match the flavors of the Habano, and the combination is one that will do well with age on it. I’ll tell you this, with more age on this Habano, it will really open up and become this gigantic smoke that is even more balanced and flavorful. This is a complex Habano, and one that I would come back to down the road. Given the size, it is not a smoke I would have in the morning or most evenings, but it is a terrific weekend Habano, and a special occasion smoke as well. It is just over a year old right now, and I would say that it smokes between a 91 and 93, but with age, it will be even better and smoke in the mid to high 90’s. 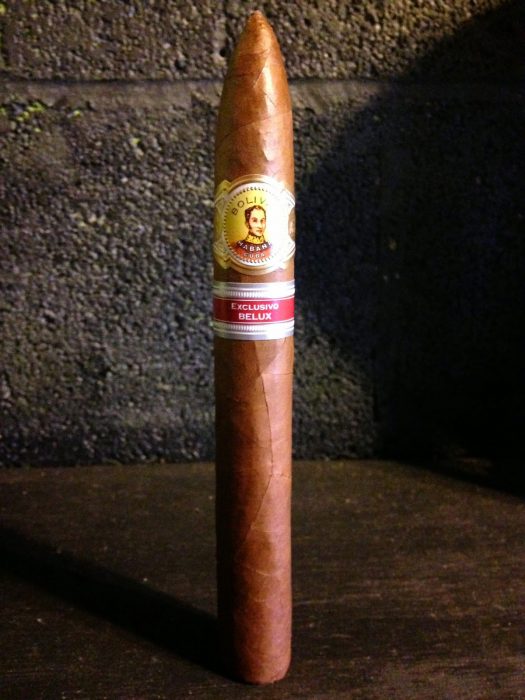 The Habanos for this review as provided to Habanos Critic by Sigarenhandel Piet van Kuyk for review. You can contact him here for purchases of this and other Habanos.