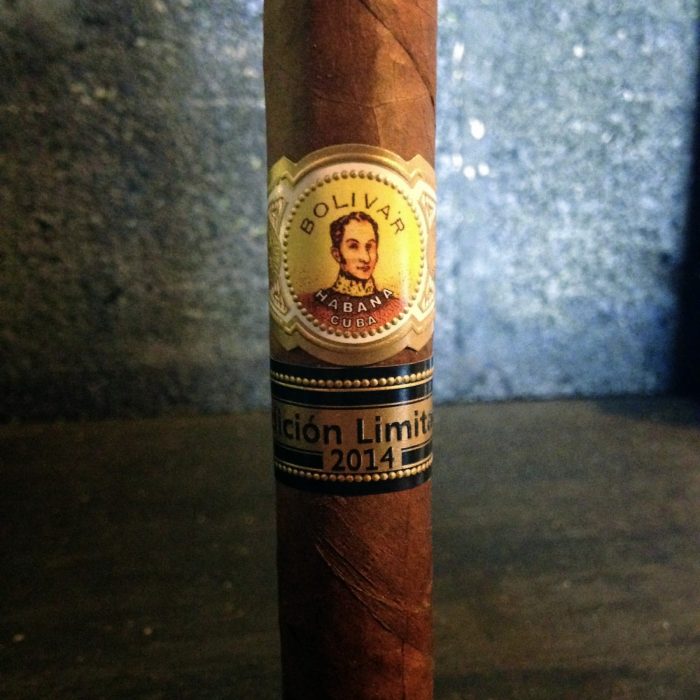 Bolívar is one of my personal favorite brands and I am crazy about almost every vitola they have in circulation. Whether is a Churchill or petit corona, the vitolas they have deliver the brands classic flavors, and they are flavors that I enjoy whether they are young or aged. Along with having great regular production offerings, it is a brand that is popular for regional releases. I enjoy the regional releases they have brought to the market, they are all solid blends that do the brand justice, but when it comes to limitadas, they are not so hot. They have had one limitada over the years, the 2009 Petit Belicosos, and to this day I believe it is one of the strongest and most unbalanced examples of the brand. Last year, Habanos S.A. announced that Bolívar would be making a return to the limitada lineup, and they would be one of the three 2014 limitada brands. I was eager to see how the release would be, and today I will see how the follow up is, compared with the disastrous 2009 release. Enough of this though, let’s take a look at the Bolívar Super Coronas Edición Limitada 2014.
Released in the later months of 2014, the Bolívar Super Coronas was of the three 2014 limitadas. It comes in 25 count Semi Boite wood boxes, and production numbers was not released. All tobacco in the blend is aged a minimum of two years, and is tobacco from Vuelta Abajo. The Super Coronas is not a new size, it has been used twice  before for another limitada and aniversario release, and it is a Hermosos No. 3 offering. It is a grand corona and measures 140mm (5.5″) with a 48 ring gauge. The Habano has a gorgeous wrapper, and the color is sublime. The triple cap is placed perfectly atop, and it is firm throughout. There are very few veins present throughout the Habano, and the ones present are quite small in size. I would say the wrapper is a perfect example of Colorado, and it is silky and oily in texture. There is an aroma of rich earth, cocoa, and tobacco on the foot, and the wrapper is giving off aromas of hay and leather. 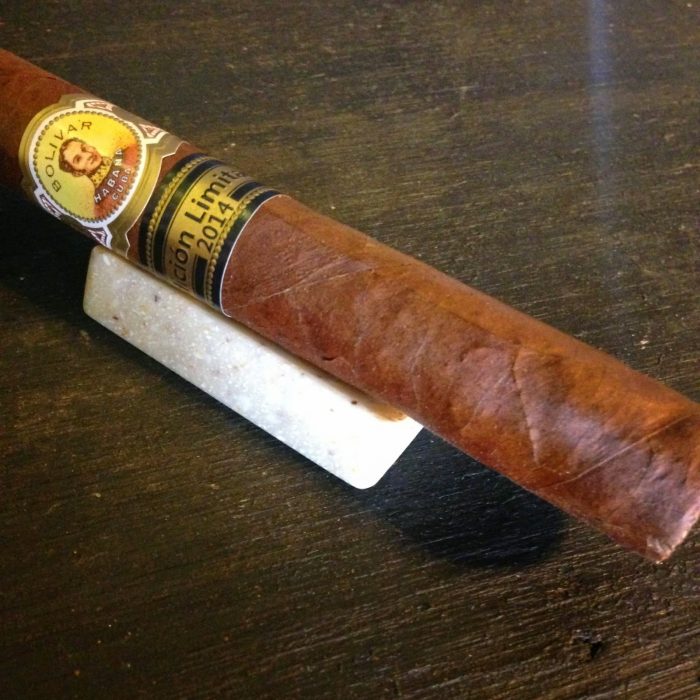 The first third opens up by showing some really enjoyable flavors, and I am picking up some chocolate, earth, and espresso bean notes. There are some barnyard qualities present as well, and it has a nice soft spice finish that has some licorice/anise qualities. I am getting faint hay like flavors also, and this is a nice first third. You can tell that it is a young Habano, and it shows some of the brands qualities, but it has some uniqueness with that. I would classify the first third as being medium to medium-full overall in terms of body, and the strength is at a similar level. I am finding that it is very smooth, and it is showing nice aging potential. The construction in the first third is decent, and it is showing a dark and thick burn line that is slightly uneven. The ash has a nice charcoal coloring on the end, and it is holding on firmly. There is a decent amount of smoke being produced with each draw, and it is a nice draw that is cool overall. 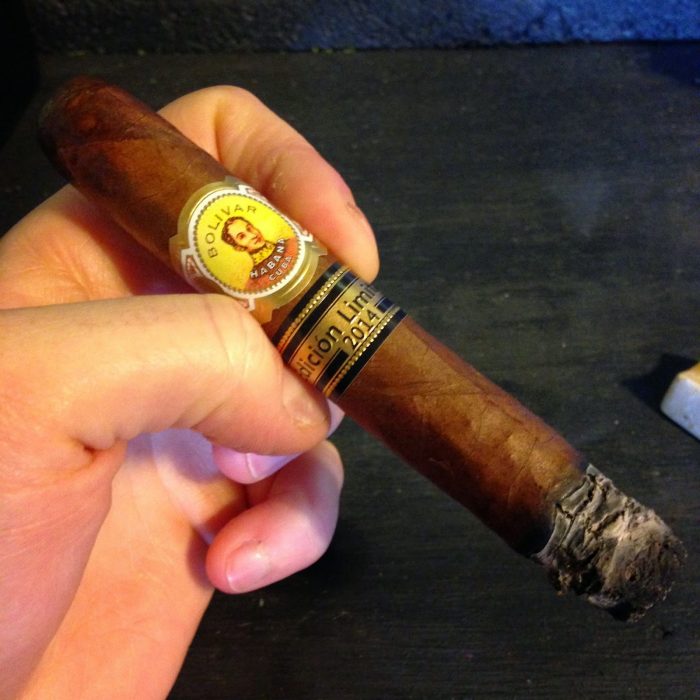 When I get into the second third of the Habano, I find that it begins to show richer flavors, and I am getting a nice milk chocolate and raisin flavor to balance out the espresso bean and barnyard flavors present in the first third. The spice notes are still fairly similar to that of the first third, and it has a nice pepper and anise like flavor on the finish. Overall, this is a nice smoke and the flavors delivered are enjoyable for the Habano being as young as it is. The construction is somewhat similar to what it was in the first third, but it has gotten a little worse as the Habano has progressed. It is an uneven burn line now, and the ash has taken on a dark charcoal coloring. The draw is still smooth and cool though, and I am getting a nice bit of smoke. I would say that the Habano is smoking at a medium-full level in this third for strength and body, and I look forward to seeing how it finishes. 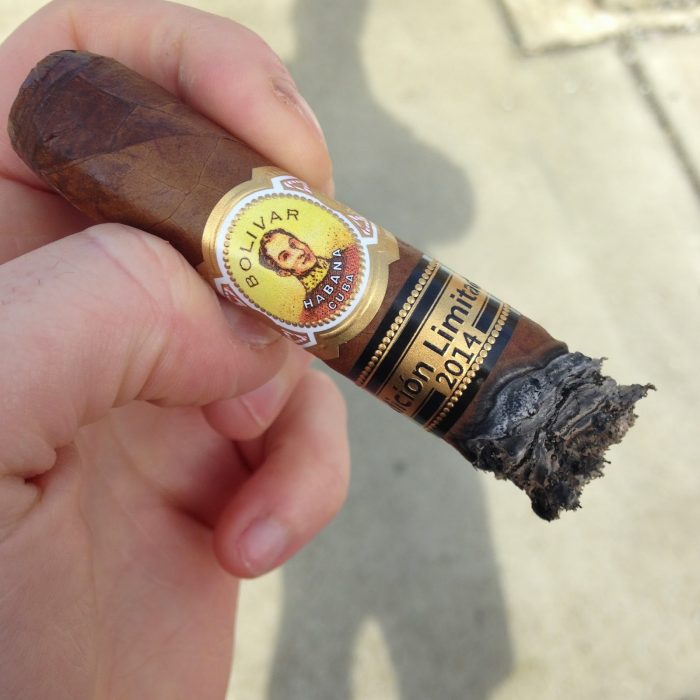 I am in the final third now and it is a somewhat disappointing third. The flavors have somewhat tapered off, and it is showing the youth now that I was expecting. It has a flavor profile of milk chocolate, tobacco, and raisins, and the Habano remains like this to the end. It is not a bad flavor profile, but I am looking for more and I believe more will be delivered in some years. The construction is similar to that of the second third and it is an uneven burn line and I have had to touch up the Habano from time to time. The ash is still that charcoal coloring and I really can’t let it remain on the smoke as I am having to touch up the Habano. I would say that the Habano finishes at a medium level for strength and body, and the final draw is cool and easy, showing those flavors from the final third. 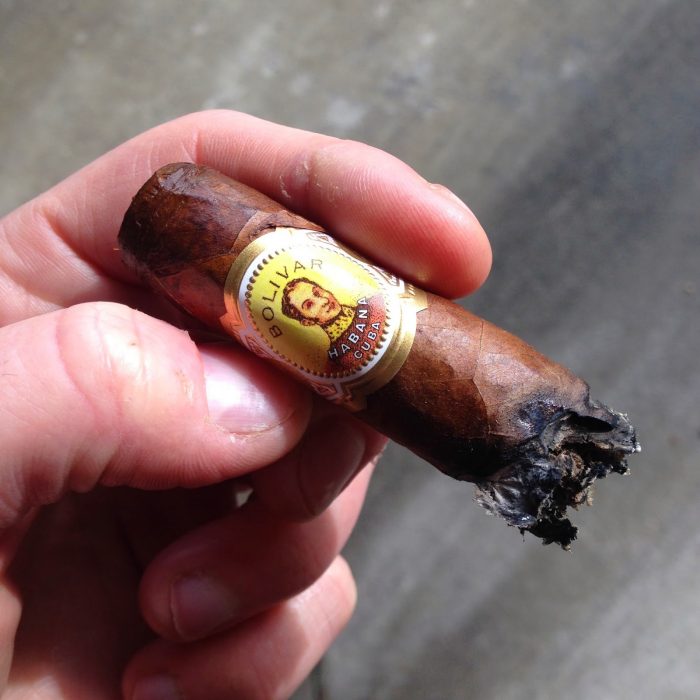 The Bolívar Super Coronas is a nice release, one that will be better in years, but not an awesome Limitada. I think the new Cohiba is fantastic, that is truly an amazing Limitada, but the Bolívar Super Coronas is not there yet. I do love the vitola offering, the Super Coronas is a size I can really connect with, but this particular Habano needs some age before it is really great. The flavors start out great and show promise, but after the second third it dies down some. The construction goes downhill a little as well, but it is a young Habano. More often than not, Habanos need a good bit of aging, and that is definitely the case with the Limitadas. I do believe that this particular Habano will be smoking great in four years, but in the meantime it needs to sit in the humidor and mature. Overall, I am giving it a young rating of 86-88, which a potential aged rating of 91-93. 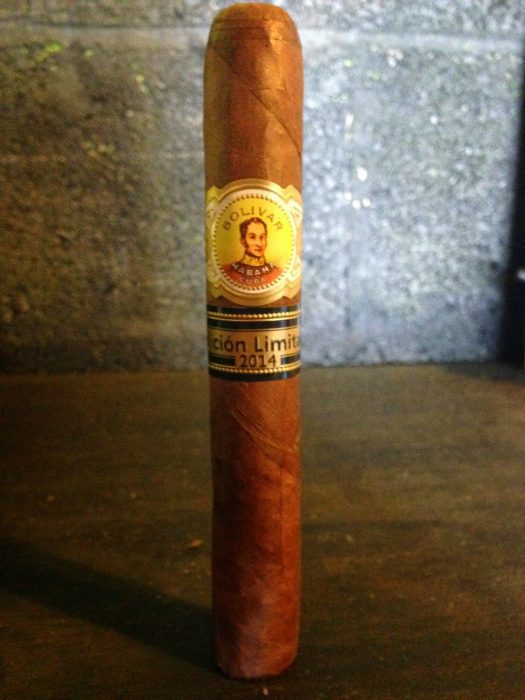