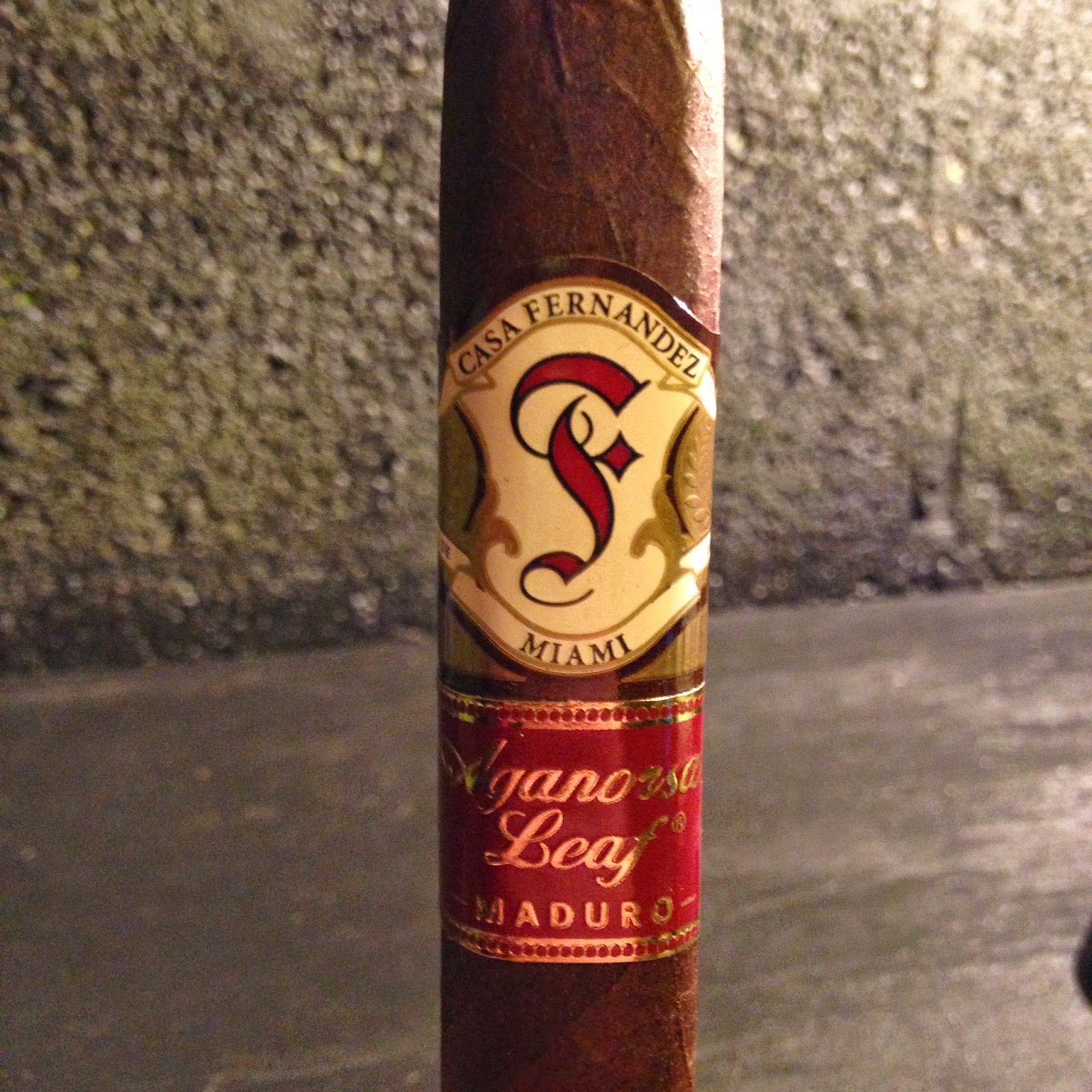 Released in 2012, the Aganorsa Leaf Maduro was a follow up line to the originally released Aganorsa Leaf line that was already on the market. That year the company actually released several maduro offerings, expanding beyond their corojo offering lines, and it was in 2012 that we saw Casa Fernandez take the next step to really increase their brand presence. Since then, the company has increased lines by adding vitolas and also adding some new limited editions to their portfolio. This year marked their second limited edition, a new line offering in the JFR brand and a vitola addition to the Aganorsa Leaf Maduro line that would be titled Délire. You could say the new vitola offering is the middle of the road offering for the line, and I believe it will be a vitola that is very successful because of the dimensions. The line has never been my favorite, I much prefer the Corojo offering, but today we look to see if the new vitola in this line offering speaks to me.

Titled Délire, this is the new vitola release for the Aganorsa Leaf Maduro line. The cigar measures 6 1/2″ with a 50 ring gauge, and it features a Mexican San Andres wrapper. The filler and binder are all Nicaraguan AGANORSA tobacco, and the cigar is made in Miami, Florida at Casa Fernandez Miami. The toro is pressed beautifully and it has a great maduro coloring. There are very few veins present with the cigar and it has a dark coloring that is familiar of a dark chocolate bar. There are very few veins present on the wrapper and it is very smooth in appearance. In forms of texture, the cigar is smooth as well, but it is not oily or silky, but rather slightly gritty to touch. There is an aroma of rich earth and manure on the wrapper, and I am getting some sweetness as well. It has an aroma of rich earth, tobacco, chocolate and nuts on the foot, and I am looking forward to smoking this cigar. 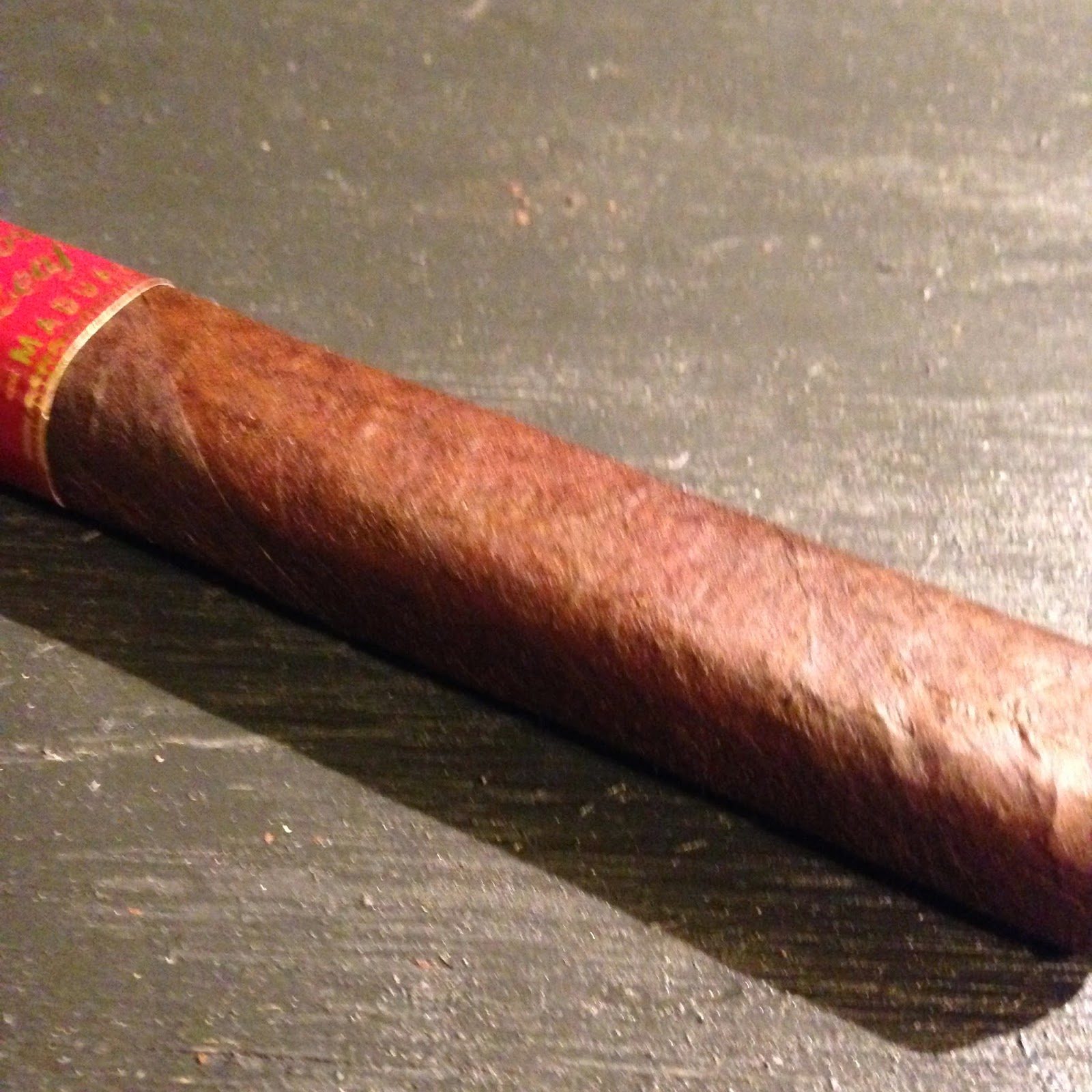 The first third opens up by showing some solid dark chocolate notes, and it is accompanied by some filling spices and rich earth qualities. I am picking up some toast nut qualities as well, and it has a solid leather and oak finish. It is rich and filling, but it is balanced by some stronger and dryer flavors that are great qualities to the blend. The flavors make it an afternoon or evening smoke for me, and the body and strength deliver the same aspects. I would say the body is between medium-full and full, and the strength is closer to medium-full overall. You are really getting those strong AGANORSA flavors with the sweet and rich Mexican San Andres flavors, and this is another solid release from Casa Fernandez. I am getting a nice burn line with the cigar, not perfect, but solid, and it shows a dark charcoal ash on the end of that. The draw is cool, great with the press, and it is giving off a nice bit of dark and thick smoke. 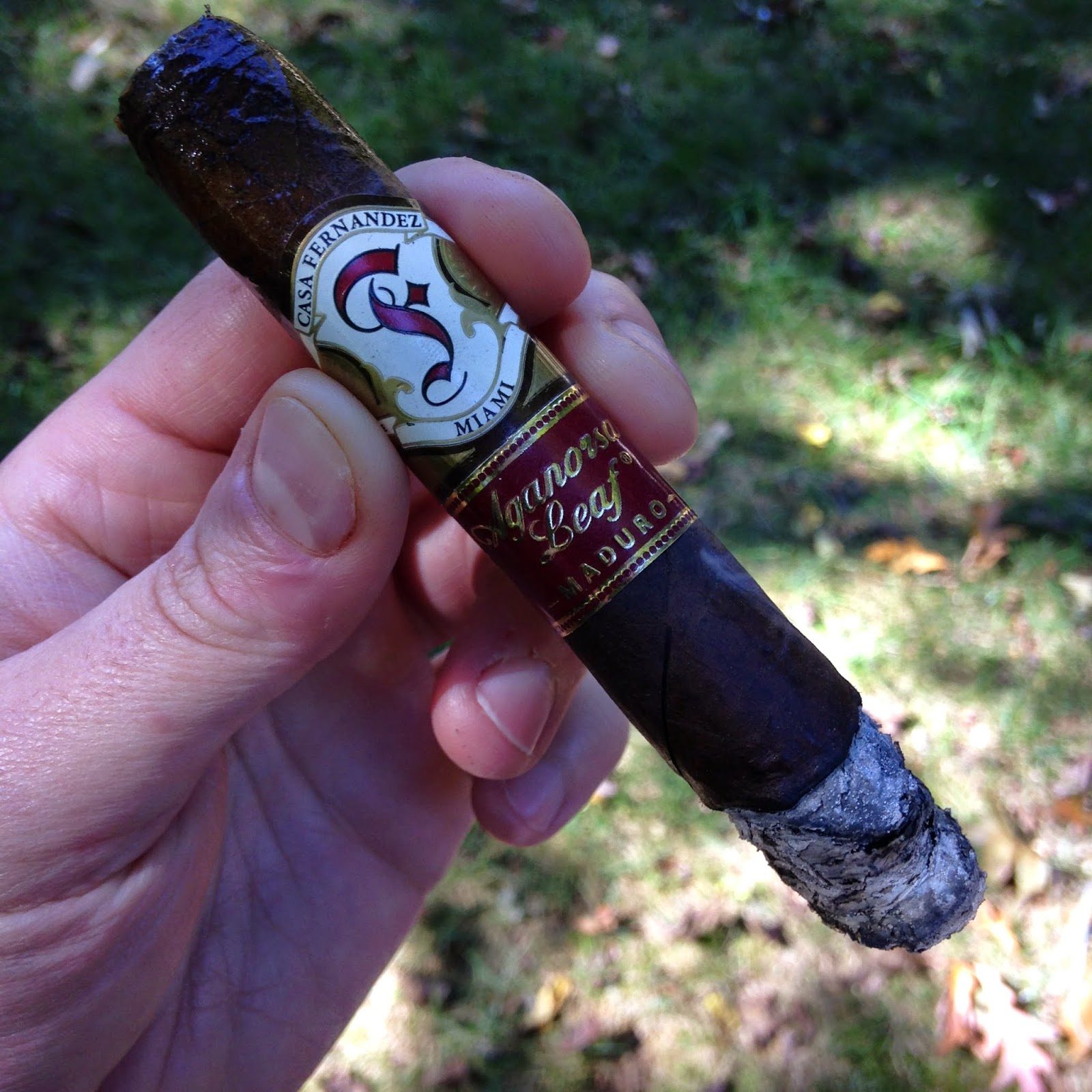 When I enter into the second third of the cigar I find that the flavors being delivered have become slightly stronger and it is keeping that richness with the blend. The toasted nut quality is very present in this third and it is now pairing with some dark coffee notes. It really has that black coffee flavor, and it is then showing some richness and sweetness overall. So far, the cigar is showing some nice transitioning in this third and it has great complexity. I would classify the cigar as being medium-full to full in body in this third, and the strength is at that medium-full level. It is remaining to be an afternoon or evening cigar, and it is a nice alternative to the Corojo Aganorsa Leaf version. The construction in this third is still performing well and it has an even burn line with that solid charcoal ash holding on at the end. The draw is cool, still producing tons of smoke, and it has a dark and flavorful finish. I am in the final third of the cigar now and it is showing more transitioning and growth in complexity the further I get into the blend. It is still showing those dark coffee notes from the second third, and it has some toast and nutty qualities present as well. The sweetness is gone, and the rich earth flavor profile is present but darker and stronger. There is a little bit of spice and pepper on the finish, and it has a very natural and dark finish. The construction is still great in this final third and it has an even burn line with that charcoal ash on the end. The draw is cool and flavorful, and it gives off a lot of dark smoke in this third. The body is at at full level in this third and the strength is there as well. It has grown since I first lit this cigar up an it finishes like a strong and flavorful Mexican wrapped cigar should finish. 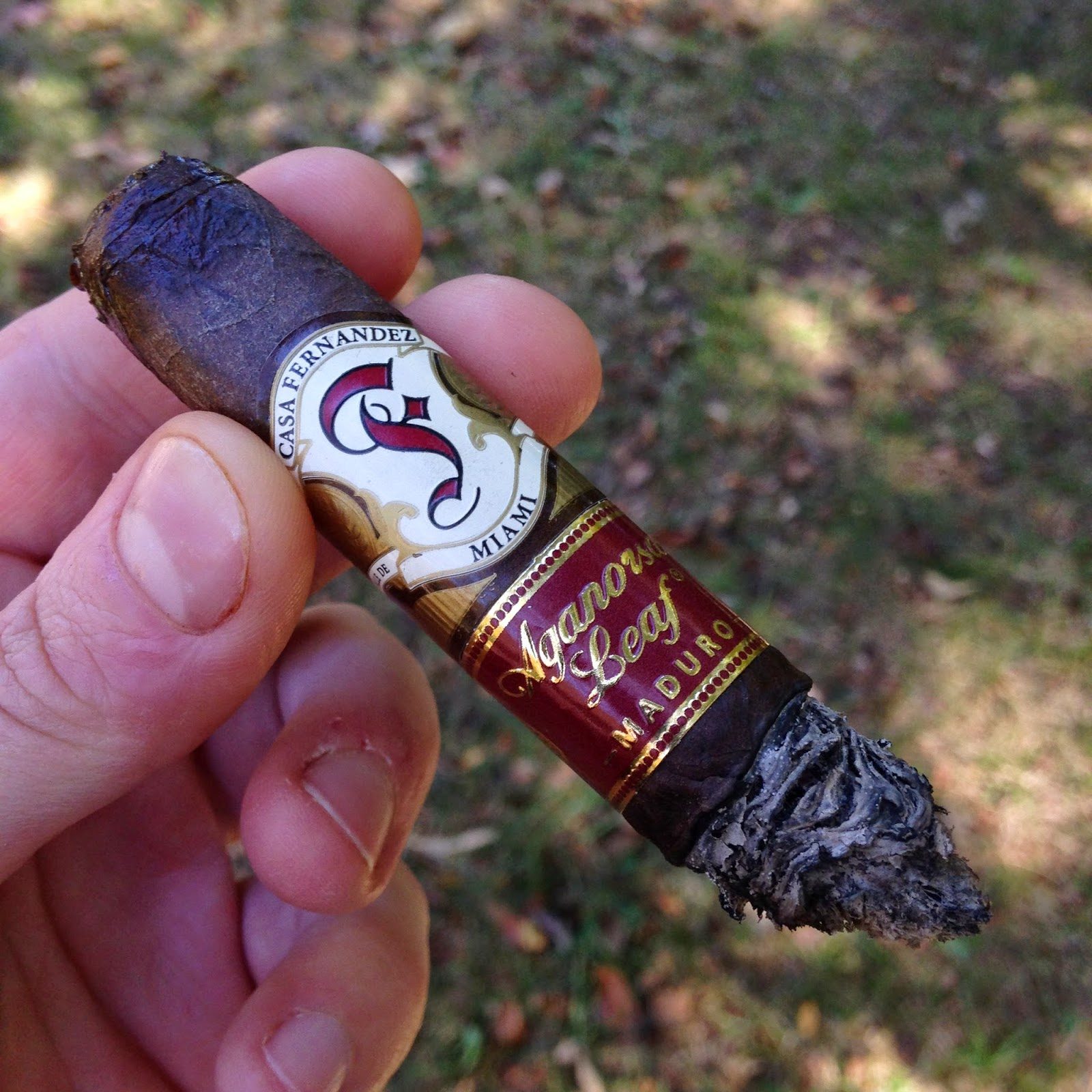 The Délire is a nice new offering to the Aganorsa Leaf Maduro line and it is my favorite release to date. It is a great size as a toro, and even though it is not overly large, it comes off as being a large cigar. For some reason, it reminds me of smoking a Cuban H. Upmann Magnum 50. It is not a large cigar, especially for the releases on the market currently, but it just seems huge. The Mexican wrapper produced some great flavors with the cigar and it did well with the Nicaraguan blend. I have said it in the past, Casa Fernandez is one of the few that does a good job with Mexican wrappers, and this is not any different. If you are looking for a balanced cigar that is rich and flavorful, this cigar is for you. The construction was fairly solid from beginning to end, and the amount of smoke being produced was great. If I had to choose this over the Corojo version, I would choose the Corojo version, it should be no surprise if you know me as a smoker, but overall this is my favorite Mexican San Andres wrapper in the Casa Fernandez brand. I am giving the toro a solid 91 rating and I look forward to smoking it again and even aging some. 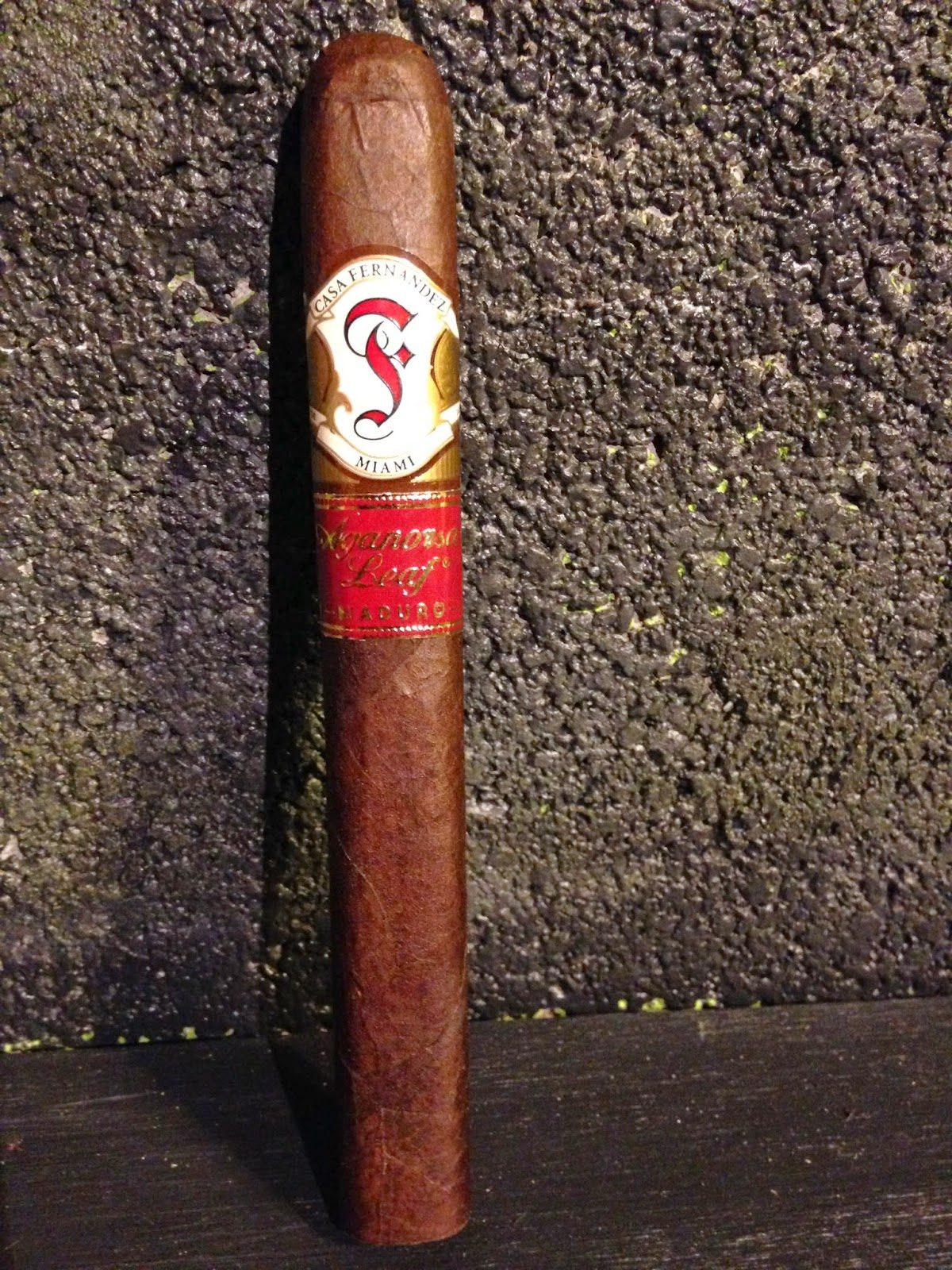 *cigars for this assessment were provided by Casa Fernandez