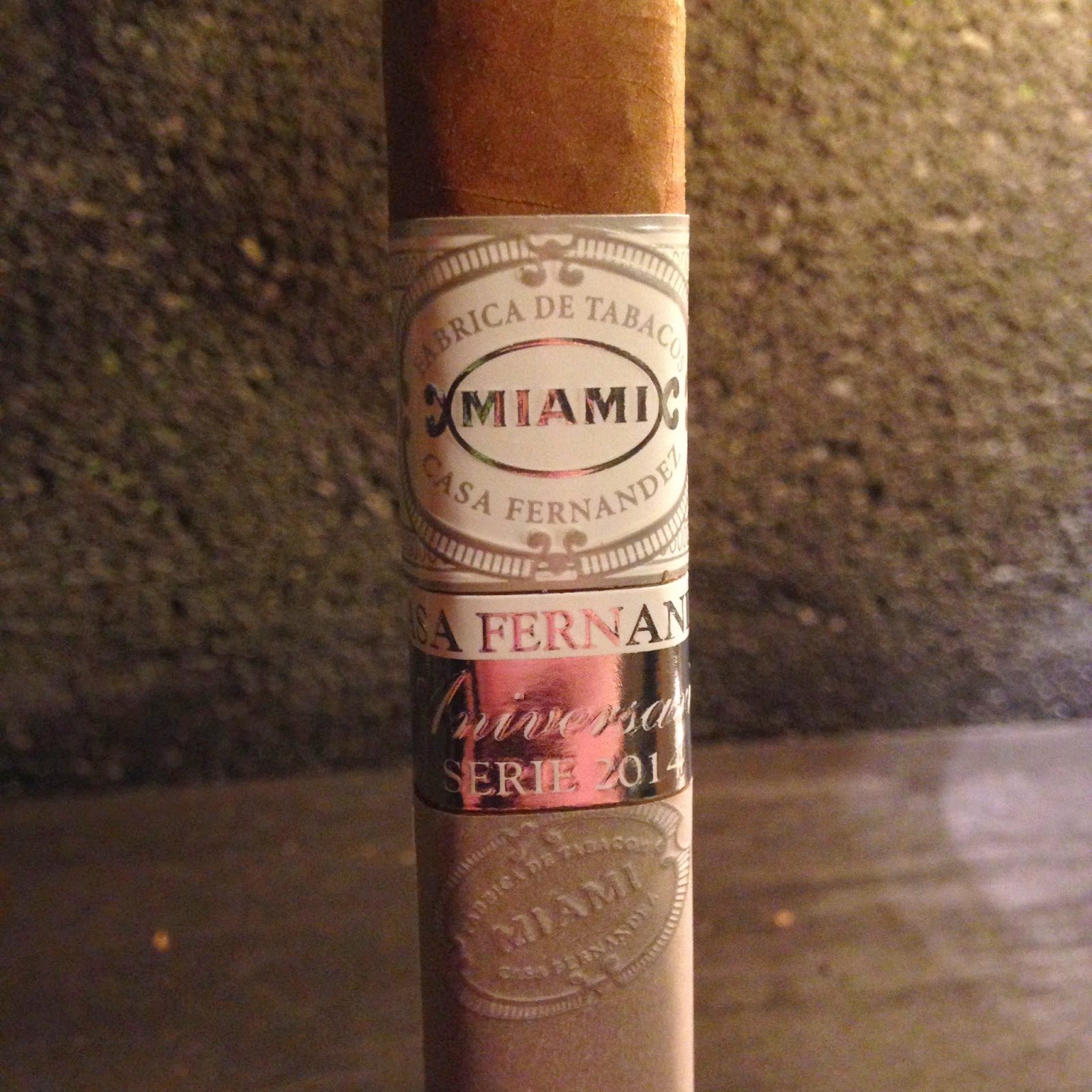 AGANORSA tobacco is tobacco that has impressed me for years now. I have thoroughly loved it and believe it to be some of the best tobacco coming out of Nicaragua. In recent years, the crops have been getting better and better in my opinion and the brands that have been using the tobacco have improved in the past couple years as well. They have shown the greatness of the tobacco with Corojo and Criollo seeds, and the use of the tobacco by companies such as Illusione, Dante, Viaje and others have resulted in great blends. Of course, I have loved the use of the tobacco by Casa Fernandez, the production side of AGANORSA as well, and they have put out some terrific blends for themselves and not just other companies. With cigars like the Casa Fernandez Lancero, AGANORSA Toro, Miami Reserva Toro and the Casa Fernandez Aniversario Bohème No. 35, the company has produced some true masterpieces. To follow up on cigars like this though, the company released the new Aniversario Serie 2014 The Ares this year and it was a cigar I was really looking forward to smoking.

The second release in the Aniversario Serie, The Ares was showcased at the 2014 IPCPR and made it’s way into retail stores late in the year. The cigar comes in a smaller toro format this year, and it measures 6 1/4″ with a 52 ring gauge. The cigar is a Nicaraguan puro composed of AGANORSA tobacco and the wrapper is Corojo seed. All tobacco is at least five years old before being placed in the blend, and that is from the filler to wrapper. The toro is nicely pressed and is finished with a lovely triple cap. The bands are very bold when compared with the mild wrapper and the white and silver play off the coloring well. The wrapper itself has a color that is a solid Natural in coloring and while it shows some hints of light Colorado in parts, there are other parts where it is more Claro like. There are few veins present in the wrapper and it has a texture that is silky to touch. The aroma at the foot is that of sweet tobacco, spices, nuts and fruit, and the wrapper has an aroma of earth, spices and leather. 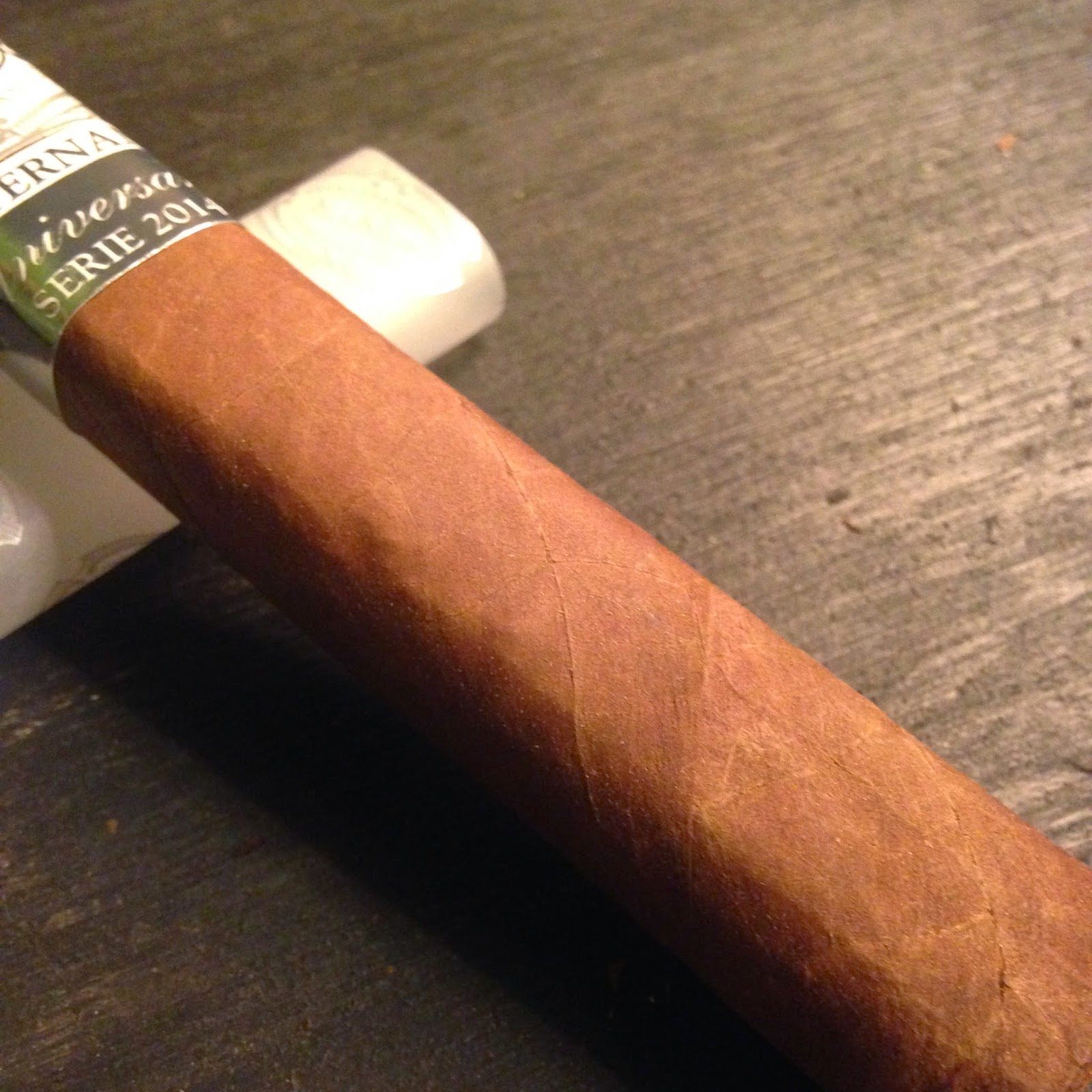 The cigar begins by showing some great spice notes. It has an Asian spice quality to it and while it has some pepper notes, it is showing a lot more cinnamon and nutmeg qualities. There is a nice sweetness present with that, a sweetness from tobacco notes, and it has a tobacco and woody quality after that. There are touches of almonds and earth present as well and this is a complex smoke. Compared with the 35th, this is a stronger cigar. I would say the strength is around the medium-full level and the body is right there as well. It is a late afternoon or evening cigar, and it shows the strength but also balance of Nicaraguan tobacco, especially Corojo tobacco. The construction is perfect with the cigar in the first third and it has an even burn line that is razor sharp with a light charcoal ash on the end. There is a perfect amount of smoke being delivered and with that is a cool draw that is showing all the flavors from the blend. 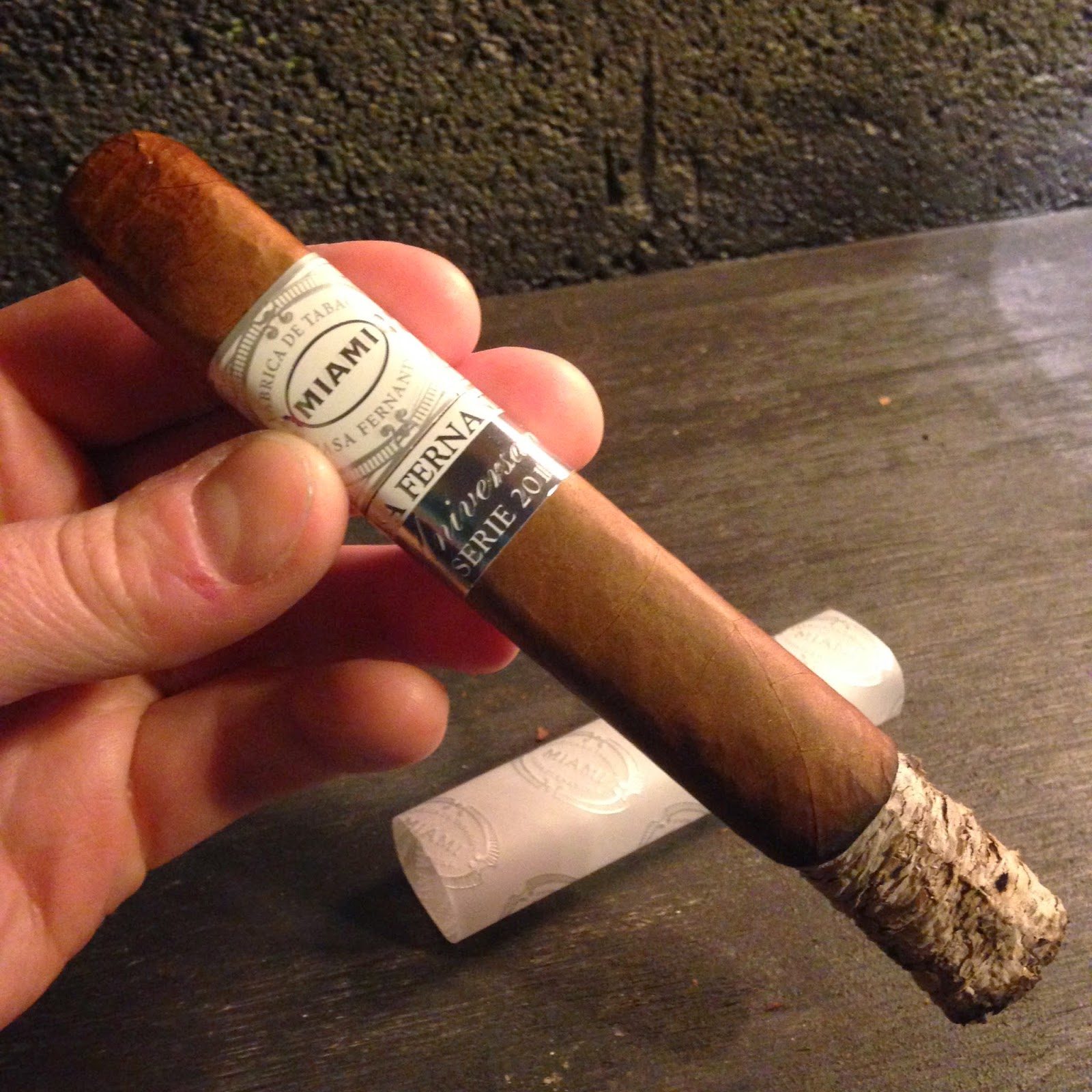 When I get into the second third of the cigar I am finding that the pepper notes are slightly stronger than they were before and the cigar overall is showing some nice spice notes with a focus on cinnamon and nutmegs. There are some tobacco notes present also, and it has a finish that is showing some characteristics that I pick up with Tripels. There is a nice almond finish to the cigar and a sweetness with that. The construction remains perfect in this second third and it has a razor sharp burn line with that charcoal ash on the end of the cigar. The draw is super smooth and cool and it is a cigar that shows its flavors from beginning to end. It is a young cigar still, needs some more time to age, but it is going to be fantastic in a couple months. It has a body and strength level that is right at that medium full level and it is a terrific afternoon and evening cigar in my opinion. 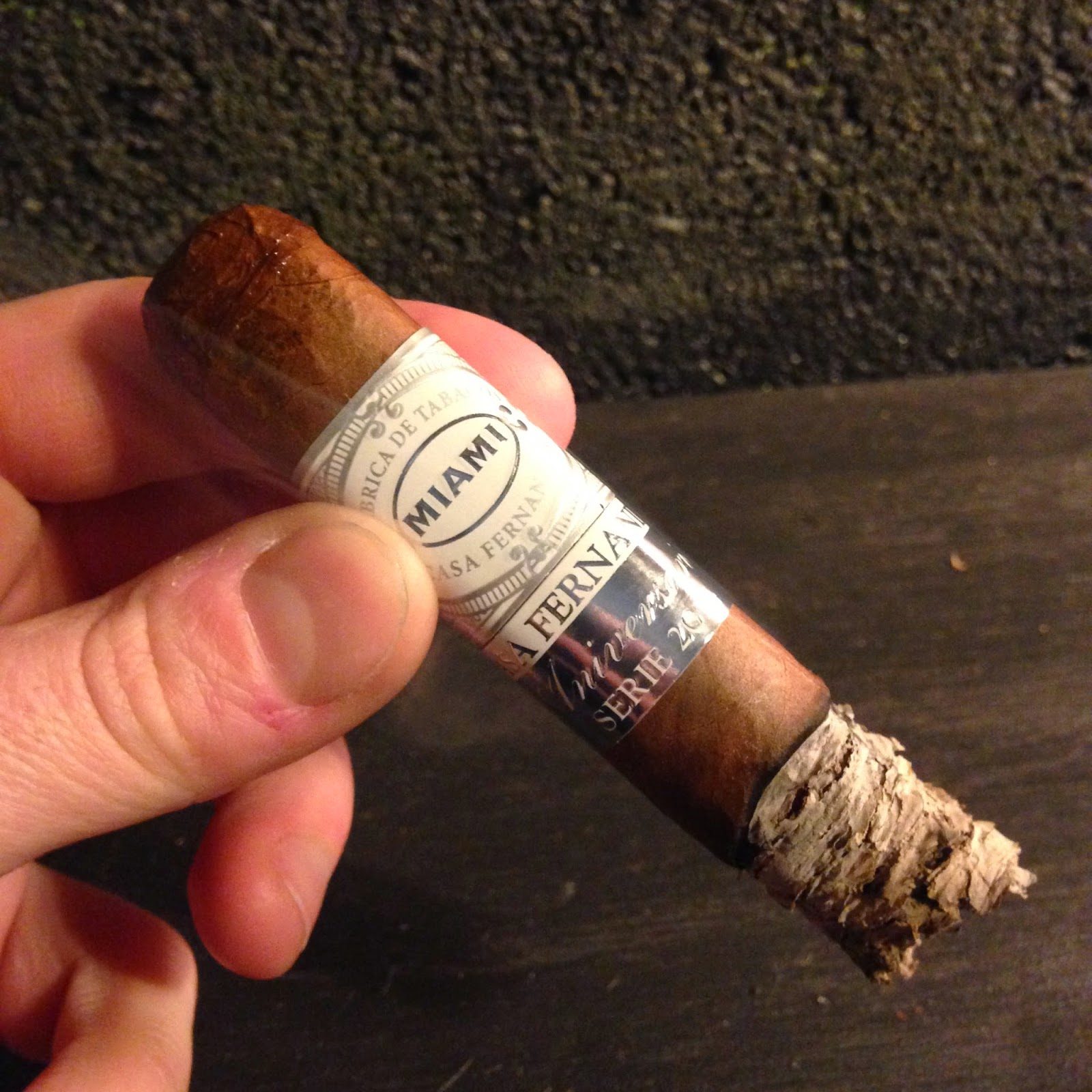 The final third finishes wonderfully and it shows some growth from the second third. It is still presenting those Tripel qualities, but it has some meaty and leather qualities with that. There are some nutty, cinnamon and pepper qualities present as well, and it has a sweet almond finish that has some aged tobacco flavors present as well. The flavors are really great and I know they will get much better. The construction is top notch in the final third, same as it has been throughout, and it is showing a razor sharp burn line with that lovely charcoal ash on the end of the cigar. It is holding on firmly and with that is a nice cool draw that gives off a great bit of smoke. The final third has a body and strength level right at that medium-full level and this is a cigar that when it is done makes me want to have another one right away. 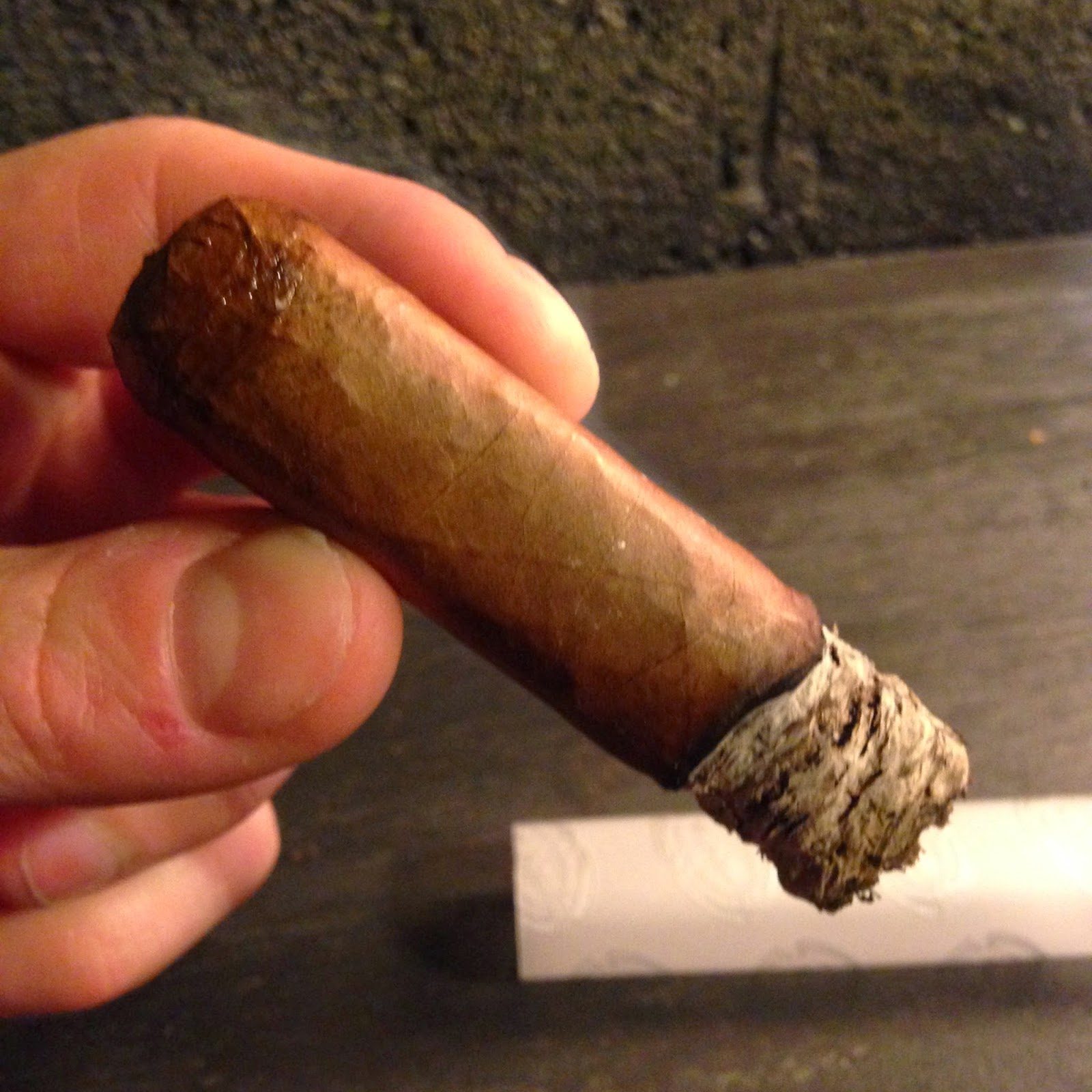 The Aniversario Serie 2014 is a very nice cigar and it is one that will get much better with age. It’s not that it is very young right now, it is still great, but it is a cigar that will get much better with age. It has a complex flavor profile that shows itself throughout the thirds, but with some months will become even better and more complex. The construction is perfect throughout the entire cigar and with that is a great draw that is cool and always showing the flavors of the cigar. I loved the body and strength of the cigar, it was perfect for a smoker like myself, and this was a great example of AGANORSA tobacco. I believe the 35th is a release that is more my cup of tea, a little bit less strength, but this is just as good and one of the best Casa Fernandez releases of all time. I think Casa Fernandez is growing some of the best tobacco in Nicaragua with AGANORSA right now, and I also believe that they are a company that is making some of the best cigars in Nicaragua and Miami, Florida. I love that these releases have been composed of only their tobacco and that the cigar is really paying tribute to their company and their company alone. I am giving the Aniversario Serie 2014 a 93 rating and look forward to my next one.
Seth’s Humidor Rating: 93 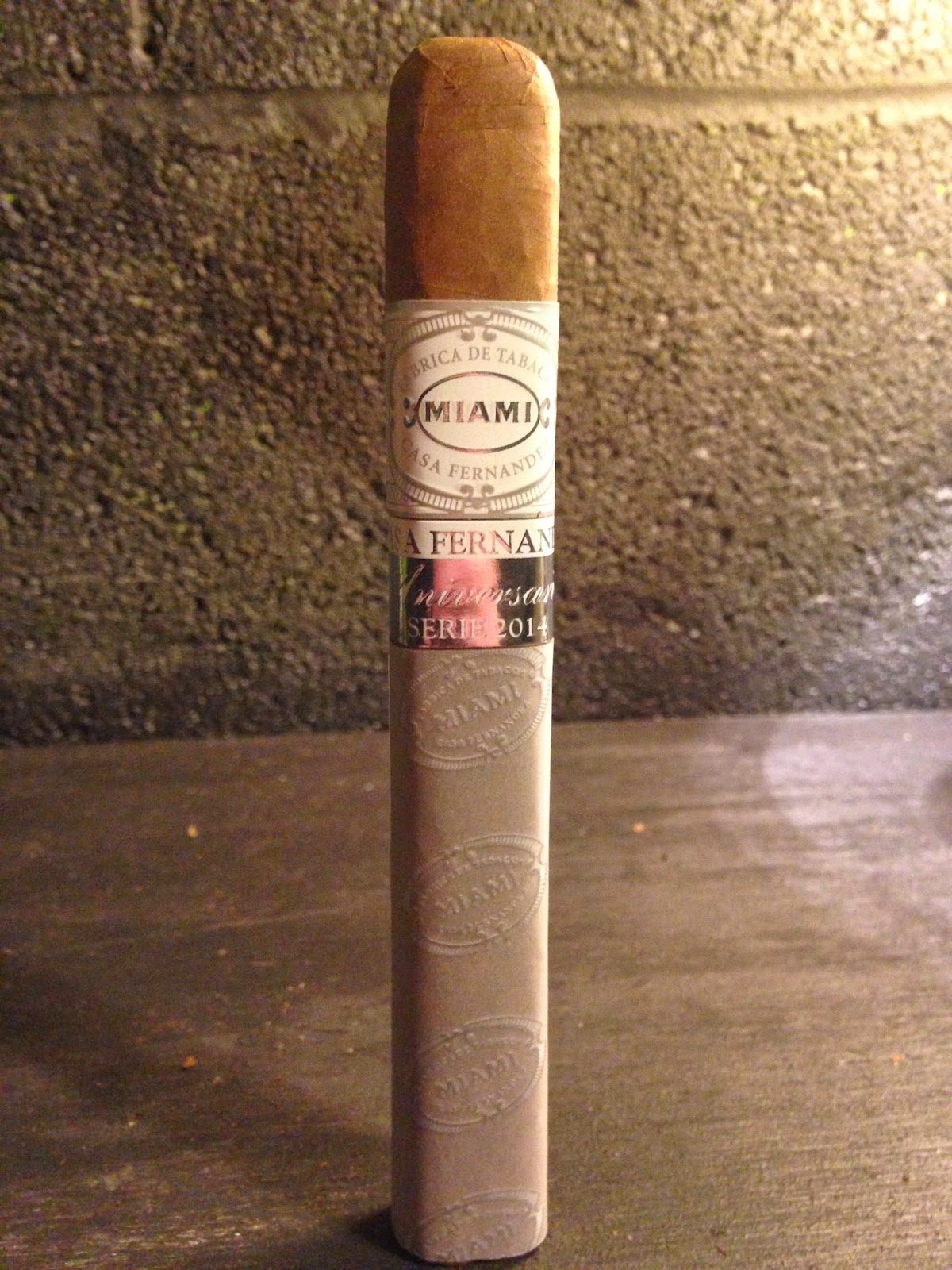