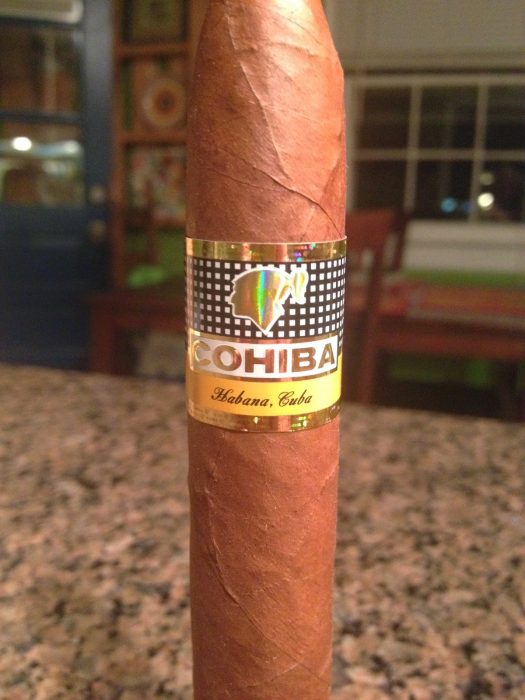 When Habanos S.A. released the Cohiba Piramides Extra at the Habanos Festival in 2012, it was the talk of the show. It was a huge year for Habanos if you ask me, because it was a year where they had some killer Edición Limitadas and an amazing Reserva release with that. The focus was probably not meant for the Piramides Extra entirely, but when you release a new Cohiba, you are going to draw a lot of attention away from other smokers. What really made it special was that this new release was the first regular production piramides that the Cohiba brand had. The flagship brand for all of these years never had a regular production piramides, and now when they did, it was larger than your typical piramides. The Habano was not meant to be affordable, that is not the case with any Cohiba, but it was pricier as it was in the price range of the Behikes. Adorned with a beautiful and new Cohiba band, this was a Habano that was meant to be the best in class.

As mentioned earlier, the Piramides Extra is a massive piramides and has a ring gauge of 54. This is the cutoff point if you ask me, in terms of large ring gauge Habanos, and with that was a length that was 160 mm (6.3″). All the tobacco comes from Vuelta Abajo and it is the best of the best tobacco with extra fermentation added to the tobacco. I should say that the blend is not that of the Behikes, and they do not use medio tiempo tobacco. I purchased these in a tubos three pack, and that was just introduced last year as these sticks typically come in ten count boxes. The Habano is a monstrous piramides and it is a beautiful one at that. There are some noticeable veins present throughout the dark Colorado wrapper, but the wrapper is smooth and wonderfully applied. I am getting some oils to touch with the Habano and the tapered head is perfect. The elegant Cohiba band really pops off of the Habano and it just screams the best of the best. The foot of the Habano shows an aroma of hay, soft spices, cedar, earth and subtle raisin notes, and the wrapper has some spicy, cedary and hay like qualities. 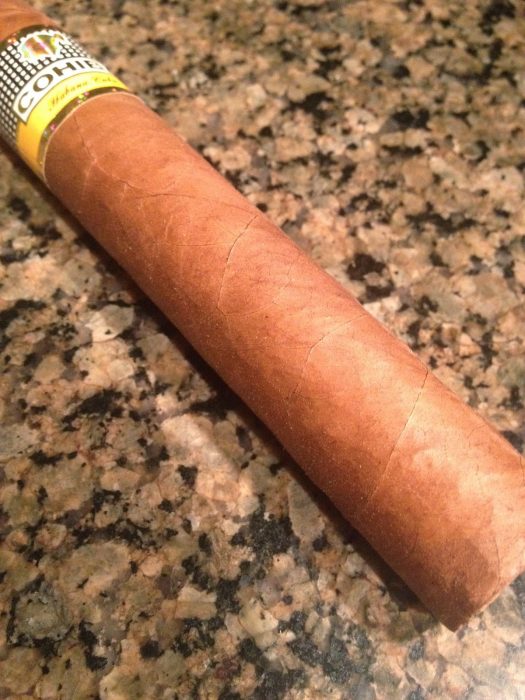 The first third opens up wonderfully and while this is a very young Cohiba, it is unique because of the ring gauge it possesses. There are some great earthy qualities and it has some awesome leather qualities present there as well. I am getting some toasty and nutty qualities present as well and it is enjoyable and flavorful. It is not as complex as I was hoping, but this is a young Habano and I see it aging very well. There are times when I really love the Cohiba brand, and right now this is a very different Cohiba than I have ever had before. Construction throughout the first third is quite solid and it is producing a nearly perfect burn line with a dark line and a firm charcoal colored ash. The ash is very firm on the end and the amount of smoke produced is terrific Right now I would say the strength and body are at a medium full level and it is a robusto smoke thus far. 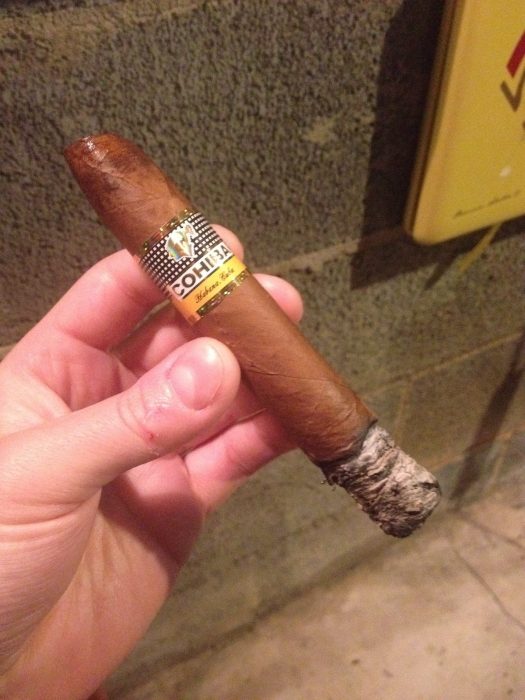 The second third shows some lighter qualities in terms of flavors and it has those great cedar notes with bits of leather and tobacco. There is no spice present with the cigar and I am not picking up any earthy qualities either. I would say the body is still up there, but the flavors are dryer and it makes the Habano smoke like no other Habano/Cohiba. It is a young smoke, there is no doubt about it, but it has the aging potential to do wonders. I would say the body of the smoke is right at that medium full level and the strength is smoking at a medium level. There is a nice bit of smoke being produced and this is a Habano that I would have in the evening to end the day with. In terms of construction the Habano is perfect and it is showing a nice even burn line with a solid dark charcoal ash on the end. There is a great bit of smoke being produced and it has a cool draw which is always important.

When I get into the final third of the Habano I find that the flavors being produced are fairly similar to that of the second third. It is showing some spices up front and it has some tobacco and leather notes following that. I am picking up some bits of earth and cedar as well, and it has a slight finish of hay and lemongrass. It begins to show those Cohiba flavors that everyone knows in the end, but it is very soft overall and it is then that I see where this Habano is going to go with some age. In terms of construction the Cohiba continues to show solid construction and it has a nearly perfect burn line with that charcoal ash holding on firmly to the end. The burn line is not terrific, but I think it will improve with age and the ash will as well. This is still a young Habano, and it still needs a lot of rest. In terms of strength and body, the Habano continues to smoke at a medium full level and it does all the way to the tapered head. The final draw is cool and it is producing some nice flavors. 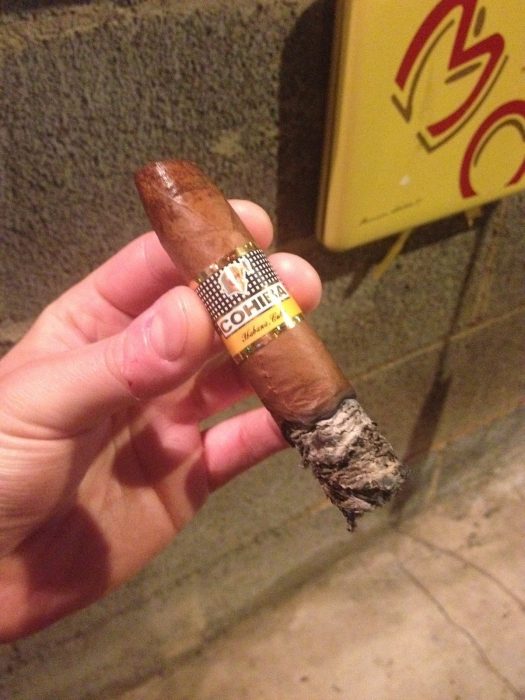 Did I love this Cohiba? No, I don’t love many Cohibas, but like most of them it needs a lot of aging time to really show its greatness. I think in five plus years this will be a terrific Habano and a wonderful Cohiba, but until that time comes it will not be something I reach for. I know a couple of guys who love this Habano, but they are smoking them when they are too young if you ask me. The Cohiba brand has always been know for being a brand that needs time and this is no exception. In terms of construction, it was damn near perfect, and this is a smoke for those special occasions. I would not say this is the best piramides by Habanos S.A., no where near their best, but it still an enjoyable smoke for those who like tapered ends. I think the flavor profile is one that will grow over time and also age very well with the smoke. If you ask me, this Habano is at an 87-89 right now and with some years behind it, it will be between a 92 and 94. Buy some, smoke a couple and age the rest. 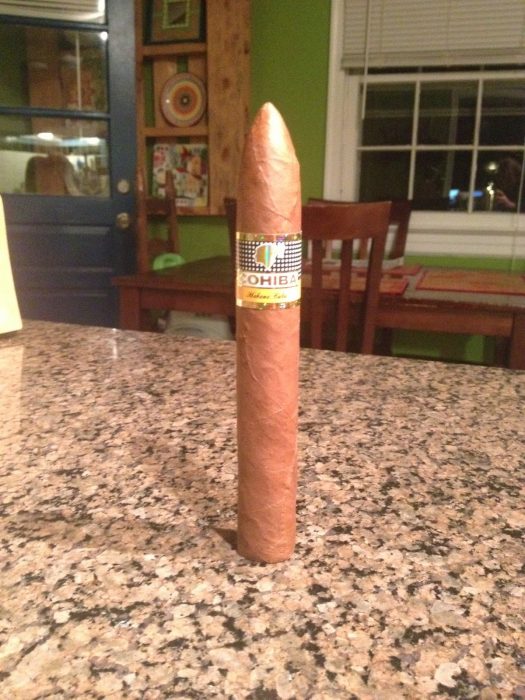