What is there to say except to say, Cohiba Robusto. This is the robusto of all robustos and the brand of all the brands. I have a tough relationship with the brand, and the same goes for Catfish. We are not ones to go crazy over the brand and I believe that comes with the fact that it needs to have some age on it. well, this particular robusto is from 2008 so let’s see what six years can do to the well known Habano, the Cohiba Robusto.

Released to the market in 1989, the Cohiba Robustos quickly became the most well known robustso on the market. It is a member of the Linea Clasica brand of the Cohiba brand, and is classified as being medium-full, stronger than the Linea 1492 Series. It is composed of all Vuelta Abajo tobacco and the filler and binder tobacco receive an extra fermentation stage that other brands do not receive. The Habano measures 124 mm (4.9″) and has a 50 ring gauge. The Habano sports a lovely triple cap and it is present on a wrapper that has a nice light Colorado coloring. It is a firm cigar and sports minor veins throughout. It is fairly smooth in texture and there are no oils present to touch. I would not say it is silky, but it is showing a very fine gritty texture. The aroma at the foot of the Habano is that of cedar, hay raisins and tobacco, and the wrapper is giving off an aroma of soft fruit qualities with some leather, cedar and hay. 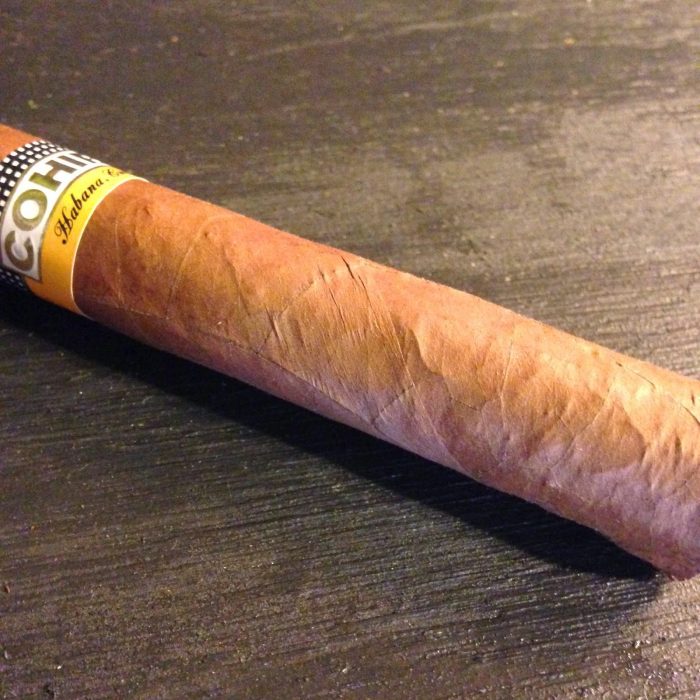 The first third begin by showing some great Cohiba flavors and I am picking up some creamy qualities with a nice bit of coffee and tobacco notes. There is a lovely lemongrass flavor as well, common with the Cohiba, and it has a smooth and woody finish that is very enjoyable. The five years of age have helped the flavors and made for a nice delivery. The construction is spot on in this third and it is showing an even burn line with a nice charcoal ash on the end. The ash is holding on very well, quite impressive actually, and I am getting a lot of smoke produced with each draw. It is a cool draw, very flavorful, and this is one of the best constructed Robustos I have had. In terms of body, I would say it is smoking around the medium-full level, and the strength is around a medium overall. This is how Cohiba Robustos should smoke. 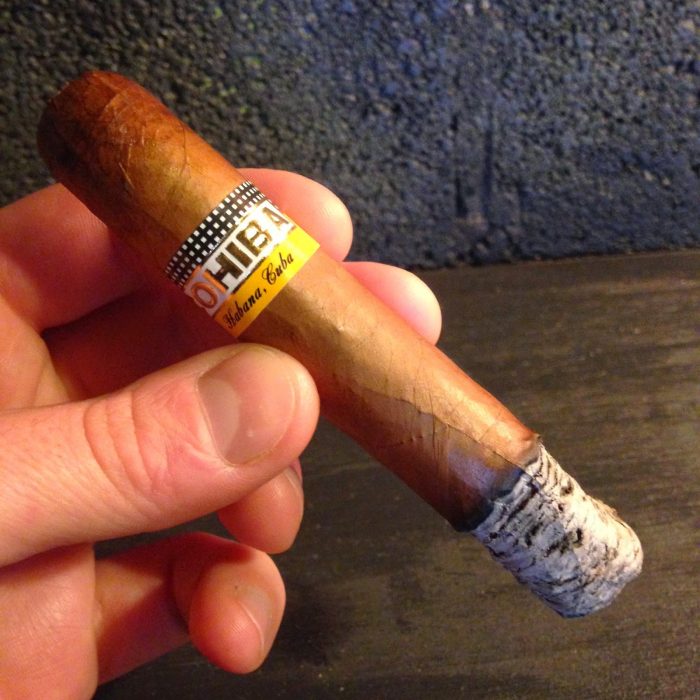 I am in the second third of the Habano now and it is improving greatly. The creaminess is still present and it is accompanied by some roasted coffee bean and cedar qualities. It has a lemongrass flavor as well, and it is finished with some tobacco, hay and soft nutty qualities. It is incredibly smooth and complex, and this is what people want in a great Cohiba. I don’t get this high quality version all the time, but when I do it smokes like this. The construction is absolutely terrific and it is showing that razor sharp burn line with a lovely charcoal ash holding on firmly at the end. The draw is cool and it is giving off a nice bit of smoke with that. I would still say that the Habano is smoking at a medium-full level in terms of body, and the strength is right at a medium. I am loving how everything is going, and I don’t want it to end. 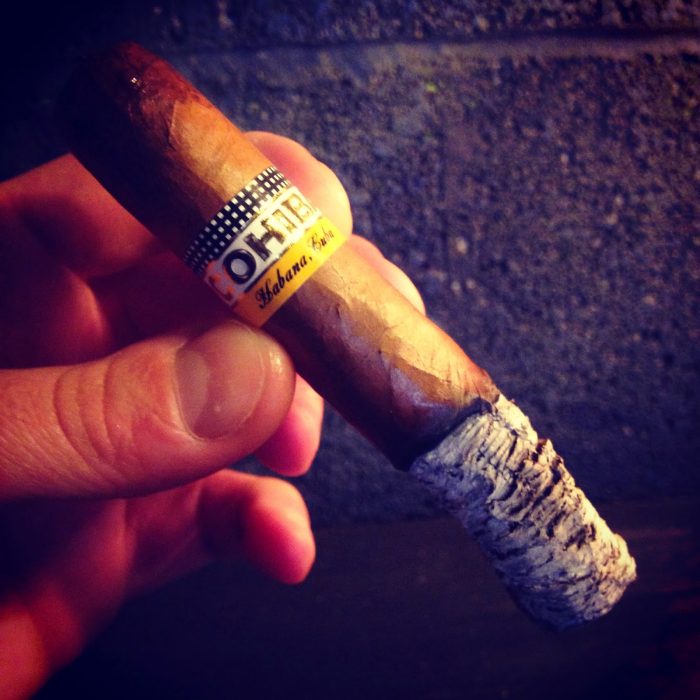 The final third provides a nice bit of closure to the Habano and it is showing those amazing Cohiba flavors. It is a little bit stronger in this third, something I am liking, and providing for some fuller bodied flavors. The coffee bean notes are much more pronounced and it is paired with some great nutty and toasty qualities. The lemongrass flavors are present as well, but are stronger and showing more lemony notes. It has a finish that is producing some definite tobacco notes, and the hay notes are a little bit harsher. The body and strength are both at a medium-full level now and this is typically where I prefer my Habano to smoke at. The construction is still terrific and it has that even burn line and charcoal ash that is holding firmly at the end. The final draw is cool and flavorful, and when it is done there is a long Cohiba finish. 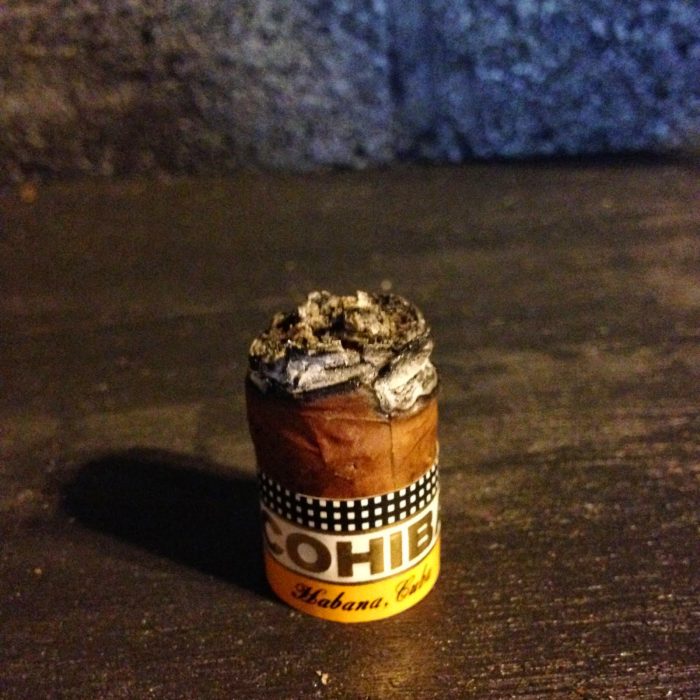 Is the Cohiba Robustos a great Habano? That is a tough question. When it is young it is not that great, it can be terrible, but with age it can become an incredible experience. This particular robusto had only been aging six years, but even after that period it got ten times better. I think if I had aged this ten plus year it would be simply phenomenal. I think the same goes for the Esplendido and the one Cohiba that is pretty good young in my opinion is the Siglo VI. Either way, this robusto showed incredible construction, terrific flavors and an abundance of depth and complexity throughout. I would smoke these all of the time if I could and had them around, but the truth is I put my time and money elsewhere. If you are going to buy the brand, which you should, but it with the understanding that it needs age and don’t smoke them. You will want to, but you need to let them mature. When young, I would give this particular Habano a rating between 85 and 87. With six years of aging, it is now at a level that is between 93 and 94. With some additional years, I can see this getting up to the 98 level. 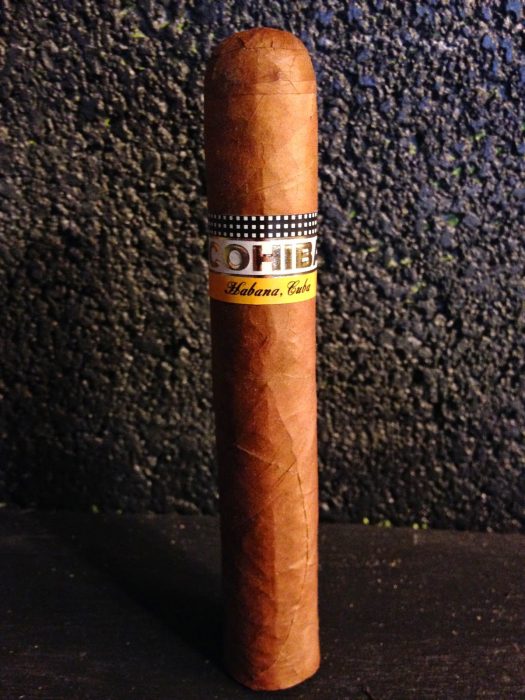