Bigger is better, and so goes the evolution of Cuban cigars into the world of large ring gauges, with the introduction of the Cohiba Robustos Supremos Edicion Limitada 2014. For the purpose of being objective, I will refrain from my opinion on larger ring gauge cigars, as in the end, a cigar is just a moment in time to sit down and relax. The beast in question measures in at a 58 ring gauge, and it seems to be an attention grabber in the United States, as interest has been very large thus far. Granted, I am just giving an opinion on the pulse of the online cigar community with regard to this release. 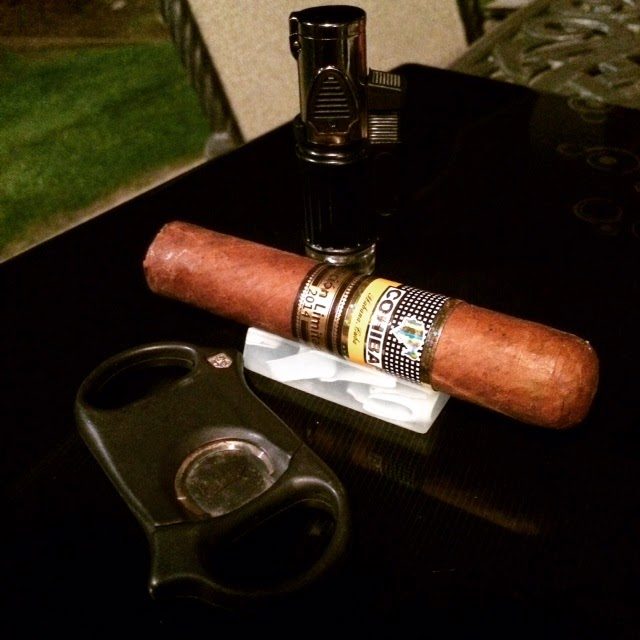 My experience in the past with the larger ring gauged Habanos, has been more power with less complexity, so my expectation going in was just that. The Wide Churchill vitola, the Montesco, is popping up all over the place in regional editions now, and I have not been impressed. The Cohiba Robustos Supremos is a Magnificos size, a robusto on steroids right at five inches. One has to wonder if the future of Habanos is larger rings, as the last few years have been dominated by gargantuan sized cigars. Given the recent shift in US policy towards Cuba, I think the folks at Altadis and Cubatobacco have been eyeing the US consumers for years now. In the meantime, the Regional push to larger rings suggest a worldwide shift in preference as well. On to the cigar, which spent about a week or so acclimating itself to my wineador and lower relative humidity. For the sake of objective reviewing, I have yet to read Tuna’s thoughts. 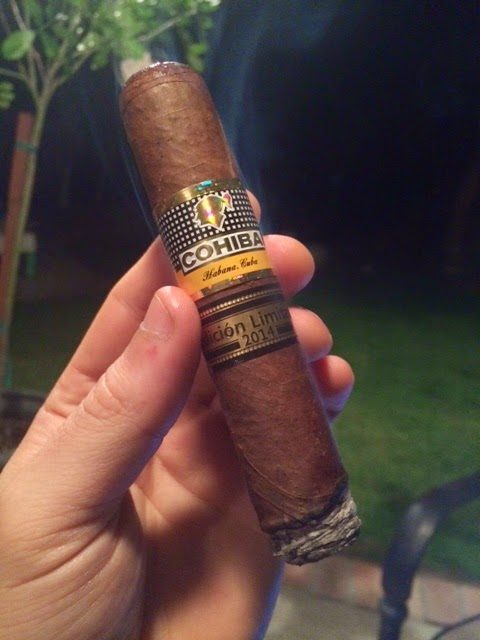 First Third: Sam Perkins, aka Big Smooth, hits a game winning three in the ’91 Finals against the Bulls. Yes, I am a Laker fanatic, and I was kind of hoping the Robustos Supremos would follow suit, and the introduction to my palate reminded me of Perkins’ unorthodox style. The finish was smooth, nice burn on the retro, and the damp earth was there, along with what I call Cohiba musk. The draw developed milk chocolate undertones, with some cedar hits as well. A dried raisin sweetness hit both the draw and the nose, adding a unique twist in complexity. I had heard this cigar was strong, and yes the finish was bold and in your face, but I had no palate burn at all. Right at the inch mark, complexity was all over the place with coffee notes, milk chocolate, raisin, sugar, cedar, and earth all hit the draw and retro to provide a little palate tennis, and tease this reviewer. 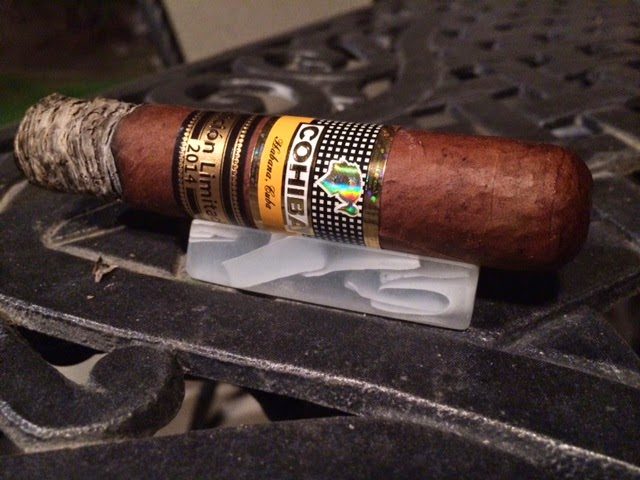 Second Third: The dried raisins had really kicked in by now, leaving a marked sweetness on the tip of my tongue. The retrohale had it as well, which to me stood out as the most unique flavor in the Robustos Surpremos. The body wavered, backed down significantly for me, even though the nicotine seemed strong, suggesting a modern blending style. A vanilla change took place at the halfway mark, signified by a smooth milky draw, with less raisin on the intake, and a long finish with sugar on the tongue. Roasted peanuts arrived late in the game, along with the musk flavors coming in and out. The second third saw serious changes take place, a sign of a good Habanos blend. 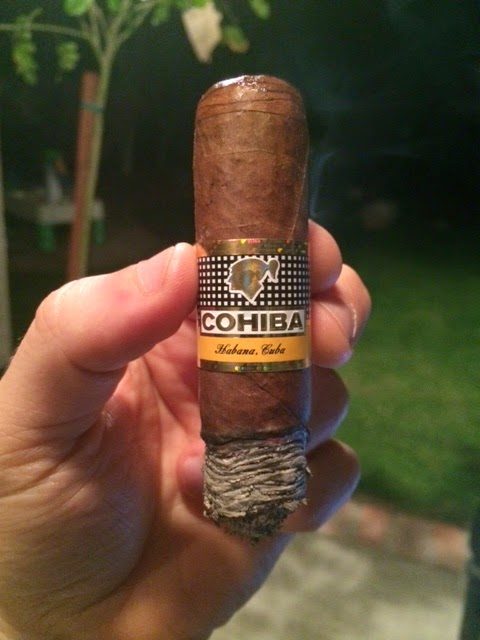 Final Third: The sweetness seemed to come back, as the raisins being the most dominant flavor throughout the entire cigar. The finish was a tad heavier, body as well, and my head felt the effects of the Robustos Supremos. The raisin notes had come back, mixed with brown sugar and musk, while the roasted nuts and some spice hit the retro hard and settled on the lips. You could feel the ligero and spice well after the draw on the lips as well, and the nub switched to full on brown sugar and musk for the finale. The draw and finish remained smooth, lingering well after the smoking experience. 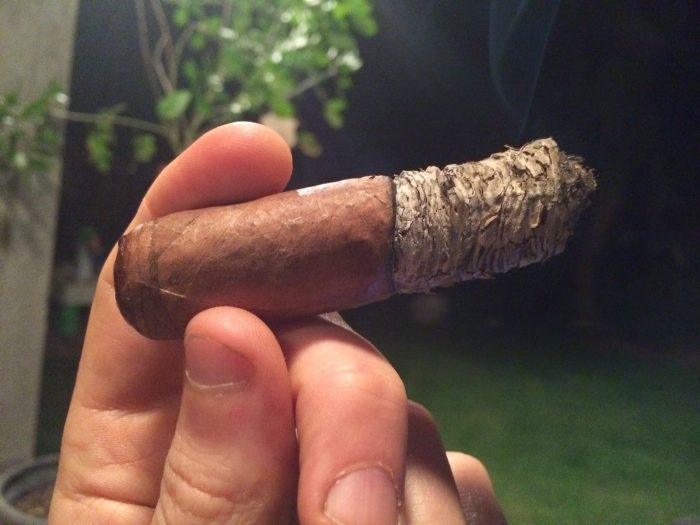 Construction: I had no issue, and must say I love the new Cohiba bands. Impressive burn for a large ring gauge. One thing to note, I punch all my cigars, and find that in larger ring gauges, it keeps the draw consistent in how flavor hits the palate. However, at times some larger ring gauges tend to tar up with a punch. That was not the case with the Robustos Supremos. 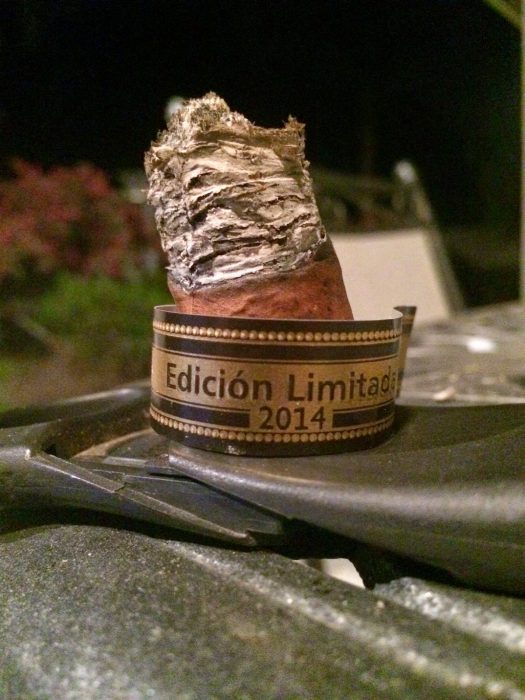 Final Thoughts: If you like big ring gauges, this is a cannot miss release. If you do not, this is the best large ring gauge release from Habanos SA I have smoked thus far in terms of complexity. The Cohiba Robustos Supremos marks a significant change in the blending ability of Habanos SA. The blend started strong, like a modern Non-Cuban cigar, then mellowed, then picked back up, all while maintaining complexity and finish without palate burn. In that regard, it will appeal to the palates of those smoking Non-Cuban cigars blended in such fashion, as well as those who seek a little more punch out of their cigar given the nicotine strength. I do think the aging potential is there, and the blend was much better than most Edicion Limitadas for my tastes. However, I cannot stand the size, and would not buy more based on that alone. My guess is this release will be huge, and do extremely well for Habanos SA worldwide. I look forward to comparing this release, to the other 2014 releases from Partagas and Bolivar in the coming weeks.