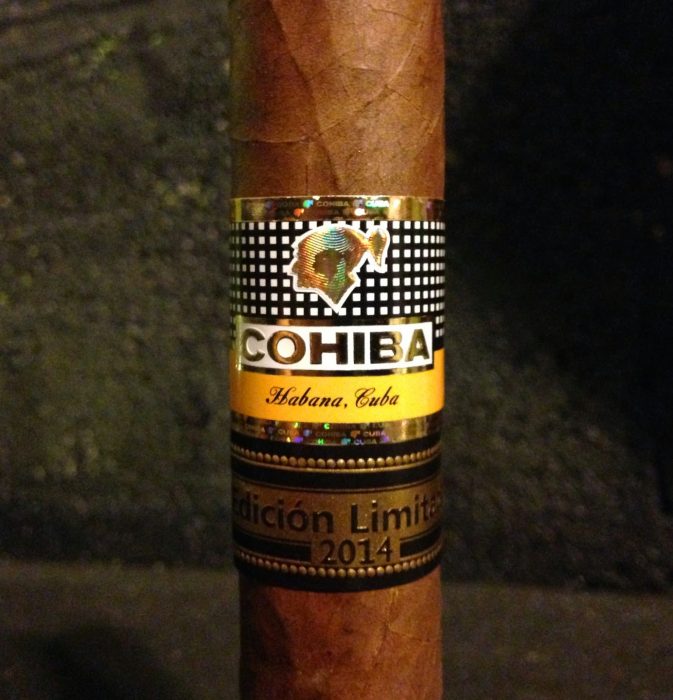 Catfish and I have taken our time in reviewing the 2014 Limitadas, but we knew that when we were to begin the reviews of them, there was only one limitada to begin with. Cohiba is the flagship brand of Habanos S.A., and it is a brand that has received much praise over the years. It has received its criticism as well, but more often than not, positive words fall upon the brand. It is a brand that is well known for its regular production vitolas, but it is with its limitadas that it really get the attention of aficionados around the world. The brand has had well known limitadas with the: Sublimes, Behikes, Gran Reserva Cosecha 2003, and Double Coronas, that is just naming a few, but today we look at the latest limitada, the Cohiba Robustos Supremos Edición Limitada 2014. Released last year with a Partagas and Bolivar as the 2014 limitadas, this was the main focus of the three. The Cohiba brand will always catch the spotlight, but what made this particular release so big was that this was the largest ring gauge to be released by Cubatabaco and Habanos S.A. to date.
The Cohiba Robustos Supremos comes in ten count boxes, and the boxes are slide lid, varnished boxes. There is a decorated Cohiba cedar lining above the internal limitada notice, and the notice states that- this particular Habano is the Robusto Supremos, it measures 127 mm (5.0″) with a 58 ring gauge, and is composed of tobacco that has been aged for at least two years. All the tobacco- the wrapper, filler and binder leaves, come from San Juan y Martinez *(D.O.P.) and San Luis *(D.O.P.) plantations, in Vuelta Abajo *(D.O.P.). Production is coming out of El Laguito, and no set number is released. The Habano is heavy in hand, and incredibly thick. The large ring gauge shows with this stout Cohiba, and it is very different than any thing I have ever seen. It has a dark wrapper, Colorado Maduro like, and is finished with a lovely triple cap. There are very few veins present throughout the entire Habano, and it is smooth in texture. The aroma at the foot is that of rich earth, chocolate, raisins, and spices, and the wrapper is showing an aroma of spices, hay, and wood. 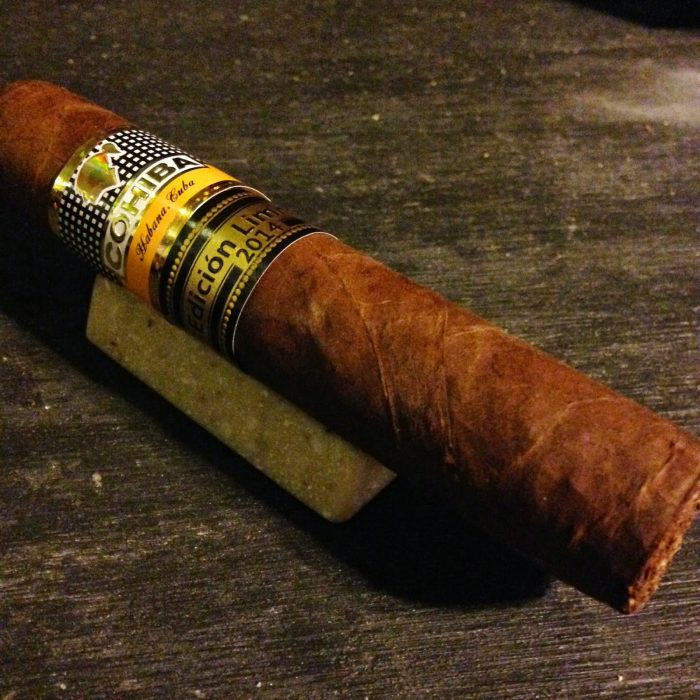 The first third opens up strong and it is showing strong tobacco and black pepper notes. There are some lemongrass qualities present with that, but overall, it is a subtle addition. I am picking up some oak with residual red wine notes, and it has some raisin, earthy, cocoa, nutty, and toasty qualities on top of that. It is a complex blend and there is a lot going on with this Habano. It is the best young Cohiba I have had, and in years the flavors will be out of this world. In terms of construction, it is smoking well and producing a decent burn line. There are some slight uneven points, but for the most part it is burning well and producing a solid burn line. There is a nice charcoal ash present on the end, and it is holding on firmly. The draw is cool with the larger ring gauge as well, and it is giving off a great bit of smoke. I would classify the Habano as medium-full in terms of strength, and the body is right there as well. 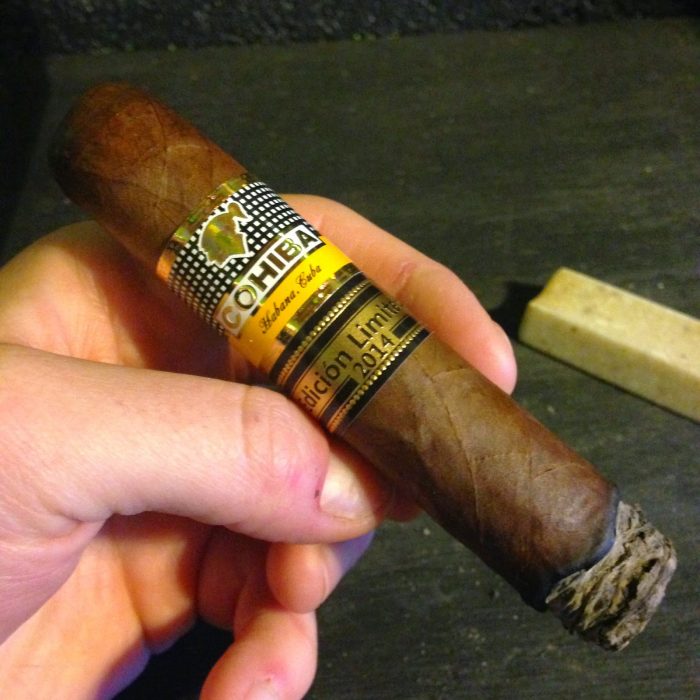 As I enter into the second third of the cigar I begin to see some transitioning to the flavor profile. There is a little bit of youth present in this third, but it does well with the blend. I am picking up black pepper notes overall, and it has that strong tobacco and earth flavor profile with that. There are some nutty and lemongrass flavors present as well, and it is showing toast and coffee qualities on the finish. Overall, a tremendous blend and I never thought I would really enjoy the 58 ring gauge offering to this level. The construction remains top notch in this third and it is showing an even burn line with a nice charcoal ash on the end. The ash is holding on firmly and there is a great deal of smoke being produced on each draw. I would classify the Habano as being medium-full to full in body in this third, and the same goes for the strength. 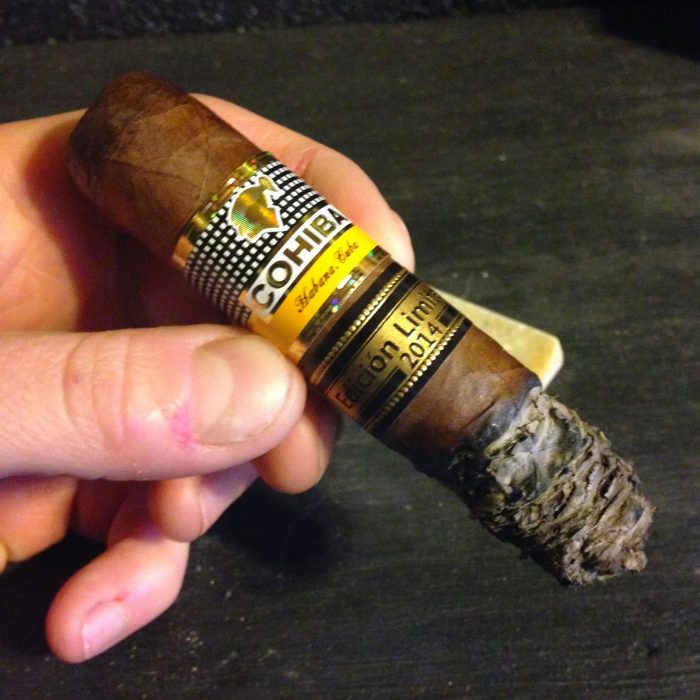 When I get into the final third of the Habano it begins to show some more transitioning and it is finishing young but well. There are those core pepper, earth, and tobacco notes that are dominant, but I am getting some lemongrass qualities as well. There is a return of the raisin notes from the first third, and it has a finish of cocoa and coffee. It is a strong final third, very full flavors, and it is showing all the great signs of a young Habano. The construction remains top notch in the final third and the large ring gauge smoke is producing a nice burn line with that dark charcoal ash on the end. The draw is cool and smooth, producing a lot of smoke, and the final draw has a nice lemongrass flavor. I would classify the final third as being medium-full to full in terms of body, and the strength is now on the full side of the spectrum. 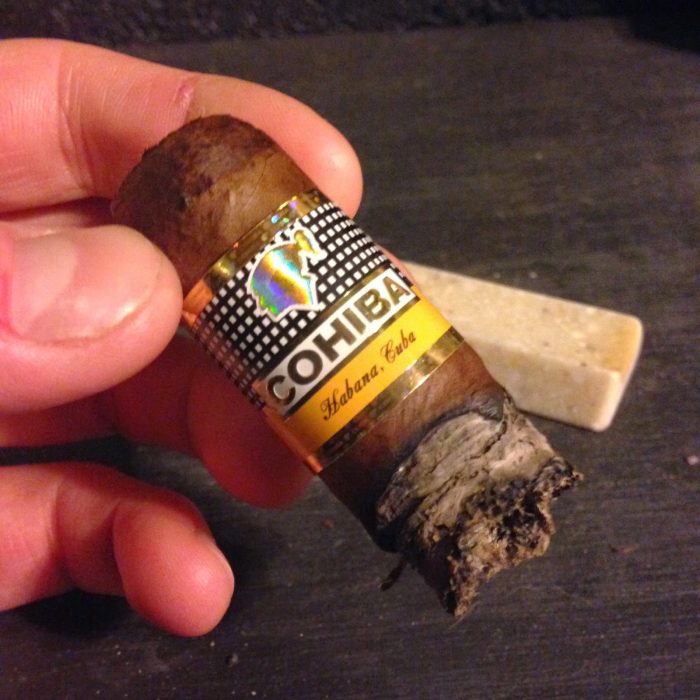 This is simply the best young Cohiba I have ever had. Along with that, this is the best large ring gauge offering that Habanos S.A. has released. It is a strong Habano, no doubt about that, but that is the trend with this year’s limitadas. I was skeptical of what Habanos S.A. was thinking and doing when they announced this new Cohiba, but after smoking the final product, I have found that I was without a doubt, in the wrong. This will be magnificent in years to come, and will age well for many years. The flavors delivered were tremendous, and the first third was showing where the Habano will be in time, showing raisin, cocoa, and coffee flavors. The construction was terrific as well, and this was a well rolled and firm Habano. I have always questioned why Habanos S.A. was getting into larger ring gauge offerings, but after smoking their offerings I have found they know what they are doing with larger ring gauges. I had heard nothing but good things about this Habano, and I could not agree more with what those individuals said. The Robustos Supremos is strong in body and strength, but flavorful with that, and in a couple years it will be very balanced. I am giving the Habano a young rating between 91 and 93, and with age it will be between 95 and 97. 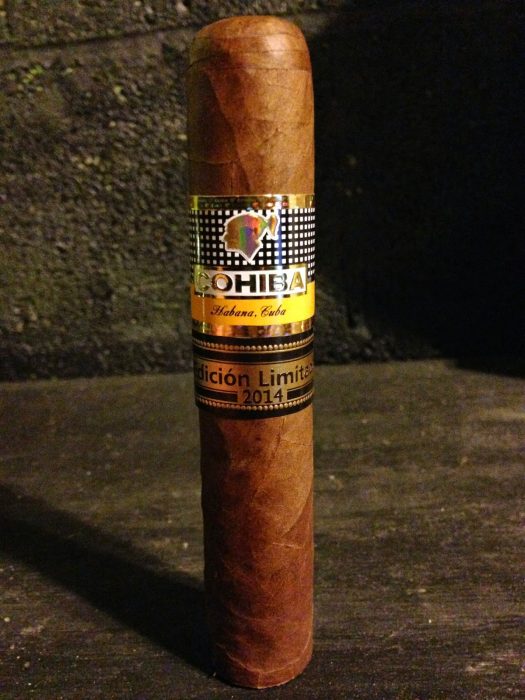