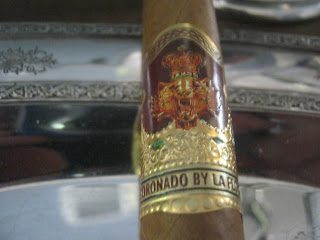 It was between the years of 1540 and 1542 that Francisco Vásquez de Coronado set out from Mexico in search of the city of Cíbola. You may know that city as “The Golden City,” and that is how it was described to Coronado by the Friar Marcos de Niza. “The city stood on a high hill and was made of gold, and when he looked off to the west he saw the Pacific Ocean.” When he was told of the city the year was 1539, and for the next year he prepared for the expedition. As it turned out, the expedition was a total failure and Cíbola was never found, but the legend is still alive to this day and is talked about in National Treasure 2 and Coronado himself is mentioned in the Indiana Jones film The Last Crusade. With all of that being said, Coronado’s name is often mentioned when discussing The City of Gold, and it is fitting that it is the name of Litto’s La Flor line that bears a band rich in gold and jewels.

The Coronado line by La Flor Dominicana was introduced in 2006, and was the first line by La Flor to ever use a Habano Sun-grown wrapper from Nicaragua. Litto predominantly uses Dominican tobacco with Dominican or Connecticut Shade/Broadleaf wrappers on his cigars, but from time to time he leaves that comfort zone for something special. The Coronado line is one of my favorite lines by Litto and La Flor Dominican, and I think it is his most complex and possibly flavorful line. I have enjoyed all the vitolas in the line, even the exclusive Lancero vitola, and today I am going to be enjoying the vitola that is possibly my favorite size as a cigar in general.

The Coronado Corona Especial is the smallest vitola in the standard Corona line, and because of this you really get to taste the wrapper flavors. As I said before, the wrapper is a Habano Sun-grown leaf from Nicaragua, and it features a Dominican Corojo binder with filler tobacco being all Dominican Sumatra and Piloto Cuban seed. The measurement is your standard corona gorda, and measures 5 ¾” with a 47 ring gauge. The cigar is firm in hand, and it has a beautiful wrapper that is slightly toothy, and almost vein free. The coloring is that of a light Colorado, and it almost has this sand paper coloring to it. It is silky to touch, and has an aroma of hay wood, spice and damp earth.

As I light up the cigar I get those complex flavors from the get go, and I can pick up all the qualities from the tobacco the cigar has in it. There are some light spices on the forefront and finish of the cigar, and I am also getting some cedar and coffee notes. Along with the wood, coffee and spice notes, I am getting some subtle stone fruit flavors and they are of plums and cherries. It’s really a great cigar any time of day, and I find myself smoking them at the beginning and end of the day quite often. I would say the strength of the cigar is slightly above medium for me, maybe more, but because of the flavors it is balanced out. The cigar burns wonderfully throughout and it offers an ash that has the coloring of light gray and light brown as well.

In the second third of the cigar I begin to get some cocoa notes in addition to those dominant flavors in the first third, and it is really adding to the complexity of the cigar. The cocoa notes are pairing predominantly with the coffee and stone fruit notes, and it is accompanied by this Cayenne and other spice flavors from the first third. There are still those wood flavors throughout, and it is on the finish that I get this woody cherry flavor. It is still burning wonderfully through this third, and I am holding on to the ash from the initial light as well. The coloring is still of that light gray and brown, and the strength of the cigar as well has remained at that medium body level.

Wrapping up the cigar in the final third, I find that the flavor profile remains fairly similar to that of the first and second third, and it is ending quite pleasantly. Those cocoa flavors have remained with the coffee from throughout, and it is more of a café mocha flavor profile right now. The stone fruit is still present, and it is balancing out the spices and the cedar flavors as well. The cigar is still smoking at a solid medium level in terms of strength, and it is because of the strength that I find this is a perfect cigar any time of day. The ash has remained the same coloring as it has throughout, and the burn line is as perfect as it was when I first lit the cigar. As I smoke down to the nub, the last draw is just as flavorful and cool as it was from the beginning.

This was a fantastic corona gorda, and I really enjoyed the flavor profile and strength to the cigar. These are cigars that I find are perfect for back to back smokes and an everyday cigar. I feel that they are the best line in production by La Flor Dominicana, and I feel that way because they are very balanced and flavorful. Sometimes the smokes by Litto are just too strong and lack flavor, but this cigar is not like that at all. While I enjoy the Double Corona vitola in this line as well, the size of the Corona Especial offers me the chance to enjoy the line and be able to do so in a shorter period of time. When I purchase this line I typically grab the Double Corona and Corona Especial vitolas, and those are the two sizes I would recommend to those who have not enjoyed the line yet. I know some the massive 7” by 60 ring Corona Gorda vitola in the line, but that is too big for me. Worthy of 92 points, this is a cigar that all must try.