We are a time in the industry where we are seeing some of the best cigars ever on the market. We are seeing these released from the largest of manufacturers to the smallest of manufacturers. We are also seeing great cigars being made for retailers exclusively, and with that we are seeing the retailers getting involved in the process. The amount of knowledge right now in the industry is incredible, and you can really see that with the finished projects. We are seeing a lot of these retailer exclusive cigars being made in honor of their 5th, 10th, and even higher anniversary, and they are teaming up with some great manufacturers for these smokes. Today we will be talking about a cigar that is honoring the 5th Anniversary of Cuenca Cigars in Hollywood, Florida.

Cuenca Cigars has been around for five years and to honor that anniversary they launched the Cuenca 5 Anniversary. The cigar is a little different than most retail exclusive cigar because in all reality it is not going to be a retail exclusive smoke. While the smoke is made with the name of the retail store in which they are coming from, it is not going to be sold only in their store. The team behind this project is Miguel and Ana Cuenca, and since they have close ties with A.J. Fernadnez, it was obvious who they would team up with to produce the cigar. They worked on the blend with five seasoned smokers of their store to create the the perfect smoke, and this was the final product.

The cigar comes in a single vitola, a massive 7″ by 54 ring gauge torpedo, and is box-pressed. The tobacco blend for the cigar is not disclosed entirely, but it does come wrapped in a gorgeous Nicaraguan Habano Oscuro wrapper. I imagine the blend in the fillers is consists of some Nicaraguan tobacco, but since it is blended by A.J. Fernandez, there is a chance that it has Honduran, Dominican, and other countries/regions in as well. Initial production of this cigar is limited to 500 boxes, but future production will have more boxes released and also new sizes. Boxes consists of ten cigars. The wrapper to the smoke is silky and smooth to touch, and I am not picking up any major veins on the wrapper. It is slightly firm to touch, and I am picking up aromas of cayenne, black pepper, cedar and lovely bits of cherries and chocolate. 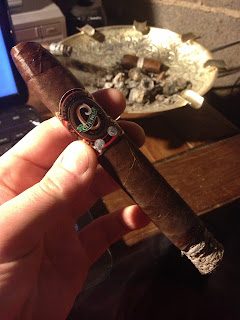 Lighting up the cigar I am greeted by some great Nicaraguan flavor profiles. I am getting some lovely spice notes, bits of pepper and cayenne with some cinnamon and cloves, and I am also getting some definite cedar, coffee, cocoa and earthy notes. There are bits of cherries here and there as well, and it is a very flavorful and complex smoke. The construction on the cigar is stellar, and I am getting a razor sharp burn line with a light gray ash that is near white in coloring. It is holding on firmly to the smoke, and the draw being produced is cool and showing a lot of smoke. I would say the cigar is at a solid medium full level for the most part, but it is a smoke that I could enjoy anytime of day. 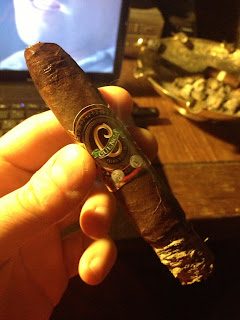 When I get into the second third of the cigar the construction of the smoke is still phenomenal, and I am still getting that even burn line with a beautiful light charcoal, near white coloring, ash. The flavors are so complex and enjoyable, and I am picking up some toast, nut qualities, cedar notes and bits of cocoa and coffee too. There are some great cherry notes to the cigar still, and the complex Asian spice flavors are still present as well. The strength level of the cigar is still at that medium full level, and it is a great smoke in all areas of concern. The draw is still cool and producing tons of smoke, and I love that this cigar is in a box press offering. What sells this cigar to me is that it is box pressed. 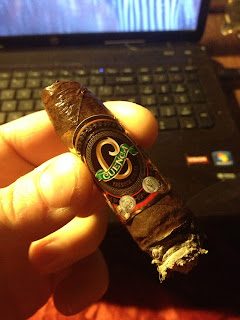 In the final third the cigar is finishing wonderfully, and this is a great smoke. The construction has been top notch throughout, and the final third is no exception. I am getting a razor sharp burn line all the way to the tapered nub, and it is still producing that lovely light gray ash. The draw is cool all the way to the end, and what a terrific smoke in that sense. The strength is remaining at a medium full level throughout, and I think it is a great any time of day cigar for me and others could possibly see it the same way or an evening smoke. The flavors are what makes this cigar really great, and to the end I am getting lots of cocoa, coffee and cherry notes. There is a little bit more stone fruit flavor profile present in the end, and it makes it even better. It it is finishing with those cedar and Asian spice notes as well, and the last draw is just as flavorful as the first. This cigar blew me away. I did not go into the cigar thinking it would be poor, but I am going to be honest in saying that I did not think it would be this great. It had an amazing complexity level, and the flavors were so enjoyable. Construction was top notch from beginning to end, and it produced a beautiful light gray ash that held on to the cigar wonderfully. There was a nice amount of smoke produced with each draw, and it was a cool smoke from the beginning to end. This was a massive torpedo, and while it was not my preferred size, I do love that it was offered in a box pressed format. This was simply a terrific blend, and a blend that many will enjoy. I give this smoke a solid 92.

*Cigars for this assessment were provided to me by Cuenca Cigars